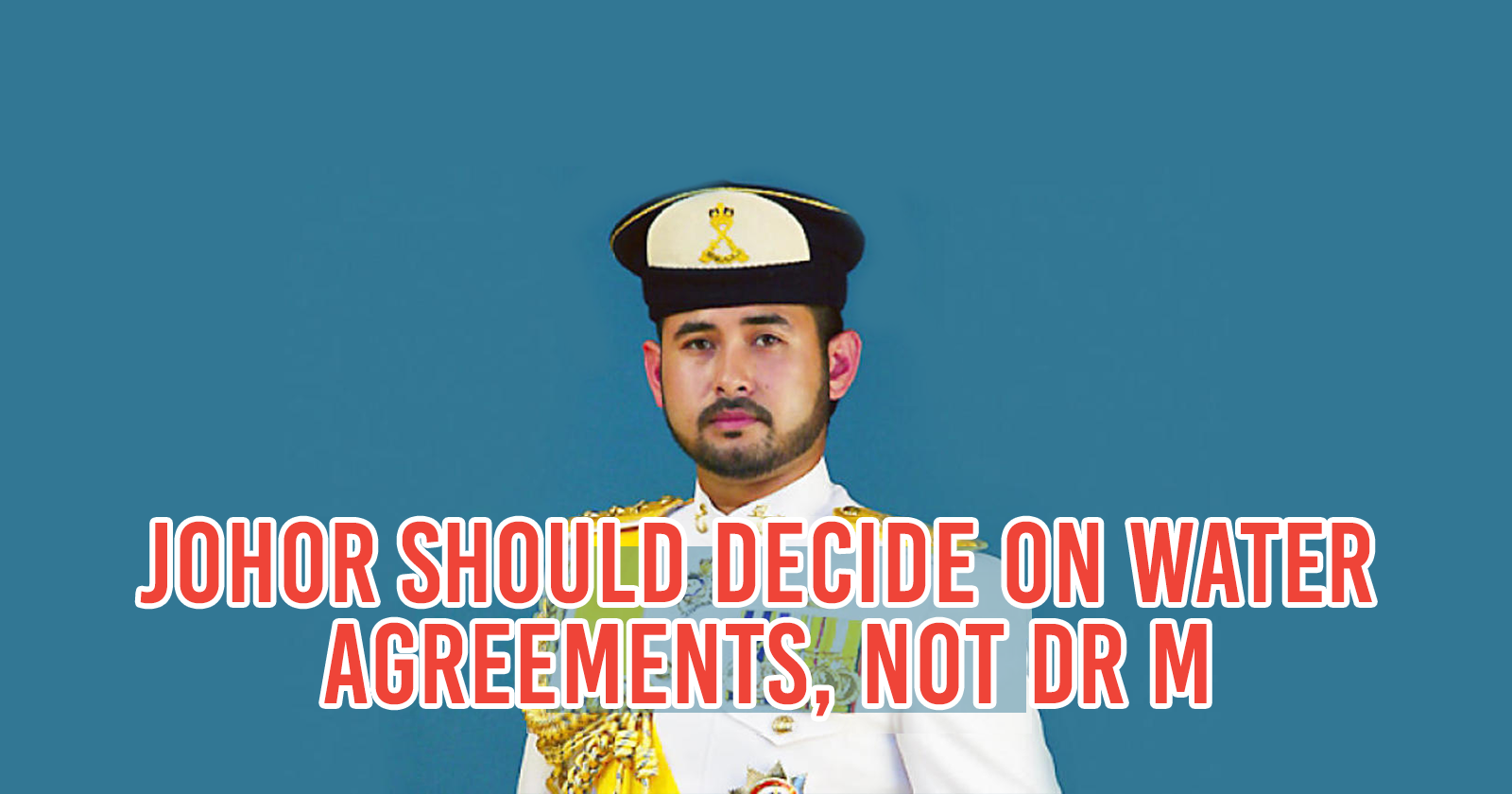 The Johor government should be the one deciding on Malaysia’s water agreements with Singapore – not Dr Mahathir’s administration.

That’s the view of the state’s crown prince Tunku Ismail Sultan Ibrahim. He made these comments in an interview with Channel NewsAsia (CNA), released on Thursday (19 Jul).

Given Johor’s proximity to Singapore, the views and opinions of its monarch matter – especially when he discusses contentious issues like the High-Speed Rail Project and the water agreements.

It matters even more when he disagrees with Malaysia’s Prime Minister on almost all of them:

1. He wants the federal government to back off on water issues with Singapore

At the end of the day, the water in Johor belongs to Johor.

(I prefer) not to have federal interference when it comes to water between Johor and Singapore.

In June, the Johor crown prince took to Twitter to thank Singapore for supplying Johor with treated water during droughts in previous years.

A neighbour and a friend.

Thank you to the Singaporean Government for helping Johor during the drought seasons & when we had our water crisis. We have always helped each other. May the close ties & friendship forged hundreds of years ago last forever.

His comments came after Dr Mahathir announced that he planned to “renegotiate” the 1962 Water Agreement with Singapore.

That agreement decrees that Singapore give 5 million gallons of treated water per day to Malaysia.

But PUB – at Johor’s request – has adjusted this to provide more water when needed. The national water agency claims to have supplied over 16 million gallons per day to Johor over the past few years.

During the 2016 dry season, Singapore supplied over 22 million gallons of water a day to Malaysia. That’s almost 5% of Singapore’s daily total water demand of 430 million gallons.

Given this past assistance, it’s likely that Tunku Ismail doesn’t want Dr Mahathir’s government to pressure Singapore on water issues.

2. He supports the HSR project

I think it’s a very, very positive project that we should continue because it will not only help Johor but also Singapore.

Contradicting Dr Mahathir, Tunku Ismail heaped praises on the High-Speed Rail (HSR). A firm believer in the project’s benefits, he said, “We should proceed and continue (with the HSR), that’s my personal opinion.”

Considering that 3 of the 6 proposed HSR stops were in Johor, the cancellation – or even ‘deferment’ of the project – might adversely impact the state’s economy.

“No matter what decision will be made, it should be a win-win situation”.

The many vehicles crossing the the Causeway every day show how important Singapore is to Johor. Many Johor residents work in Singapore for higher wages, which means that they are able to spend more back home. And Singaporeans regularly cross the Causeway as well, heading to Johor to shop, play and work.

These factors have helped the state become the fastest growing in Malaysia – with a 5.7% GDP growth rate in 2017.

The state has the most to lose in the event of colder Singapore-Malaysia ties. The Johor crown prince, who is acutely aware of this, repeatedly stressed the need for mutually beneficial development and called for a warmer relationship with Singapore.

Will his words change anything?

While Malaysia’s royal families exercise influence in matters of religion, they have little say in governance – both in their states or Malaysia as a whole.

And they’re likely to have even less weight on Dr M, who has a chequered history with the Johor sultanate. During the Malaysian elections, Tunku Ismail launched a veiled attack on Dr M, calling him a “forked tongue” man.