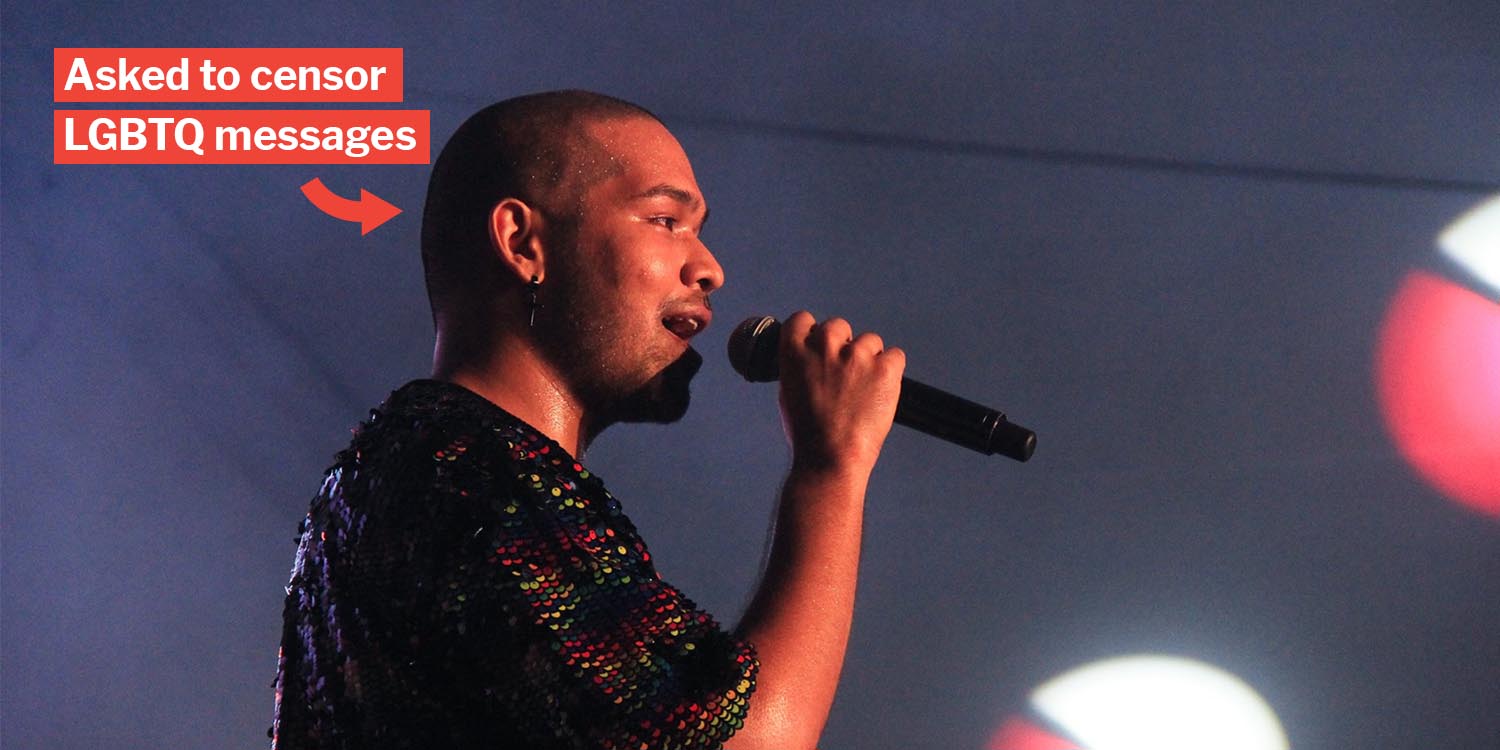 Standing up for your beliefs & risk losing important opportunities is the hardest thing to do sometimes. For radio DJ Mr Joshua Simon, standing his ground lost him an opportunity to address Singaporean students on important issues.

He had to give up his TED (technology, entertainment, design) Talk at a polytechnic after the school found out his talk will include LGBTQ+ themes. 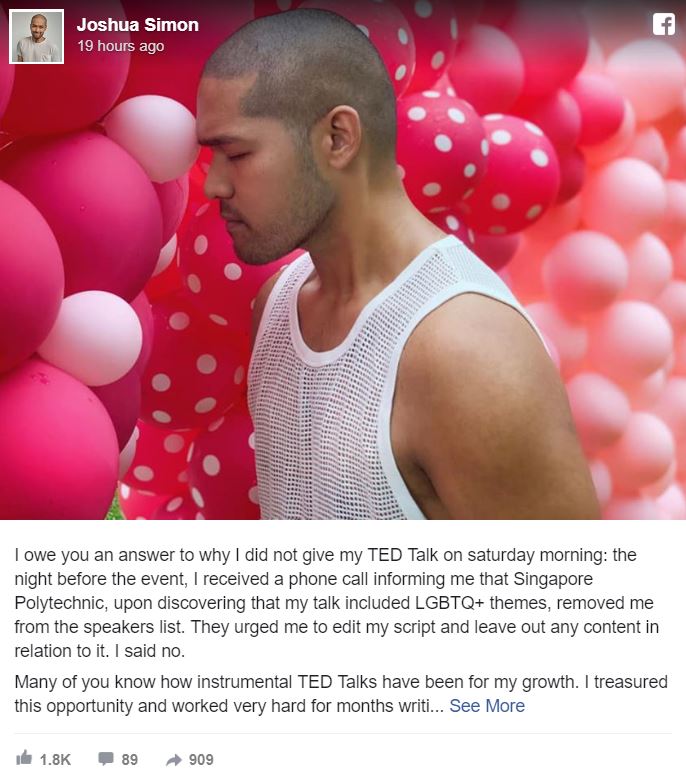 Despite the school asking him to censor the themes in question, he refused to change his script.

Mr Simon, 29, who deejays for Kiss92 FM, was expected to give his TED Talk containing LGBTQ+ messages on Saturday (29 Jun) morning.

But the night before the event, he received a phone call informing him that the organisers removed him from the speakers’ list after finding out about the messages.

They urged me to edit my script and leave out any content in relation to it. I said no.

He refused to give in.

Against his principles to change ex-boyfriend’s gender

Although Mr Simon shared that he had worked “very hard for months writing & rehearsing for it”, flipping the gender of his ex-boyfriend in his talk was against his principles.

He didn’t want to leave out his coming out story to his father either. Both “are, and will always be, defining moments” of his story. He espoused,

To hide my struggles & sacrifices is to be ashamed of them. To honour my story is to be completely vulnerable on that stage.

Hence, he won’t do the talk.

Mr Simon believed that censoring his script would “set a hurtful precedence” to the next LGBTQ speaker.

He refused to allow anyone to say, “if Joshua Simon cut that out of his speech, so can you.”

School apologised, said they must abide by MOE rules

On Sunday (30 Jun) morning, Mr Simon said the school formally apologised to him for the discretion because they had to follow rules set by the Ministry of Education (MOE).

Although he appreciated the gesture, he simply needed time to be himself.

He ended the post on a poignant note, saying “This becomes part of my story now. Our stories matter. The fight to have them told continues.”

Applauded for staying firm in his beliefs

Netizens are all praise for Mr Simon’s fortitude, encouraging him to continue standing up for his values because “they are strong, real, just and so important.”

This netizen, on the other hand, served “shade” piping hot, after PM Lee’s declaration last week.

PM Lee had said that Section 377A – the law that criminalises gay sex – has “not stopped people from living.” Ooh.

Mr Simon, who is also a singer-songwriter, is well-known for his inspiring singles that chronicle his journey. He is unapologetic for his personal struggles & stories, especially given his sexual orientation.

With steely determination, he told Bandwagon Asia earlier this year that he is at the point in life where he has absolutely no shame in what he’s singing about.

He refuses to shy away from the truth by refusing to say “she” in his songs, when it’s a “he”.

The fight against discrimination continues

It’s a shame that Mr Simon was stopped from sharing his stories the way they were — all during Pink Dot 2019 weekend, no less. 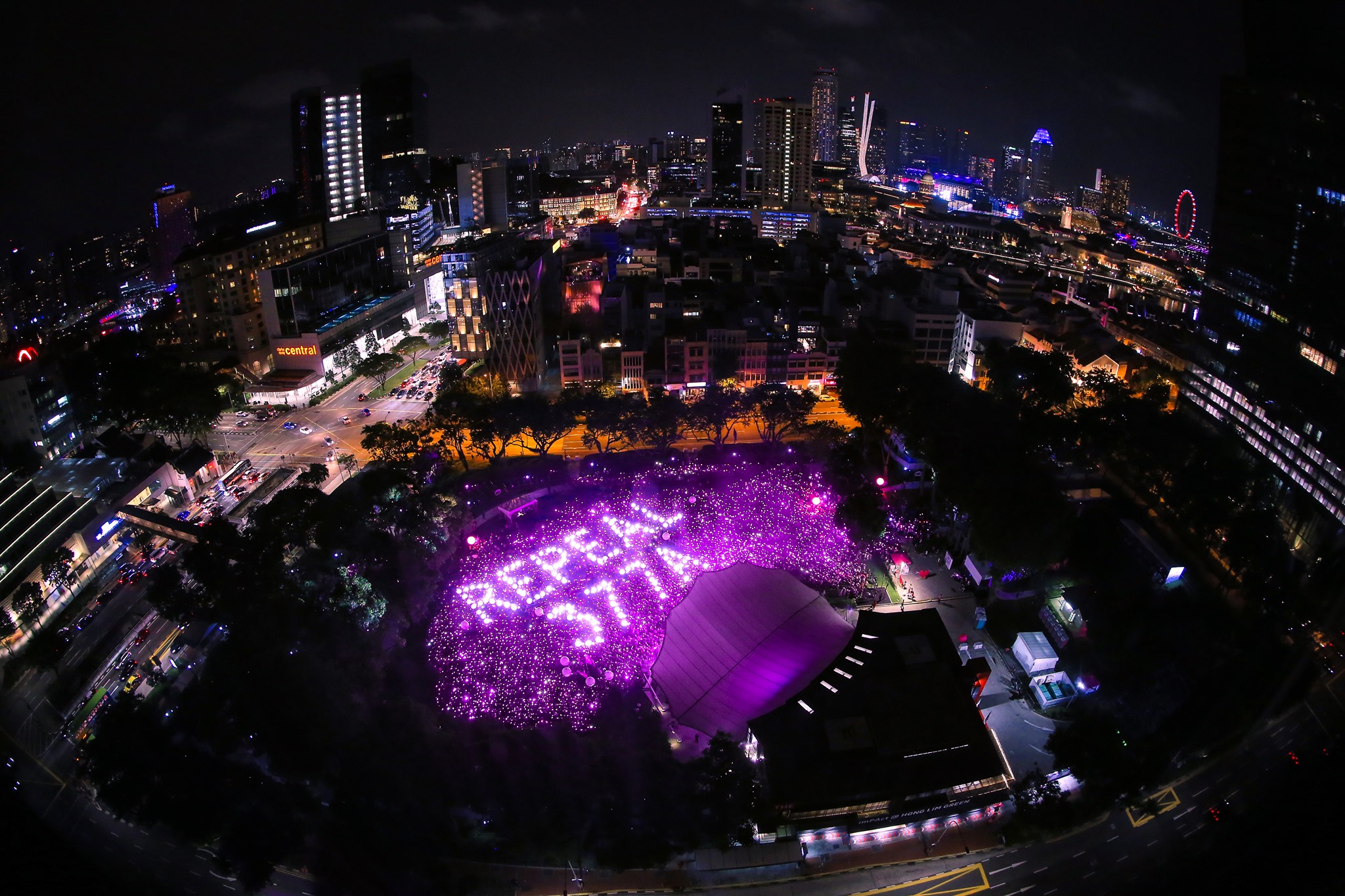 While LGBTQ+ rights & the controversial 377A continue to be the bone of contention among various communities across the nation, the voices of LGBTQ+ people are becoming louder by the day.

With Pink Dot 2019 & people like Mr Simon standing up for LGBTQ+ rights, we can’t help but wonder if change will come to Singaporean society one day.