Jurong Bird Park Has S$10 Tickets Till 3 Jan, Visit Soon Before It Closes 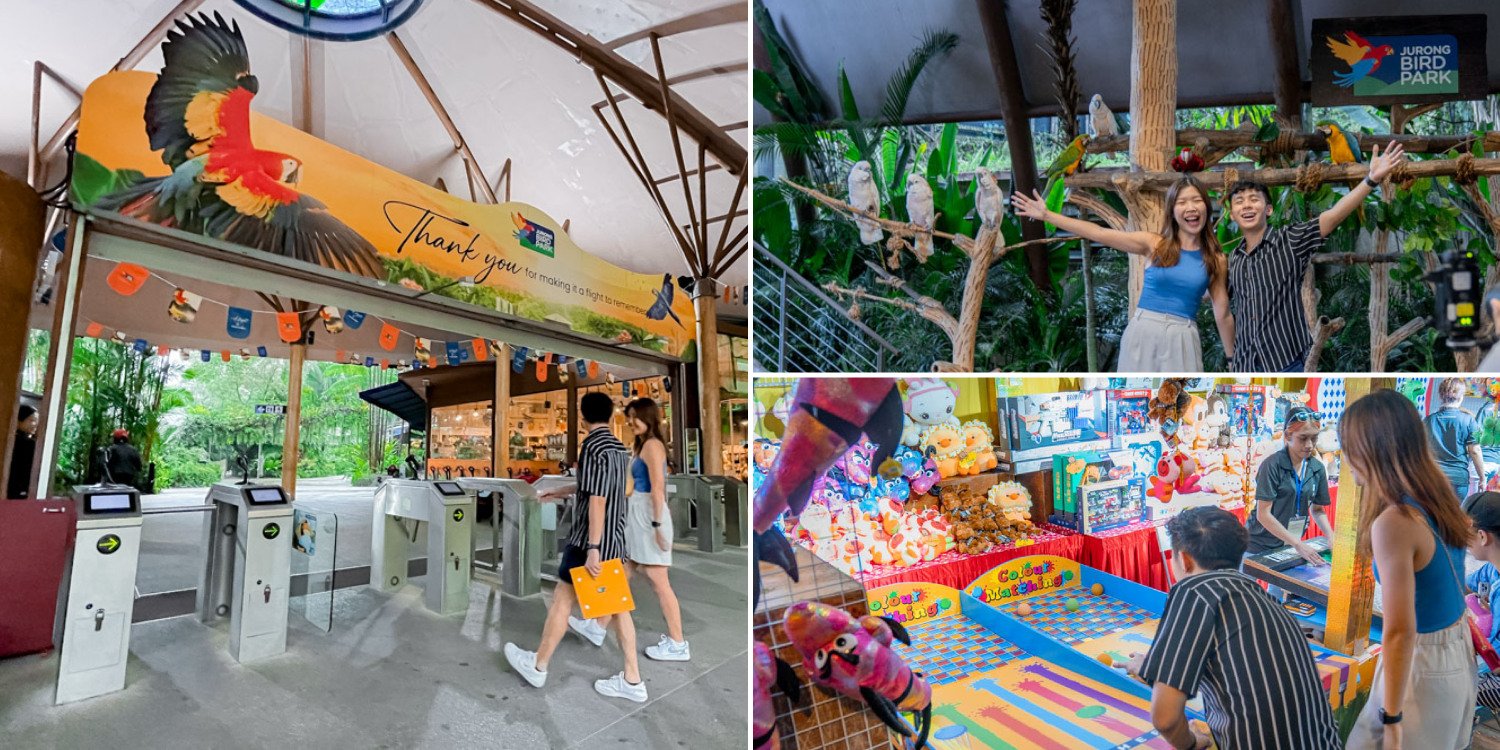 Flock to a fun carnival with the entire fam.

By now, you’ve probably heard that Jurong Bird Park, where Singaporeans have made fond childhood memories since the 1970s, is closing its doors for good after over 50 years of operations.

Come 2023, it will be known as Bird Paradise and have a new nest in Mandai Wildlife Reserve alongside Singapore Zoo, River Wonders, and Night Safari.

Jurong Bird Park Closing After 52 Years, Will Relocate To Mandai After 3 Jan 2023

To let fans say their goodbyes, the park has lined up a bunch of fun activities and promotions, including S$10 admission tickets and a fun carnival for the whole family.

Just in time for the year-end school holidays.

Growing up in Singapore, chances are your parents would’ve brought you to Jurong Bird Park to marvel at the colourful macaws, majestic birds of prey, and adorable penguins.

After 3 Jan next year, the park will be shutting its doors in preparation for its migration to Mandai Wildlife Reserve. Bird Paradise will take flight in the second quarter of 2023 and house 3,500 birds from over 400 species. 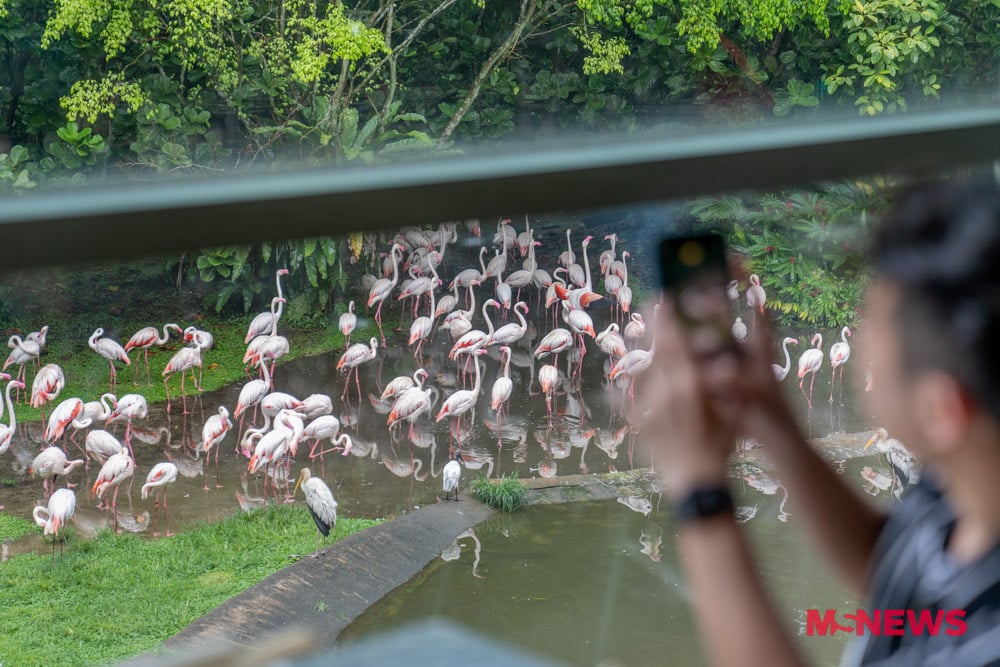 But before the old park closes, it’ll go out with a bang.

From now till 3 Jan, loads of special activities will be lined up for visitors to let them create new memories at the beloved attraction while fondly reminiscing about the past.

Kids and grownups alike will have a hoot at Celebration Caw-nival, which takes place from 17 Nov to 2 Jan at Birdz of Play and Penguin Coast. 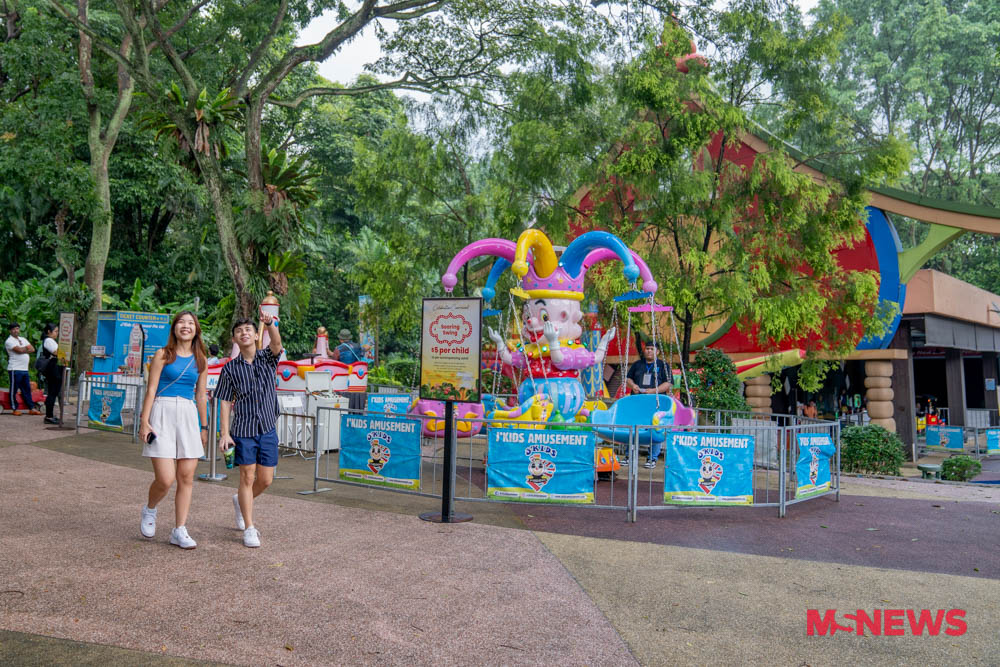 There, you’ll find all sorts of exciting rides like a Bouncy ‘Parrot’ Ship and Teacup Carousel, as well as games like Hit-a-Target and Roll-a-Ball. If the little ones can’t stop crowing about wanting to go back to the Caw-nival, you’ll be happy to hear about Jurong Bird Park’s Final Flight Special.

From 19 Nov till 3 Jan, admission tickets will cost just S$10 for all Singapore residents with a valid WildPass, which is free to sign up for.

That’s less than one-third of the usual rate of S$34.20 for adults and half the S$22.50 price for children. With such a good deal, you’ll probably find yourselves flying down to the park every weekend.

Count down to park’s closing at Instagrammable spots

As a place that’s been in business for over five decades, generations of locals and tourists have flocked to Jurong Bird Park for a fun day out, making tons of treasured memories. 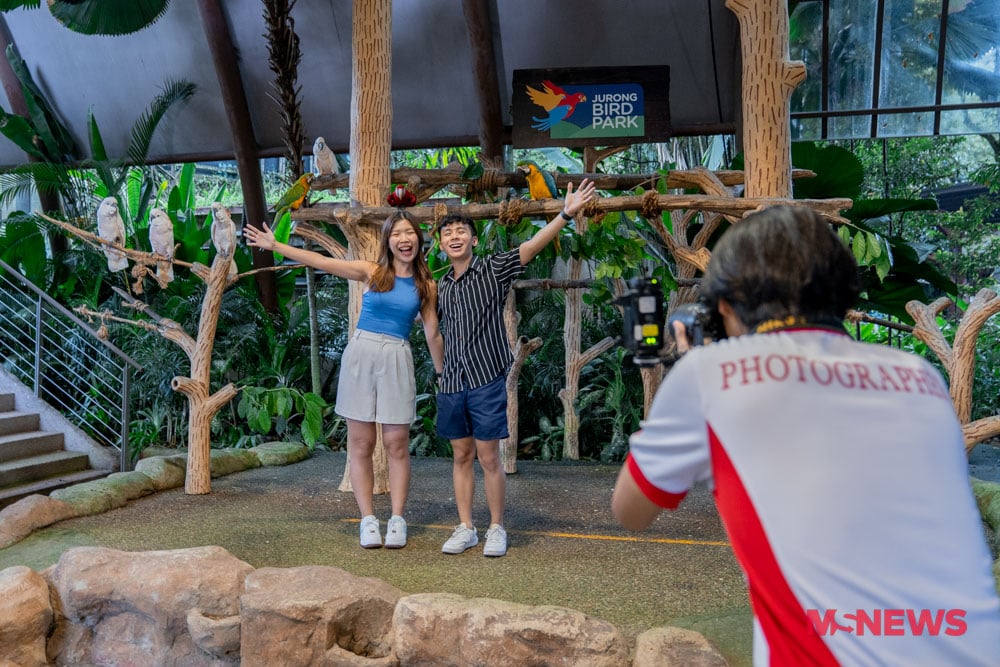 You’ll want to make plenty more when you drop by over the next two months, and one way to commemorate them is by taking lots of photos. After all, it’ll be your last chance to do so.

Guests can pose for a precious memento at an Instagram-worthy photo point that counts down to the park’s closing. 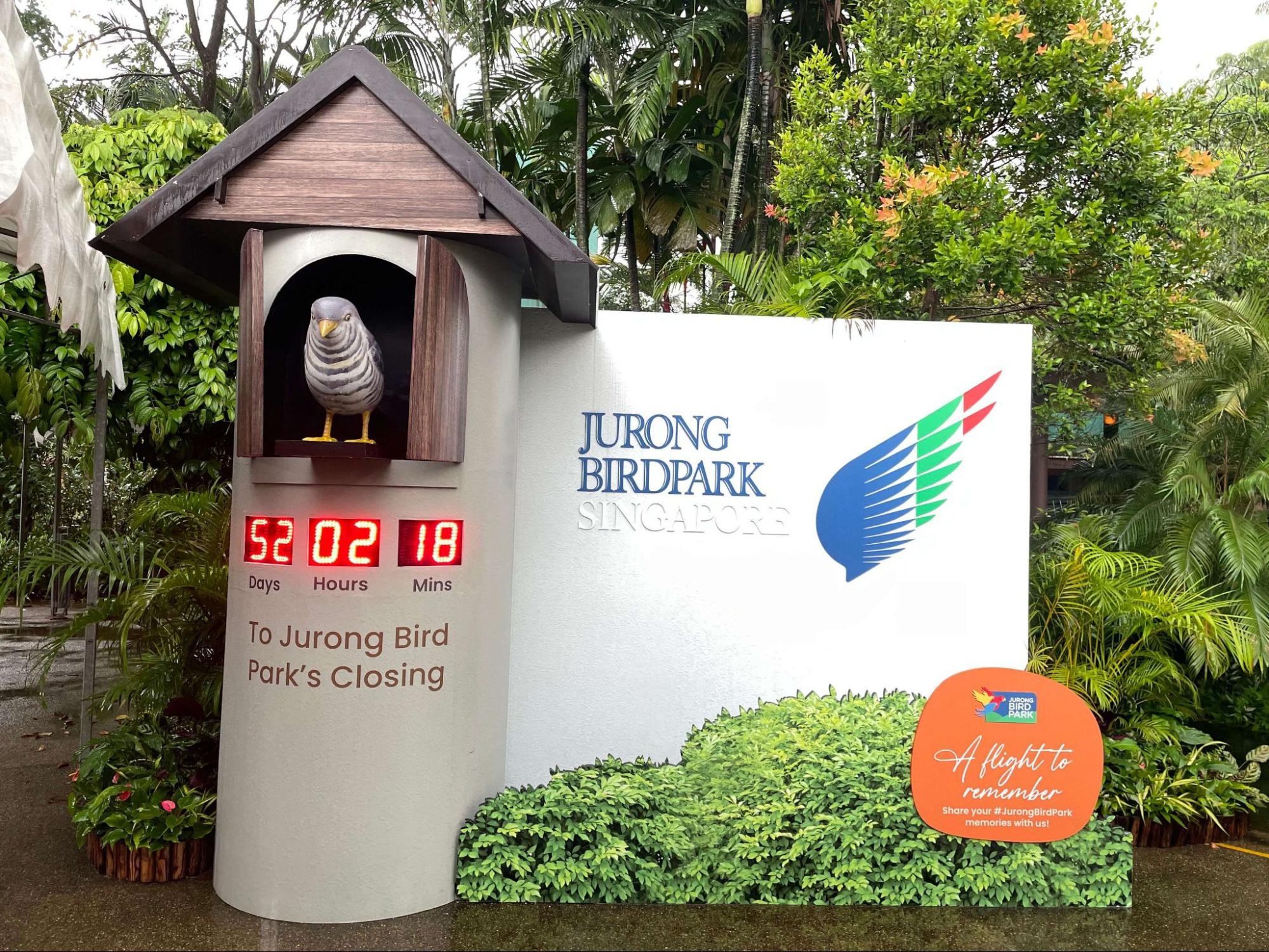 There will also be a real-time memory wall where they can share and look back on their favourite moments at the park. You might shed bittersweet tears as you recall past visits with your grandparents or dates with your secondary school sweetheart.

Remember the old Panorail? While it’s no longer in operation, you can still check out its 2D replica and a video screening of the park’s highlights. 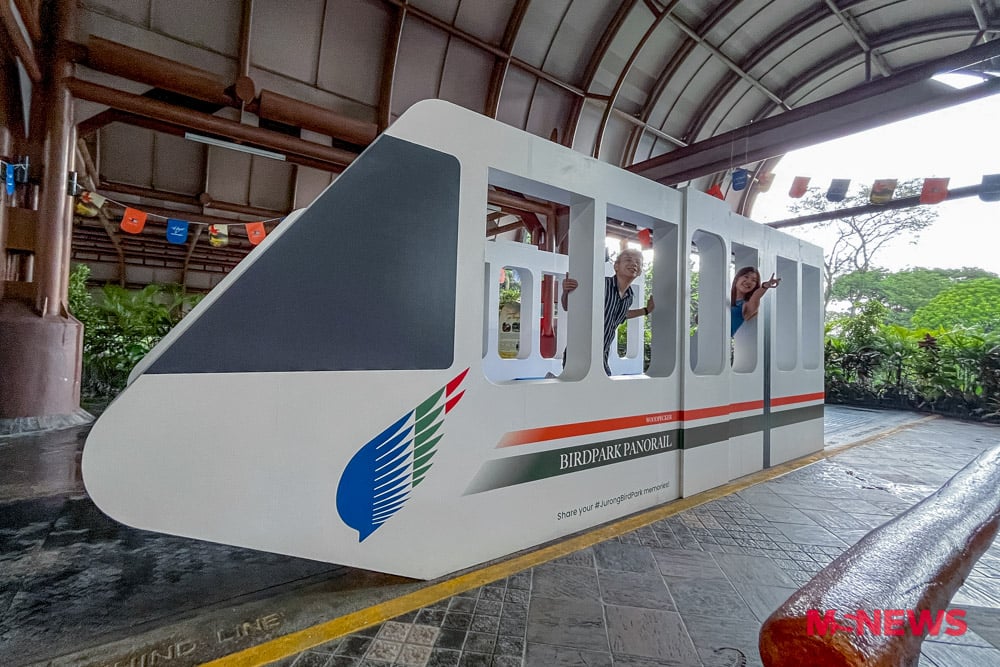 If you had the chance to hitch a ride on the Panorail before it stopped running in 2012, this will definitely bring back tons of memories. If you’ve got extra cash to spare, consider signing up for the Nostalgic Signature Tour.

At S$400, you can hire a private buggy for yourself and up to six other people to explore the park with your own specially curated handbook and have up-close encounters with its feathered superstars. Friends of Wildlife members can enjoy this tour at 30% off. When the day comes to an end, take home a commemorative photo of yourself posing alongside your favourite birds, as well as a limited edition Jurong Bird Park medallion. 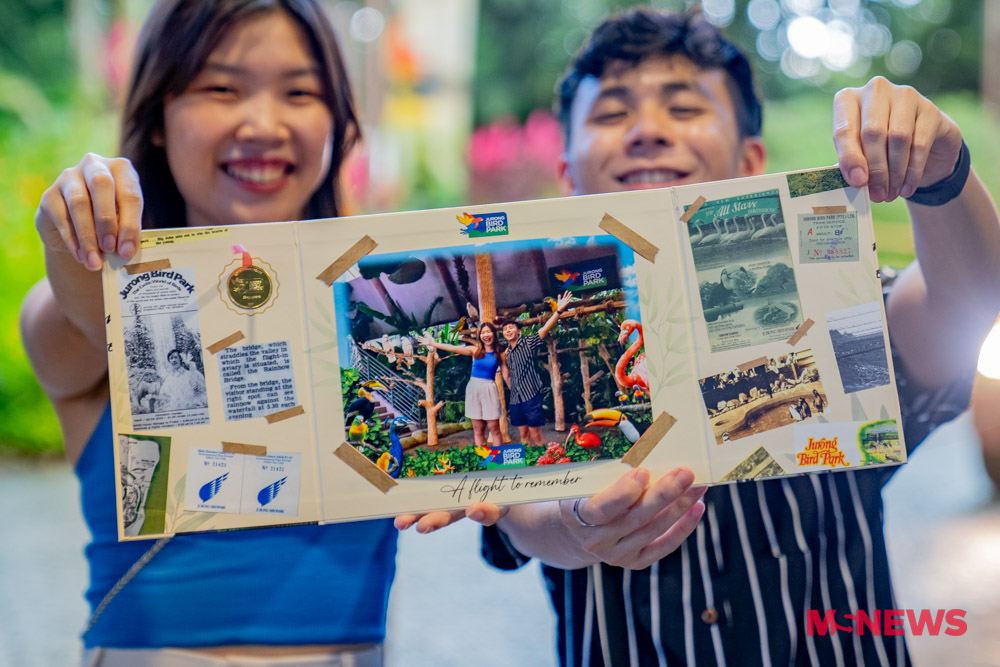 These keepsakes will become even more valuable once the park is gone.

Visit Jurong Bird Park before it sings its swan song

With an admission price that’s a lot more affordable, more Singaporeans can now visit Jurong Bird Park as many times as they’d like before its swan song.

The S$10 tickets are now available for purchase hereherehere. Then, once you’ve made your booking, you can start planning your trip – or should we say, trips – to the park:

From 19 Nov to 3 Jan, there’ll also be a free shuttle bus that runs at a 10-minute frequency between the park and Jurong East MRT station daily. Here are the times to take note of:

The end of an era & the beginning of a new one

The shuttering of such an iconic attraction feels like the end of an era, but it’s not completely goodbye since they’ll be reopening in a different location.

Here’s hoping that the park soars to even greater heights in its new home.

What are some fond memories you’ve had in the park? Let us know in the comments.

This post was brought to you in collaboration with Jurong Bird Park.