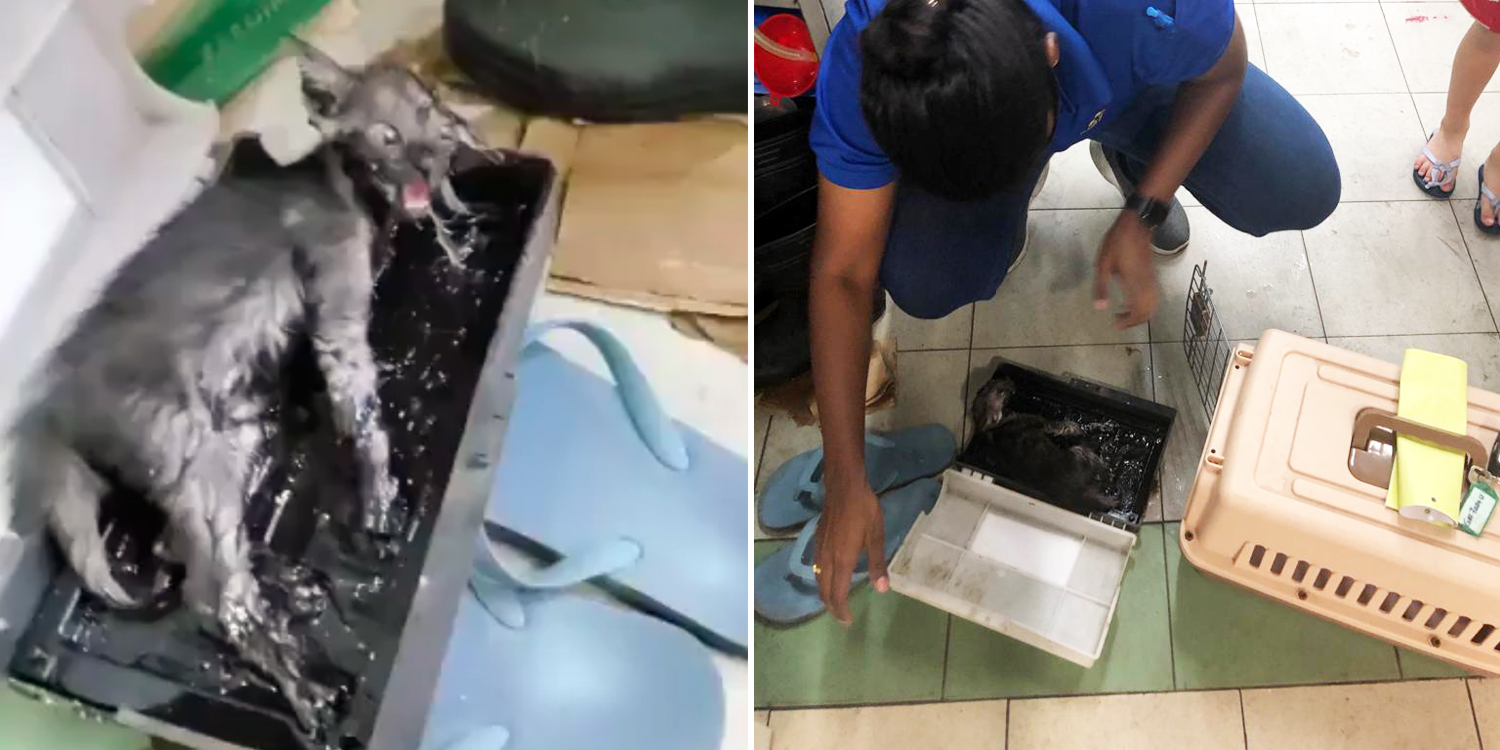 The kitten was reportedly trapped for about 7 hours.

We often see cats roaming about the streets of Singapore venturing into different nooks and crannies.

But on Sunday (27 Feb), an adventurous kitten found itself in a literally sticky situation when it got stuck in a glue trap at Tampines market.

The poor kitten was later found by a resident after it had been trapped for 5 long hours.

Folks from the Society for the Prevention of Cruelty to Animals (SPCA) were subsequently alerted to the situation and proceeded to rescue the feline.

Responding to the situation, an Animal Concerns Research and Education Society (ACRES) spokesperson called for regulations on glue traps, saying it is one of the “cruellest forms of animal abuse”.

At around 9.30am on Sunday (27 Feb), the resident heard the kitten’s weak cries and found it stuck in a glue trap at Wet Market @ Tampines Street 81.

According to Coconuts, the poor kitten was terrified when it was found. Its eyes were bulging as it meowed weakly from the exhaustion of trying to free itself. 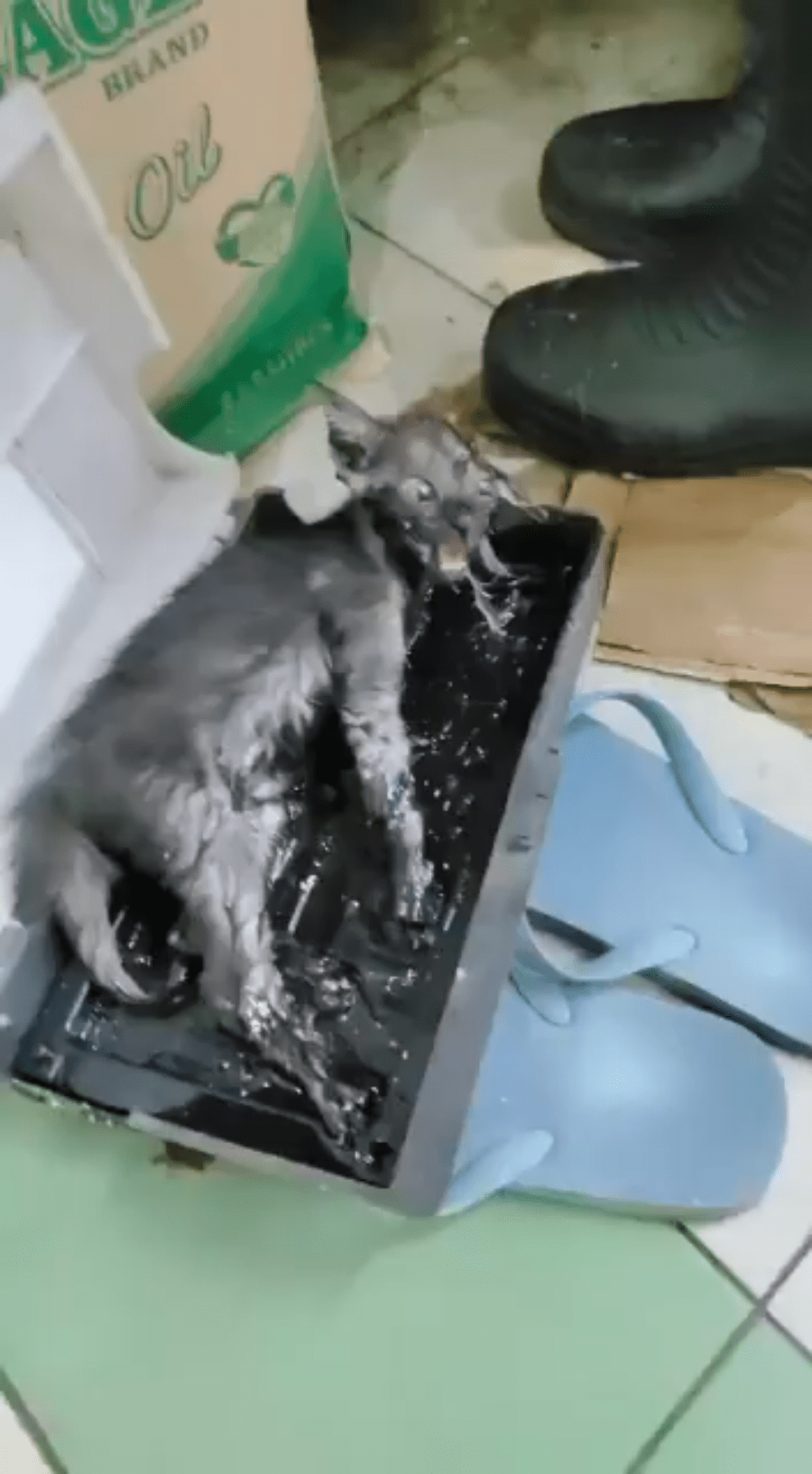 The resident recognised it as the 3-month-old kitten of a neighbourhood community cat.

By the time it was discovered, it had been trapped for about 5 hours and covered in sticky adhesive from head to tail. 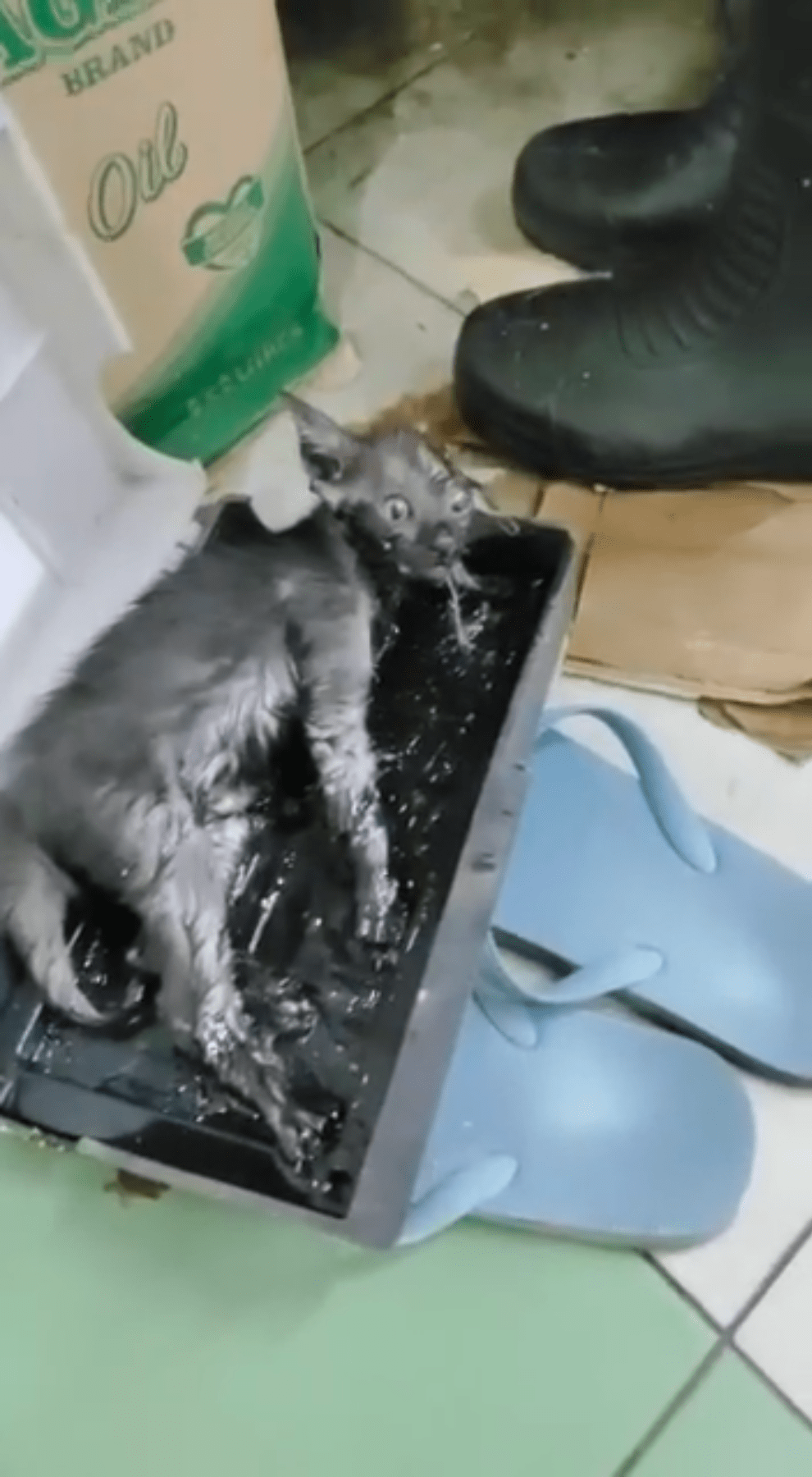 The resident filmed a video of the heartbreaking scene and sent it to another resident, Grace Chai, who shared it on Facebook.

Ms Chai then alerted SPCA to the ensnared kitten at about 11.20am. About an hour later, a rescuer arrived at the scene.

The kitten was then brought back to SPCA’s rescue centre and finally freed from the glue trap. It is now recovering there. In total, the kitten was trapped for about 7 hours, reported Coconuts.

Other animals also stuck in such traps

The glue trap was initially placed at the market to catch rats.

Speaking to Coconuts, Ms Chai said she felt glue traps should be banned. There have apparently been past reports of snakes, cats, and birds stuck in such traps.

The resident has also reached out to Tampines MP Desmond Choo about the incident. He has since promised to discuss the matter with the Tampines market’s management.

ACRES co-chief executive Anbarasi Boopal shared with Coconuts that glue traps are one of the cruellest forms of animal abuse.

She continued that when a rodent, community, or wildlife gets stuck in glue traps, they experience extreme stress and fear.

They also face the possibility of dying from dehydration, starvation, or even self-mutilation from trying to escape.

While ACRES has been successful in rescuing many animals in such situations, not every animal is cleaned well enough to be able to survive in the wild.

To tackle rodent infestations, Ms Boopal said property managers should address the root causes of the infestation – such as food availability – rather than using glue traps.

This will, however, take sustained efforts from all residents in the estate such as observing better hygiene practices.

Whatever it is, it is not an excuse to consciously let animals suffer by using glue traps.

Ms Boopal also shared her hopes that regulations will be introduced to limit or control the use of glue traps.

We’re glad the kitten was discovered by residents and eventually freed from its long ordeal.

Such incidents, like the many that came before it, definitely put the use of such glue traps into question.

Rather than awaiting regulation, we hope property management and residents can consider other more humane options when dealing with pests and refrain from using such traps.

Featured image adapted from Grace Chai on Facebook and Coconuts.