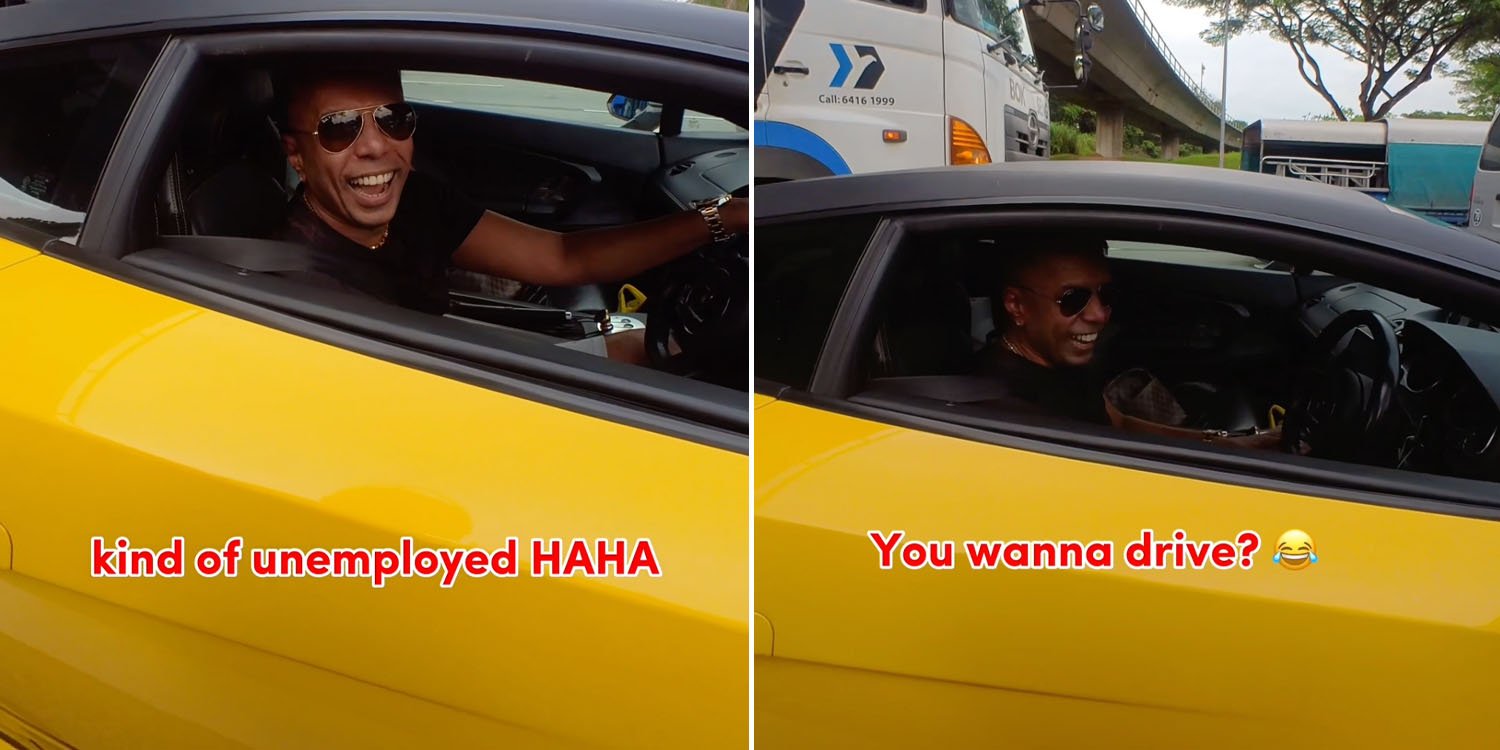 We stan a humble king.

We often think of people who drive fancy cars as snobbish individuals, but a Lamborghini driver in Singapore is proving that stereotype wrong.

On 7 Aug, a TikToker who rides a motorcycle filmed a video of the Lamborghini driver at a traffic light junction in Yishun.

Singapore Edition: What do you do for a living? He’s definitely one of the friendliest owners I have met!

When asked what he does for a living, the driver laughingly said he’s “kind of unemployed”.

The video went on to garner over 1.5 million views on TikTok, with the driver winning netizens over with his casual attitude and humble good vibes.

The video starts off with the TikToker, username @koocester, approaching the yellow Lamborghini Gallardo car on his bike.

As he pulled up beside him, he gestured to the driver to roll down his windows.

The TikToker then said that he loved the car, asking the driver what he does for a living.

Smiling, the driver replied, “I’m kind of unemployed”, before bursting into laughter. 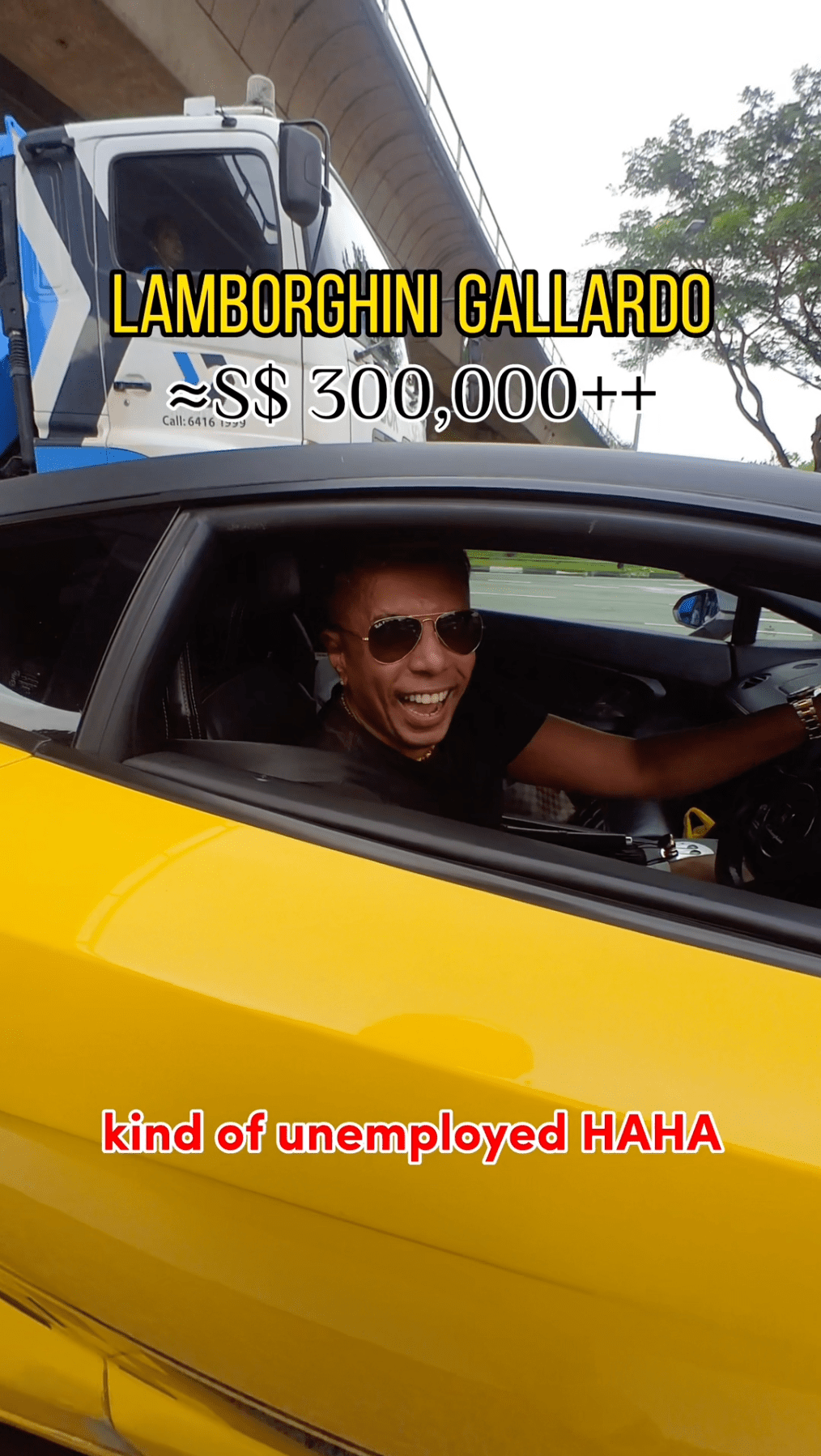 Taking the reply in his stride, the TikToker pressed on, asking the driver what he worked as to afford the Lamborghini.

With a smile on his face, the driver revealed that he used to work in the construction industry. 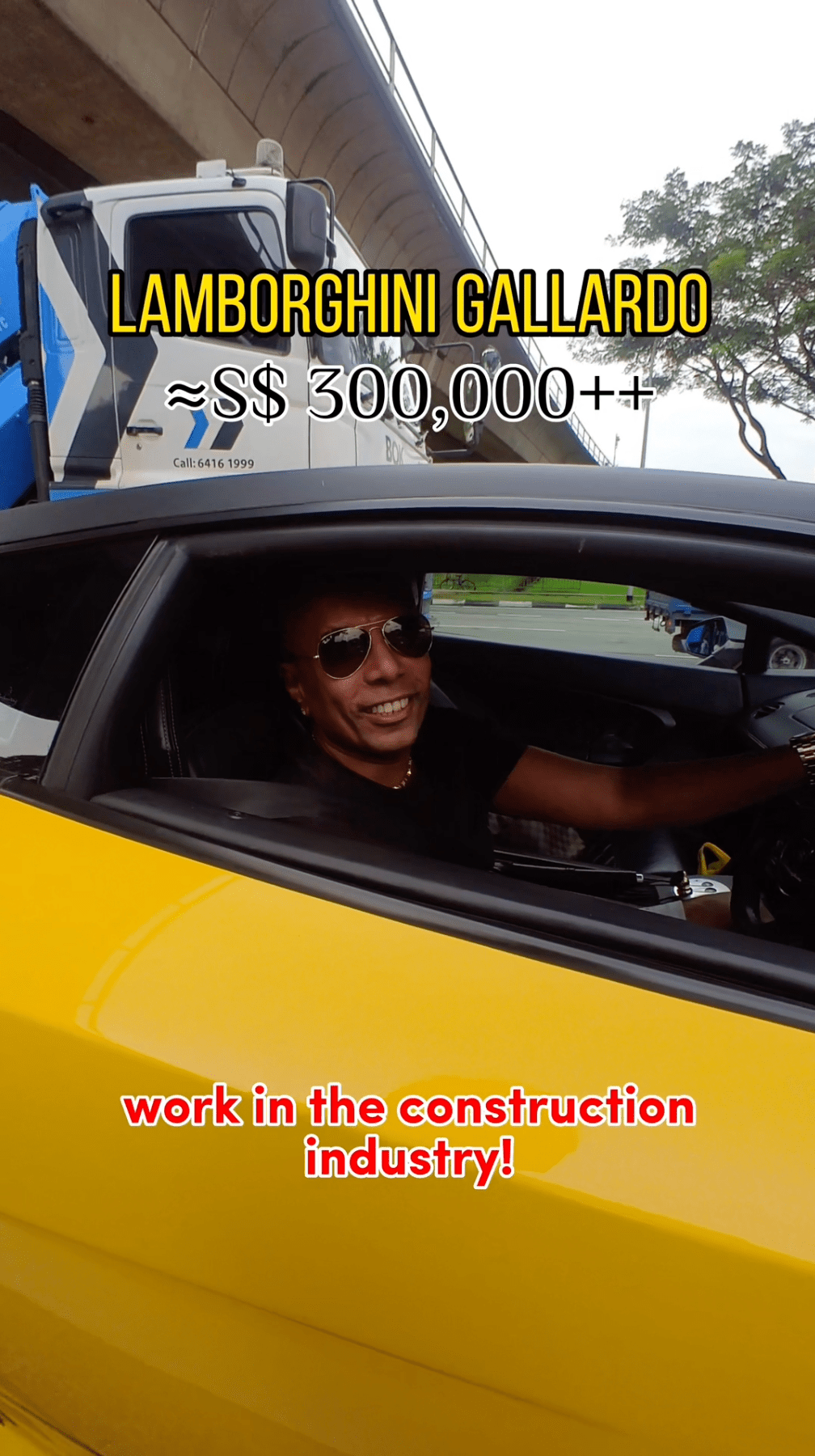 One of the friendliest drivers TikToker met

The TikToker exchanged a friendly fist bump with the driver on hearing his reply. 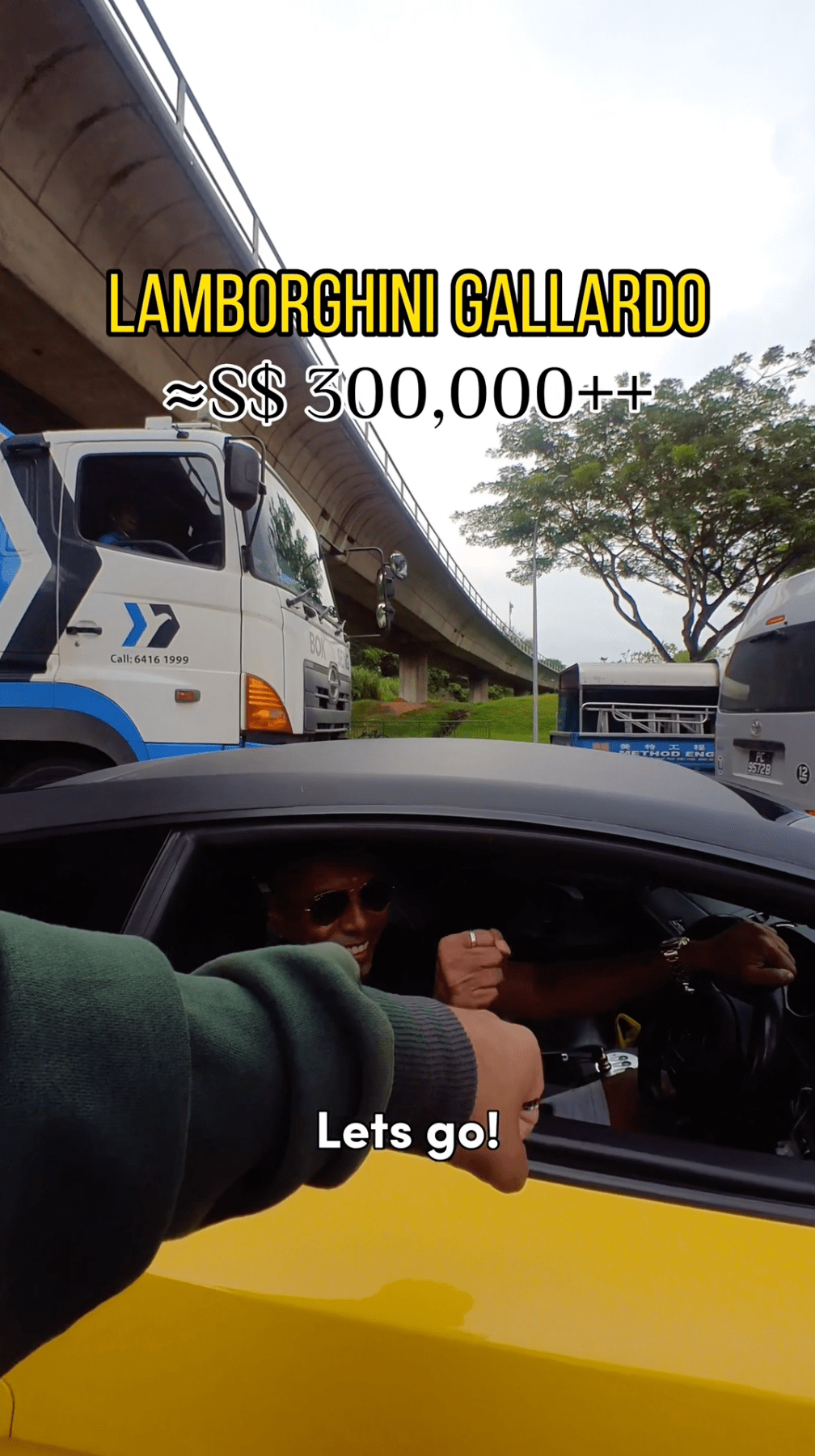 He then asked for permission to post the video on TikTok.

After some convincing, the driver agreed but not without shyly covering his face, laughing the whole time. 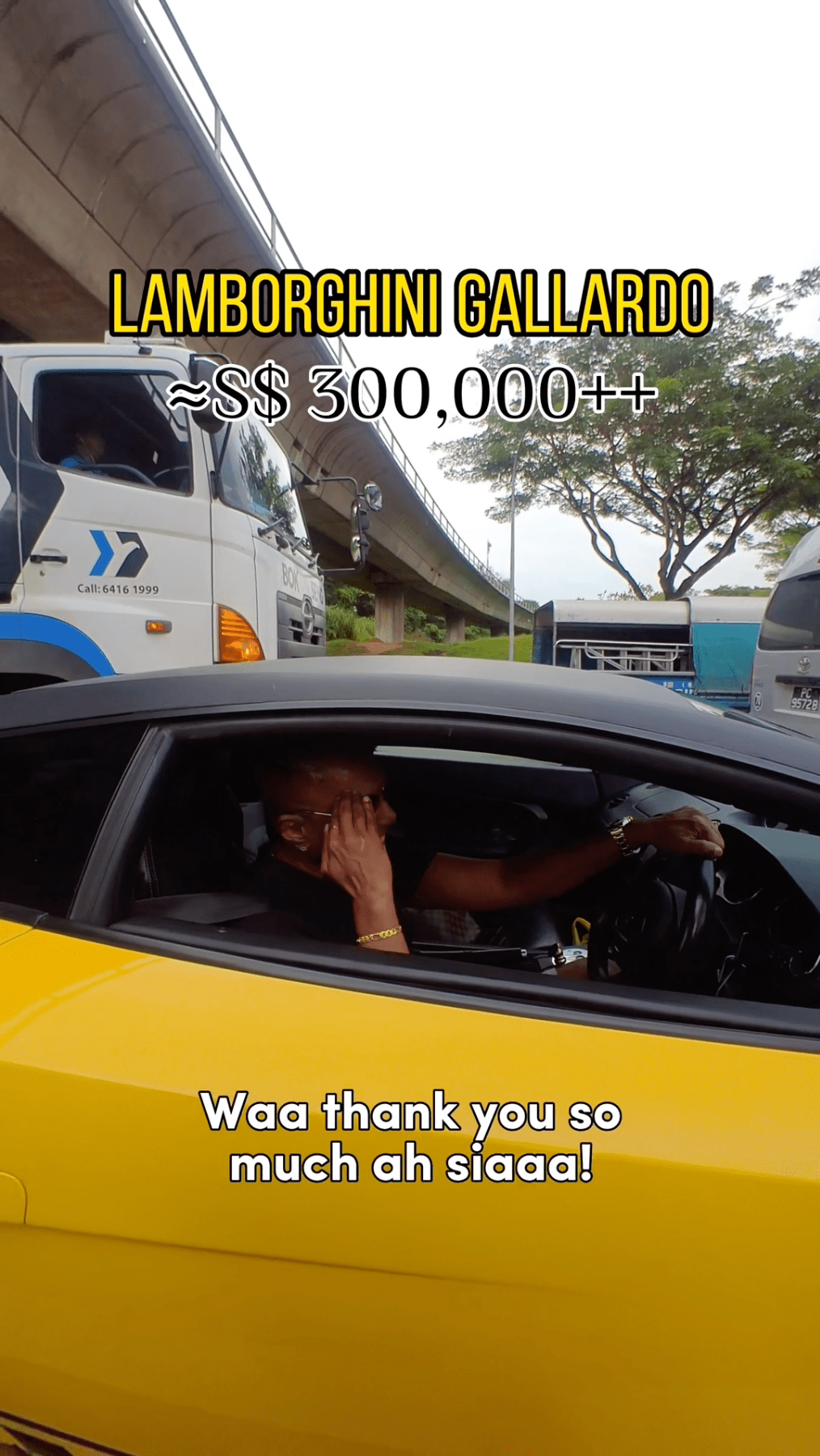 When the TikToker complemented the car again, he readily said ‘thanks’ repeatedly.

Before they bade farewell, the driver even jokingly asked the TikToker, “You wanna drive?”

The TikToker later wrote in his caption that the driver was one of the friendliest he has ever met.

According to the TikToker, the Lamborghini Gallardo costs upwards of S$300,000. But commenters had informed him that that is the price of a used Gallardo. A brand new one will cost much more.

However, Lamborghini has stopped manufacturing the Gallardo since 2013.

Wins netizens over with humbleness

The TikTok video garnered over 1.5 million views, with many won over by the driver’s humbleness.

Others swooned over the driver, saying he is rich and has a good attitude.

Some even commented that he was Singapore’s very own Andrew Tate — a former British- American kickboxer and now TikToker.

Tate is now a highly controversial figure and is known to have a showy supercar collection.

We often judge and stereotype those that drive flashy sports cars.

But the TikToker and Lamborghini driver’s wholesome interactions have truly shown that we should never be too quick to jump the gun.

Sometimes, all it takes is a casual conversation to break down the walls and share a good laugh.