Lightning Rips Through S’pore Sky, Like Strands Of Fried Bee Hoon Falling In The Night 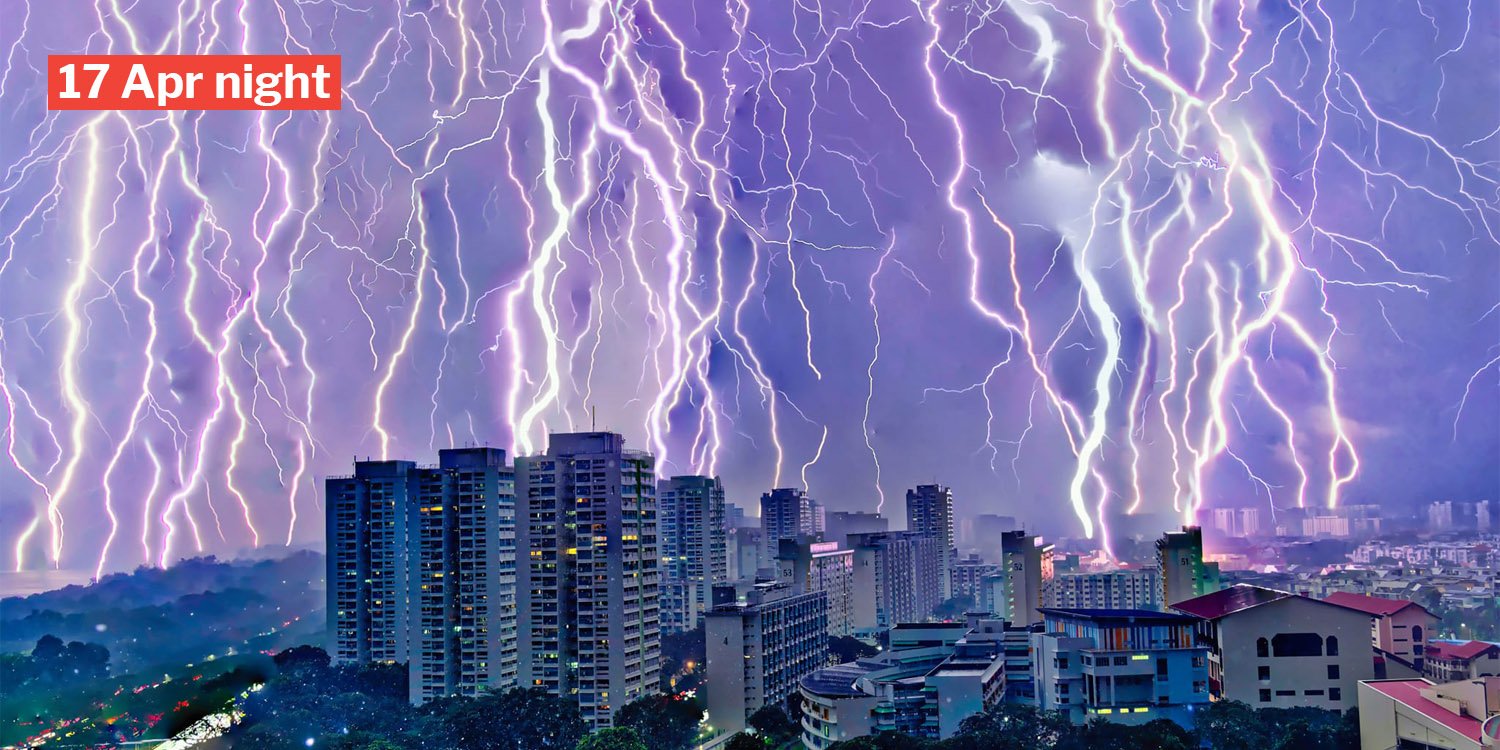 Over 40 lightning bolts seen in the span of 30 minutes in the East.

Lightning Rips Through Singapore Sky During Thunderstorm On 17 Apr Night

Singapore has been experiencing erratic weather lately, often having sunny days coupled with thundery showers. Last Sunday (17 Apr) happened to be one of them.

Whether you loved it or hated it, there was one silver lining. Or rather, many silver linings in the form of electrifying lightning bolts.

And photographers all over Singapore were quick to capture this stunning light show. 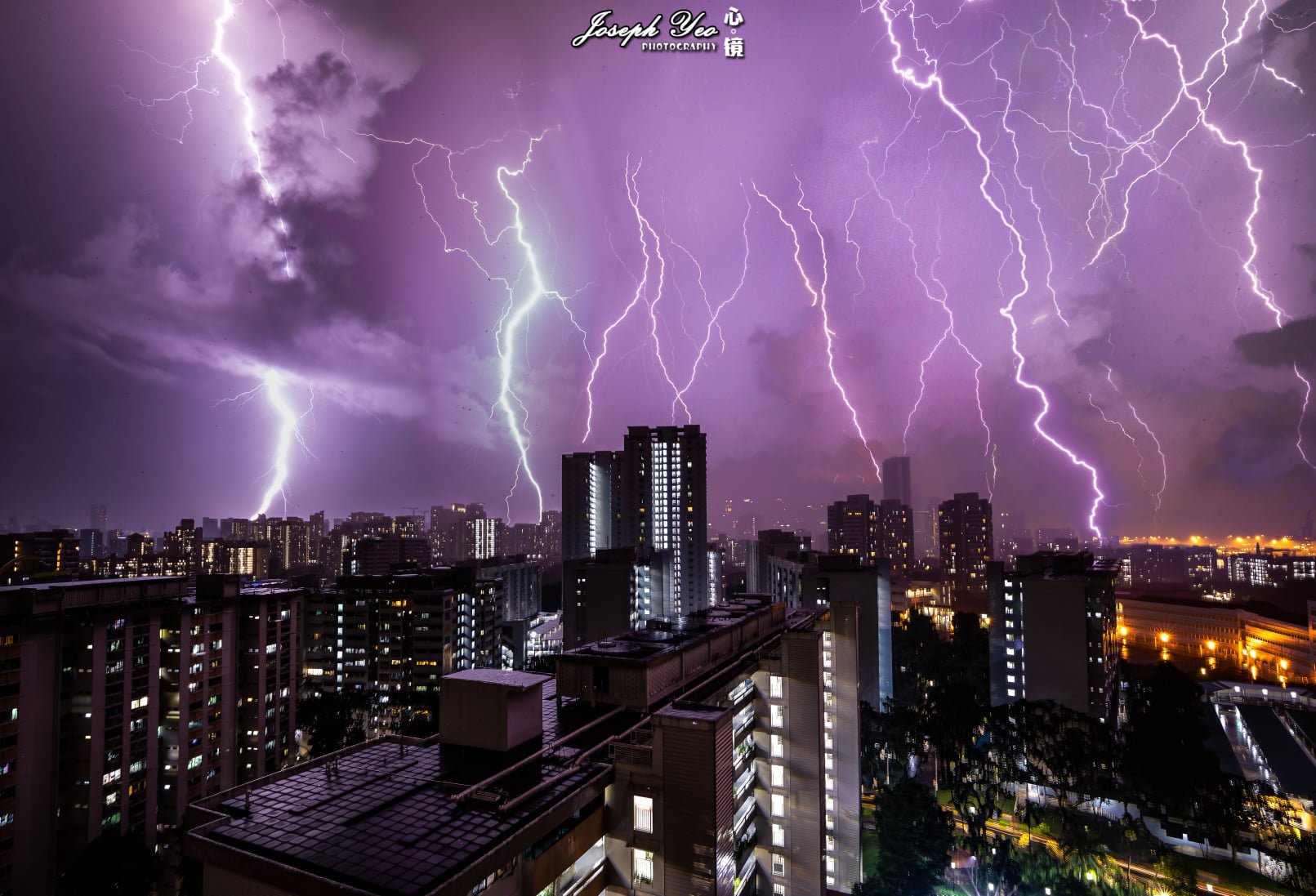 If you spent the night comfortably curled up in bed and hiding from the storm, here are some photos from social media to show you just what you missed.

Photo of over 40 lightning bolts captured in the East

Shortly after the sunset painted the skies a comforting orange hue on Sunday evening (17 Apr), a thunderstorm soon descended on Singapore.

With that came a stunning and lengthy lightning display.

Over in the Marine Parade area, a photographer managed to get this spectacular composite shot of multiple lightning strikes. 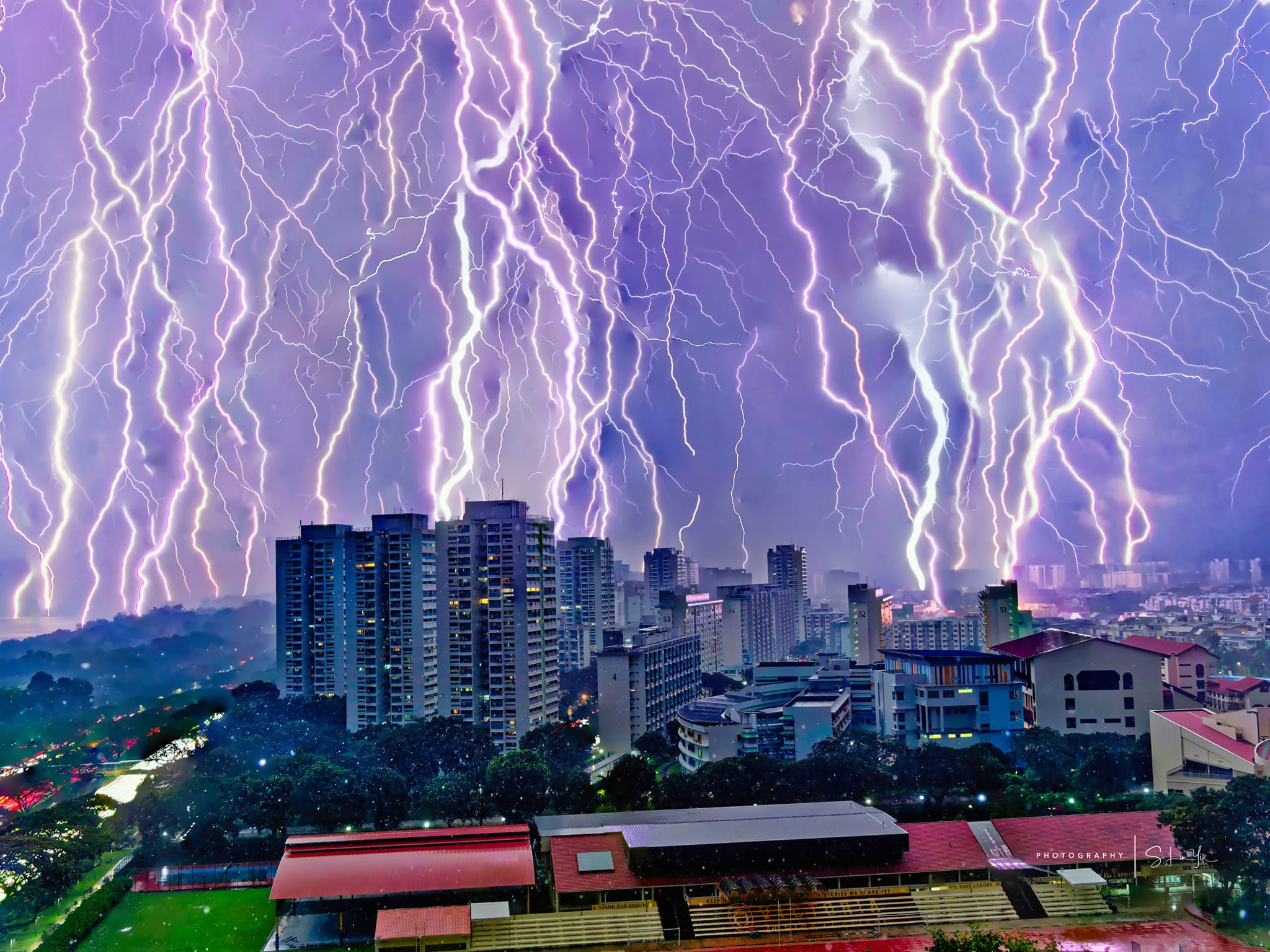 In his Facebook caption, he shared that it was a “crazy night”, and this was captured in 30 minutes, between 8.40pm and 9.10pm.

During that time, there were reportedly over 40 lightning bolts. They were so numerous that the photographer compared them to strands of “fried bee hoon” falling from the sky.

His photo amazed other netizens, garnering over 1,900 shares and counting.

Lightning streaks across skies in central Singapore on 17 Apr

The lightning show was also seen in the central regions of Singapore.

A photographer in Toa Payoh managed to catch this shot of lightning bolts streaking across the night sky in his neighbourhood. 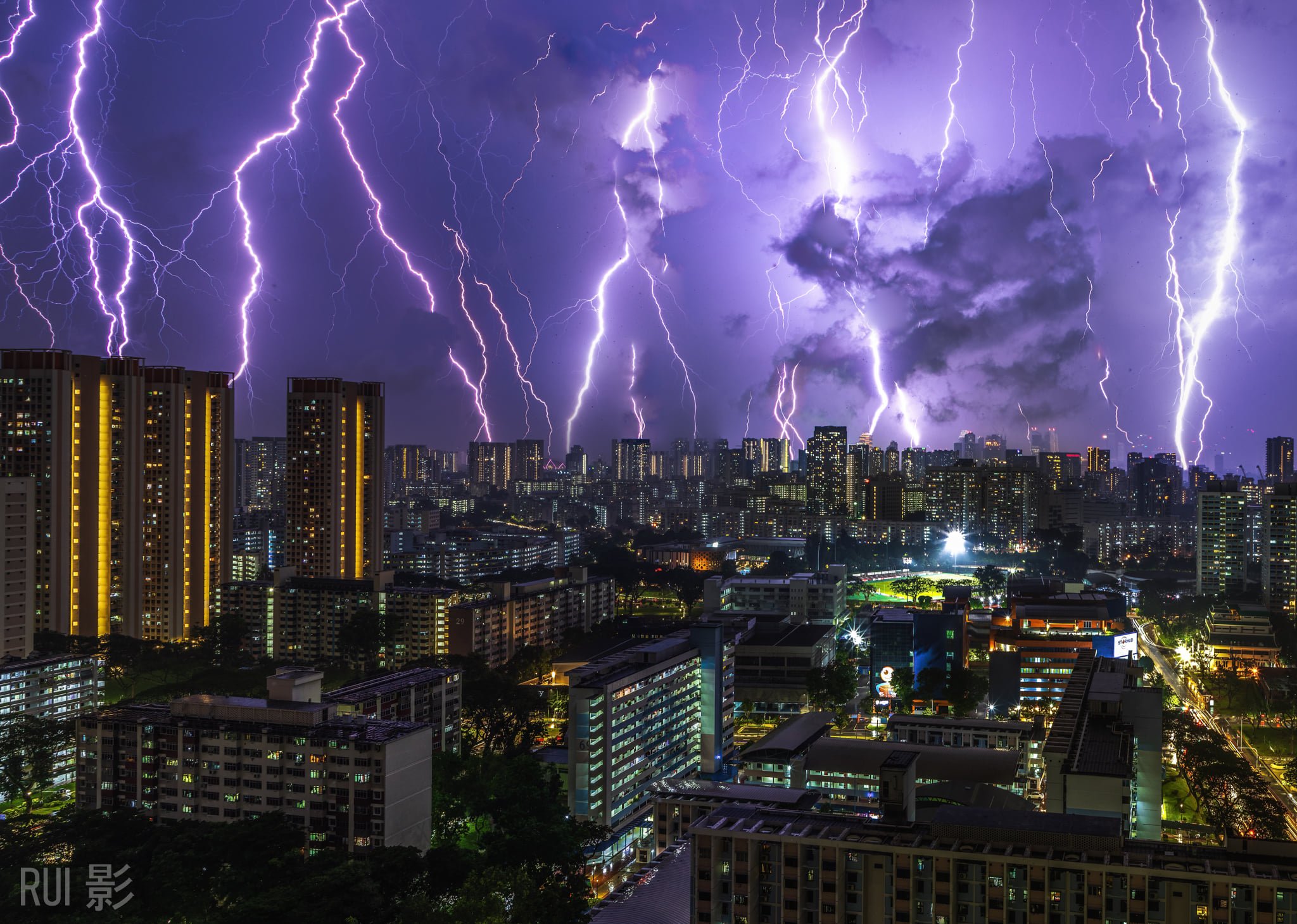 The awe-inspiring image is a composite shot of 14 images taken in the span of half an hour.

Nearby in the Potong Pasir area, another photographer got a shot of several majestic lightning bolts shooting down right above the HDB buildings. 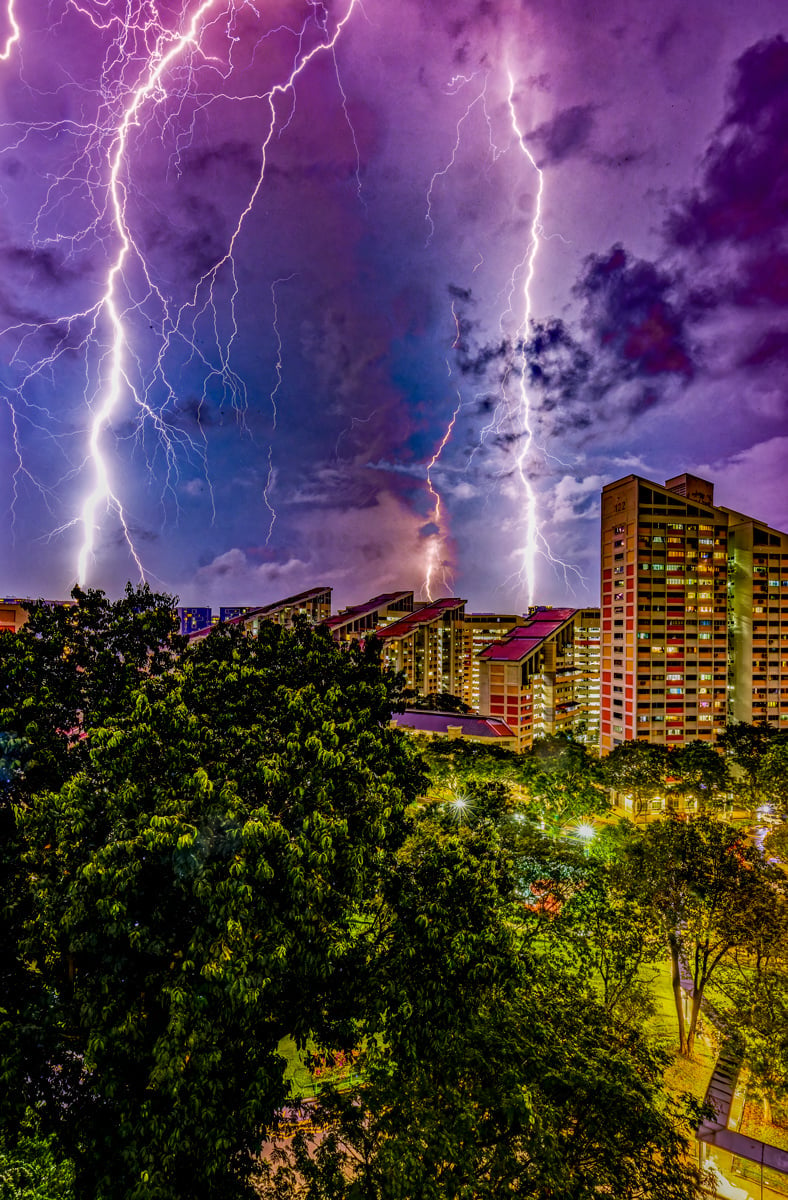 The lighting show illuminated the night sky as the thunderstorm rained down.

Photographer gets video of lightning climbing across sky

One Facebook user even managed to capture the lightning bolts creeping across the sky in a video.

Amazingly, he said the mesmerising video was taken using the motion trigger function on his Samsung Galaxy S21 Ultra phone.

The Meteorological Service Singapore (MSS) said the current inter-monsoon conditions wouldn’t be leaving us any time soon. And these thundery showers will be accompanied by frequent lightning.

So, in the weeks to come, you can look out for more lightning displays as the storms roll in. You might want to grab your camera to capture some stunning shots of your own.