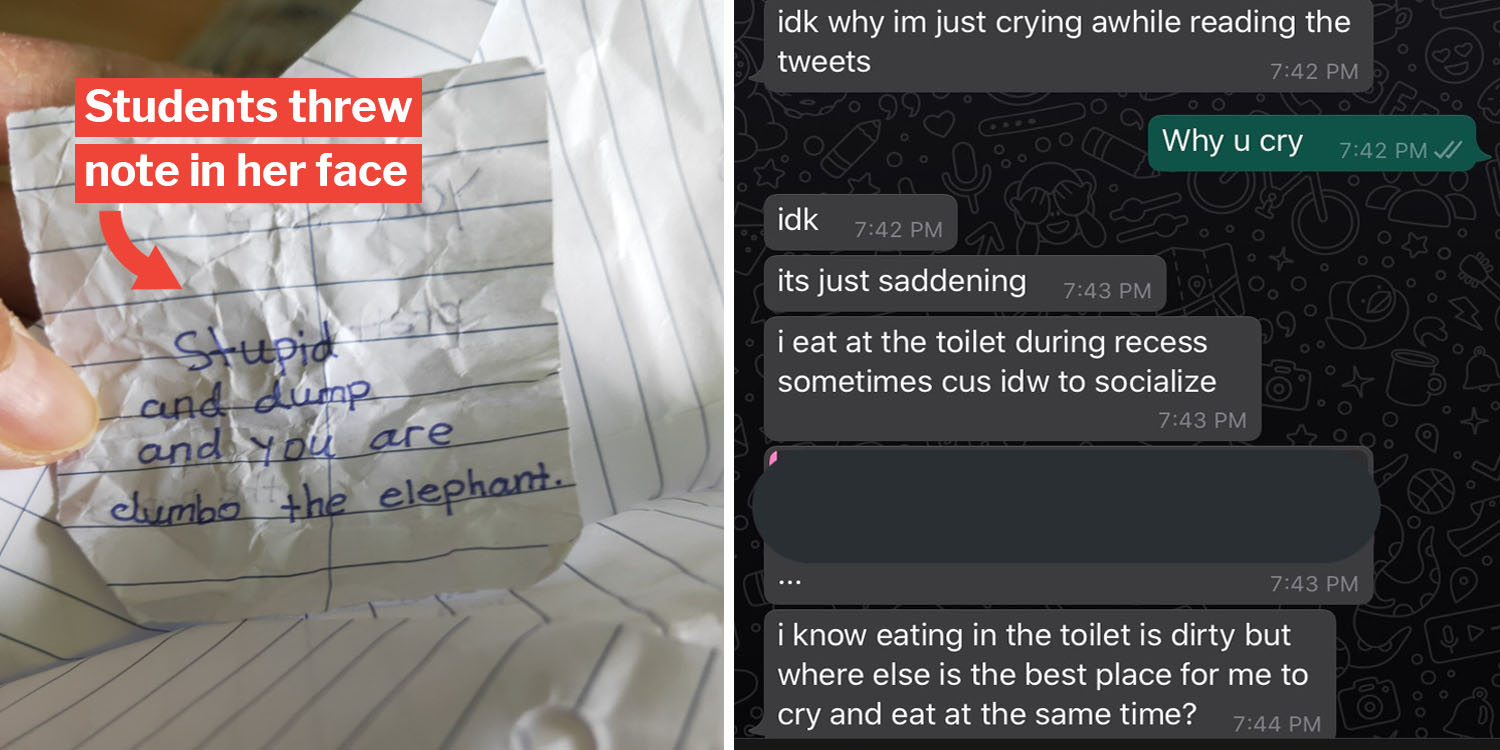 Update (11 Mar, 9.10am): The principal of the school has responded to inquiries from MS News regarding the incident. Here’s their official statement:

“The school is aware of the incident and has met up with the student’s mother. The school does not condone bullying of any form, including racist remarks made at any individual. Every incident is taken seriously, and the school will follow through with the appropriate disciplinary actions for the students involved.

Character education is cornerstone to a holistic education. The school will continue to enable our students to build healthy and respectful peer relationships for their overall emotional and social well-being.”

We always take pride in Singapore’s racial and religious diversity, but how often do we truly embody these principles?

Incidents like the brownface saga in 2019 highlight how far we have to go, and a student’s recent horrifying bullying experience at a local school only emphasises that.

The 11-year-old girl, one of only a few students of her race in the school, has allegedly had to put up with racial taunts from her peers.

Unable to bear seeing her in pain anymore, her sister took to Twitter on Friday (6 Mar) to air her grievances. 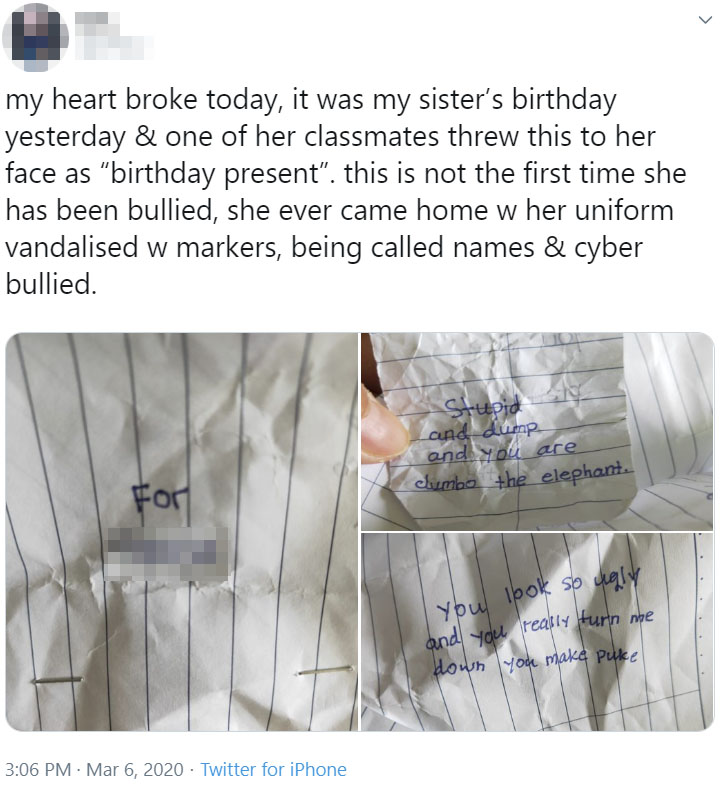 Classmates threw hurtful note at student on her birthday

Many of us would tend to feel like we’re on top of the world on our birthday.

This student, however, felt the exact opposite when one of her classmates threw a balled-up piece of paper at her as a “birthday present”.

Worse still was the note’s contents, which were far from complimentary. One called her “stupid and dump” — likely intending to say “dumb”, though the misspelling is quite ironic. 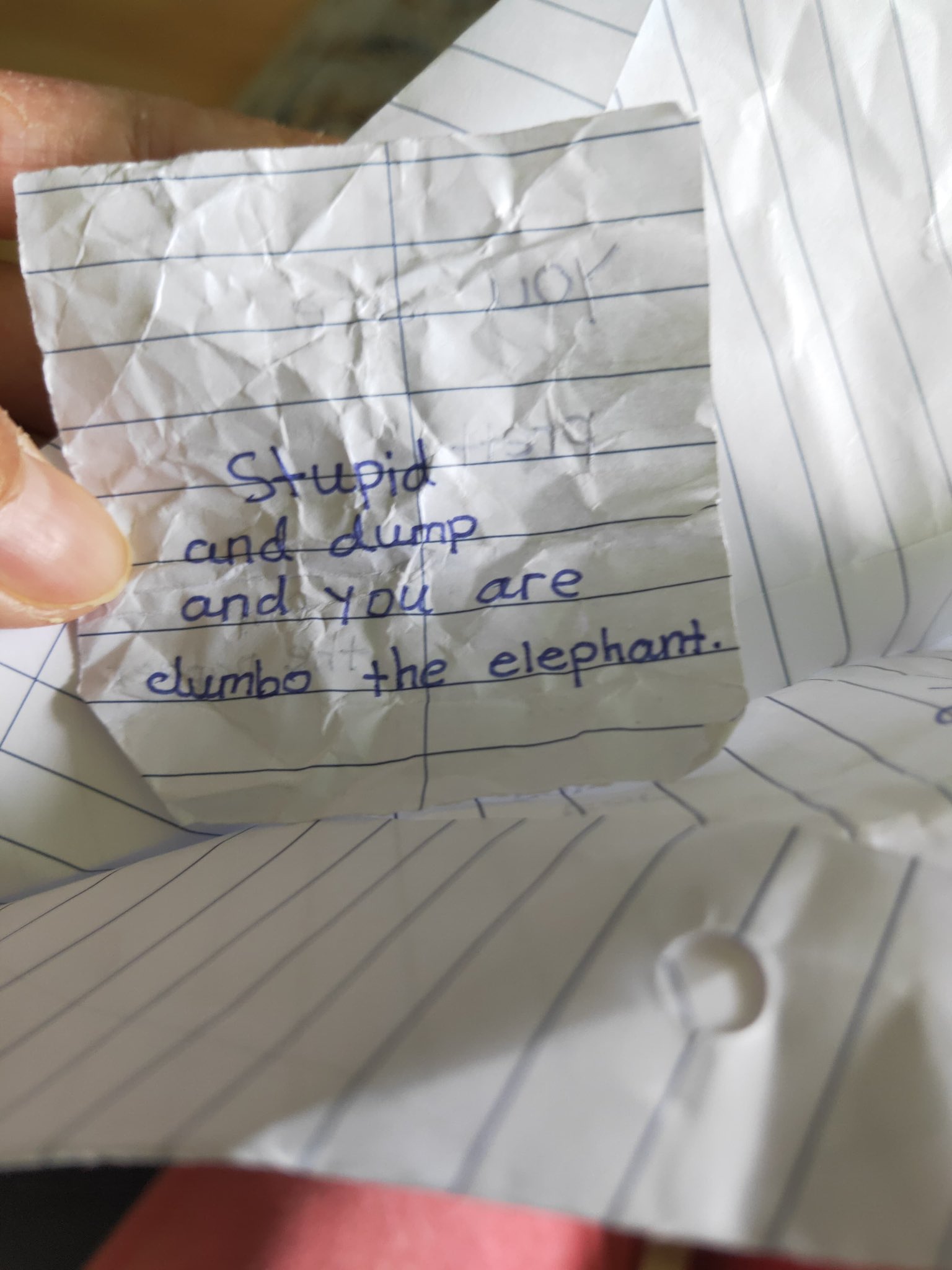 Another criticised her appearance, calling her “ugly” to the point that she repulses him. Poor English aside, the messages were extremely hurtful, especially since this wasn’t the first time the bullies had tormented her.

According to her sister, she has come home “with her uniform vandalised with markers”, “called names and cyber bullied”.

The bullied girl, who has likely been in the school since Primary 1, has had to endure such nasty treatment for several years.

Most of the time, she would keep mum to avoid stirring further conflict, even when her classmates allegedly called her a “black dustbin”.

Her sister also posted an exchange over messenger where the younger girl reveals the hurtful name directed at her by the bullies:

She has also had to deal with cyber bullying, as insinuated by a text in which she said she was “crying awhile reading the tweets”.

At that point, she was so fearful that she resorted to having meals in the toilet. As she explained,

I know eating in the toilet is dirty but where else is the best place for me to cry and eat at the same time?

Tried to speak up & alert the authorities but failed

The one time she did try to defend herself “out of anger” apparently backfired, when she “scolded the bullies vulgarities” and ended up in trouble instead.

Her sister related how the school called their parents up and asked the student to “publicly apologise to the bullies”.

Their mother even approached a teacher requesting for her daughter to be placed in a different class, but failed. The teacher allegedly said the move wasn’t possible, and suggested that they “consider changing her school” instead.

Her sister also sought help via other avenues too, but similarly to no avail.

Desperate to resolve the ongoing matter, she pleaded to netizens, hoping that more voices can raise awareness.

Hope the school & MOE will resolve the issue

We have reached out to the school for comments, and will update this article once they have responded.

The young student’s terrifying experience is something we would never wish upon anyone.

If it is indeed true that she has had to endure the bullying for a while, it has to stop now, and this will only happen with prompt action from the school.

We hope that the school and the Ministry of Education can look into such cases more seriously, and follow up with the necessary actions.

We all want to foster a harmonious society, and that has to actively happen on all levels.

My Silence In The Face Of Casual Racism Made Me Complicit. That’s Why I’m No Longer Staying Quiet.