Man Filmed Dragging Pet Dog At A Condominium In Rivervale

Training dogs with different temperaments and behaviours can be pretty challenging. The process takes time, and some might resort to aversive training methods to correct bad habits.

But if not done well, such methods may put the dog’s physical well-being at risk.

On Saturday (25 Sep), Instagram page @sgfollowsall shared a video of a man pulling and dragging a dog at a condominium in Rivervale. At one point, he also uses his feet to correct the dog’s behaviour.

Throughout the video, the dog can be heard yelping and barking. Many netizens voiced their concerns over the matter, saying the man’s actions indicated animal abuse.

SPCA is currently seeking information on the case.

According to the post, a condominium resident said she heard a dog yelping and barking. As she looked out the window, she saw a man holding a leash so short that his dog seemed as if it could have breathing difficulties.

She also saw the dog struggling as it was being dragged. She captured the incident in a video.

In the 1-minute clip, we first see the man crouching and looking at the dog. 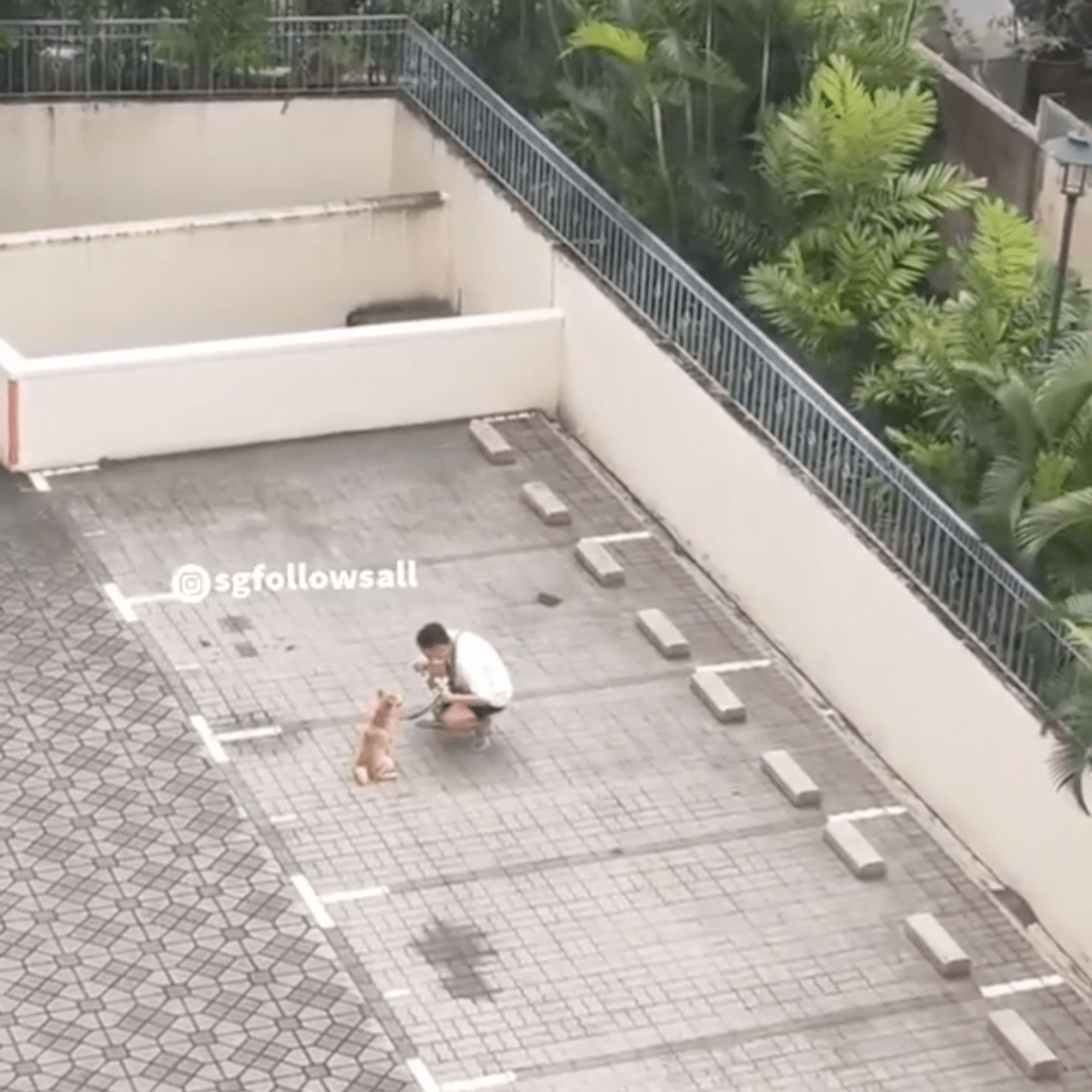 He appears to be giving instructions to train his dog. Holding the leash tautly in his hand, he slowly stands up.

But when his dog gets up, he tugs hard on the leash and starts shortening the length by circling it around his hand. The dog barks loudly in response.

The man then appears to give the dog a stern talk and repeats the action after.

But the dog lunges forward and barks again. Upon this, the man pulls on the leash so hard that he lifts the dog off the ground for a while.

He then kicks the dog, causing it to yelp in pain. At the same time, he lifted the dog off the ground again. The dog can be heard making a choking sound.

Man drags dog by leash as it yelps & cries

Following that, the dog laid on the ground, unwilling to move. 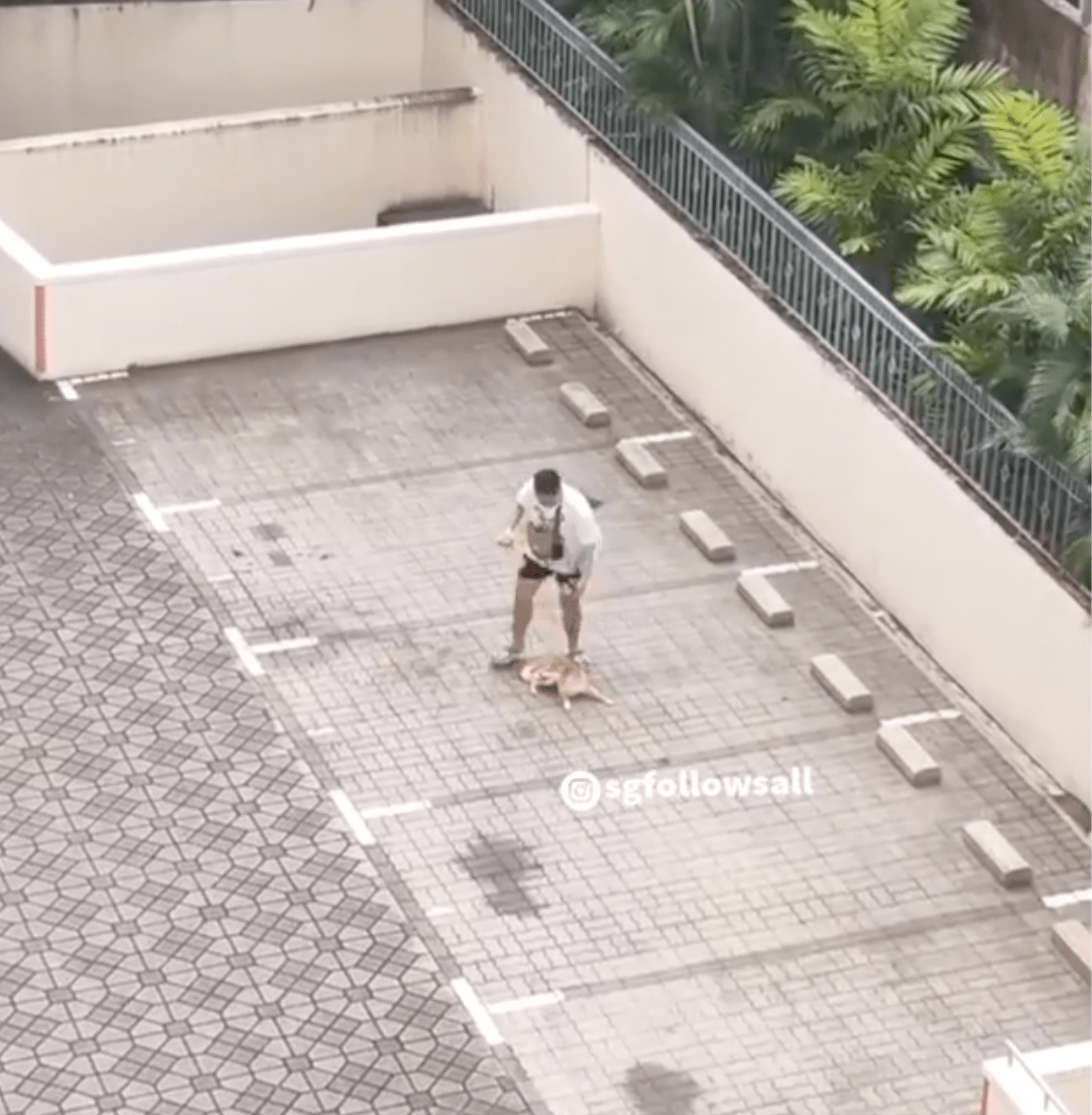 However, ignoring the dog’s yelps and cries, the man pulled the dog as if forcing it to walk.

A few steps later, the dog tried to lie down again. But the man continued walking, dragging the dog across the ground.

According to comments, this incident allegedly took place at Rivervale Crest, a condo in the Punggol area.

Watching the video, many admonished the man over his actions, saying the dog did not deserve such treatment.

Others expressed that even if he was training his dog, this was not the proper way to do it.

Some also voiced their concerns for the dog, hoping a report could be made and authorities could take action.

The dog needs to be immediately removed from the individual for its safety and needs to be examined by a veterinarian as soon as possible.

No animal should ever be subject to such abuse, and a clear signal needs to be sent that this will not be tolerated in our society. The case has been referred to the authorities for urgent enforcement action.

Anyone with information about the case, including the identity of the suspect, can email SPCA here. Information provided will be treated in the strictest of confidence.

The man’s treatment of the dog is indeed worrying. After all, all living creatures deserve respect and should not be mistreated as such.

Hopefully, authorities can take action and ensure the safety and well-being of the dog.