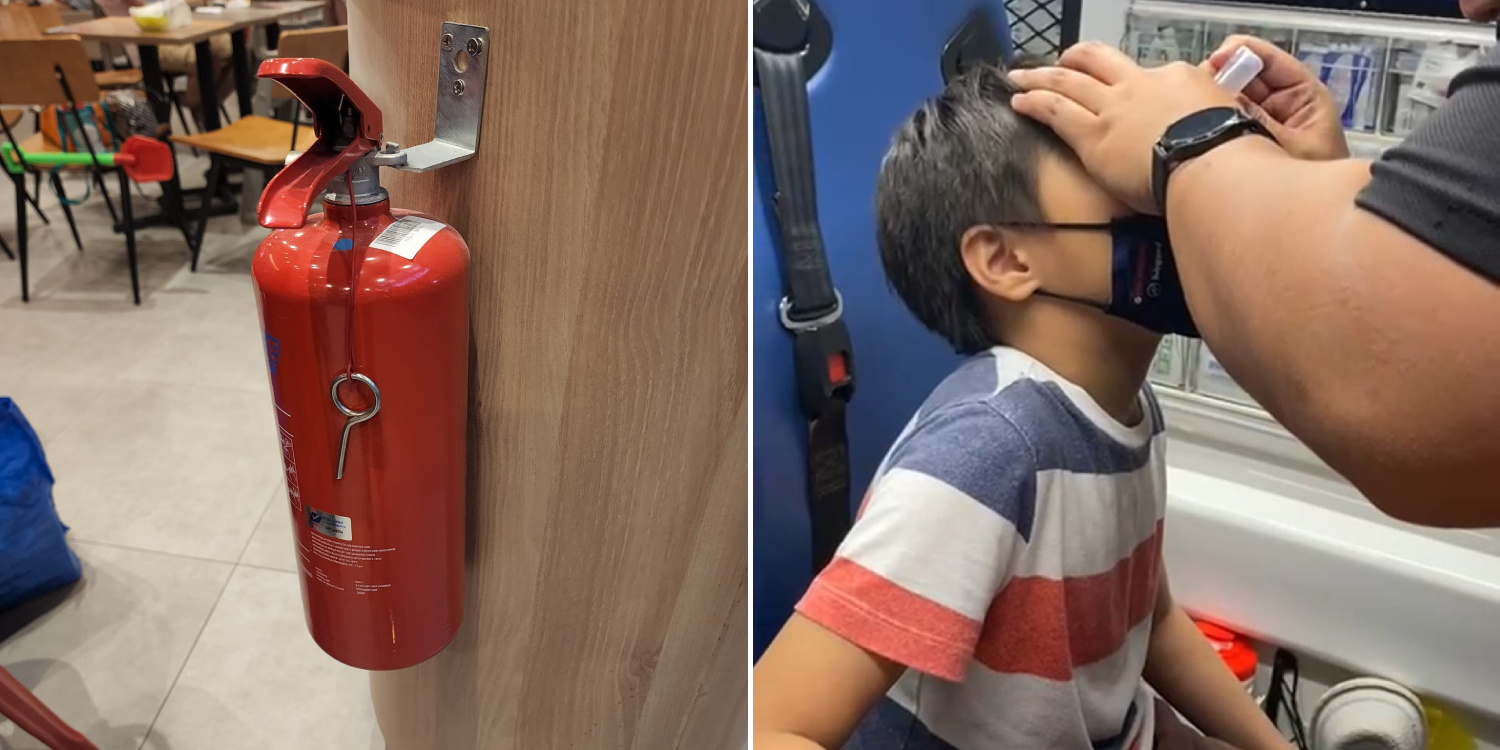 The restaurant manager said it's "not the restaurant's fault" the fire extinguisher's safety pin was missing.

UPDATE (26 May, 10.35am): Burger King has since launched an investigation into the incident and have reached out to the customer. You can read their statement to MS News below.

By now, some of you may have heard about the incident where two families had an altercation over a fire extinguisher blunder.

Some may have wondered why things were serious enough to warrant calling the police and paramedics to the scene.

On Monday (23 May), Ms Lim, whose daughter and nephew had the fire extinguisher sprayed at them by a boy from another family, took to Facebook to give her side of the story with two lengthy posts, which she divided into Part 1 and Part 2.

Explaining why she called the police and paramedics, she claimed that the restaurant had shown disregard for the children and reacted irresponsibly toward other diners. The other family also allegedly brushed off the incident.

In her post, Ms Lim shared that she had brought her family to the water-themed playground Coastal PlayGrove on Sunday (22 May).

She was there with her husband, her 23-month-old twins, her parents, her nephew, and sister-in-law. 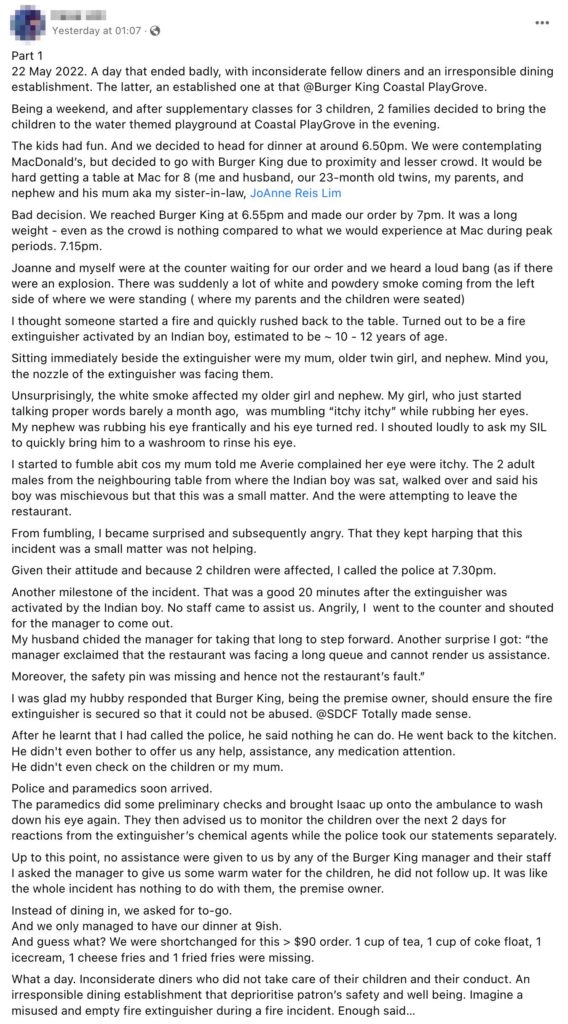 That evening, they decided to head to the nearby Burger King (BK) for dinner.

They made their order by 7pm, but it was a long wait as the restaurant was packed.

At about 7.15pm, while the family was still waiting for their food, Ms Lim recalled hearing a “loud bang”, like that of an explosion. She then saw “a lot of white and powdery smoke” flowing from where her parents and the kids were seated.

Thinking that there was a fire, she quickly rushed back to the table. There, she found out that “an Indian boy” of about 10 to 12 years of age had activated a fire extinguisher.

Kids complain about feeling unwell, adults brush it off

Ms Lim said the white smoke affected her older daughter and nephew. Her daughter kept saying “itchy itchy” while rubbing her eyes, while her nephew’s eyes had turned red. She quickly asked her sister-in-law to rinse his eyes in the washroom.

According to Ms Lim, two adult men who were sitting at the same table as the Indian boy then walked over to them. One of them said his son was “mischievous” while brushing it off as a “small matter”.

They also looked as if they were trying to leave the restaurant. This was when Ms Lim became angry. She decided to call the police at 7.30pm.

Even after 20 minutes had passed, Ms Lim alleged that no one from BK stepped up to help her family. Furious, she shouted that she wanted to see the manager.

To her surprise, the manager explained that they were unable to “render [them] assistance” as “the restaurant was facing a long queue”.

The manager added that the fire extinguisher’s safety pin was “missing” which thus made it “not the restaurant’s fault”.

Ms Lim’s husband then retorted that BK, as the occupant of the premises, should “ensure the fire extinguisher is secured so that it could not be abused”.

However, pictures show that the pin was not missing, but unsecured and hanging loose. 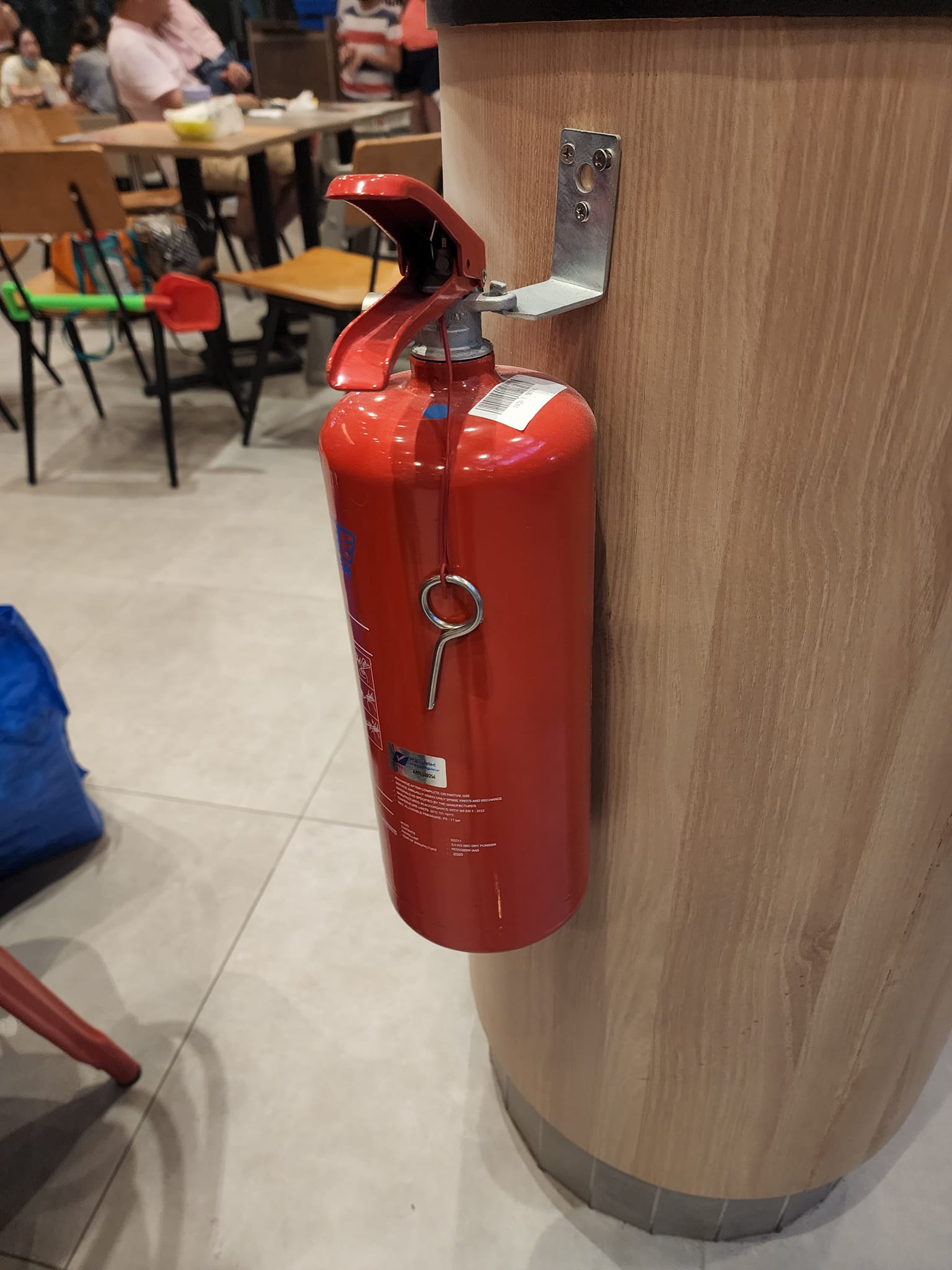 When the manager found out that Ms Lim had called the police, he allegedly said that there’s “nothing he can do” and “went back to the kitchen”.

Restaurant manager declines to cordon off the affected area

In a follow-up post, Ms Lim shared more about her conversation with the BK manager while waiting for the police to arrive. 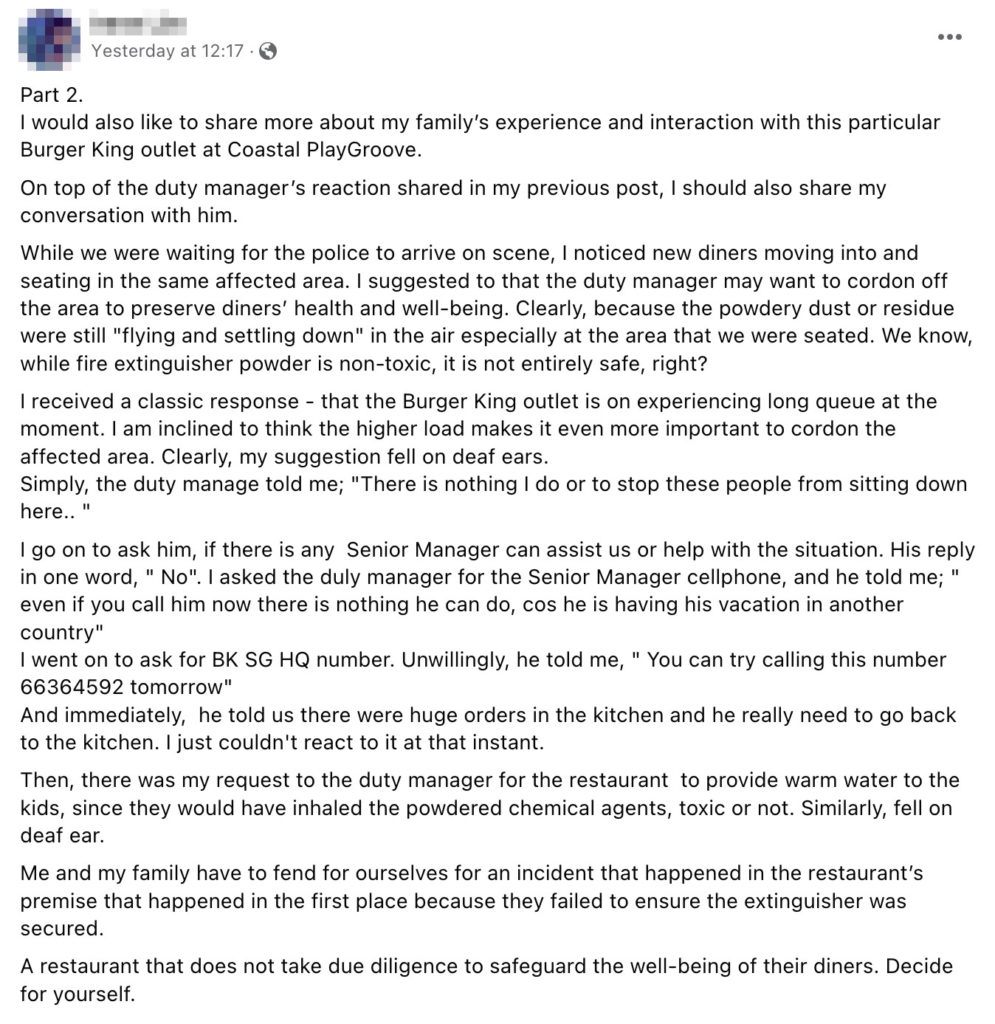 She spotted new diners sitting in the affected area and suggested that the manager “cordon off the area to preserve diners’ health and well-being”. This was because the powdery residue from the fire extinguisher was still in the air and may not be “entirely safe”.

To this, the manager reiterated that BK is facing a “long queue” at the moment. He reportedly told Ms Lim,

There is nothing I [can] do to stop these people from sitting down here.

When Ms Lim asked if there was a senior manager who could help, the manager simply replied, “No.”

After she asked him for the senior manager’s number, the manager allegedly said he was on vacation.

Next, Ms Lim asked how she could contact BK Singapore’s headquarters. The manager reluctantly gave her a number to call the next day.

He then said there were “huge orders in the kitchen” and that he really needed to go back to work. Ms Lim was presumably so dumbfounded that she “just couldn’t react to it at that instant”.

She also alleged that BK ignored her requests to provide warm water to the kids since they inhaled chemical agents.

In response to queries from MS News, a Burger King spokesperson said that they’re investigating the incident. Here’s their statement in full:

BURGER KING® SINGAPORE is aware of the incident that occurred on Sunday 22nd May at BURGER KING® Coastal Play Grove. We have launched an internal investigation to better understand the incident and we have also reached out to the customer.

After some preliminary checks, the paramedics brought Ms Lim’s nephew to the ambulance to wash his eye. 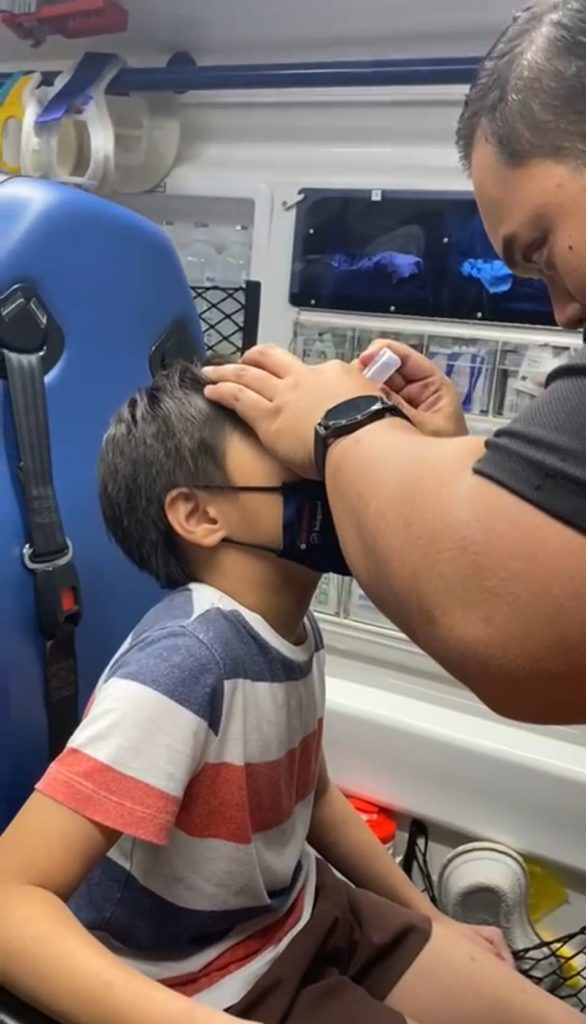 They advised her to monitor the children over the next two days for “reactions from the extinguisher’s chemical agents”. The police took their statements separately.

As if their day couldn’t get any worse, Ms Lim reported that when they finally ordered their dinner to-go and ate at around 9pm, there were numerous items missing from their order, which cost over S$90.

Judging from the Facebook comments, most users appear to be taking Ms Lim’s side.

One said that BK should have stepped in to assist her family.

Another netizen said the “long queues” were no excuse especially since the fire extinguisher incident was “more urgent”.

This user compared BK’s reaction to that of another restaurant, which was far more helpful after an accident. 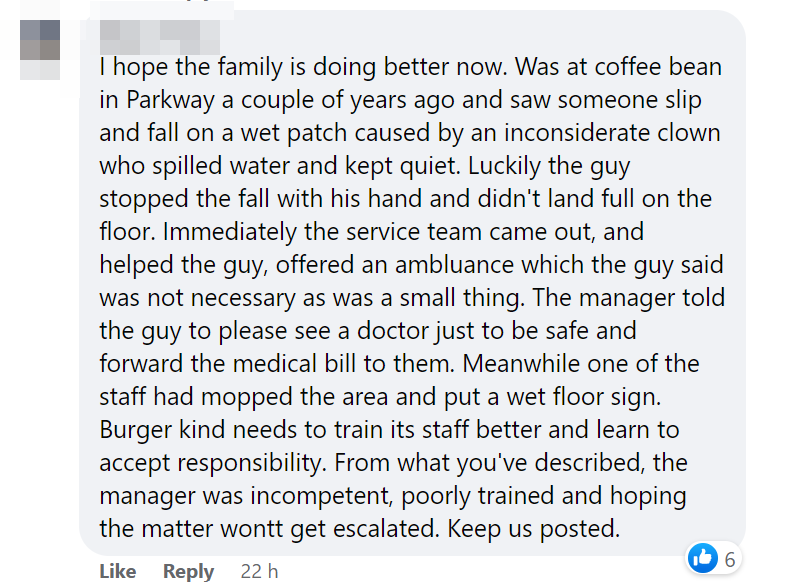 While accidents happen and are difficult to avoid, BK’s apathy and lack of accountability, if true, are rather shocking and disappointing.

As the ones operating on the premises where the incident occurred, it was their responsibility to check that their fire extinguishers are properly secured.

They should also have ensured that Ms Lim’s family was okay and, like other restaurants have done, assisted them in any way they can.

We wish Ms Lim’s children a speedy recovery and hope she can get an explanation from BK as to why the matter was not handled properly.