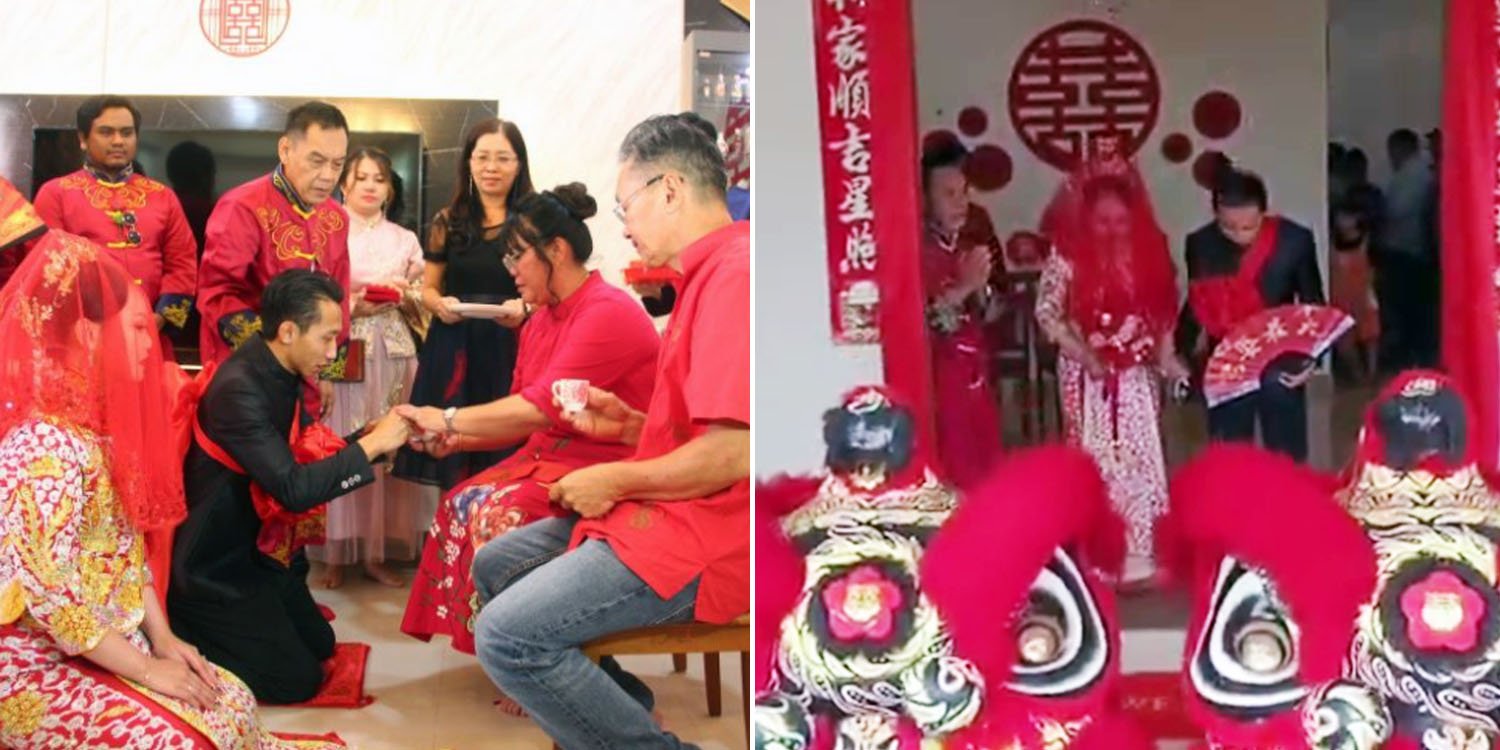 He proclaimed his love for her in Chinese and serenaded her with a Teresa Teng song.

One of the greatest highlights of a multicultural nation is seeing people from different ethnic and cultural backgrounds come together.

Like us, Malaysia is a melting pot of cultures, making interfaith marriages fairly common there.

This has led to some rather interesting weddings, like this one by a Muslim couple featuring a lion dance. 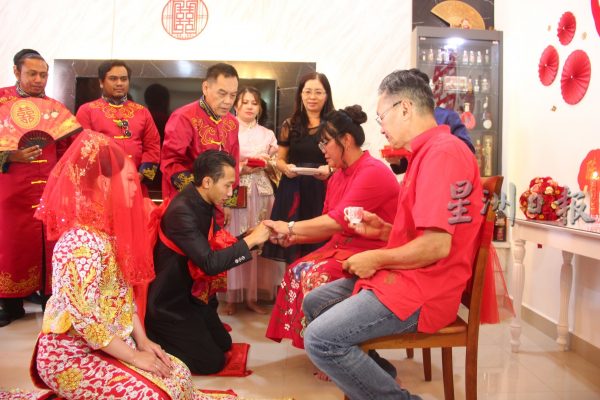 A recently held wedding ceremony between a Malay Muslim man and a Chinese woman seems to follow in their footsteps, as it featured not only a lion dance but a tea ceremony and gatecrashing.

The home of the bride, Chen Yan Xin (transliterated from Chinese), was a picture of racial harmony and integration as her husband, Mohammad Amin, arrived at her doorstep on Sunday morning (16 Oct).

As part of the gatecrashing ritual, his entourage was greeted by a lion dance performance, Sin Chew Sarawak reported.

Amin is then escorted into the house, where his bride’s family and bridesmaids await him and his groomsmen.

Committing fully to wedding customs, Amin and his entourage are decked out in full traditional Chinese wedding garb. 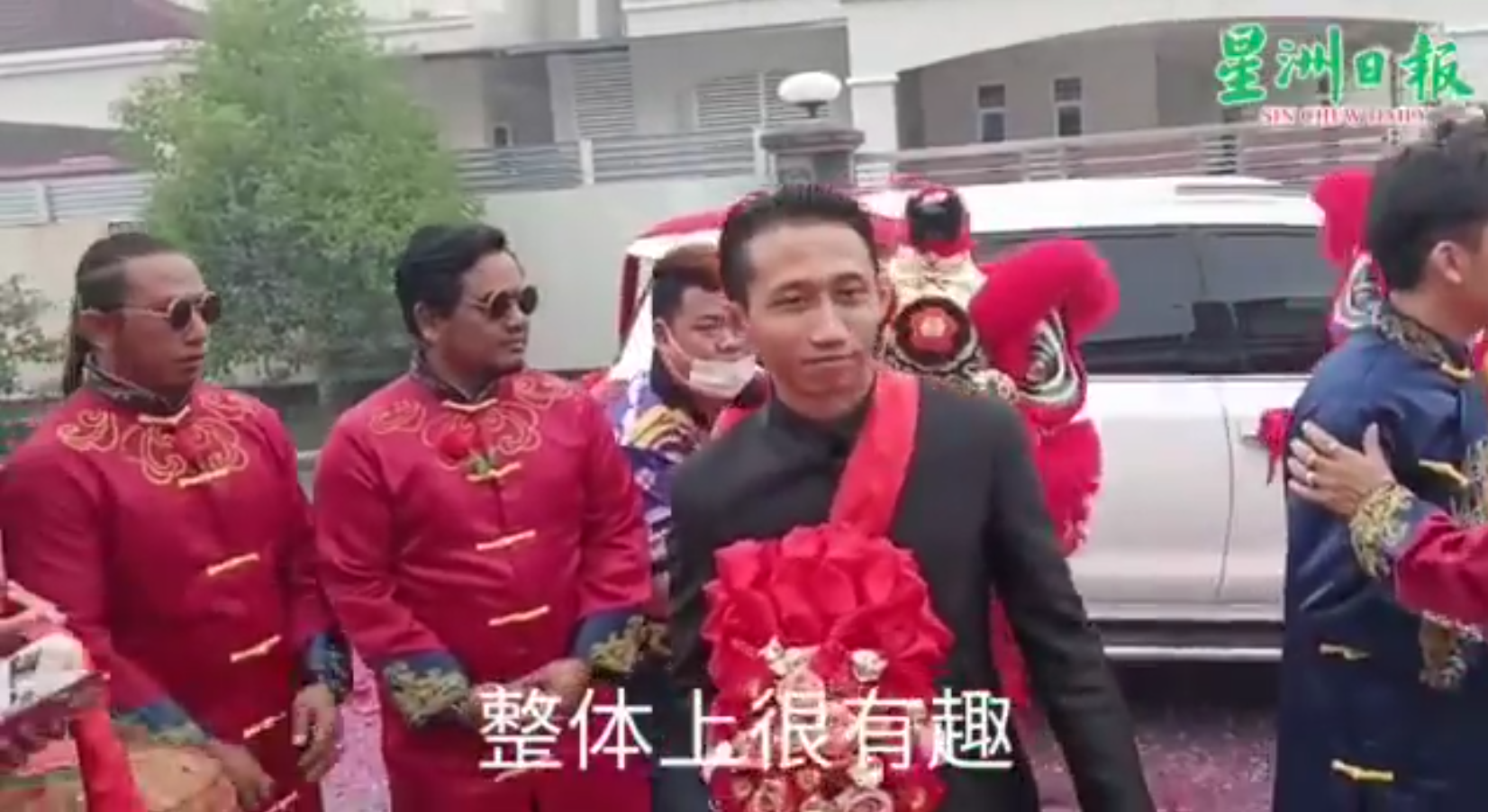 Before receiving his bride, he declares his love for her in Chinese and sings Teresa Teng’s classic hit ‘The Moon Represents My Heart’.

Amin and Yan Xin are later seen serving tea to her relatives.

With help from the chaperone, Amin even addresses his new in-laws as ‘papa’ and ‘mama’ in Chinese. 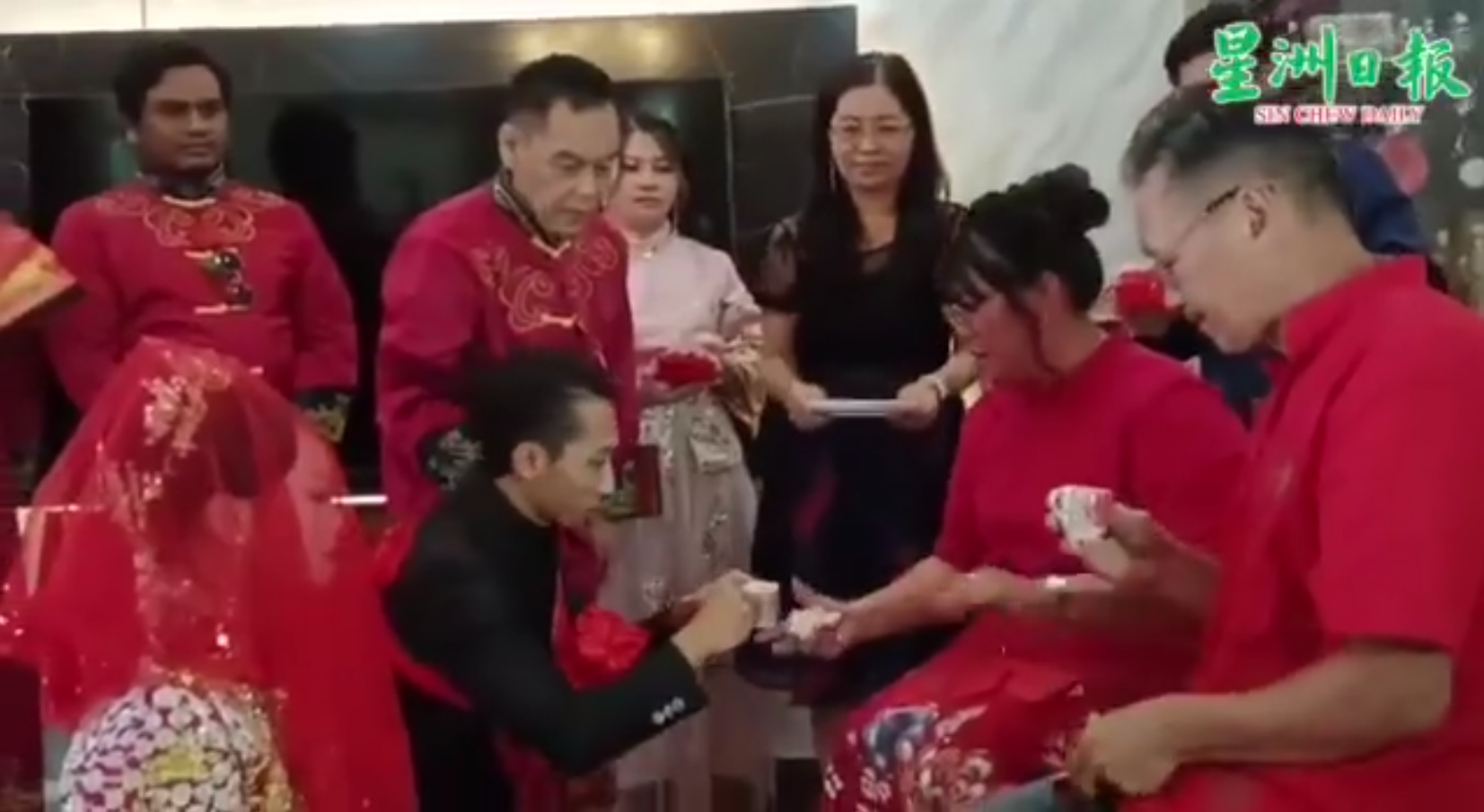 Besides that, the couple also offered prayers to the Jade Emperor.

When interviewed by the publication, Amin said they met in a gym where he practised Jiu-Jitsu and she Muay Thai.

They had travelled back to his wife’s hometown of Miri, Sarawak, for the ceremony, as she works at a laboratory in Peninsular Malaysia.

This is their second celebration of matrimony, as they had held a traditional Muslim ceremony earlier this year in August.

Due to the differences in race and faith, Yan Xin’s mother admitted that it took her three years to accept her daughter’s relationship.

However, her stance changed once she saw Amin’s good character during his two-week stay in Miri.

For Yan Xin’s father, he was unfazed by their union due to years of working in Brunei, where Chinese-Malay hybrid weddings are all the more common. He added that as long as the couple is happy and takes care of one another, race and religion won’t be an issue.

“It is best when all the races are united, as it makes for a more enlightened world and forges a flawless nation,” he said.

Echoing his father-in-law’s sentiments, Amin said it is fascinating to learn different races’ customs and that it deepens their respect for one another.

Proof that love conquers all differences

Despite the hurdles they have faced, the strength of their love has won over their families and overcome their differences.

We wish the couple a lifetime of happiness, and hope their story inspires us all to preserve our united front.