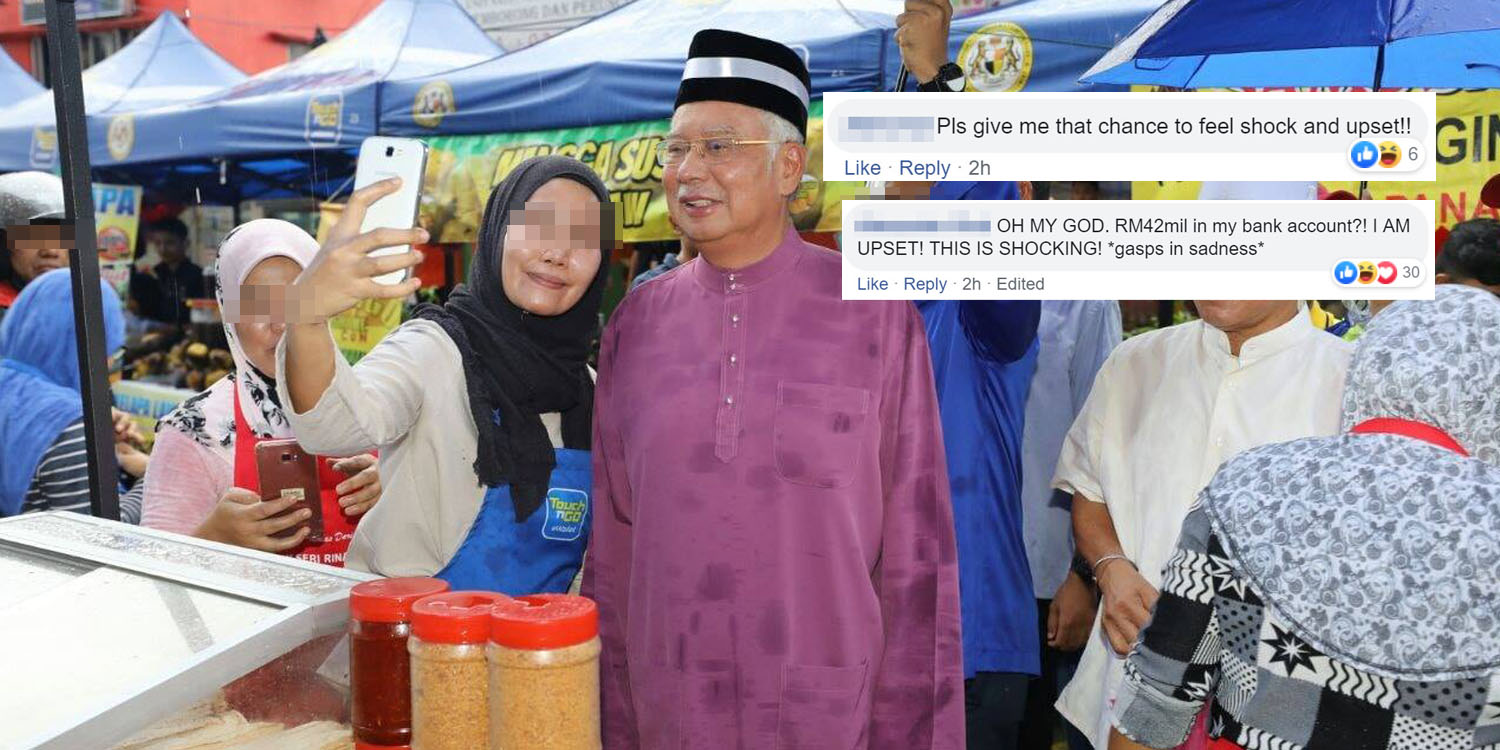 These emotions are trending right now.

Netizens are having a field day roasting ex-Malaysian Prime Minister Najib Razak online, after news of his corruption trial broke today that he was “shocked and upset”.

Why? Apparently that was his genuine reaction when he found his private accounts suddenly holding RM42 million more than they should.

On Wednesday (29 May), Malaysia’s High Court heard from a witness that Najib was “shocked and upset” upon finding out, and that he didn’t know anything about the transaction.

Najib asked to “share” the burden with fellow Malaysians

Netizens wrote they were shocked at his reaction. But not before lacing their words with hilarious sarcasm.

Some also wanted the chance to “share” the burden with them. It must be too much to handle shock and sadness at one go.

But not shocked enough to take action?

Many swiftly noted that Najib was evidently not shocked enough to take the appropriate action — lodging a police report.

Others swooped in to speculate where the money went.

It is hard for Najib’s wife to escape from her share of the incoming scorn when she is notorious for her obsession with expensive handbags.

Najib doesn’t understand why his reaction is news

Hours after “shocked and upset” became headlines of many Malaysian news portals, Najib is puzzled.

He wrote on his Facebook in Malay that he didn’t understand why this became the main story headline. I’m not sure why this is the headline by Malaysiakini and other media.

1. Witness is remanded for 4 days by SPRM over SRC case.
2. Witness is released when remand ends.
3. Witness came to see me to explain regarding SRC.
4. Should the witness return to SPRM to report on the same SRC case that he was just remanded over?

Many more news can be used to sensationalise the headline as reported by Malaysiakini below.

Najib gives four other examples of details that happened on the 20th day of his trial that should have been highlighted, like how the Malaysian Anti-Corruption Commission (SPRM) remanded the witness for 4 full days.

To his dismay, he wrote,

But no, they used a ridiculous headline.

What’s the gist of the hearing?

The court previously heard that the astounding amount of money was transferred into two of Najib’s personal accounts between December 2014 and February 2015.

Were you shocked too?

Even from across the Causeway, we know Najib is no stranger to scandals and controversies.

It’s no wonder that netizens picked the juiciest part of an otherwise, lengthy court hearing process, to roast the one person standing in the eye of the 1MDB storm.

What were your reactions to the news? Let us know in the comments below.

If you need more help catching up, you should know that Najib’s wife Rosmah Mansor, too, is facing criminal charges.

Before today’s court trial, Najib was arrested a few times in 2018.