Newton Temperature Drops To 21.2°C On 1 Jan, PUB Warns Of Flash Floods In 5 Areas Due To Heavy Rain

Rain Covers Every Part Of Singapore On New Year’s Day, Forecast To Continue Till Next Morning

If you’re out and about on the first day of the New Year, you might have noticed that we’ve had quite a wet start to 2021.

Torrential downpours have erupted all across the island, drenching areas from Bedok to Bukit Batok. 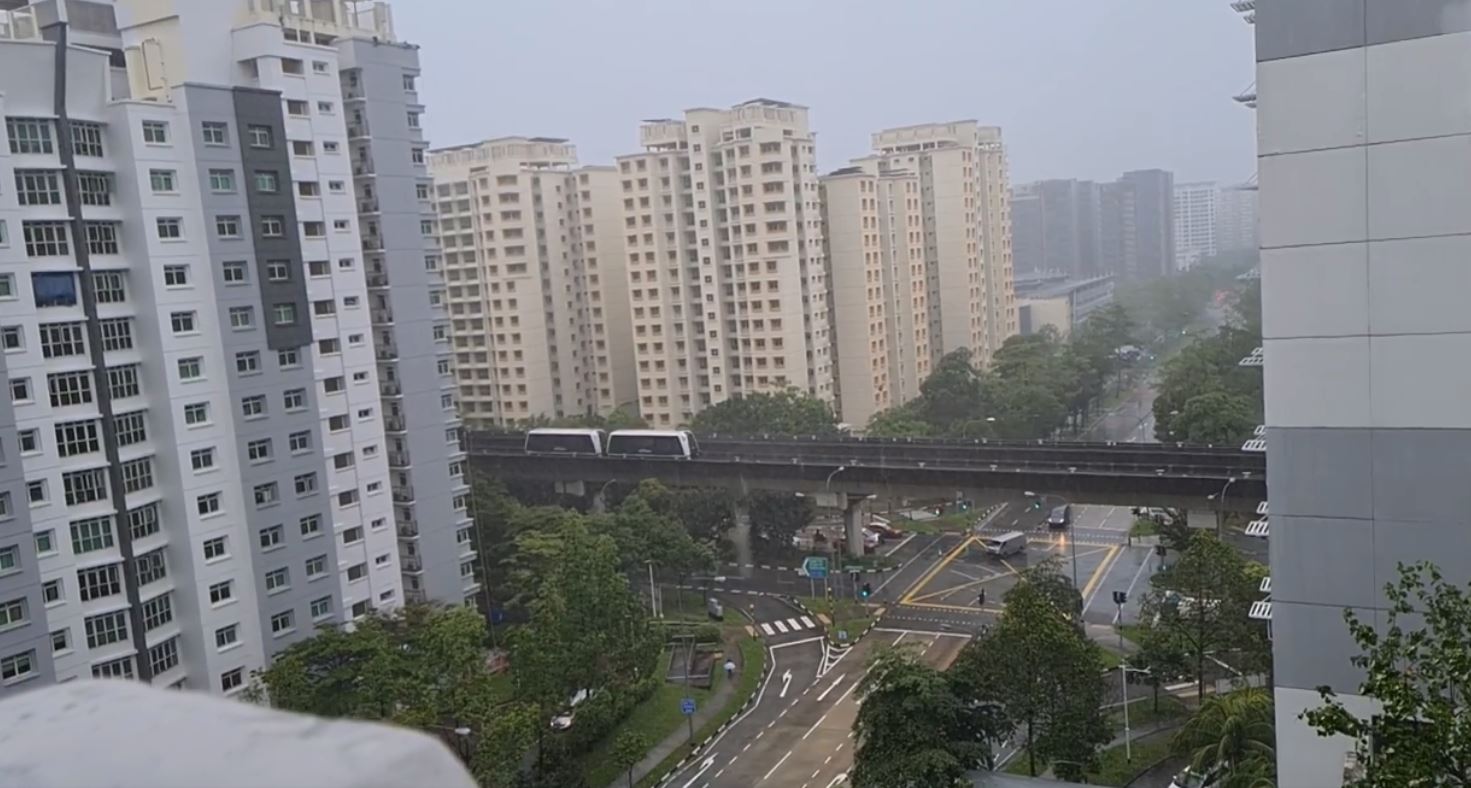 The heavy rain has led national water agency PUB to warn the public on Facebook that flash floods might occur in 5 areas.

It’s not only wet, but cold too – with a low of 21.2 degrees Celsius recorded in Newton.

Showers started in the morning

As the showers started in the morning on Friday (1 Jan), it became clear that it was going to be a very wet day indeed. At times, the rain was so heavy that it looked like snow or even hail. Even as it stretched late into the afternoon, the rain wouldn’t let up. 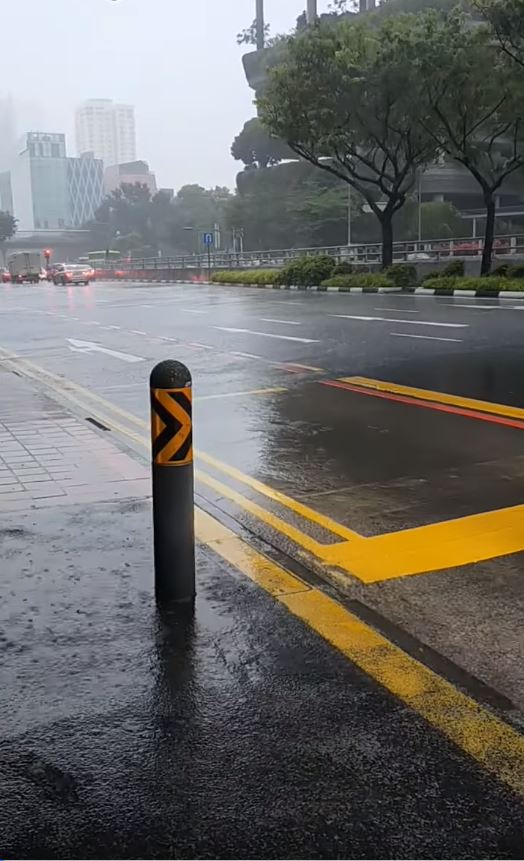 An unfortunate group of construction workers at a Chinatown site only had umbrellas to shield themselves, and would probably end the day soaked. 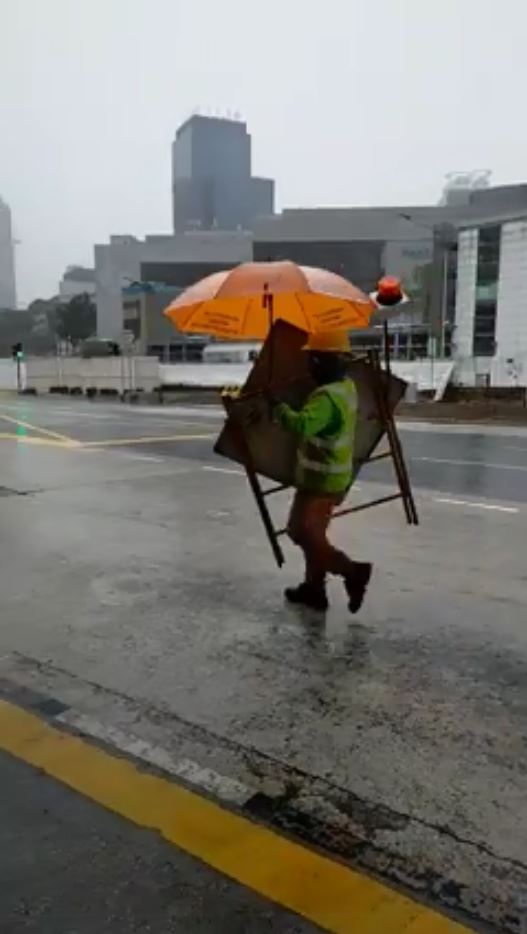 Rain forecast to continue for the whole day

A check with the Meteorological Service Singapore (MSS) confirmed what we already knew: The rain is widespread enough to cover in every part of Singapore as of 5pm on 1 Jan. 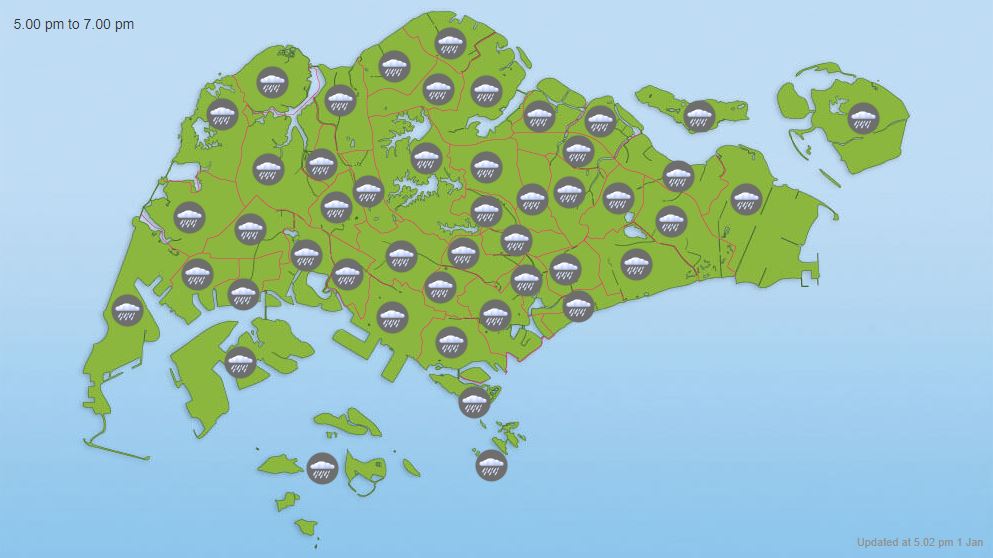 Even as we move into the night, there’ll be no respite, as MSS predicts rain, rain and more rain up till Saturday (2 Jan). 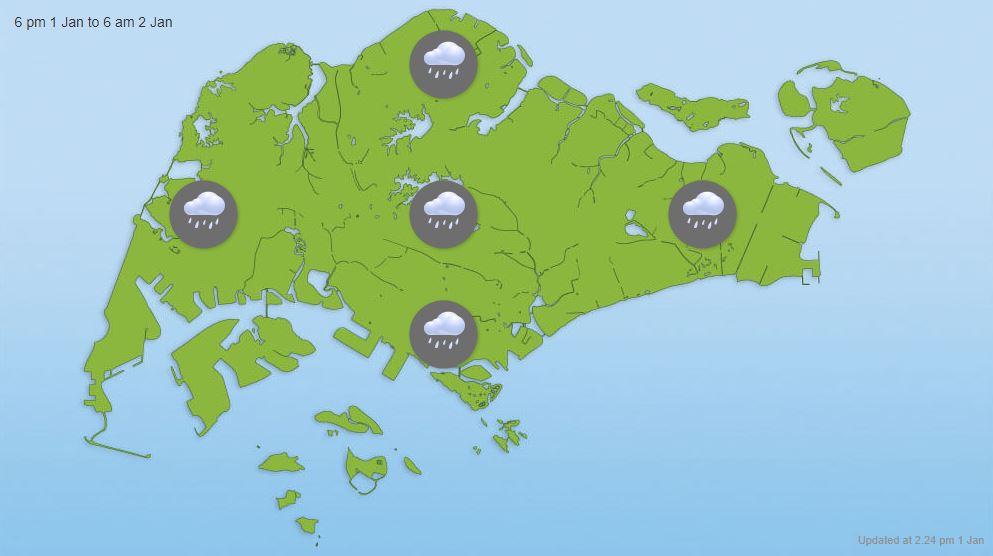 Particularly for those in Newton, where the temperature dropped to a low of 21.2°C at 2.22pm.

That’s close to the chilly climate of 21°C recorded at Newton on 16 Sep – which was recorded at 4am, not in the afternoon.

Even the high of 27°C recorded at Tai Seng today isn’t too warm for Singapore’s standards.

Inevitably, Singapore’s canals and drains have also started filling up due to the relentless rain. Some netizens even commented that it looks like milk tea without pearls.

Eventually, the PUB issued a flood warning after canals/drains in 5 areas reached 90% of their capacity.

Residents were advised to avoid these areas. They’re located at:

If you’re heading around these areas on foot, do watch out for flash floods.

We were warned by MSS about this, actually.

On Thursday (31 Dec), they issued a statement predicting that we would experience a wet and windy start to the New Year. Thanks to the Northeast Monsoon that blows low-level winds from the northwest or northeast in Jan, MSS said we’ll enjoy windy and cooler conditions.

1st half of Jan to see above average rainfall

In the 1st week of Jan, moderate to heavy showers will manifest on 2 or 3 days.

On most days in the 1st half of the month, we can expect “moderate thundery showers” in the afternoon, which may extend into the evening.

“Heavy and widespread thundery showers” will spread across Singapore on a few days.

Thus, most parts of the island will get above average rainfall in the 1st 2 weeks of Jan.

Daily temperature could plunge to 22°C

The air-con weather experienced today won’t be a one-off occurrence, either.

MSS said temperatures could plunge to a low of 22°C on “a few days” in the 1st 2 weeks of the month, with a high of 31°C also possible. 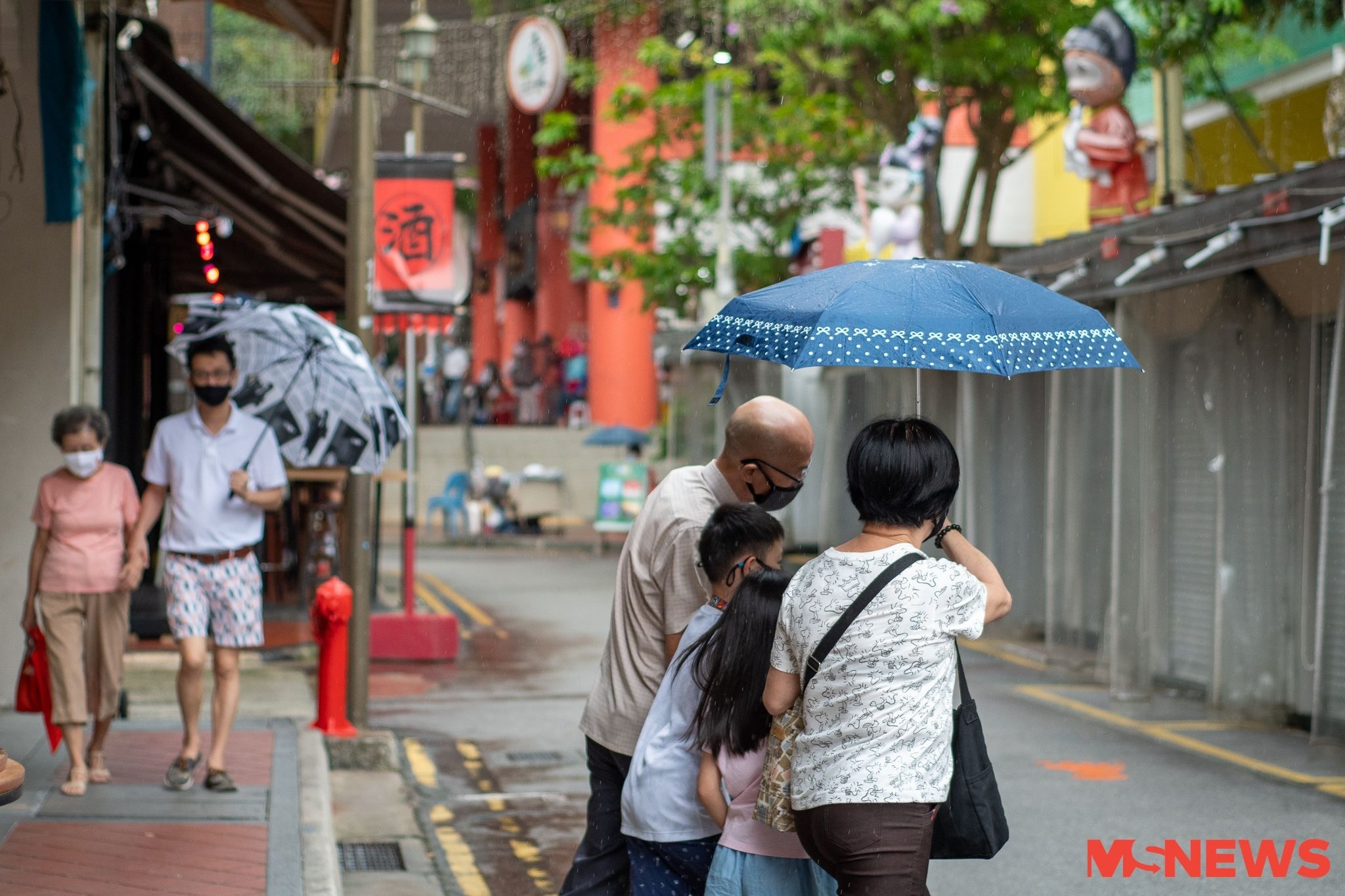 Cooler weather may last till Mar

Though rain can be an inconvenience to some, especially those who don’t like to carry umbrellas, it can be a delight for those who plan to stay mostly at home over the long weekend.

Though we had some warmer weather in the last 2 weeks of Dec, those who love cooler weather will be grateful that MSS says it may last till as long as Mar.

There’s nothing better than curling up in bed with a good book or some Netflix, and the rainy days mean that you won’t even need to turn on your air-con to be comfortable.

But if you’re out and about, remember to arm yourself with an umbrella, and bring a sweater if you’re sensitive to the cold.