Cockroaches are often labelled as pests and would often invoke a fight or flight response for most upon seeing it.

However, a research team from Nanyang Technological University (NTU) found a good way to ‘utilise’ these seemingly pesky creatures.

Equipping Madagascar hissing cockroaches with a high-tech ‘backpack’, researchers were able to detect the presence of gases and even signs of life.

With the sensors, these special cockroaches can aid rescuers deployed to disaster sites, reports The Straits Times (ST).

The research, led by Associate Professor Hirotaka Sato at the School of Mechanical and Aerospace Engineering, started 4 years ago. It is conducted in partnership with Singapore’s Home Team Science and Technology Agency (HTX) and engineering firm Klass Engineering and Solutions.

Professor Sata’s plan was to equip a Madagascar hissing cockroach with a 5.5g ‘backpack’ consisting of several sensors. A group of these cockroaches will then be released at a disaster site to aid rescuers. The species of cockroach was chosen due to its large size and hardy nature. It is reportedly able to withstand 10 times more radiation than humans and live up to 7 days without their heads.

Through a human detection algorithm, the team found that the cockroaches, once equipped, can distinguish between human and non-human subjects with 87% accuracy.

For an area of 5km2, around 500 such cockroaches will be needed.

NTU Cockroaches to save victims at disaster sites

Speaking to ST, Professor Sato shared that he was awarded Nanyang Assistant Professorship the same year Japan was struck by a severe earthquake in 2011. Back then, Singapore was the first country to dispatch rescue teams to Japan.

Since then, he had been “seriously motivated” to use his technology to help with Singapore’s rescue missions.

Since the cockroaches can navigate small and tight spaces which are often inaccessible to humans, it will improve the agility and efficiency of Home Team operations.

Currently, between 100 and 200 of these cockroaches are housed in NTU’s School of Mechanical and Aerospace Engineering. Interestingly, the containers they’re housed in are tailored to mimic the humidity and temperature of their natural habitat.

In the latest prototype, the cockroach is first anaesthetised with carbon dioxide. After the wax of its back is carefully scraped off, 2 electrodes and a microchip are attached. 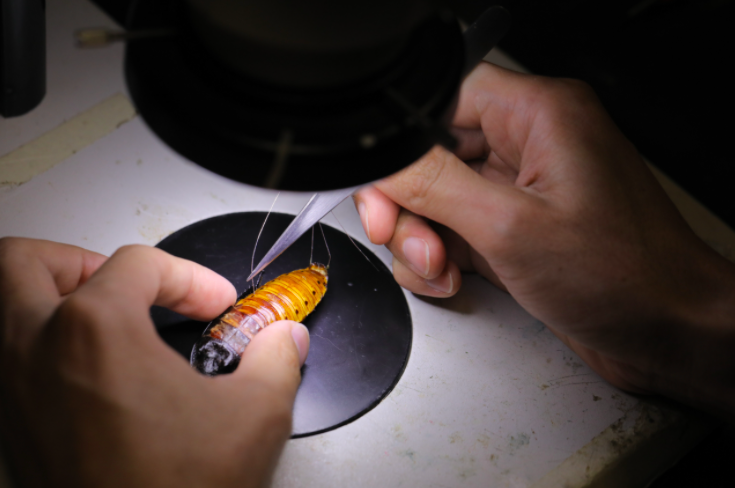 Once the cockroach regains consciousness, it will continue scurrying around. However, with the microcomputer attached, it will send electrical signals to direct its movement.

Currently, the research is in its developmental stages, with engineers working to optimise the chip and sensors. Mass manufacturing and fitting of the chips on the cockroaches are still underway.

According to Professor Sato, the entire manufacturing process of these cyborg bugs should ideally be automated and error-free.

He also hopes solar and biofuel calls can be used to charge the battery and extend the backpack’s operation time.

Director of HTX’s Robotics, Automation and Unmanned Systems Centre of Expertise, Mr Cheng Wee Kiang, says they hope to deploy the insects in the field within the next 5 years.

Hope invention can be deployed soon

With Professor Sato’s invention, it would certainly make search-and-rescue operations a lot safer and efficient.

Additionally, we’re glad they managed to find a good use for cockroaches and away from the perception that they’re merely pests.