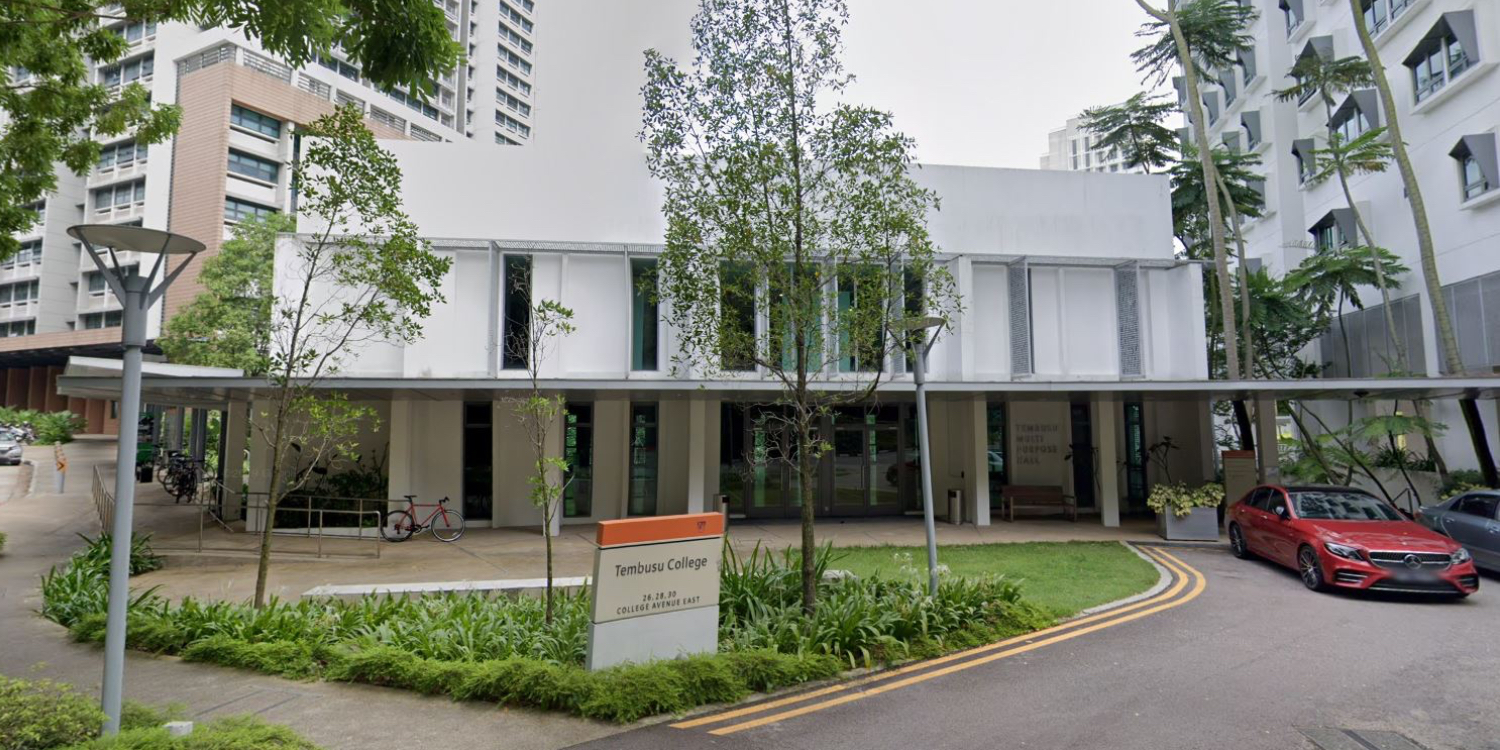 Over the last couple of years, several individuals at National University of Singapore (NUS) were embroiled in sexual scandals.

Students, however, expressed disappointment as little details were revealed regarding Dr Fernando’s case.

Now, they are demanding for transparency and accountability from the university, in addition to better support for survivors of sexual assault. 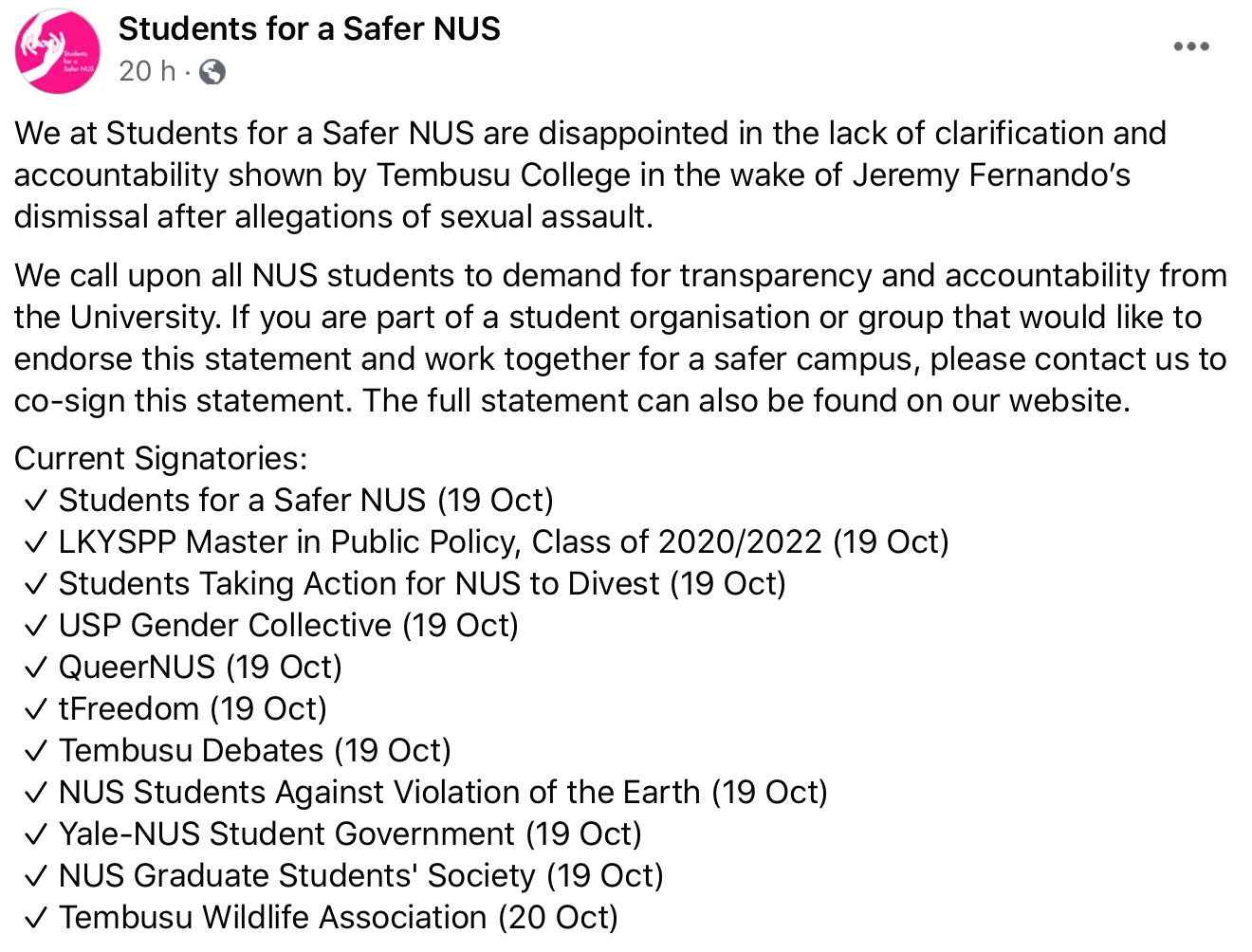 The university said they are aware of the students’ statements and will reach out to them “in due course”.

Student body – Students for a Safer NUS (SafeNUS) – launched a petition on Facebook on Monday (19 Oct) demanding clarification over what had transpired in Dr Fernando’s case.

They expressed disappointment at the “lack of clarification and accountability shown by Tembusu College” in the firing of Dr Fernando after acts of sexual assault were committed. 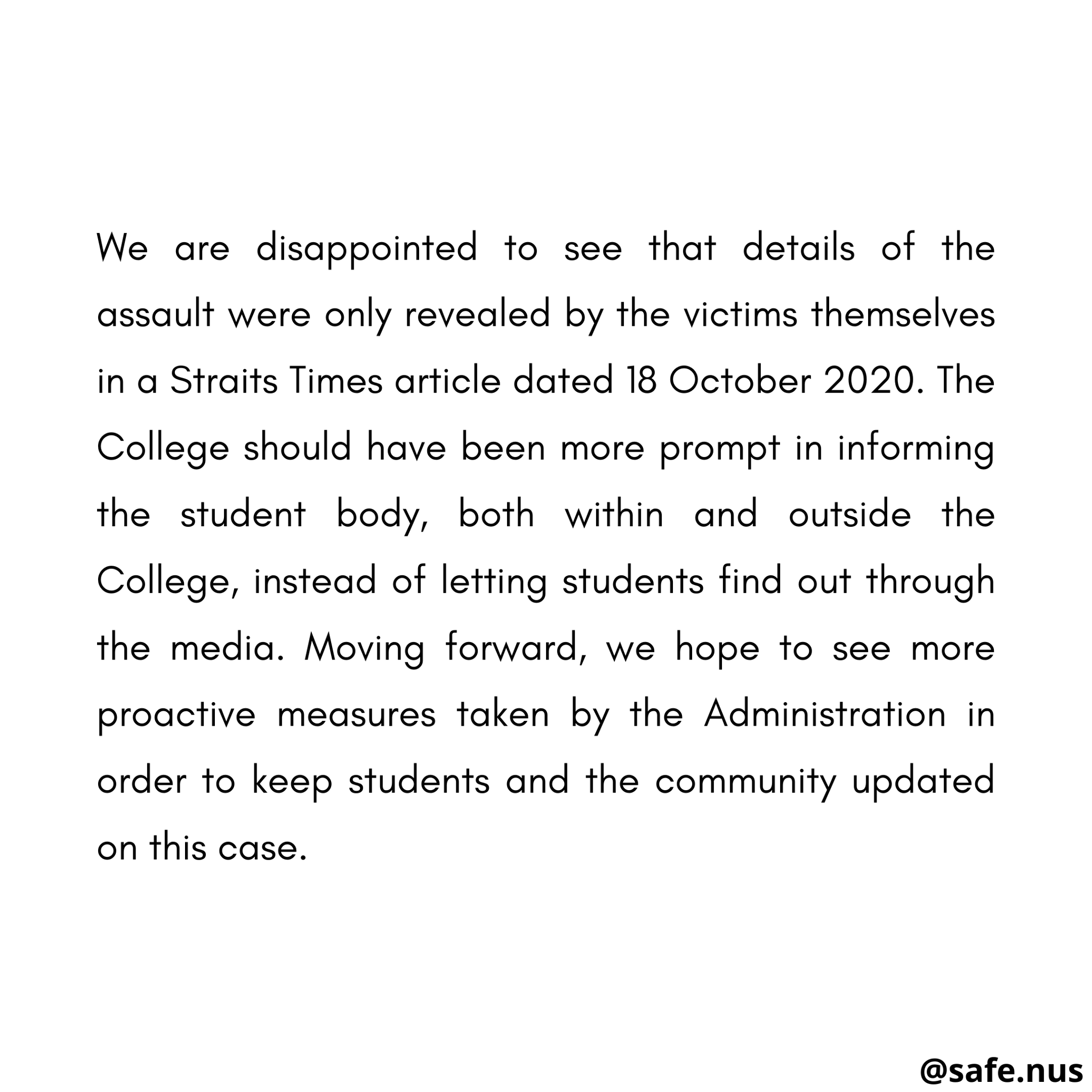 They called for a full statement by NUS to clarify what had happened in the interest of protecting students. 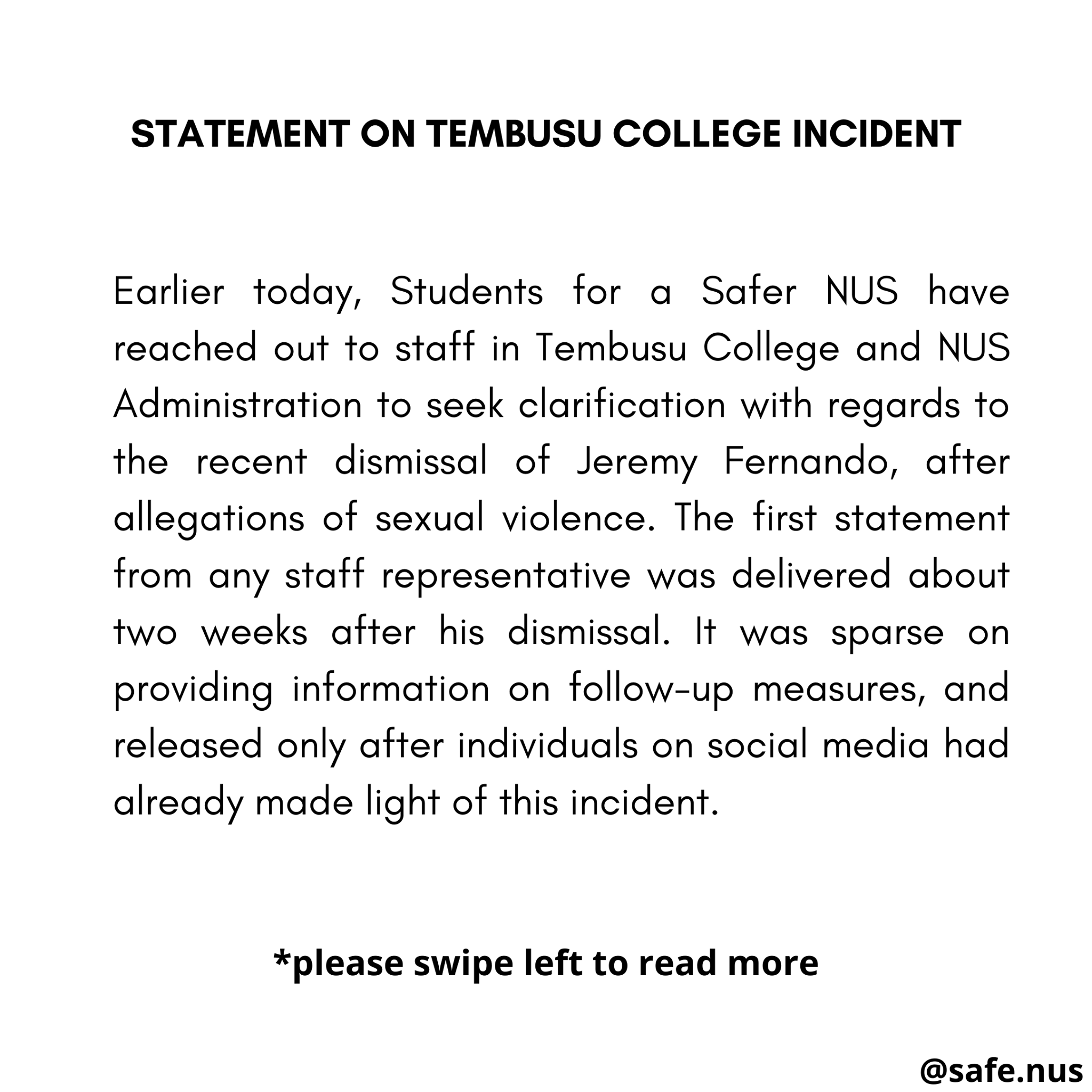 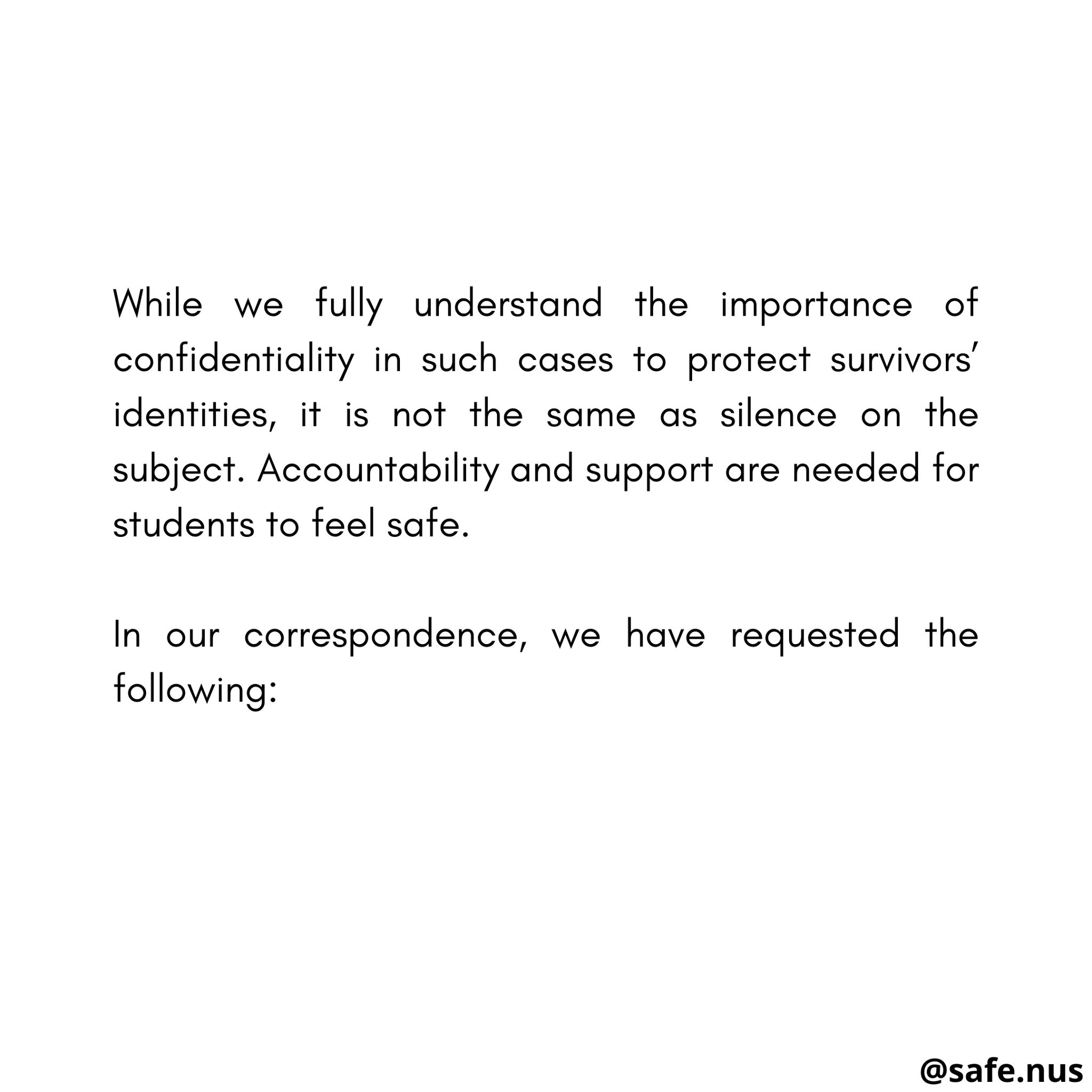 SafeNUS also asked all student organisations, who believe that the university needs to be proactive in ensuring students’ safety and clamping down on sexual misconduct, to endorse the statement.

At the time of writing, 11 student organisations had shown their support and solidarity behind this request. The signatories are:

An NUS spokesperson told CNA that they are aware of the post. They expressed thanks to students for raising concerns with the university.

We are studying their statements carefully and we will reach out to the student groups in due course.

4 other actions to protect students & provide support for survivors

Besides the call for a statement, SafeNUS is also petitioning for 4 other actions to be made or implemented at NUS:

You can read their demands in full here.

Sexual violence is not condoned

Even if punishment was meted out to the perpetrators, the damage has been done and survivors often have to live with the trauma, some even for years to come.

We hope at least reporting to NUS and the dismissal of the perpetrator helped the 2 victims achieve some form of justice.

It must truly be a challenging time and we hope they will heal from it in time.