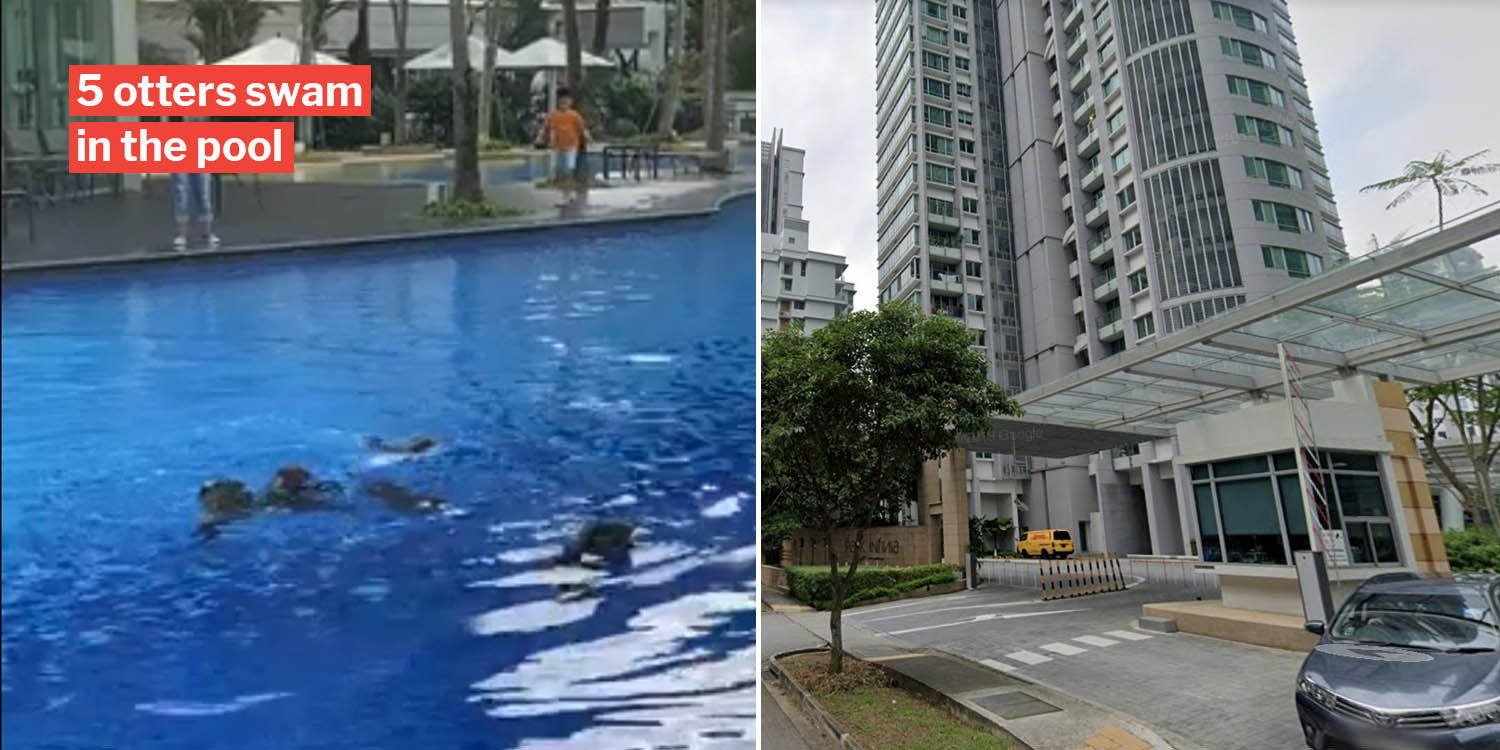 They look like they had an 'otterly' good time!

Update (9 Mar, 4.45pm): Facebook group Ottercity, who received videos and photos of the incident on Sunday (8 Mar), has identified the Otter family to be the Zouk family which calls the Botanic Gardens home. 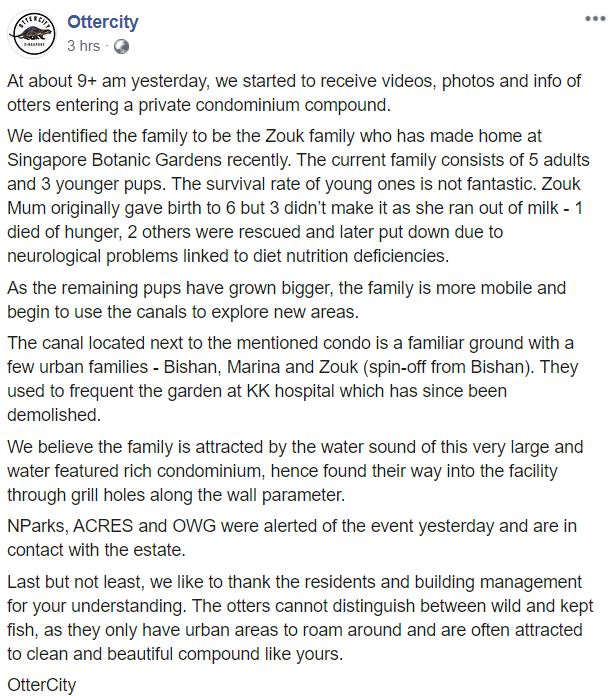 The canal next to the condo is apparently a regular route for several otter families. This one was probably drawn to the “water sound” at the condo.

NParks, ACRES and OWG are aware of the incident and are in contact with the condo management.

You’ve probably heard of the “5 Cs” that make an atas – or high-class – Singaporean: cash, car, club membership, credit card and of course, the ever lavish condominium.

It seems like these days, it’s not just humans who want these 5 Cs — a Redditor spotted these otters living it up in a condominium’s pool as they eat koi.

By koi, we mean the fish, and not the bubble tea that everyone loves.

It’s not clear when the otterly adorable ordeal went down, but a netizen posted the video on Reddit on Sunday (8 Mar) afternoon.

The video captures the otters splashing around in the pool, looking like they’re having a whale of a time. Or an otter of a time?

The otters allegedly caught some of the condominium’s decorative koi fish, and ate them in the pool.

The creatures’ swift moves are hard to follow, but one of the otters is definitely holding something orange in its mouth. A koi, perhaps?

While the koi fishes’ deaths were unfortunate, we have to remember that the otters were merely following their hunting instincts.

With our concrete jungle taking over their natural habitats, we can’t blame them for finding alternatives.

Condominium is next to a longkang

Some comments on the video pointed out that the condominium that the otters visited was Park Infinia, located between Newton and Novena at 4 Lincoln Road. Upon closer inspection, it looks like the back of Park Infinia is barely 20 metres away from a longkang, or large drain. They’re separated by just a narrow road and the sidewalk. 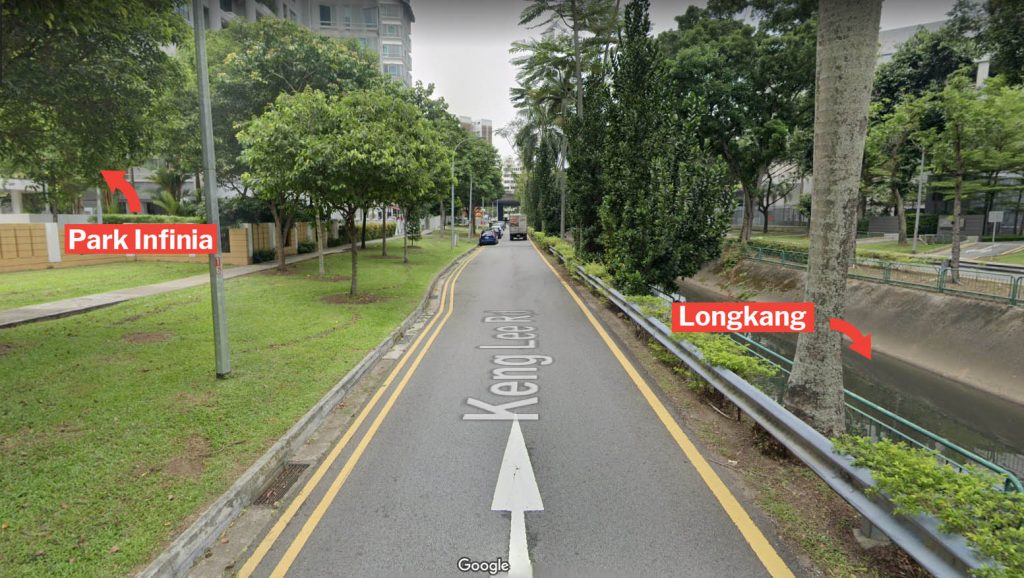 You can usually spot otters in large drains like the one near Park Infinia. It’s possible that they were swimming in the longkang and decided they needed a change of scenery.

Netizens more amused than angry at otters in pool

The comments left on the video showed that netizens were generally more amused than agitated at the otter situation.

Some of them joked that the otters were “High SES”, or “high socio-economic status”, since they feasted on ‘koi sashimi’ while spending an afternoon in the pool. 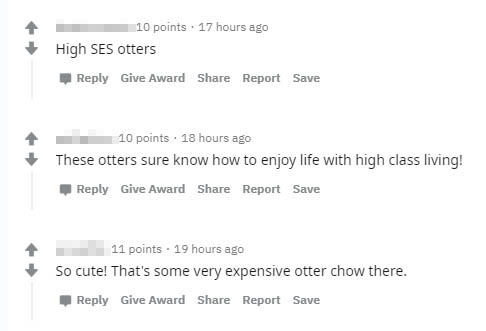 Others took the opportunity to make some otter-this-world puns: 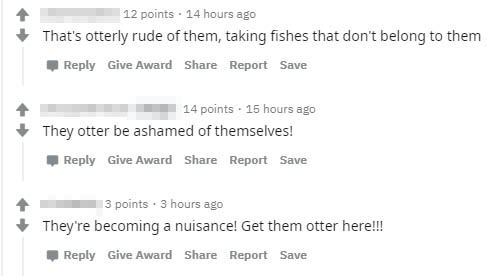 Some were concerned about them leaving their natural habitat for the condominium due to a lack of food.

Whatever the case, this was definitely an uncommon sight for many.

Hopefully, the residents weren’t too troubled by the otters’ visit, and that the pool has been cleared of any koi remnants.

We can’t say that the compound was lucky to receive these otters as guests, but it definitely provided the Internet with some great entertainment.