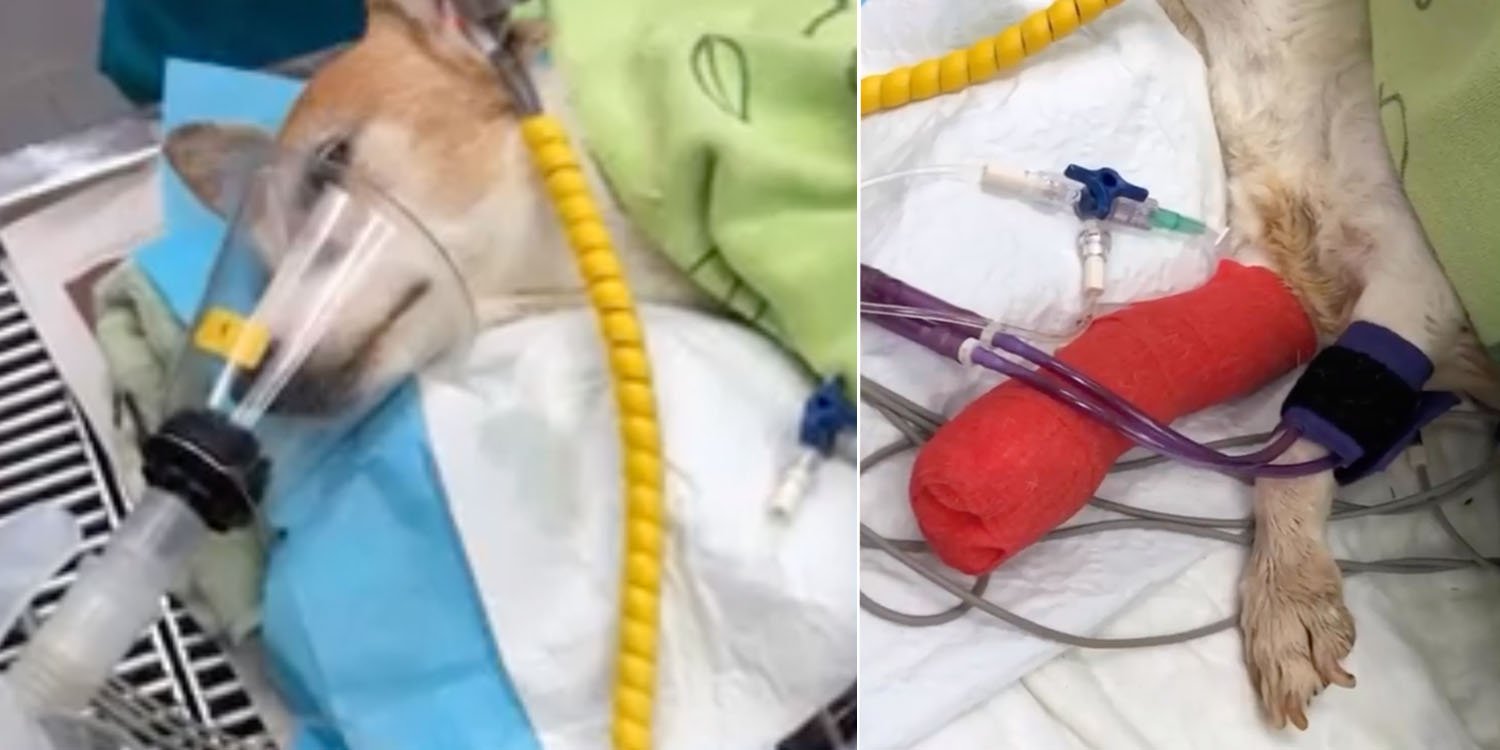 A few hours after our article was published, more customers have come forth with grave allegations involving Platinium Dogs Club’s practices. These involve 3 new cases in total, leading to the sickness and distress of 2 dogs and the death of another. 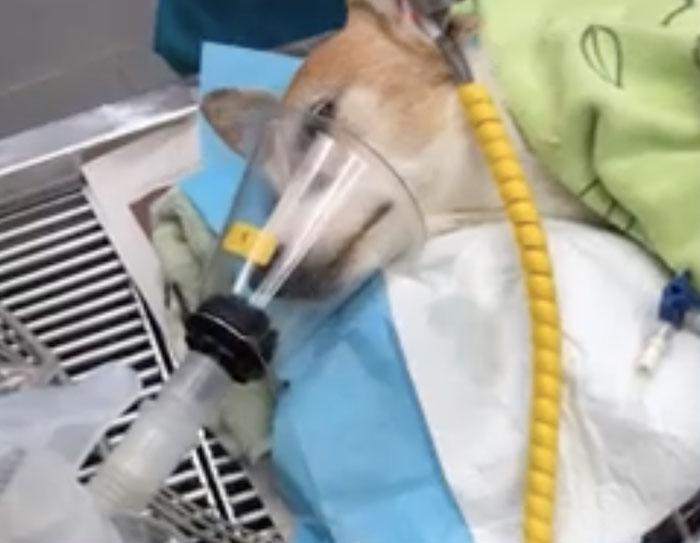 In a post dated 27 Dec, Ms. Png – the pet owner – claimed that her dog QQ died at the vet clinic, after his stay under the care of ‘Rachel’ from Platinium Dogs Club.

QQ’s condition apparently took a turn for the worse when Rachel contacted Ms Png on Wed (26 Dec) morning. Ms Png then asked Rachel to send QQ to the usual clinic which he frequented.

Ms Png was dissatisfied that the boarding house allegedly failed to contact the emergency contact when her dog’s condition worsened.

QQ unfortunately passed away shortly after, at the clinic. 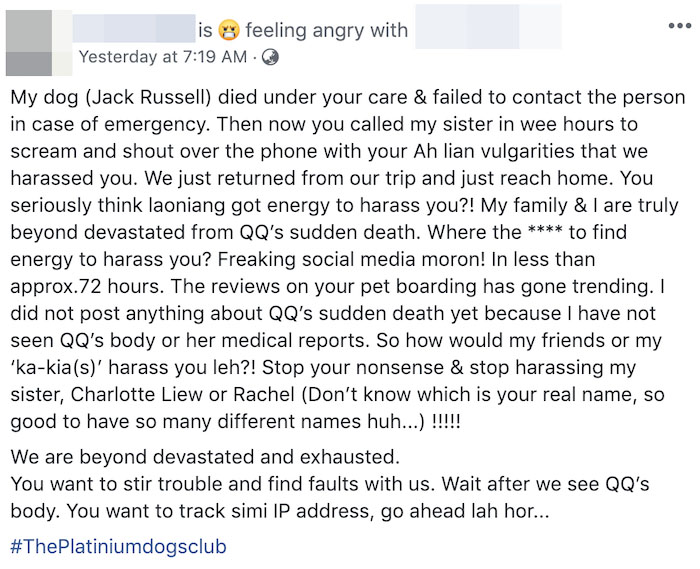 Ms Png also shared screenshots of her conversation with Rachel over WhatsApp.

Rachel counter accused Ms Png of harassment, as she believed Ms Png created a post about her dog online. Ms Png claims that at the time of the conversation, she had not shared anything on Facebook about the incident yet. Rachel refused to believe that Ms. Png was not behind the online posts and threatened to contact the police and track her IP address. 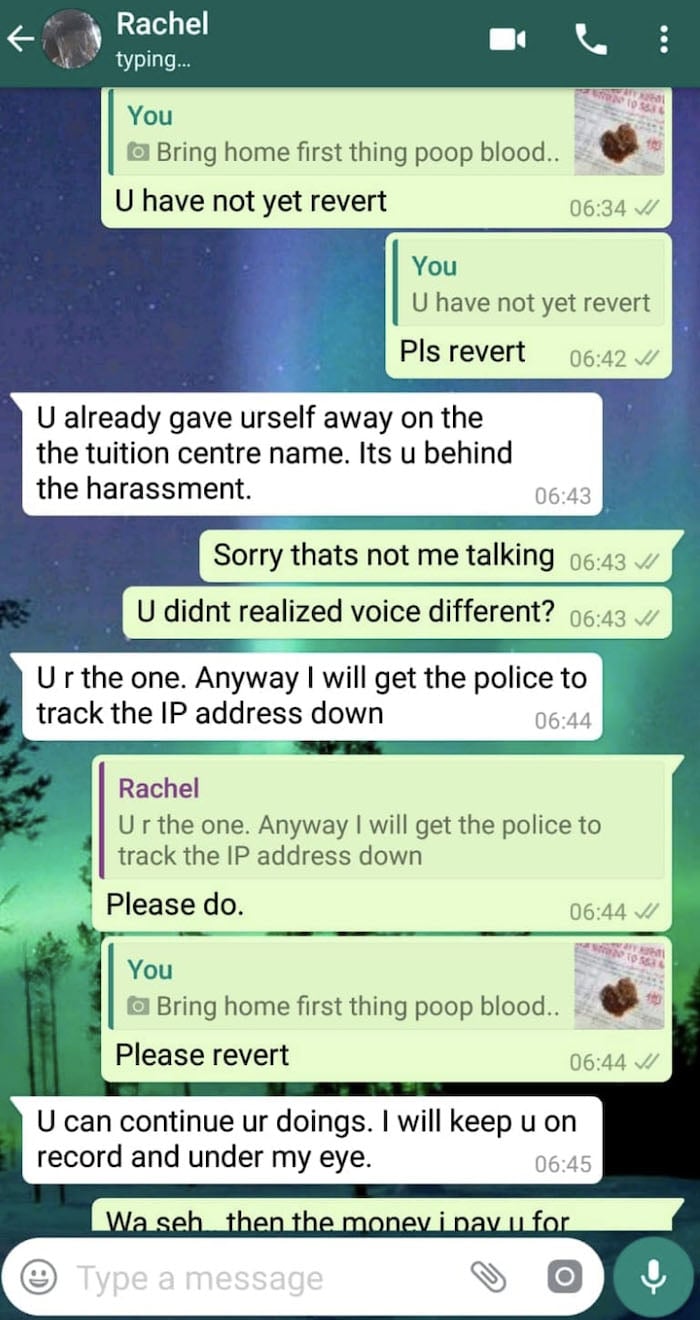 Next, Rachel claimed that she received harassment forms so she wanted to settle the case legally. 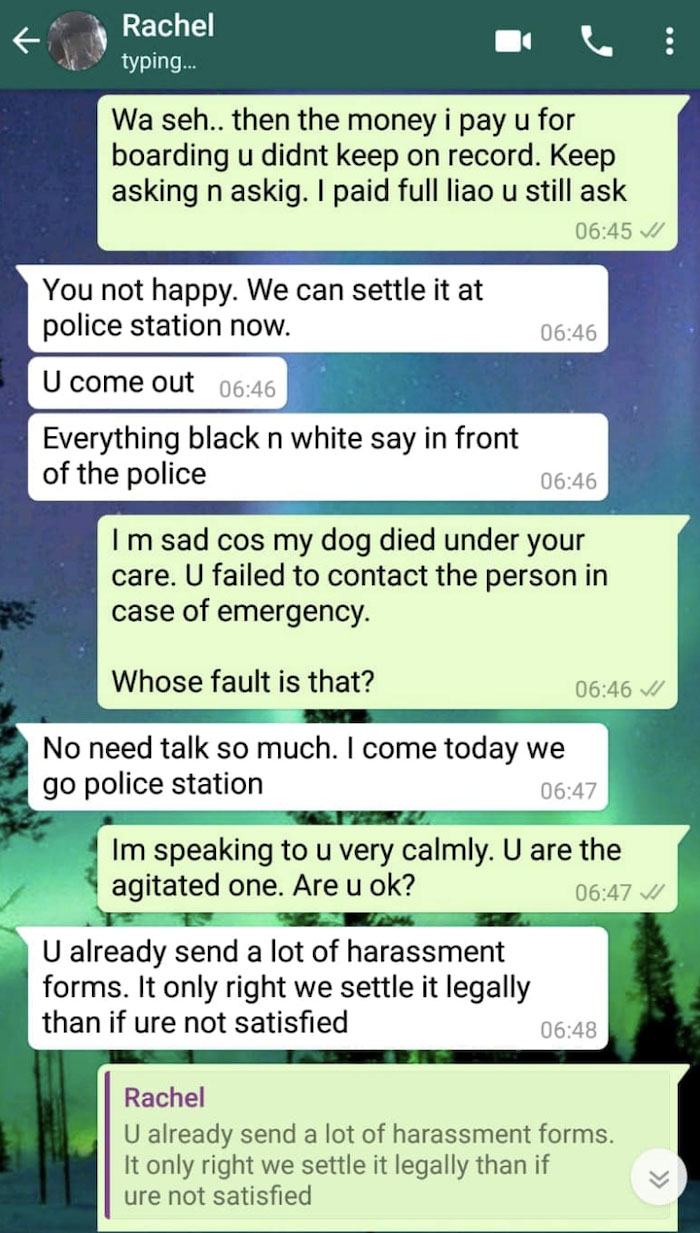 Despite Ms. Png’s denial about her involvement, Rachel threatened to file a complaint in the police station. 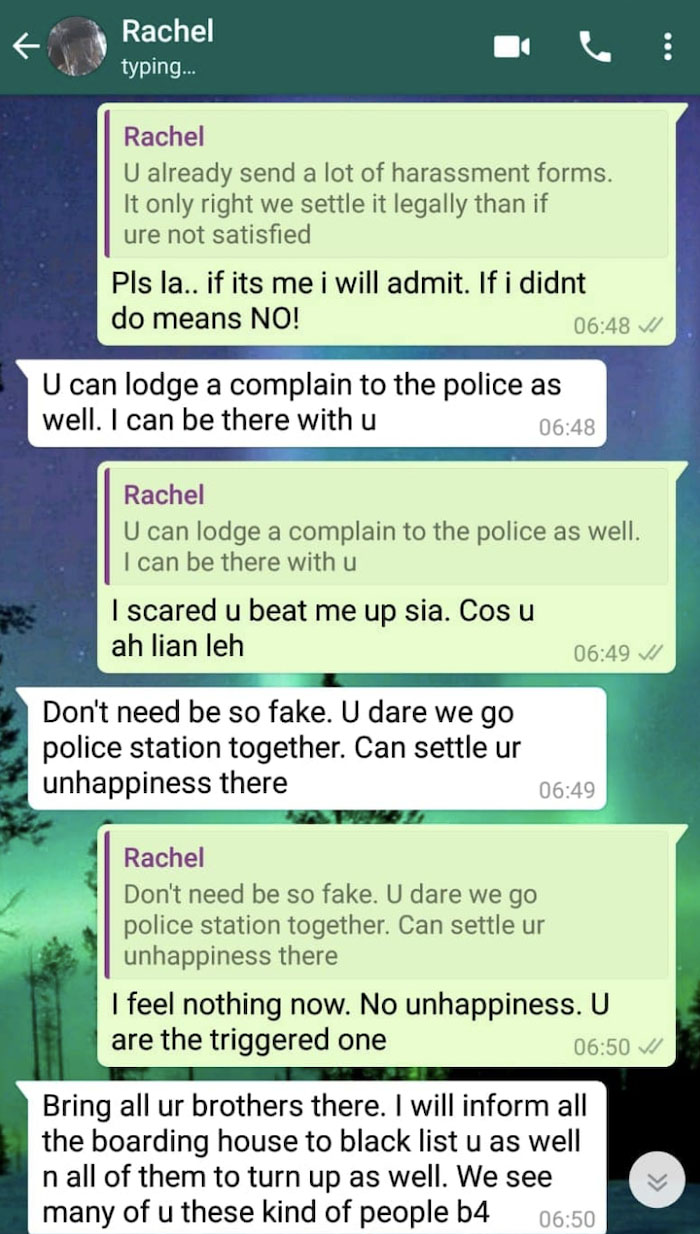 Rachel then threatened to blacklist Ms. Png from all dog boarding houses. 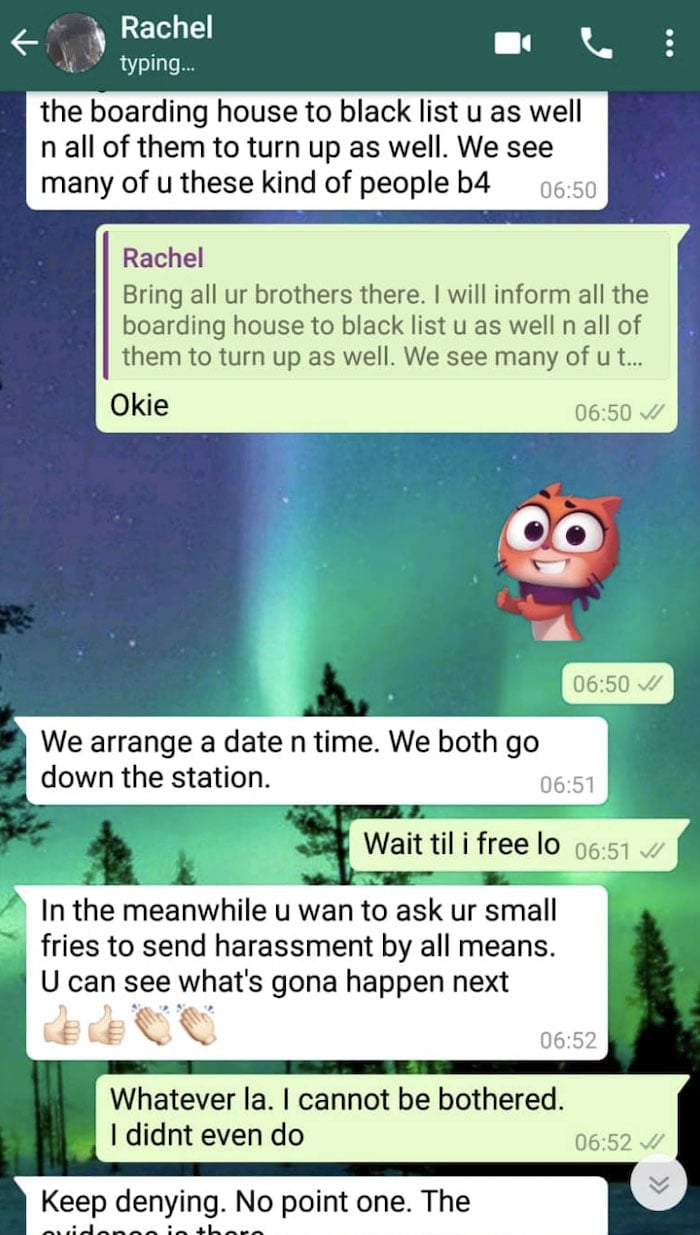 Ms. Png wanted to talk about a picture of her dog’s bloody stool which she identified as the cause of its death, but Rachel told her to “be gone like the wind”. 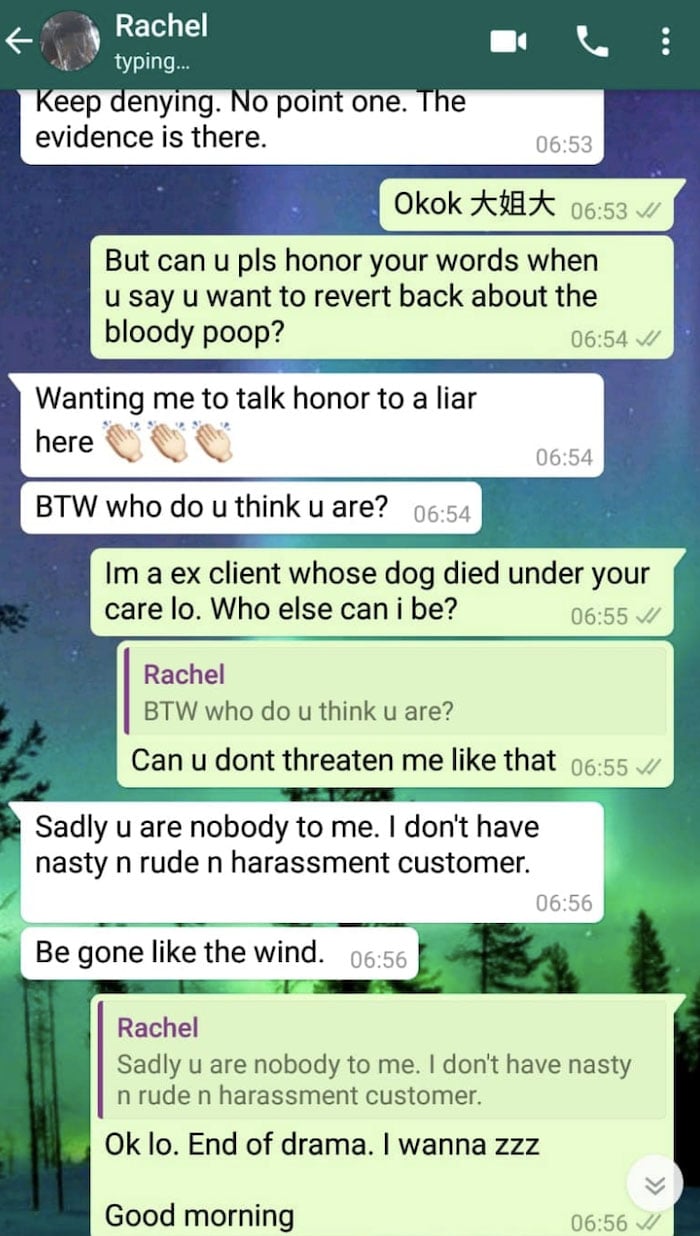 The drama continued with Rachel’s insistence that Ms. Png sent her harassment forms. 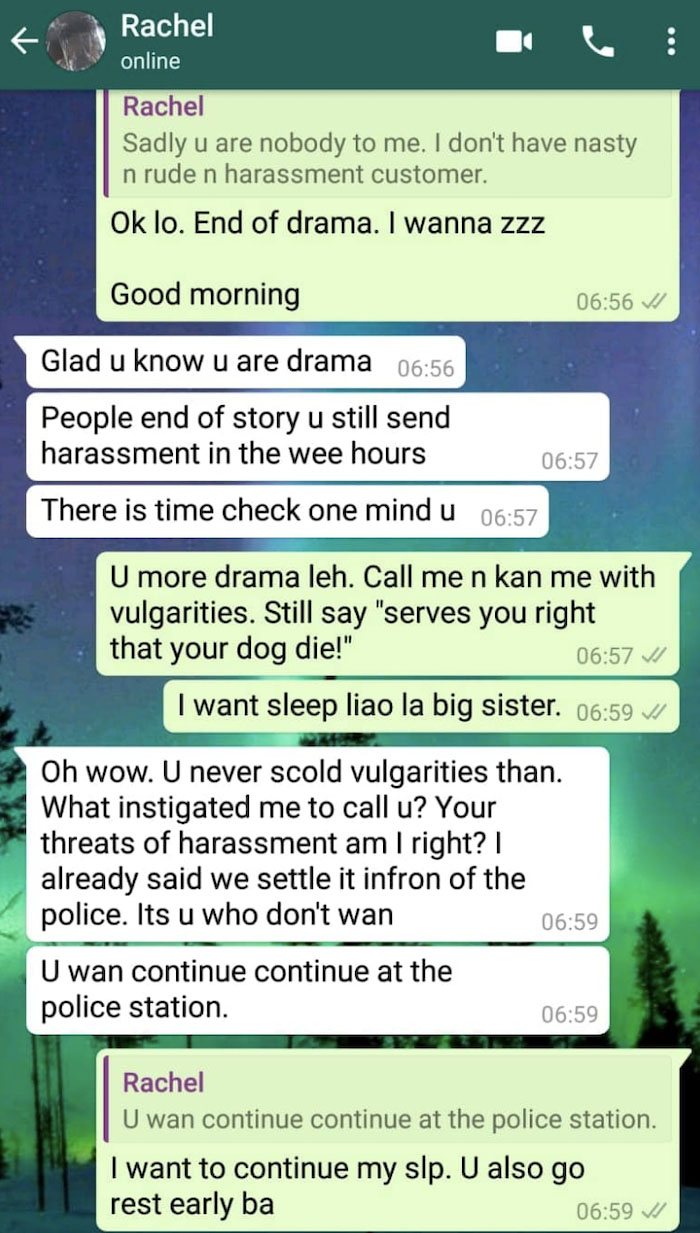 Pet owner Ms. Lee claimed that her Japanese Spitz – coincidentally also named Rachel – was almost unrecognizable when it was returned to her.

Similar to the first two cases, she also claimed that her dog was soaked in urine and faeces in a lengthy Facebook post on 28 Dec.

In this case, Rachel from Platinium Dogs Club countered that Rachel the Spitz had finished the food Ms. Lee sent to them. Ms. Lee believed that it was impossible for her dog to finish the contents of the entire container and suspected that her dog was unfed during its stay. 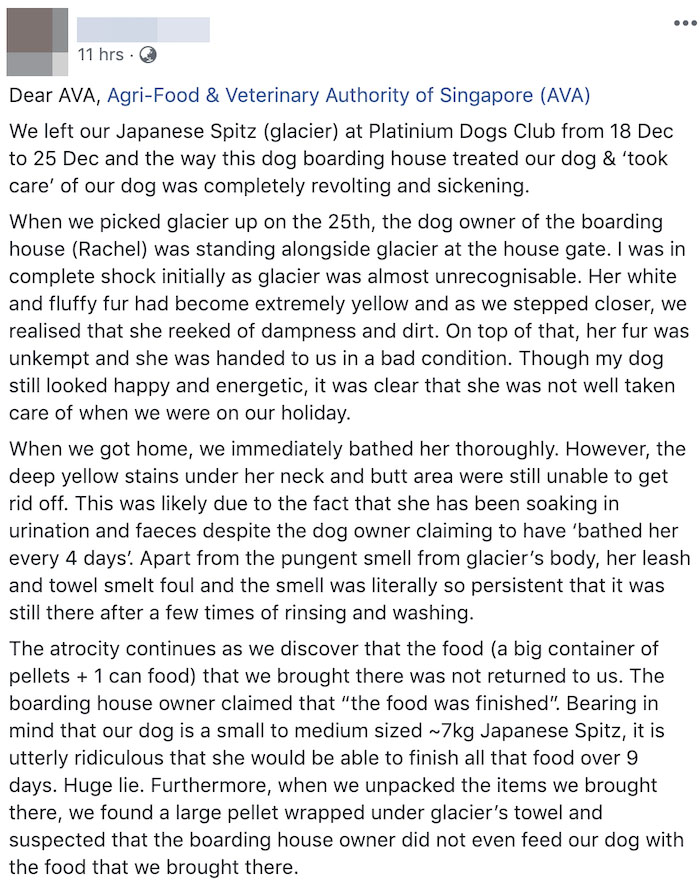 As she was picking up her dog, Ms. Lee reported that she saw a man wearing “dog cremation service” attire.

After watching a Channel 8 news broadcast about a dog’s death in the third case, she believes that the pet boarding house must be “shut down permanently”. 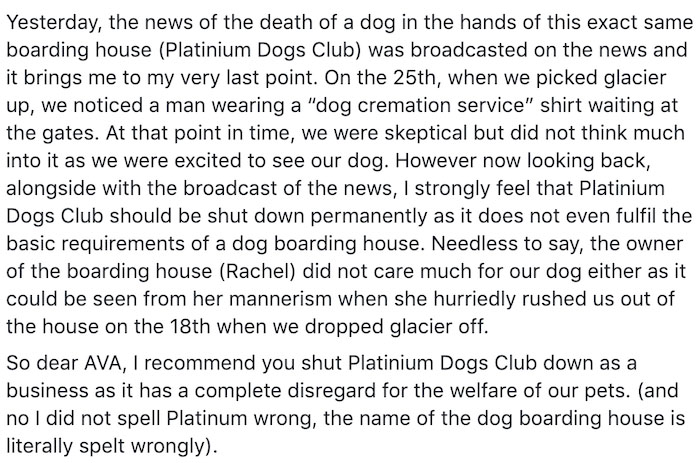 The fifth case is an allegation by Chained Dog Awareness Singapore — a volunteer-run advocacy group for chained dogs.

They claim that a blind Cocker Spaniel named Sparky was in the care of the person or people behind Platinium Dogs Club. 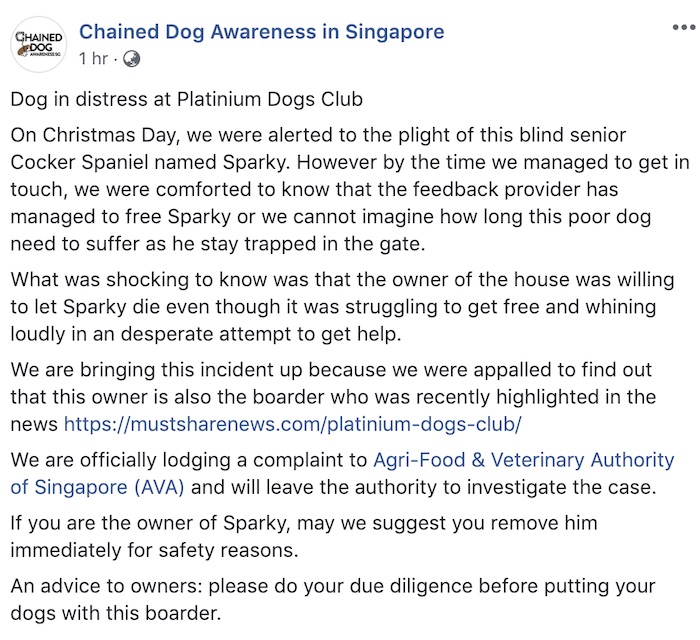 They claim that the person who sent in the tip-off managed to free Sparky after it appeared to be “in a desperate attempt to get help”. 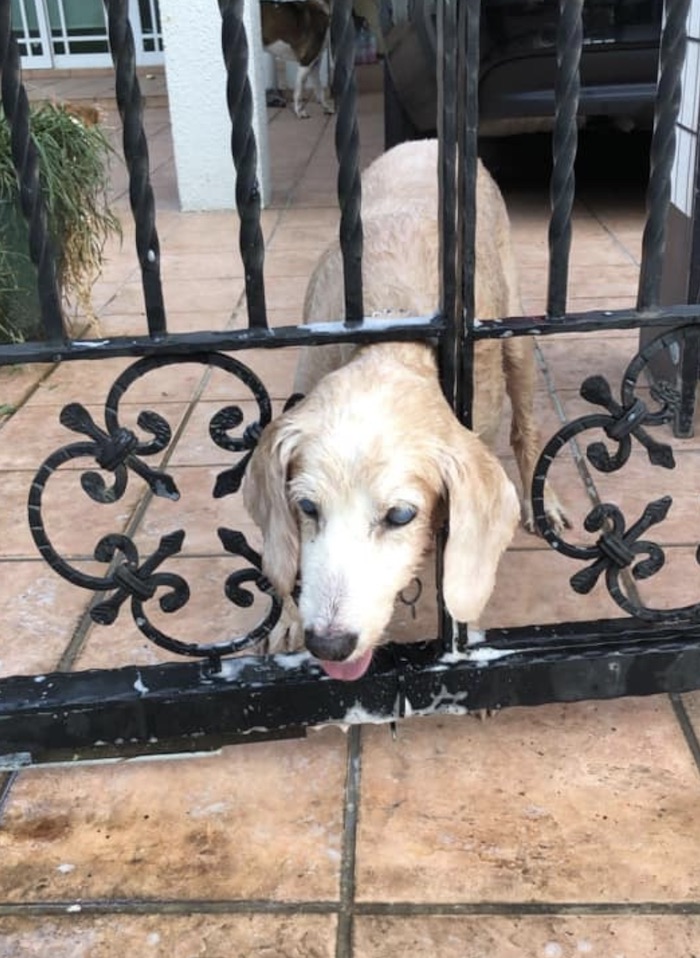 CDAS has lodged an official complaint with AVA regarding the matter.

IP address with 2 other domains

In a previous report, we mentioned that Platinium Dogs Club has since taken down their website. 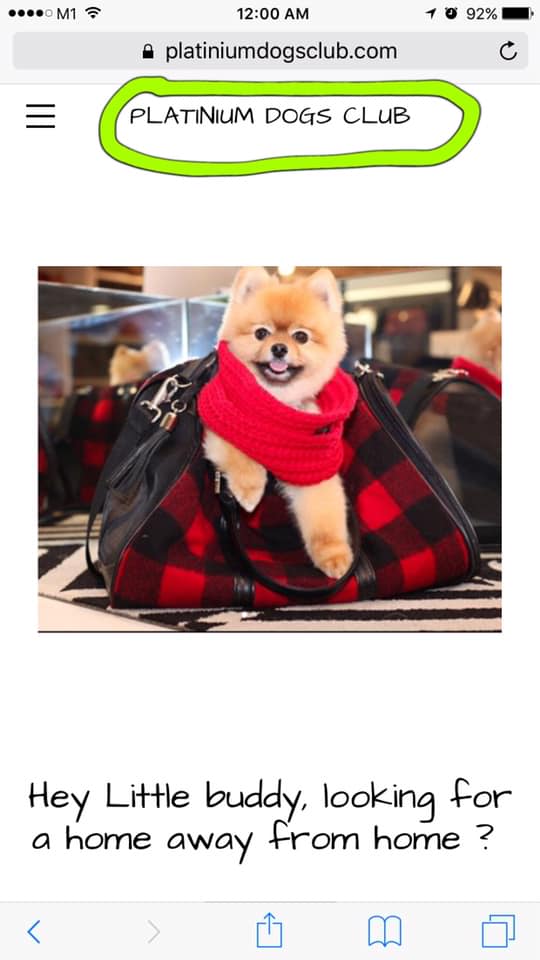 One concerned netizen has traced the IP address of the site to 2 other domains registered under one ‘Charlotte Liew’, who bears the same surname as ‘Rachel’. 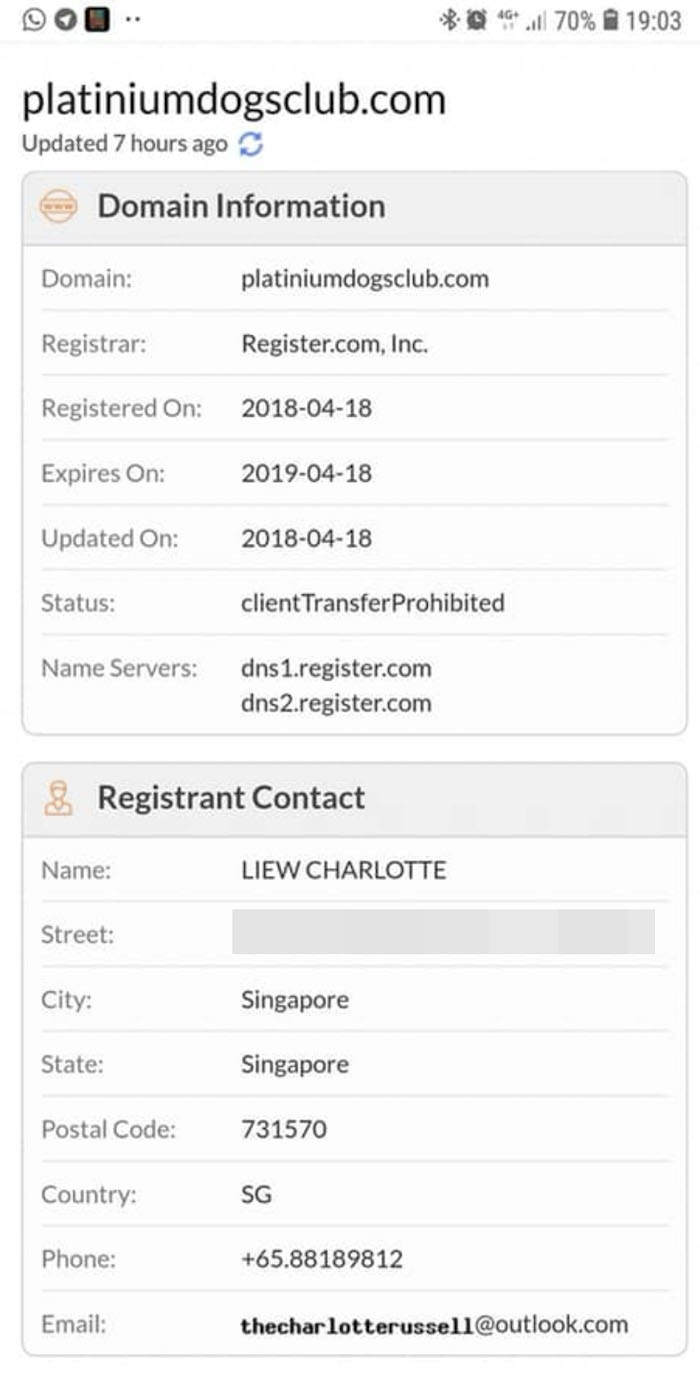 ‘Rachel’ allegedly operates an online florist and tuition centre, claims the netizen. Unlike the pet boarding house’s website, the two other domains are still accessible. 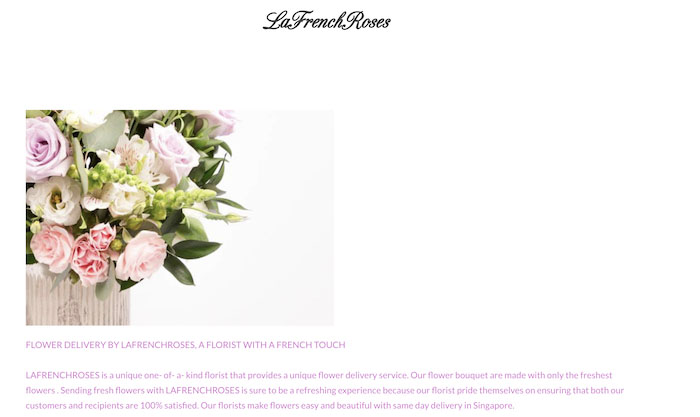 While Raffles Tuition Centre matches students with suitable tutors. Interestingly, no pictures are found on this website. 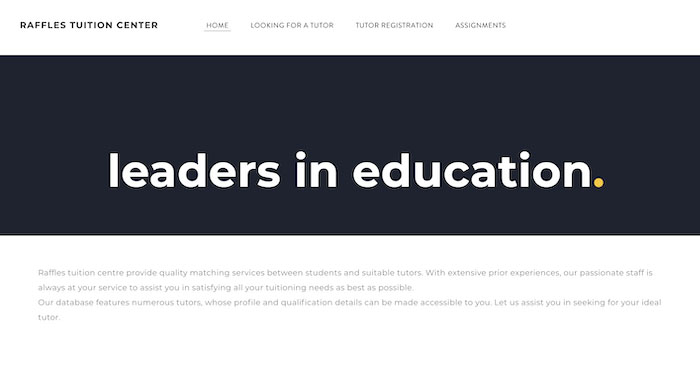 Through concerned netizens’ comments, we also found that Platinium Boarding Club is based in three locations.

The same netizen who discovered the 2 domains further investigated the legitimacy of the businesses’ registered information. She contacted AVA and inquired about the boarding house’s Galistan Avenue address.

AVA confirmed that the location is a residential area. 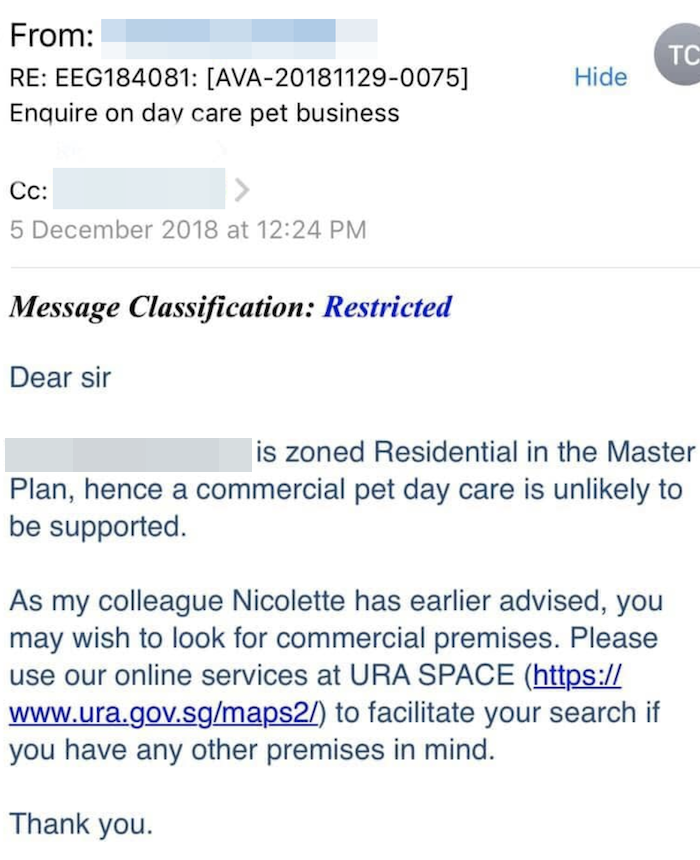 When the netizen traced Platinium Dog House’s domain’s address, it was registered in Woodlands Avenue.

However, a previous customer posted that the business was within Eco Sanctuary Condominium too. Hoping dogs will be okay

There you have it, 5 cases about Platinium Boarding Club in one week.

We’re still not sure about the exact location of the pet boarding house — but we believe that the authorities should consider launching an investigation into all these cases.

Once again, we’ve reached out to AVA to clarify if the pet owners involved can seek any compensation or legal recourse for their alleged cases.

Most importantly, we wish the 3 dogs a successful recovery and MS News extends our heartfelt condolences to Ms. Png’s family for their loss.

If you have any information about these incidents, do feel free to contact us at hello@mustsharenews.com.