On some occasions, they may have to refute potentially damaging public allegations against them, like the recent Yishun incident involving an elderly lady.

Earlier this week, a man recounted in a Facebook video how he was allegedly mistreated by the Singapore police last February after being arrested for drink-driving. 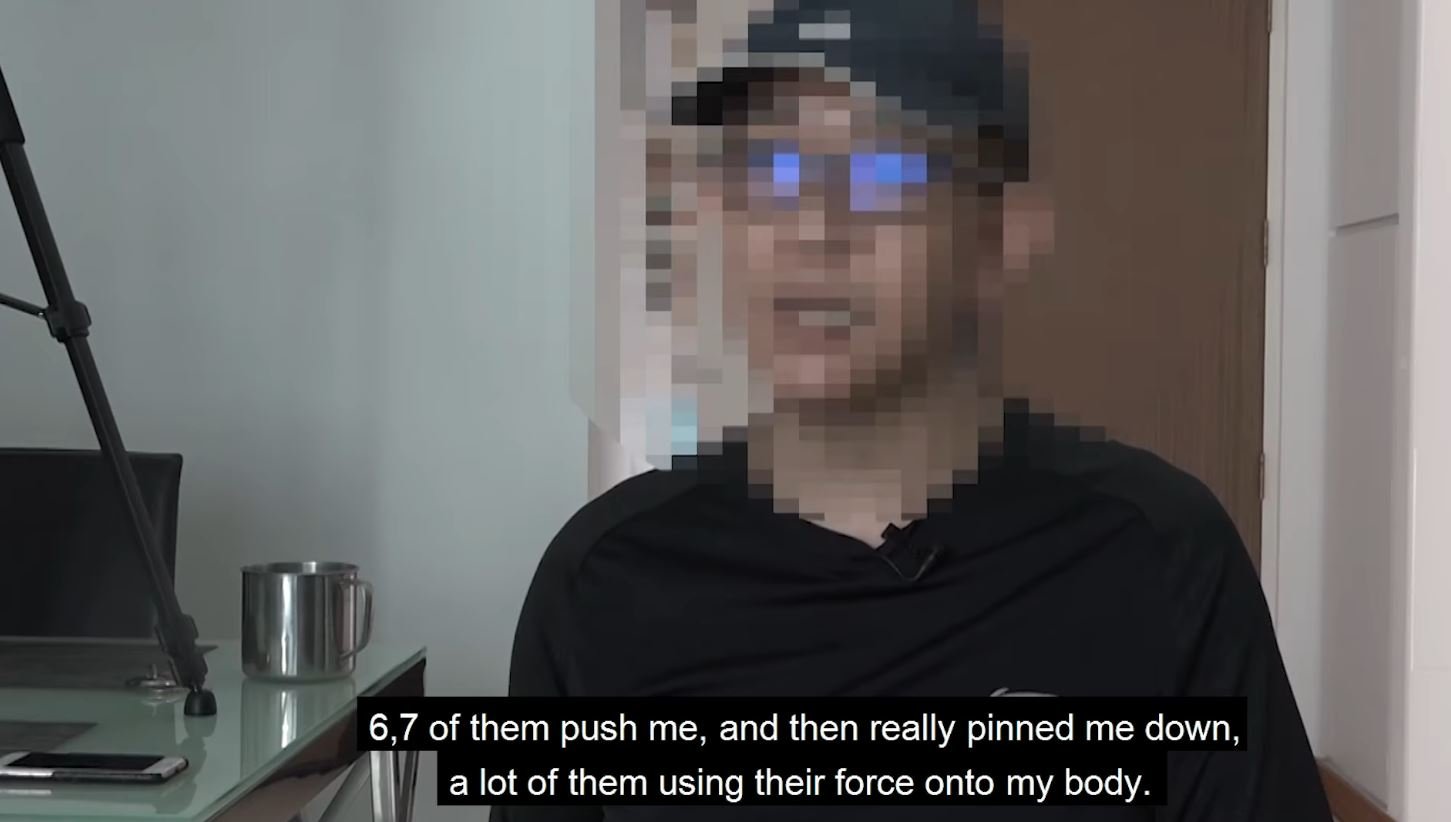 The police have since issued a statement describing the account as “misleading”. We summarise both versions of events below.

On Monday (28 Jun), The Online Citizen (TOC) released an interview they conducted with a man called See, where he alleged instances of mistreatment during his arrest last February.

According to See, he was driving home in the early hours of 14 Feb 2020 when he was stopped at a roadblock in Boon Keng.

He said he remembered drinking about 1-2 cups of beer with his mates at a pub before the journey home.

Upon completing his breathalyser test, officers informed See that he’d have to head down to Cantonment Police Complex for further examinations. 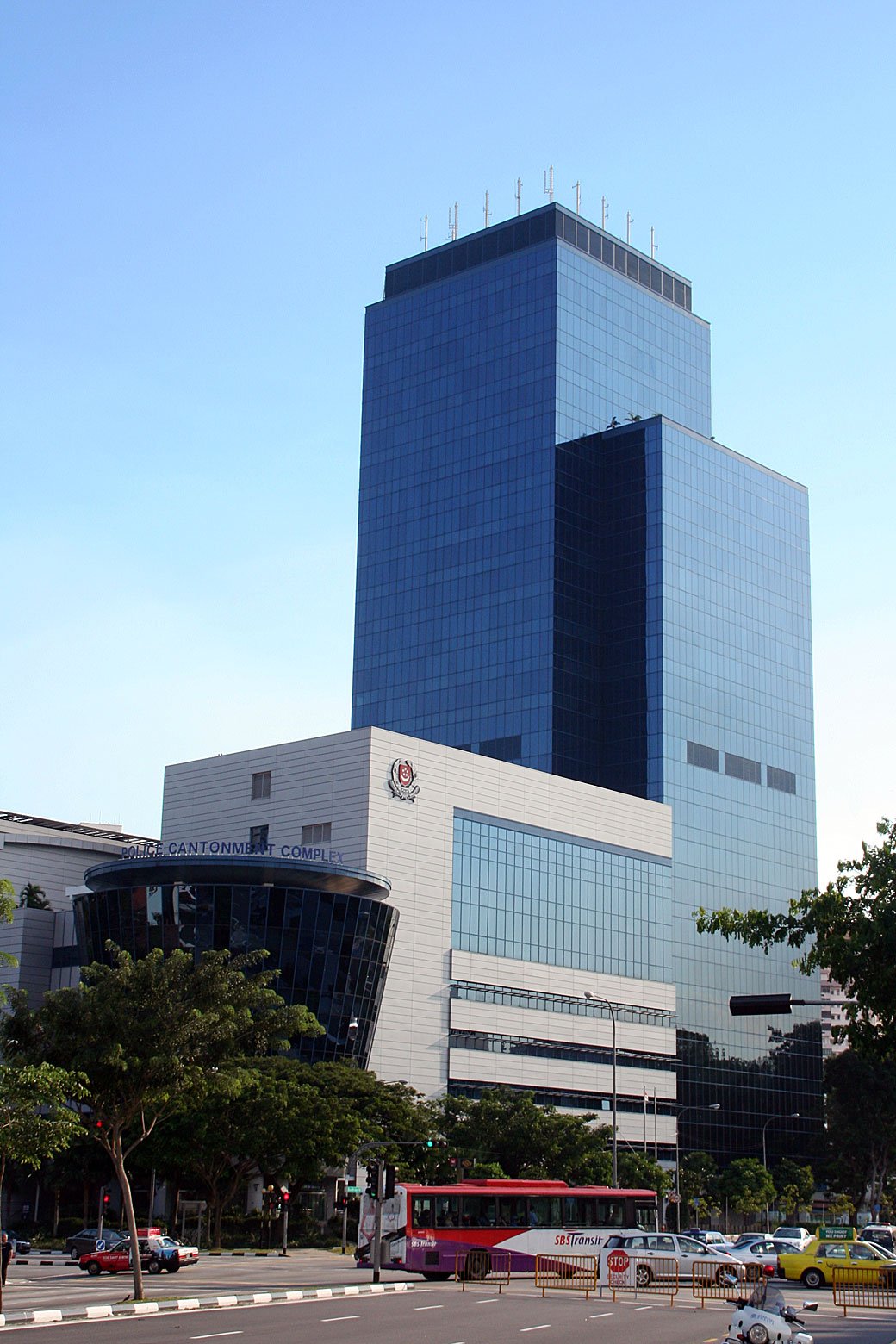 At the police station, he was required to perform another breathalyser test.

After several attempts, the test recorded that See had 31 microgrammes of alcohol in 100 millilitres of breath, slightly below the legal limit of 35.

Having passed the test, an officer then brought him to a waiting room that overlooks the main office.

However, See’s claustrophobia started acting up when he was in the room. 5 minutes later, he alerted officers that he was scared and had difficulties breathing.

Police officers suggested placing him in a padded cell

After conveying his fears, See was allegedly told that he would be placed in a cell instead. The thought of it triggered his fear again, so he told the officer that he might injure himself while inside.

Upon hearing this, the officer allegedly said he would then be placed in a padded cell lined with cushions.

See said he experienced palpitations once he heard this but was assessed to be all right after a medical examination.

The man was then escorted back to the cell in a wheelchair. When he wanted to call his family members, officers allegedly denied his request.

See recounted being fearful when he saw the cell door and once again begged the officers not to put him inside.

However, See alleged that the officers insisted that he returned to his cell and ended up using force. The officers were claimed to have:

Later, See said he wasn’t allowed to go to the toilet. Unable to hold the urge anymore, he said he relieved himself in the padded cell.

He also claimed that no food was given to him.

Suffered abrasions & a laceration on his right knee

Hours after his release, See visited a police post in Toa Payoh to lodge a complaint, highlighting injuries he suffered during his arrest. 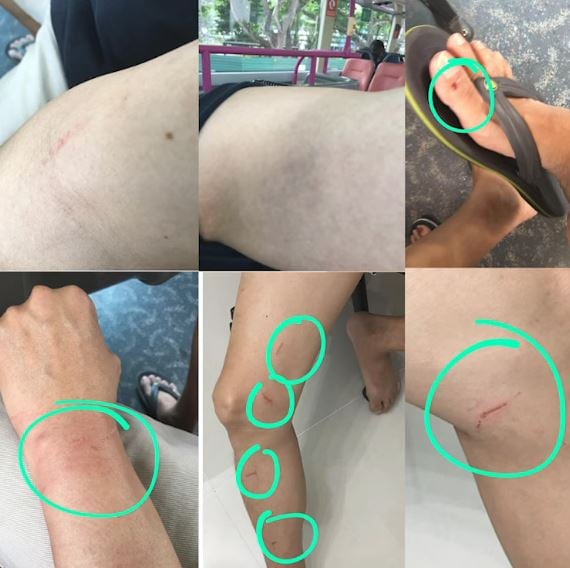 Later during his medical assessment, doctors found that he had sustained abrasions and a laceration on his right knee and that a third party caused the injuries. 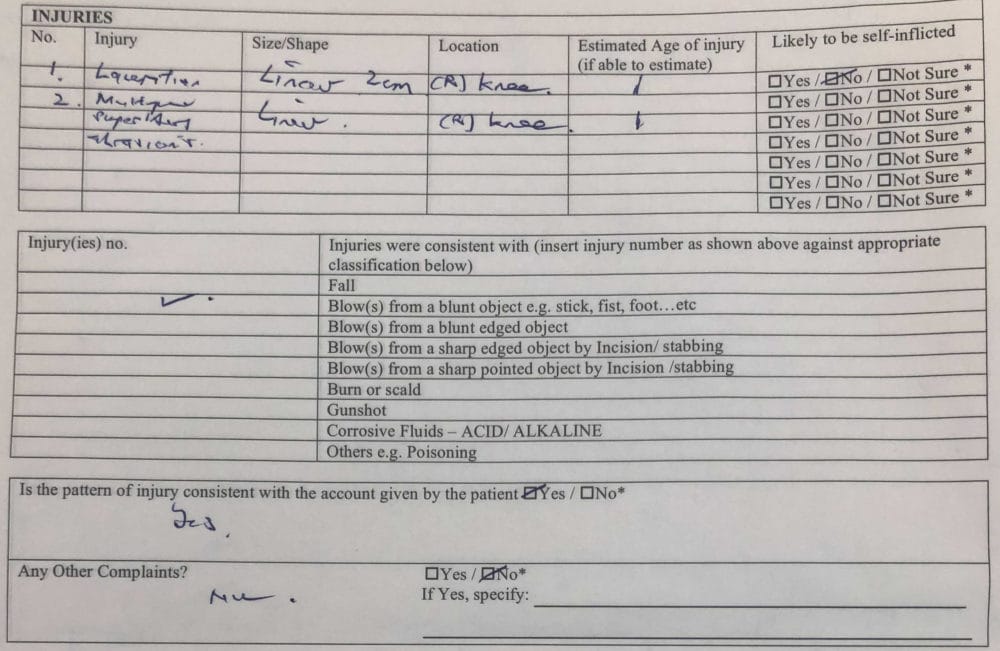 See then visited Punggol Polyclinic to have his right foot X-rayed. However, no injuries were found despite him experiencing pain.

Yet, See claims the pain on his foot still lingers 1 year after the arrest. You can watch the full interview with See here.

On Tuesday (29 Jun), the police issued a statement on Facebook debunking the allegations, saying See’s account was “misleading”.

According to them, See had “put up a strong resistance” when entering the padded cell, and officers had to use the necessary force to place him in the room.

The police said they could not accede to See’s request to wait along the corridor as it would affect movement in the facility.

However, during his request at 6am, officers found that he was asleep when they returned with extra manpower to facilitate the movement.

Later at 6.25am, See was also found sleeping and hence was not served breakfast.

Responding to See’s claims that he was denied calls to his family, the police said they could not find records of him making such a request.

Additionally, the police said See was walking normally when escorted by officers out of the padded cell. This was presumably in response to See’s alleged injury to his right foot.

The other injuries were described as “minor” and reportedly consistent with his struggles as officers attempted to put him in the padded cell.

After reviewing CCTV recordings and conducting internal investigations, the police said they did not find any abuse or wrongdoing.

Man expresses displeasure over mention of full name on Facebook

In response to the police statement, See said in a TOC article on Wednesday (30 Jun) stressing that he wasn’t properly notified of his arrest.

Additionally, he claimed that the lock-up area was large enough so he could sit at a corner and not in a padded cell.

See also protested the police’s mention of his full name on Facebook,

Is SPF trying to intimidate me and my family members so that I will not pursue the matter any further? Does Personal Data Protection Act (PDPA) still exist?

You can read the response in full here.

Hope the matter will be settle amicably soon

Through the interview, it’s clear that the arrest was a rather unpleasant experience for See. However, police have publicly refuted his claims, labelling them as misleading.

While we would never know what truly transpired that night, we hope this incident gives both parties the chance to settle the matter amicably.

As for the rest of us, it’s best not to drive after drinking to avoid running into trouble with the law, even if it’s just a glass or 2.

Featured image adapted from The Online Citizen Asia on Facebook.