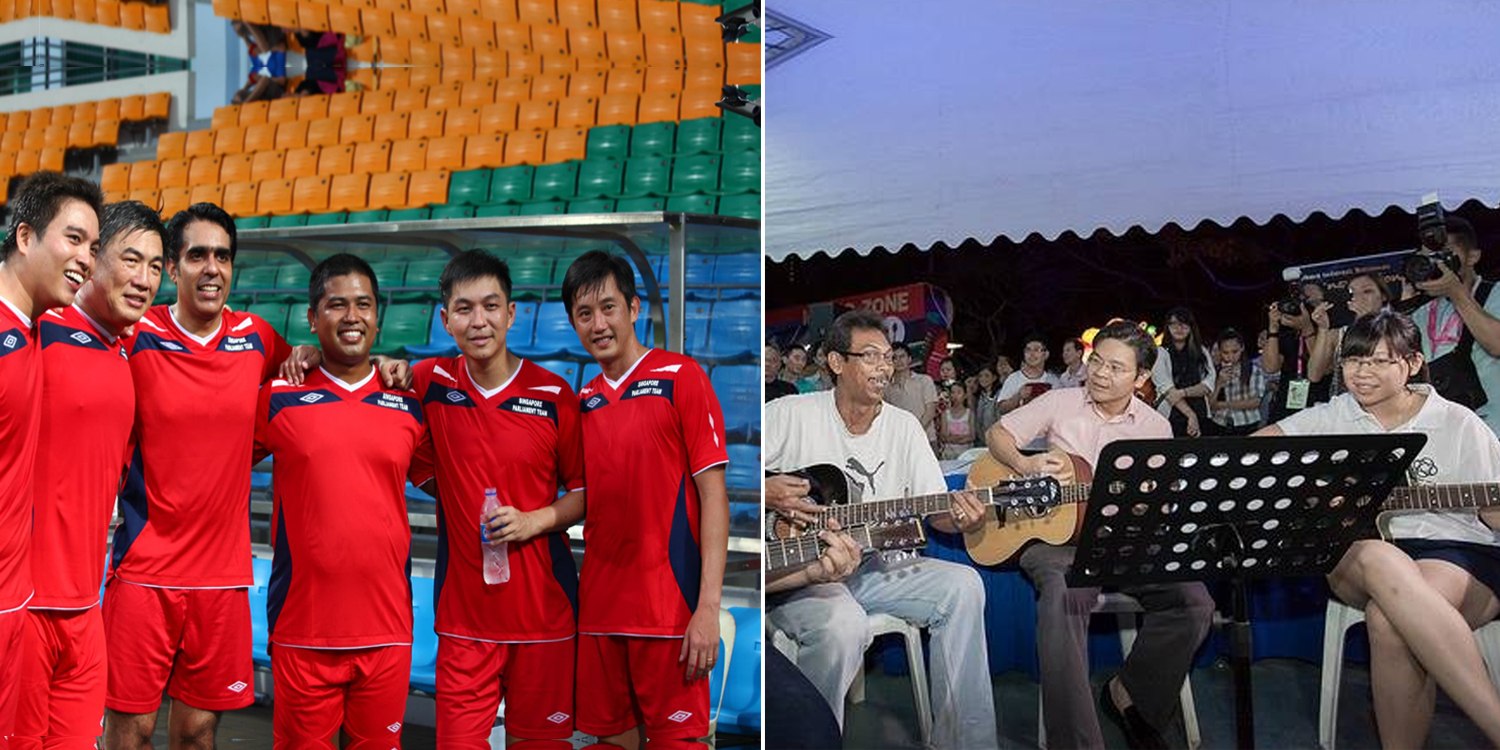 We know our politicians for their fiery speeches during election rallies & spirited debates in parliament.

But what do they do outside of tabling policies to run our country?

We’ve scoured the internet and found some pretty interesting yet lesser-known facts about what our politicians do in their free time.

So here are 9 Singaporean politicians with hidden talents like guitar-playing, bona fide soccer athlete & a passion for vinyl.

We here at MS News are avid fans of some good ol’ classic jazz music. Which is why we were enthralled when we saw this video of our Minister for National Development jamming out after a charity event. 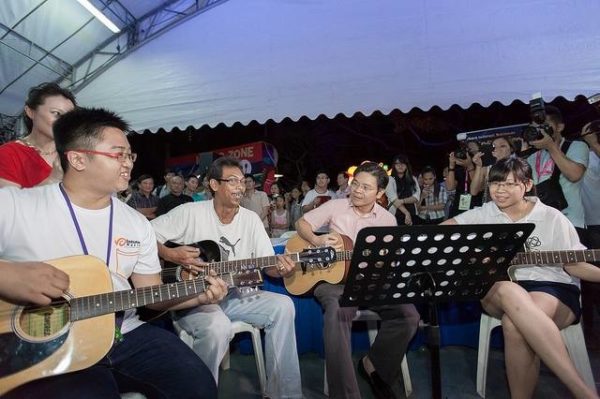 In a video posted by Dilithium Crystals on YouTube titled ‘Lawrence Wong’s hidden talent’, Mr Wong is clearly having the time of his life strumming the guitar to a snazzy tune. Most notably, playing alongside him is distinguished maestro and Singapore’s “King of Swing” Jeremy Monteiro.

Throughout their short jamming session, Mr Wong was able to keep up with the fast-paced tempo of the song. All while exchanging exuberant smiles with the legend on the piano right next to him. 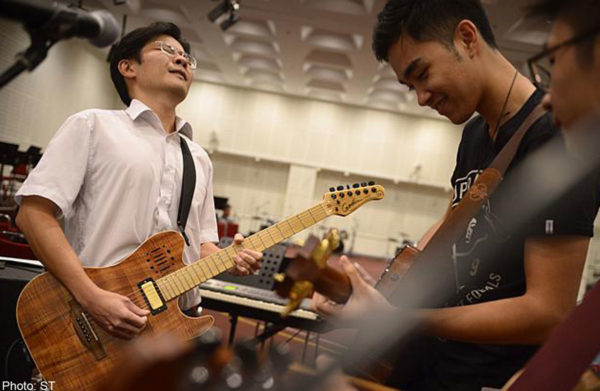 Clearly, this isn’t Mr Wong’s first rodeo. He has also performed at an Istana garden party, as well as a ChildAid charity event, rocking out on a wood-panelled electric guitar.

Our Prime Minister has proven himself to be an effective and reliable leader, especially during the Covid-19 period. And of course, who could forget his dry sense of humour — throwback to his subtle grin after drinking out of that nifty teacup.

Those however, aren’t our PM’s only admirable traits. In a Facebook post back in 2015, Mr Lee shared that he had actually written a program for Sudoku. 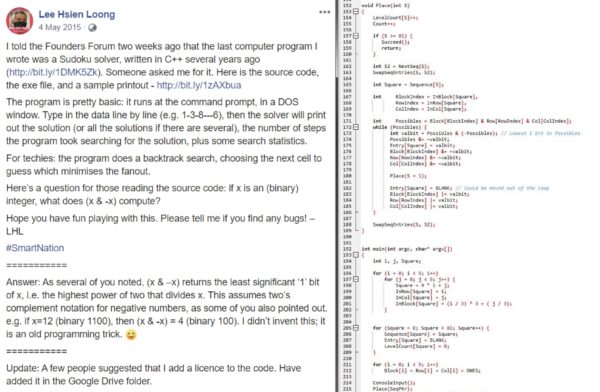 He went on to share the source code and other materials from his creation that people could use. Needless to say, many were awed by his hidden talent. 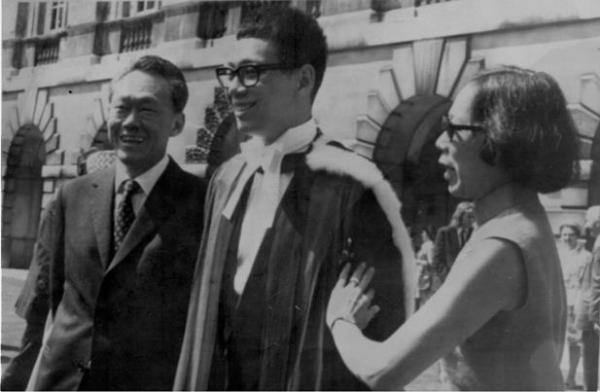 Perhaps coupled with the knowledge that he has a degree in mathematics from Cambridge University, it would come as less of a surprise that PM Lee bravely embraces geekier endeavours too.

When we say “the most chill minister around”, there’s a high chance that you’re thinking of Minister for Education, Mr Ong Ye Kung, just like us. In a recent live-stream chat with him in The Quarantine, hosted by TheSmartLocal, the public was able to get to know our minister on a more personal level. 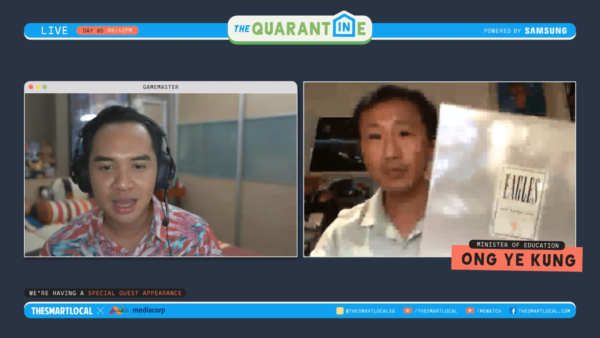 Aside from finding out his fanboy tendencies for Harrison Ford and Taylor Swift, something else caught our attention — his impressive collection of vinyl records.

Showing off his records of the famed Freddie Mercury, The Rolling Stones and Led Zeppelin, we can’t help but be impressed at their mint condition. 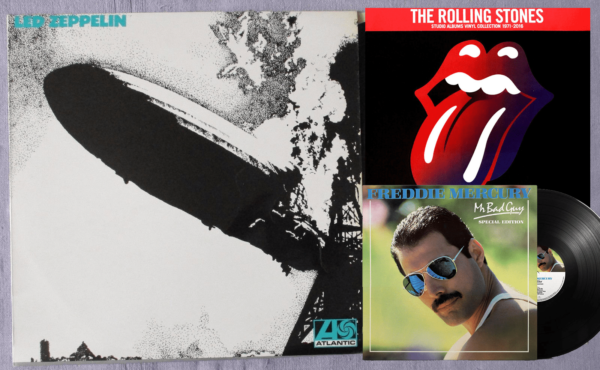 Vinyl collectors are aware of how much effort it takes to care and collect these records, so this attention to detail is a trait that comes in handy in his ministerial work as well.

On a side note, we must say that Mr Ong’s taste in music is also absolutely impeccable.

Keeping fit is always at the top of the list for many of us who set New Year’s resolutions. A strict fitness regime is also the first to dwindle into oblivion as the year progresses.

Our president, however, has ingrained the habit of keeping fit into her daily lifestyle. Everyday, Mdm Halimah Yacob reportedly wakes up at 5 o’clock in the morning to exercise for 45 minutes. 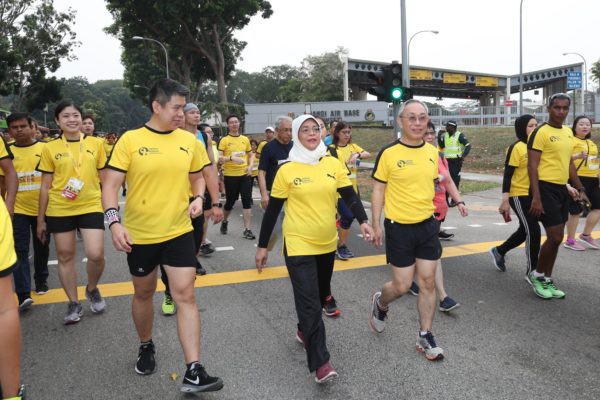 Sharing that her mother had inculcated this in her, Mdm Halimah also revealed her mother’s very own motto — “If you don’t wake up before the sun rises, then you’re lazy.” 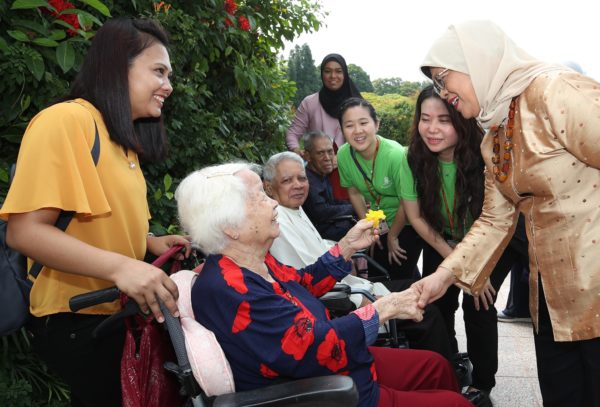 It inspires us to hear of Mdm Halimah’s dedication and commitment, which we see her channeling into the charitable work she helps with for our country as well.

You might know our Speaker of Parliament for his charisma and dad-jokes in speeches. However, comedic goals aren’t the only things he scores in.

A loyal Liverpool supporter for close to 5 decades, Mr Tan also uses his love for the sport for good. In 2017, he played against Singapore football icons like Fandi Ahmad and Aleksandar Duric for a charity event, raising $125,250. 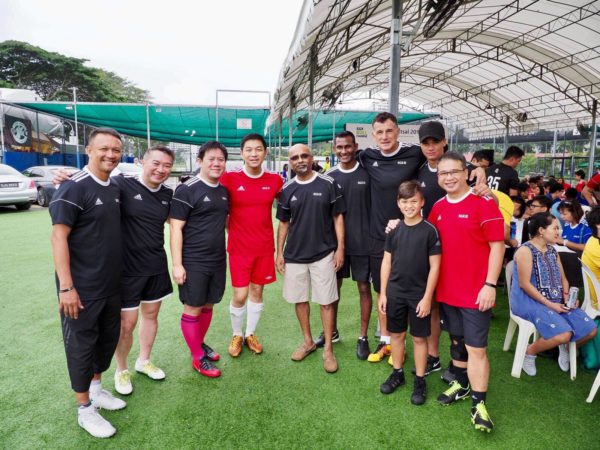 On top of this Mr Tan also plays regularly with his Chai Chee community and members of parliament such as MP Pritam Singh. 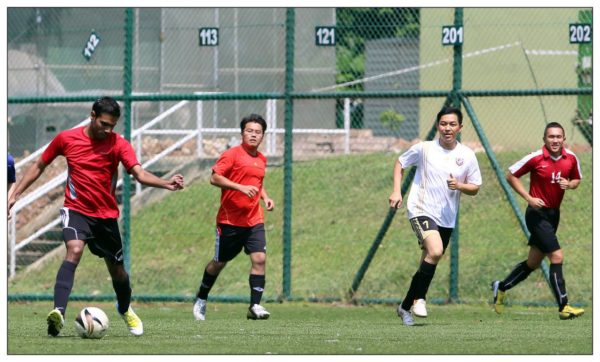 The best is truly yet to be with this all-rounded Anglo Chinese School alumnus, and we admire his friendship with members of other political parties. 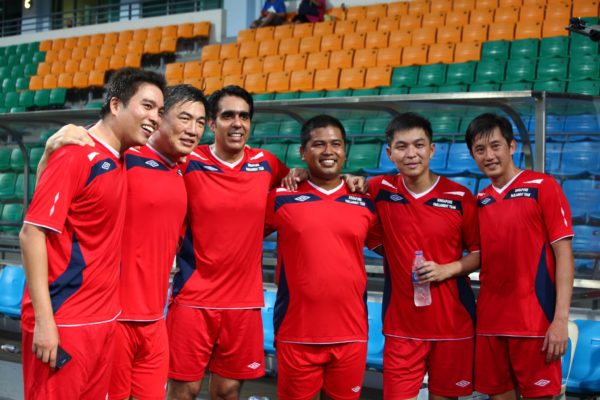 While this activity may not be something Minister Grace Fu partakes in often, she certainly was a natural at it.

As part of a series called “Doing Things With Ministers” by Millennials Of Singapore, host Johnathan Chua challenged Ms Fu to a friendly game of Kopi Pong. 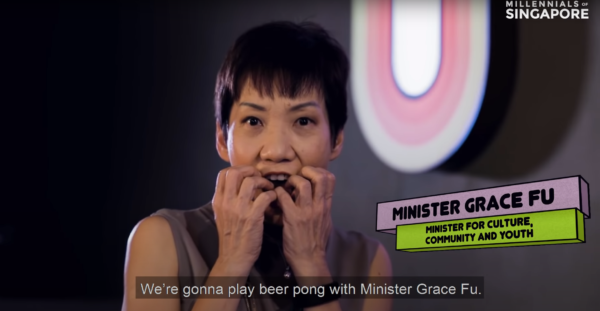 A twist to the cult classic beer pong, each player would have to down a shot of coffee if the other landed a shot in the opponent’s cup.

While her opponent was leading in the beginning, Ms Fu kept going at it and saw her opponent having to down more shots of coffee as the game progressed. 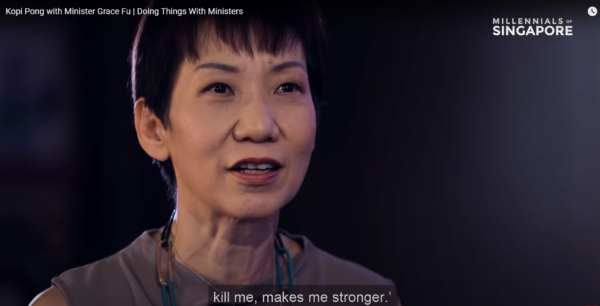 Even when addressing her own controversies during the conversation, Ms Fu still offered up heartfelt advice to the younger viewers watching. As a result of the playful banter between the two, more Singaporeans caught a glimpse of a different side to the minister.

Though he didn’t win the presidential elections of 2011, Mr Tan Kin Lian is arguably winning at life. 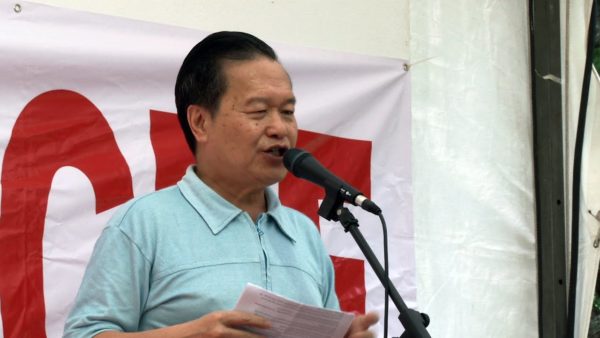 An ardent fan of the classic musical, Phantom of the Opera, the 72-year-old decided to produce his own tribute to Sir Andrew Lloyd Webber. 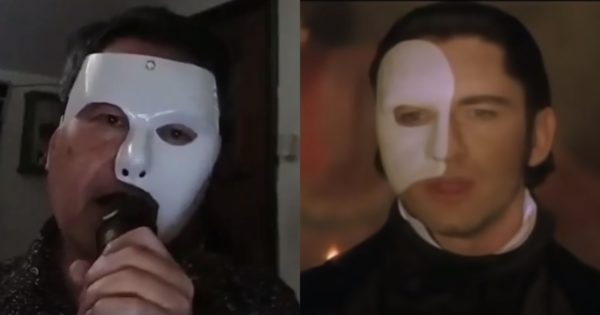 In a haunting rendition of “The Music of the Night” posted on his Facebook page, Mr Tan serenaded viewers from the comforts of his home with a nifty karaoke mic.

With the lights dimmed and a mask he claimed to have bought from a shop in Johor for RM2, Mr Tan woefully sang the entirety of the 5-minute long ballad.

Truly, the music of the night.

Yet another musically-inclined politician, leader of the Singapore Democratic Party (SDP) Mr Chee Soon Juan is also seemingly adept at the guitar.

In a video posted on SDP’s YouTube channel, Mr Chee is seen performing with his 2 daughters at an SDP anniversary dinner.

While his daughters take over the vocals for this performance, Mr Chee is all smiles playing alongside them.

In yet another video, we also marveled at his rendition of You’ve Got A Friend by James Taylor. Jokingly telling his audience to use their earplugs if they brought them, Mr Chee goes on to put up a heartwarming performance in his soothing baritone. 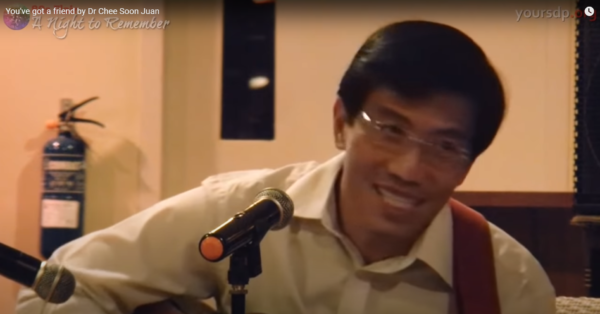 The whole audience begins singing along and it’s just a beautiful cover altogether. 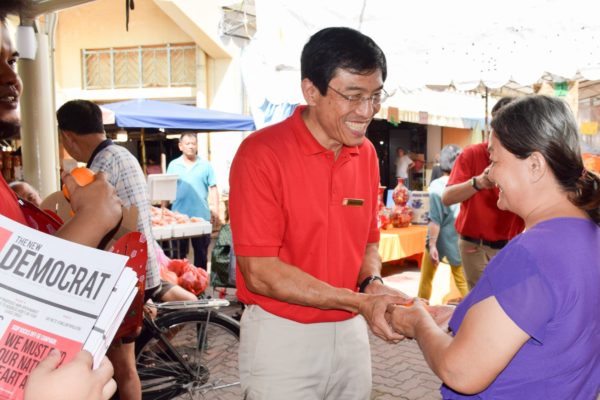 Whether it’s going for runs or some static exercises at home, he seems to do it all. During the stay-home periods amid the Covid-19 pandemic, he has also been encouraging his followers to maintain their fitness even at home. Mr Baey even has a Tik Tok account, where he shows us how to exercise EVEN while doing household chores. If that’s not a fitspo politician right there, we don’t know what is.

Politicians are people too

As mentioned, sometimes it’s easy to forget that our politicians are people just like us.

Seeing their hidden talents and hobbies is a great reminder of that, providing amusement and enjoyment while also inspiring us all.