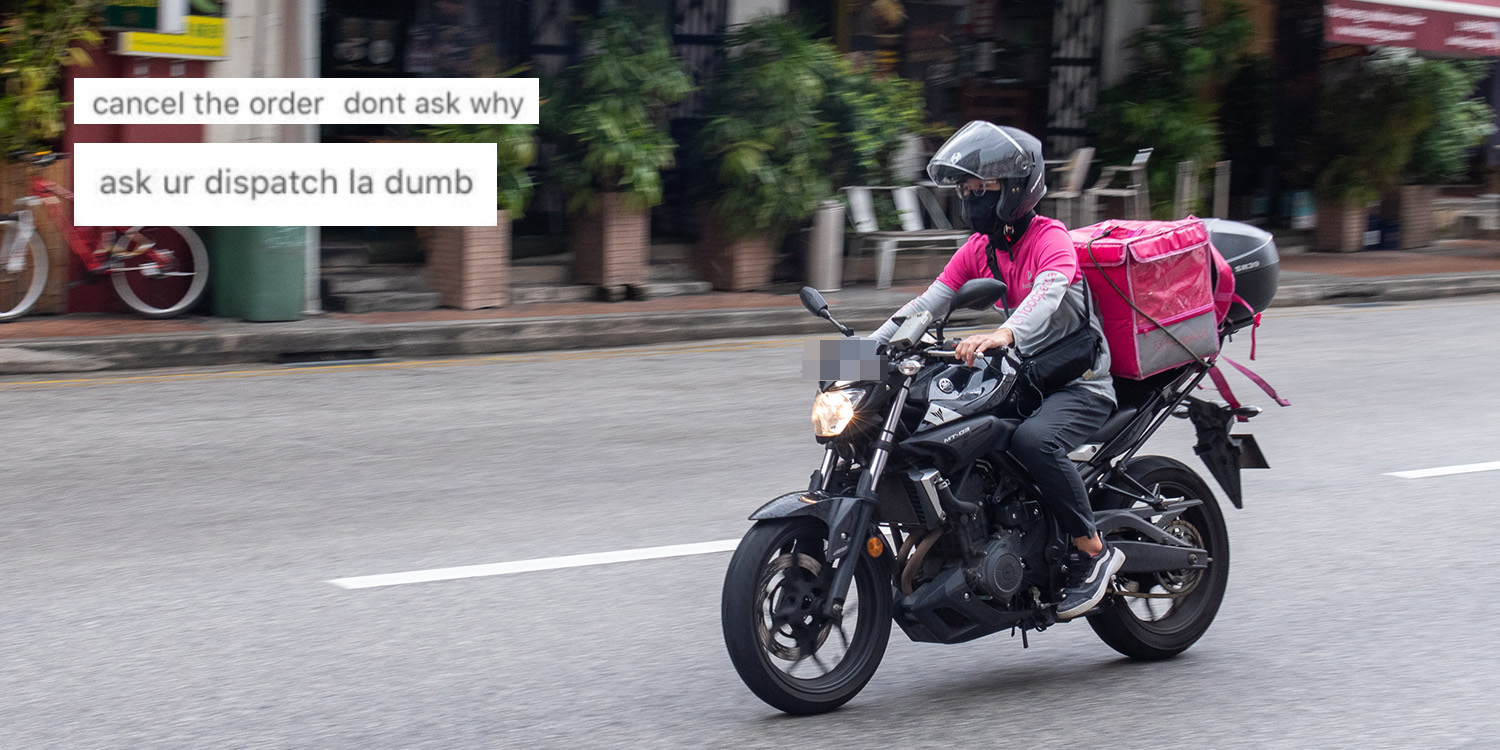 Be it rain or shine, we can always count on our dedicated riders to deliver food to our doorsteps. Thanks to them, we can relish freshly cooked food from F&B outlets without having to leave our homes.

Many are grateful for their dedication, and some do good deeds to encourage them in their jobs.

Sadly, one Foodpanda rider had the unfortunate luck of encountering a seemingly derisive customer on Saturday (20 Feb) afternoon. 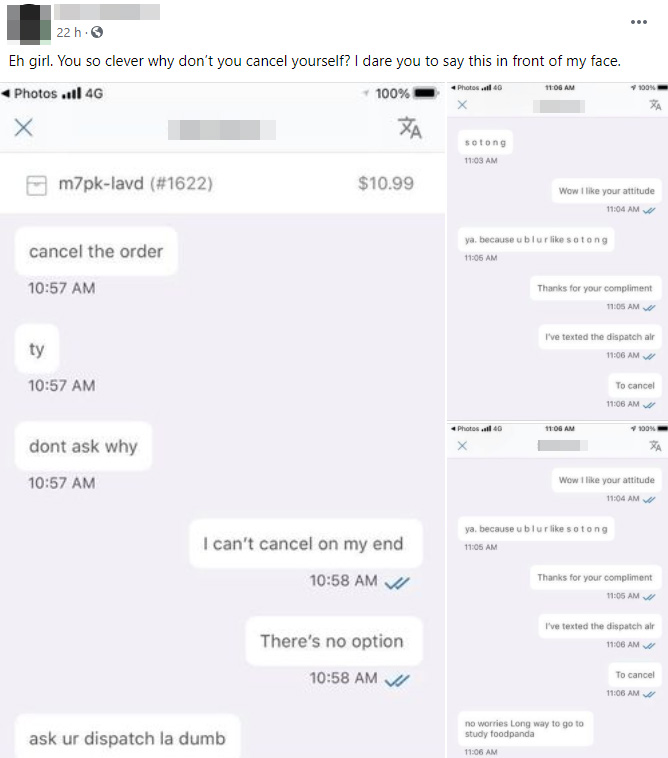 Despite being in a difficult situation, the rider did his best to respond professionally and thanked the customer for her ‘compliment’.

The post has since gone viral, garnering over 1,500 shares in less than 24 hours.

Speaking to MS News, the rider said he accepted the woman’s order from McDonald’s in Bugis Village via Foodpanda.

When he was making his way there from Bugis Junction, he received notification of the customer’s chat, suddenly telling him to cancel the order without specifying the reason. 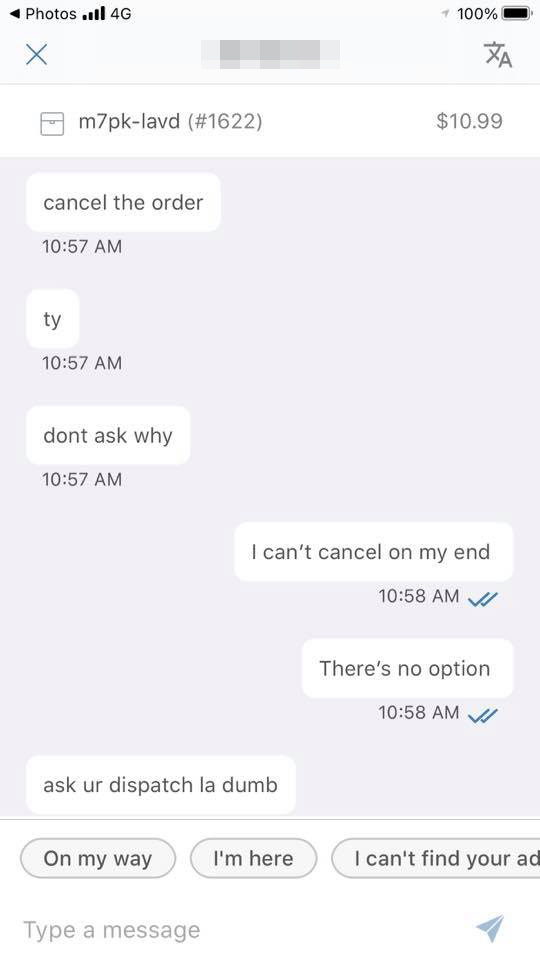 When the rider told her there was no option for him to cancel, the customer simply said, “Ask your dispatch la dumb”.

Rider didn’t have option to cancel, gets called “blur sotong”

The rider told MS News that his app did not give him the option to cancel, which he tried to explain to her in a professional manner.

Unfortunately, he claimed he received unreasonable replies and insults in return. 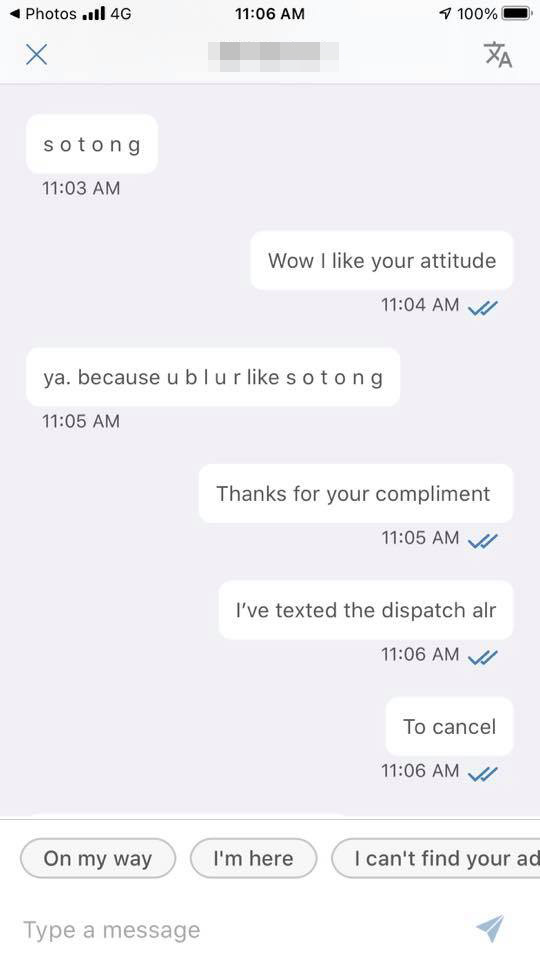 In one screenshot, the woman even went as far as to calling him a “blur sotong“, a common Singlish term that describes someone who is utterly clueless.

The rider maintained that customers are usually the ones who cancel their own orders, no matter the reason.

It’s not the rider’s job. I felt she was being unreasonable and inconsiderate.

He reached out to Foodpanda’s dispatcher regarding the incident, and thankfully, they could cancel the order. Though, it took roughly 30 minutes for the entire saga to be settled.

A dispatcher in Foodpanda functions as a customer service for riders. They’re in charge of communicating with riders in the event of difficulties faced during the delivery process.

Urges customers to be nice

Lamenting that the incident lost him precious time for potential orders as it was a Saturday afternoon, the rider said it affected his earnings for the day.

He urged customers to be nice, as “riders are humans too”, and they aren’t “punching bags to vent frustrations on”.

Yes, the riders are being paid. But it’s hard-earned money and not easy money after all.

There was an outpouring of support for the rider when the post went viral. Many were appalled by the woman’s behaviour and expressed empathy for the rider.

One netizen called her out for her discourtesy. He said she too was a “blur sotong” as she didn’t know how to cancel the order.

Another netizen echoed his sentiments, wondering why she ordered food if she didn’t want it in the end.

One netizen suspected that the customer could be an existing or former rider with Foodpanda, as she seemed to know the workings of the system.

Treat everyone with respect

Food delivery riders are part of Singapore’s frontline heroes, as they travel around the island tirelessly to pick up and send orders to earn an honest living.

We may not know the reason behind the woman’s inexplicable behaviour, like wanting to cancel her order and calling her rider unkind names, but let’s all be kind to each other.

Most delivery riders do their best to serve, and they deserve empathy and respect from customers in return.

Featured image adapted from Facebook and by MS News.