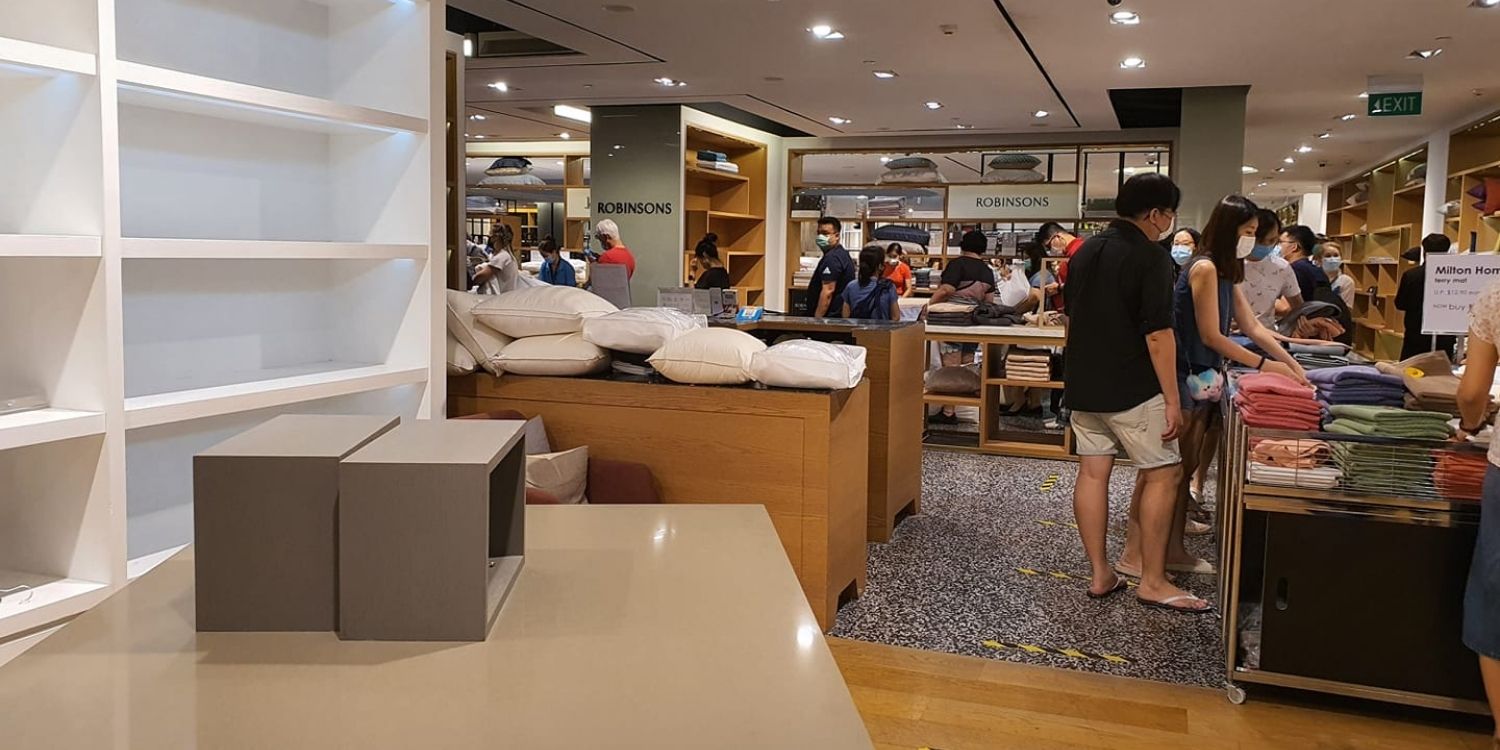 Singapore Business Alleges Robinsons Owes Them Around $6,000 Since August

After local retailer Robinsons announced that it’ll be closing down its remaining 2 stores here, crowds packed the stores over the weekend.

While there was evidently no sale, many Singaporeans were probably hoping to get the feeling of shopping there one last time. Others may be trying to use up their vouchers.

However, if you’re planning to grab what you can from the shelves there, consider that some may be on consignment — that means although they’re physically in the store, they actually belong to other businesses that are allowing their products to be sold there.

One small business owner has alleged that it hasn’t been paid by Robinsons since Aug. They also claimed that if customers are buying their products, the money won’t go to them.

The small business owner’s Instagram page is usually full of photos of its beautiful products, but since Saturday (31 Oct), it has posted a series of disgruntled messages on Instagram stories. 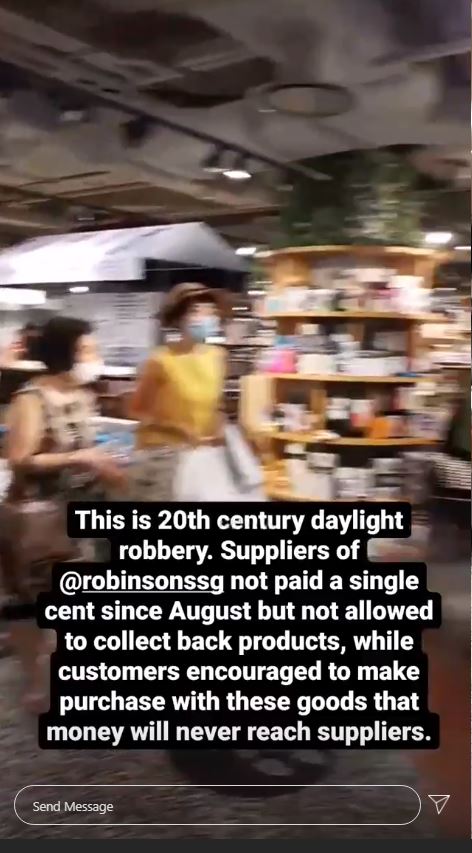 In posts that appear to be made by the proprietor, there are allegations that they haven’t been paid by Robinsons since Aug.

Meanwhile, when customers buy consigned goods like theirs, the money “will never reach” them, they claimed.

Goods are on consignment

The proprietor says Robinsons does not own consigned products — which by definition means that the store physically holding the goods is just selling them on behalf of the owner of the goods, i.e. the consignor.

If the store sells them, it typically sends the sale amount to the consignor and takes a commission.

If the goods aren’t sold, they should be returned to the consignor.

Mad rush to take goods back

According to the posts, suppliers like them, who are small businesses, are “in a mad rush” to take back their goods. She says they were “denied that right” on Friday (30 Oct), when Robinsons announced their closure.

A woman who identified herself as the sister of the proprietor also said her sister had to personally go down to Robinsons and take back her goods “by force” on Saturday (31 Oct).

Suppliers allegedly not allowed to take goods back at first

Both the proprietor and her sister claimed that Robinsons didn’t allow the taking back of their goods on Friday (30 Oct). We’re uncertain why that would be the case.

A subsequent Instagram stories post from the proprietor – in response to a question – claimed that the store initially didn’t allow owners of the goods to withdraw them.

But later, the store approved the request if businesses could prove their goods were on consignment. 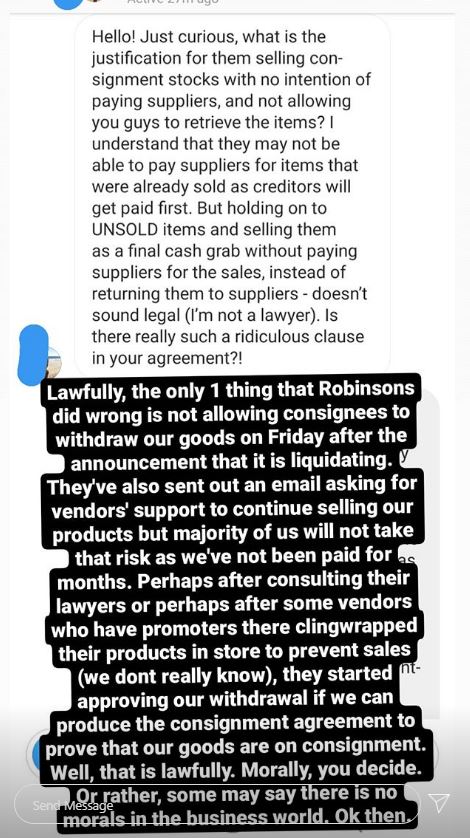 They updated later that on Friday (30 Oct), they weren’t allowed to take back their goods, and were asked to contact the liquidator. 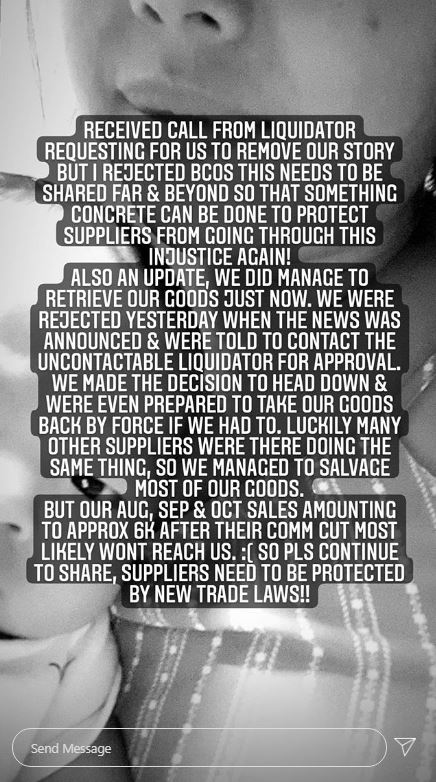 However, they managed to take back their goods on Saturday (31 Oct) together with other suppliers who were there for the same reason.

However, it’s “most likely” that they won’t be paid for those goods that were already bought by customers in Aug, Sep and Oct, the proprietor said.

Apparently, the proprietor’s father tried to tell shoppers that suppliers weren’t being paid, but nobody cared. 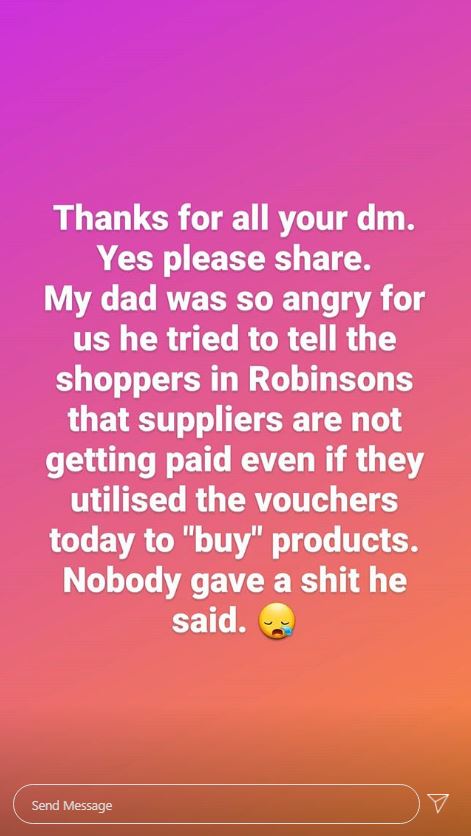 Elaborating on their plight, the business said they decided to speak up because it’s the 2nd time they were on the losing end after a big business decided to liquidate. 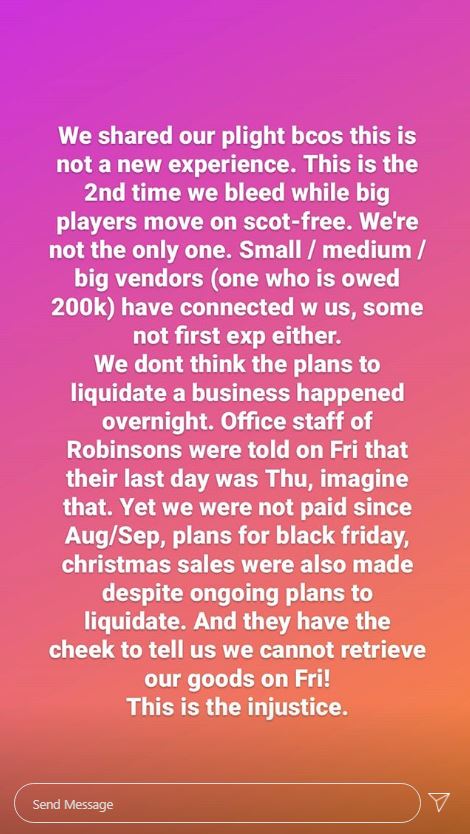 They said when honestbee shut down, they lost $3,000 as they didn’t get paid for sales of their goods.

During these dire economic times, such a sum is important for small businesses like theirs to stay afloat, they added, asking Minister for Trade and Industry Chan Chun Sing for help. The proprietor’s sister also chipped in, saying her sister and brother-in-law’s hard work goes down the drain when big retailers like Robinsons close down.

To compound their woes, the business also revealed that the proprietor just gave birth, and was on maternity leave in Aug.

That means she lost income during that period, being self-employed.

However, her husband still worked hard to supply goods to Robinsons, giving up time with their baby in the process.

However, all that work came to nothing when Robinsons announced their liquidation, shocking them.

Now, they alleged that their hard work to generate sales for their company will go towards funding Robinsons’ creditors.

Under the caption “work in progress”, visitors were advised to head to their 2 stores or email them for any returns.

It must be frustrating when your hard work is all for nothing, and the small business’ plight is a reminder that when big companies shut down, many small companies may also be affected.

As we mourn the demise of a Singaporean institution like Robinsons, perhaps we should also remember the small local businesses whose survival will be made more difficult.

MS News has reached out to Robinsons for a response to the allegations, and will update the story when they get back.