Gone are the days of catching and water bottle football at recess. It appears that today’s primary school students are playing games that are more dangerous than fun.

But wait, don’t call us fake news just yet. The above is true only if you blindly believe rumours circulating through parents’ chat groups. A recent incident at Rosyth School highlights the dangers of idle gossip and loose talk in these groups, which are popular among today’s tech-savvy parents.

According to the school, rumours were circulating in these groups about an “unsafe game” that its Primary 1 and 2 pupils were playing. Rosyth is currently preparing a response to it, but did not share more details.

The latest rumours are especially worrying given unverified rumours about a so-called “suicide game” that pupils had been playing on a school bus.

That game featured a rather sophisticated system:

The objective was to gain as many points as possible. It was played by pupils of school bus 19 earlier this month.

But things got out of hand when 1 pupil asked to be excused from the game. In a bid to persuade him to stay, the other students told him that he had to ‘die’ in order to exit.

Though most pupils understood it to mean ‘the end of the game’, the Primary 1 boy did not comprehend it the same way. He went on to tell his parents about the incident, who informed Rosyth staff.

While condemning the game, principal Madam Elis Tan took greater issue with parents who spread unverified rumours about it, causing “discomfort” among Rosyth’s students and their parents. In a sharply-worded letter to parents dated 24 July, she wrote,

(We) would like to appeal to parents to stop circulating unverified accounts of the case. 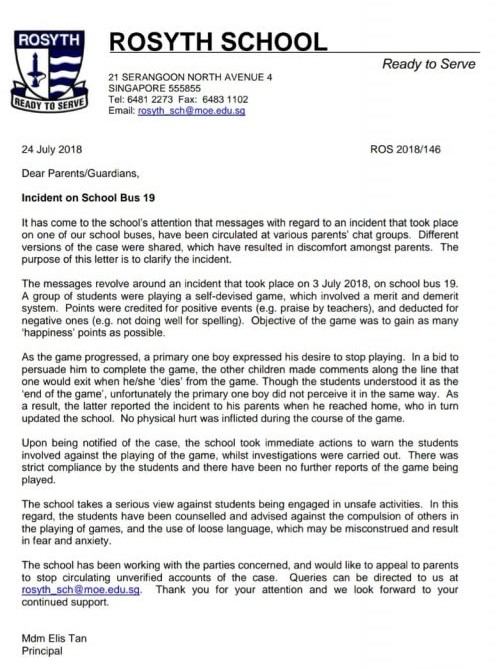 Netizens didn’t comment on Mdm Tan’s actions as much as they did on the game itself. Some found it a grave matter and that the school was right to step in to discourage the game.

Others felt that the word ‘die’ was no big deal in games, as Gen Y kids grew up perfectly fine even though they said it a lot. 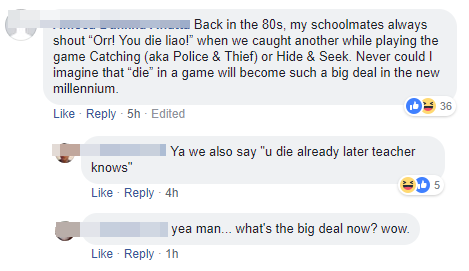 What’s your take on this? Let us know in the comments section below.

Featured image from Sure Boh Singapore and Singapore Property Launch.