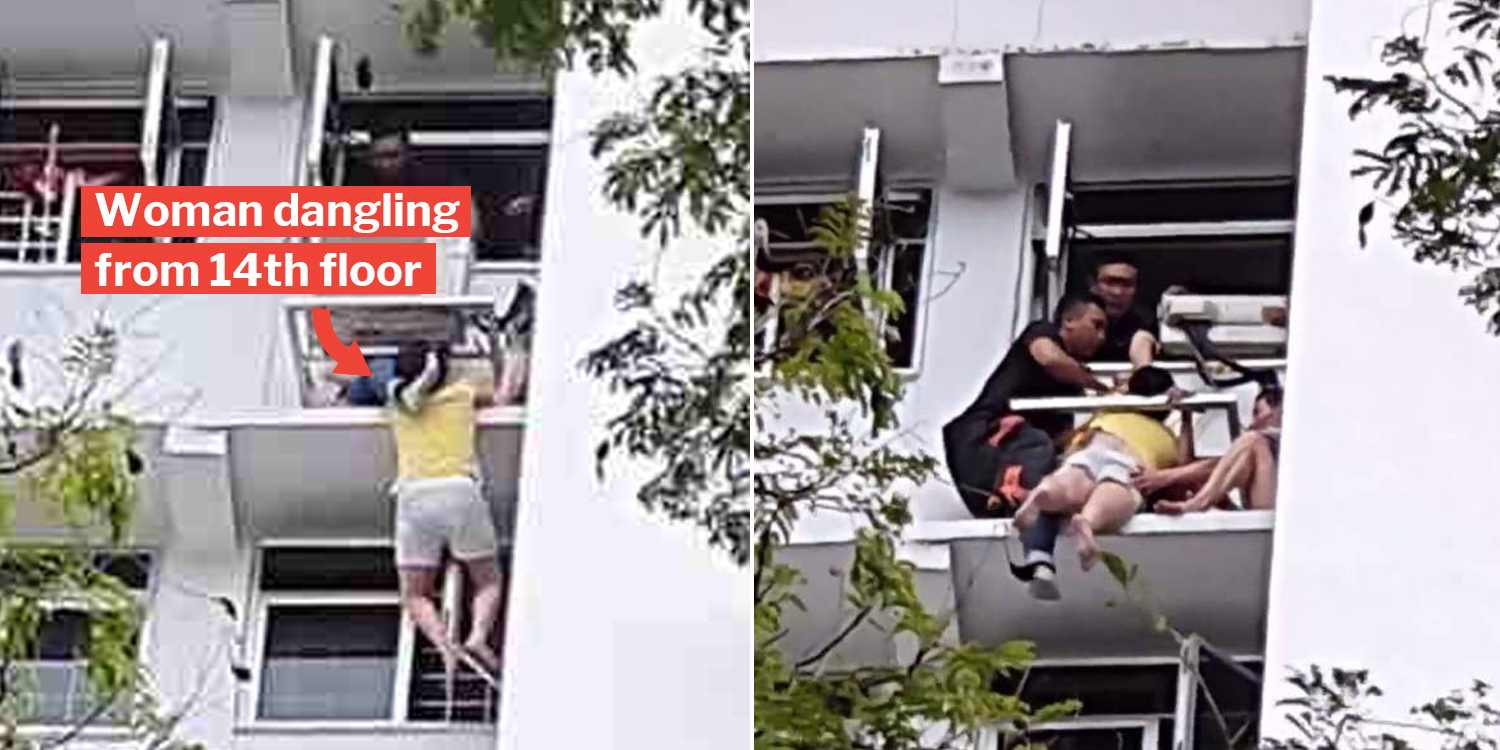 Update (16 Jan, 4.35pm): A 62-year-old lady relating to this incident has been arrested under the Mental Health (Care and Treatment) Act, reports Lianhe Zaobao.

Every one of us must be familiar with how physically draining it is to keep ourselves dangling from monkey bars. 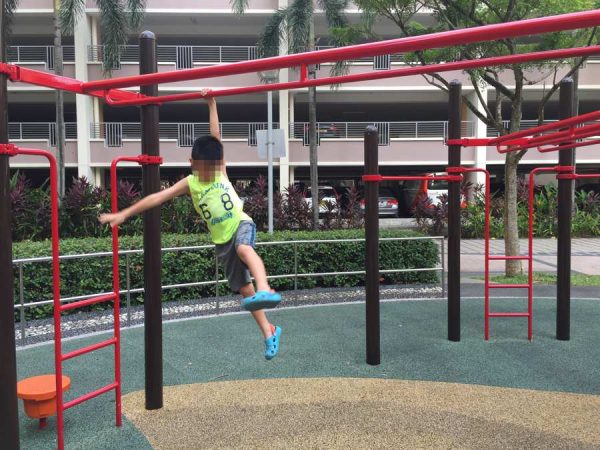 Now imagine yourself suspending from a bar, this time, 7 floors off the ground. Pretty terrifying? We think so too.

Yet that was the exact predicament that a woman found herself in, as she dangled precariously from the 7th floor of a HDB block in Lavender. 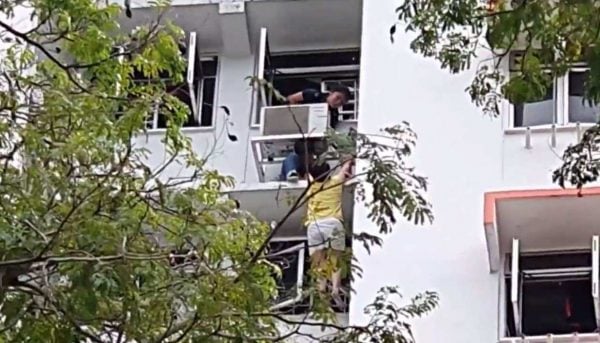 Fortunately, SCDF officers arrived at the scene and managed to pull her to safety.

On Wednesday (15 Jan), Reddit user u/obiwangucamole uploaded footage of the nail-biting rescue mission. You can watch it in full here.

Woman dangles from 7th floor, held on by 2 other men

Based on the footage, the incident happened at block 7 along King George’s Avenue, located right across the People’s Association Headquarters. 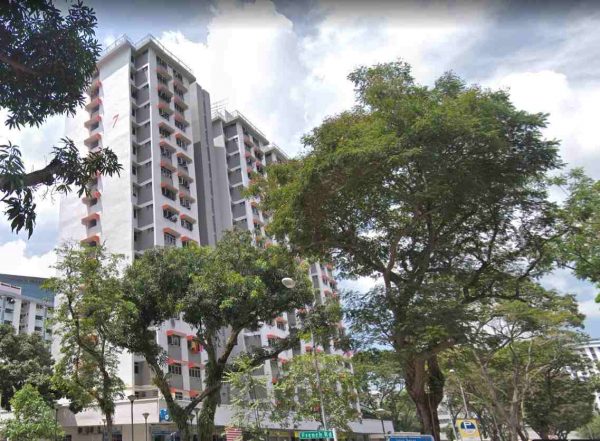 At the start of the video, the Redditor gives a tour of his surroundings before zooming into the HDB in front of him.

Dangling off the 7th floor was a woman dressed in yellow, held up by 2 other men who had to twist and turn to fit on a narrow ledge, which also houses an air-con compressor. The men who held on to the dangling woman presumably had difficulties pulling her up, given the cramped space on the ledge. 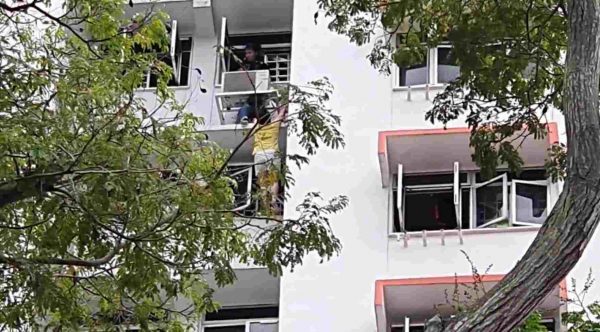 According to Lianhe Zaobao, the woman’s boyfriend was one of the people on the ledge trying to rescue the dangling lady. He even resorted to using his calves to hold on to his girlfriend.

SCDF officers can also be seen examining the situation from the window.

At roughly the 21-second mark of the video, an SCDF officer carefully climbs out of the window onto the ledge. 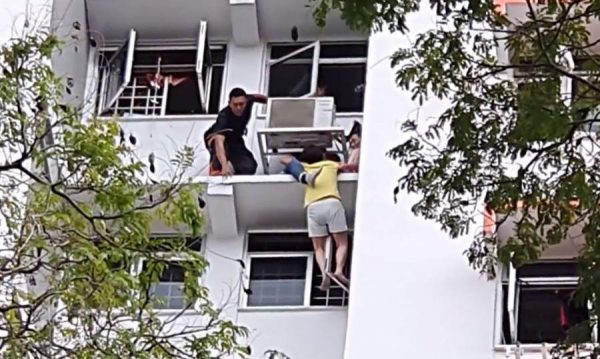 The video then gets interrupted for a moment. As it resumes, the air-con compressor has already been removed from its frame. 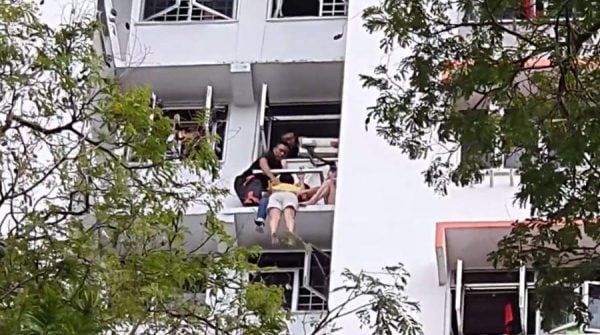 Then with one forceful tug, the SCDF officer pulls the dangling woman up the ledge and received rousing applause from onlookers who had gathered around the block. Some even called the brave SCDF officer a “hero”, and deservingly so. 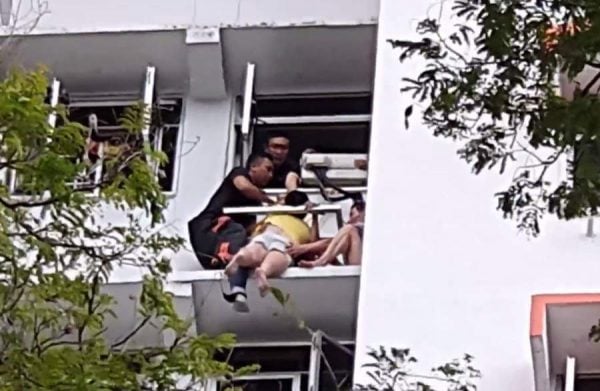 Kudos to the brave SCDF officers

Kudos to the SCDF officers for their bravery which saved the woman from almost-certain death.

While we have no idea how the woman ended up on the ledge in the first place, this tiny glimpse into the job of an SCDF officer shows us that they deserve more appreciation than they currently receive.