‘Sleeping’ Uncle Allegedly Leaned Too Close To Lady In MRT, Man Asks Him To Move Away

He asks people to stand up for others too.

When we get caught in unexpectedly distressing situations, such as being sexually assaulted, some of us may freeze up and not know how to react.

For one woman who was allegedly being touched by an uncle in the MRT, she apparently struggled to speak up even though she was visibly uncomfortable. 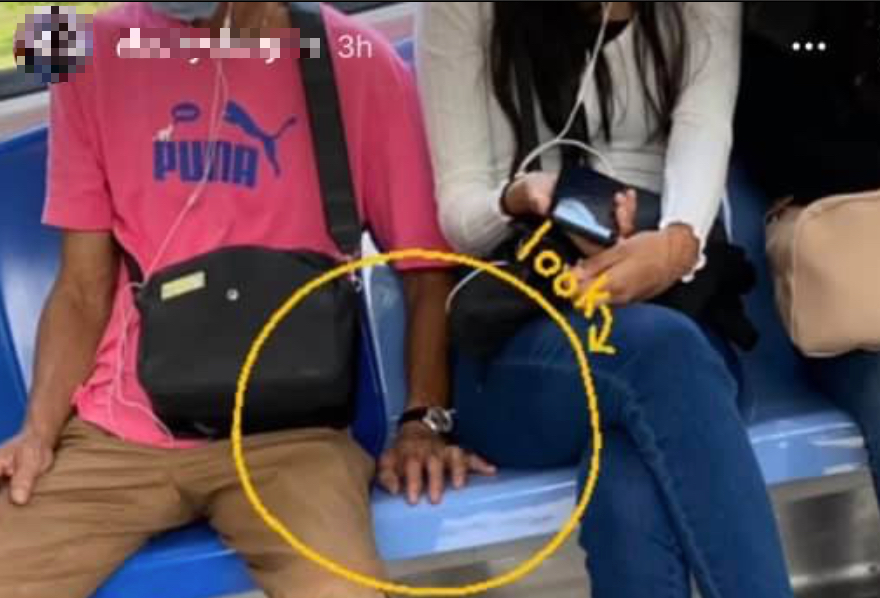 That’s when a commuter told the man to move his body and hand away from the woman.

He further urged women and commuters to stand up against such injustices if they encounter it.

Uncle allegedly pretended to be sleeping & inched closer to lady

On Mon (16 Nov), a sister shared she was proud of her brother for calling out a ‘sleeping’ uncle in the MRT.

The brother said he saw an uncle pretending to be asleep on the train. However, the man allegedly kept inching over to the woman on his left until his left hand and arm were touching her thigh and arm. 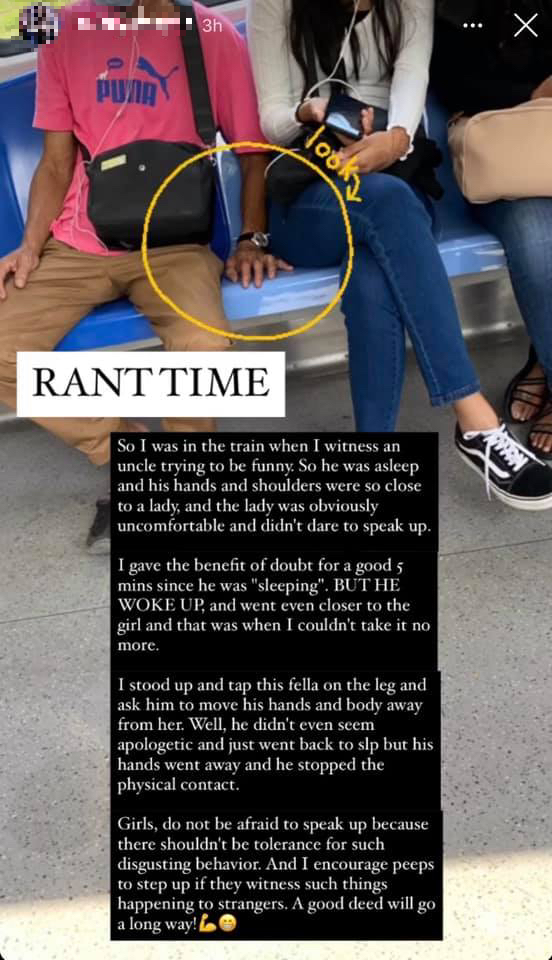 By the body language of the woman, it could be seen that she was uncomfortable as she crossed her right leg over her left and leaned her body towards the other side.

That’s when the brother confronted the uncle over his action.

He approached him, tapped him on the leg, and told him to move his hand and body away from the woman.

He alleged that the uncle was not apologetic but stopped the physical contact from then on.

Urges victims & passers-by to speak up

The brother then encouraged people not to be afraid when it comes to speaking up for themselves, and against injustices.

He implored women especially, not to be fearful of standing up if they experience outrages of modesty or sexual assault.

There shouldn’t be tolerance for such disgusting behaviour.

He added that it’s not solely the responsibility of the victim but the people around who witness such indecent acts as well.

Step up – a good deed goes a long way.

His sister echoed his sentiments. She said one form of righteousness is standing up and speaking out for what’s right.

Believing that evil can only prevail when righteous individuals do not use their voice and remain silent, she said,

We must be a voice of truth and righteousness in wisdom and gentleness.

Use our voices for the greater good

In today’s society where people are often told to mind their own business, this culture of looking the other way will only let unscrupulous characters get away scot-free.

It’s good to see a young man like the OP’s brother finding the courage to defend another.  While we acknowledge it’s not easy to be brave, one small step like this could go a long way into preventing crime.

People shouldn’t have to suffer alone. Let’s do what we can and look out for each other in this place we call home.