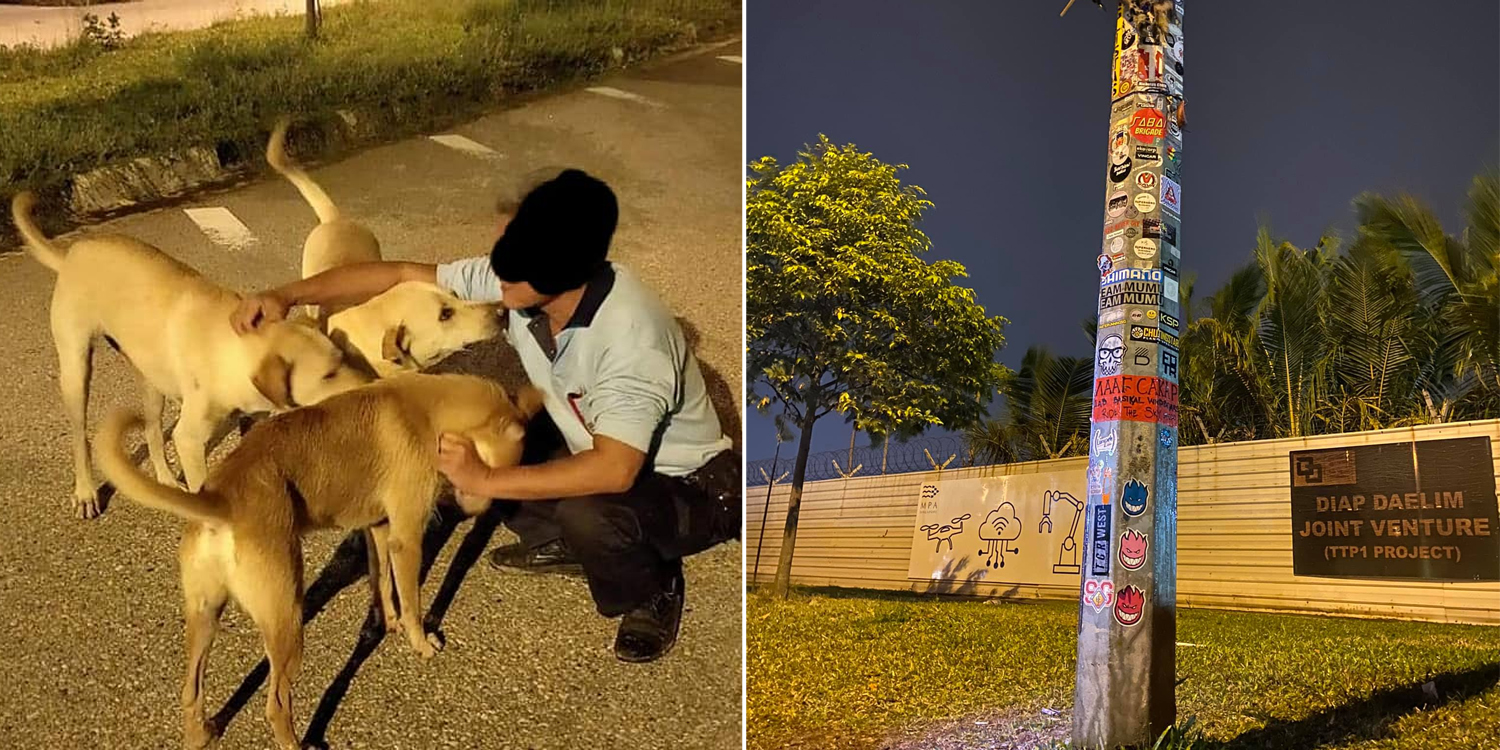 UPDATE (9 Jan): In response to MS News, an AVS spokesperson said that they had taken in the 3 stray dogs after receiving feedback over a biting incident.

The 3 canines are currently undergoing rehabilitation.

Moving forward, AVS said more visible signs will be installed around the area reminding cyclists to be “mindful” of the stray dogs living there.

Though many Singaporeans celebrated the preservation of the iconic landmark, not everyone might be aware that the ulu area is also home to stray animals.

On Wednesday (7 Jan) afternoon, animal group Causes for Animals – Singapore shared on Facebook how the vicinity was home to 3 stray dogs that were recently impounded due to complaints. 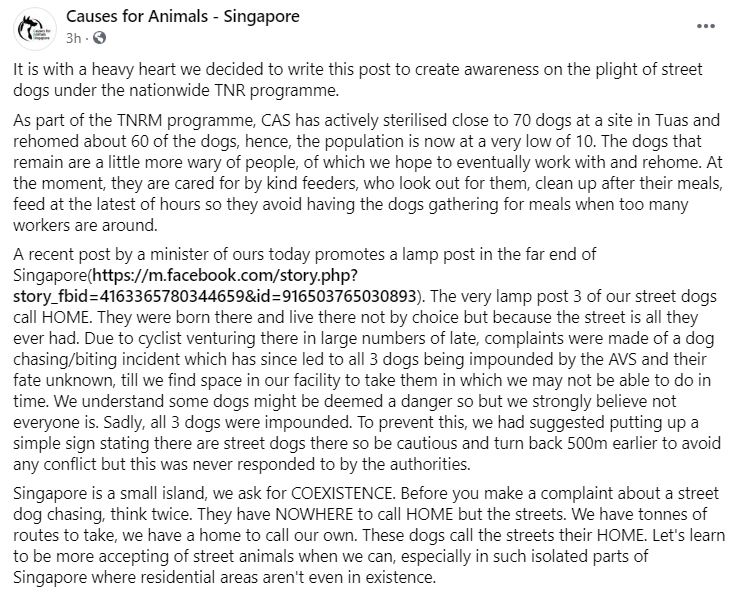 They took the opportunity to urge Singaporeans to think twice before lodging complaints against strays, as they have nowhere else to call home.

According to the post, the 3 dogs in question were born around the area of the lamp post and had lived there ever since.

However, as more cyclists venture to the area in search of the landmark, there has also been an increase in complaints lodged over the canines apparently biting and chasing people. As a result of the complaints, the 3 dogs have allegedly been impounded by the Animal & Veterinary Service (AVS).

Folks from the animal group are worried about the fate of the dogs as they might not be able to find space in their shelter in time to take them in.

To prevent similar situations from happening, the animal group said they had proposed for signs to be put up warning riders of the stray dogs.

However, the animal group claims the signs had not been erected.

Dogs around the area are cautious of humans

Folks from Causes for Animals – Singapore said they had carried out tremendous work to help lower the number of stray dogs in Tuas.

According to them, they had “sterilised” 70 dogs and rehomed another 60 at a Tuas site as part of the Trap-Neuter-Release-Manage (TNRM) program by AVS.

Currently, the dog population around the area stands at just 10.

The dogs are reportedly cautious of humans and are cared for by feeders who would feed and clean up after them.

Animal group urges Singaporeans to be more tolerant of strays

Ending the post, the animal group urges Singaporeans to be more tolerant of stray dogs especially in ulu corners of the island that are away from residential areas. 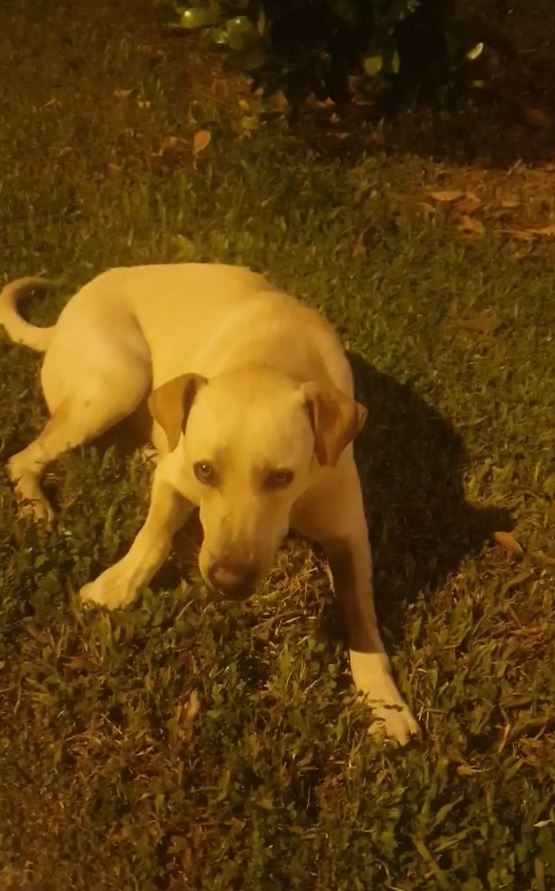 In particular, they plead with members of the public to “think twice” before lodging a complaint,

We have tonnes of routes to take, we have a home to call our own. These dogs call the streets their home.

In response to MS News queries, an AVS spokesperson said the dogs that have been taken in are undergoing rehab.

More visible signs will also be put up around the area to remind cyclists about the strays there.

The Animal & Veterinary Service (AVS), a cluster under the National Parks Board (NParks), had taken in three dogs from the Tuas site on 31 December 2020, in response to feedback about a biting incident involving a cyclist who was cycling at the area. The three dogs are undergoing rehab. We will work with Causes for Animals Singapore (CAS), our Trap-Neuter-Release-Manage (TNRM) programme partner for the Tuas area, on the progress of the dogs.

AVS is aware that there has been an increase in chasing and biting incidents due to an increase in number of cyclists frequenting that site. We will put up more visible signs around the site to inform cyclists to be mindful of the stray dog population, and will also work with CAS to explore other ways to improve the situation on the ground.

Under our TNRM programme, a key component of caring for our community animals is managing their populations humanely. Managing stray animal populations enhances their well-being, and helps to alleviate the community’s concerns about community animals in their living environment. This is why we have worked with CAS to actively sterilise and rehome about 60 dogs in the Tuas area, reducing the population size by more than 85%. AVS aims to sterilise more than 70% of the stray population nationwide.

To further support AVS’ TNRM efforts in rehoming stray animals, we also started a rehabilitation programme in November 2019. Under this programme, we try to familiarise and introduce the stray dogs towards living with people, allowing them to integrate better into a home for possible rehoming.

Community animals such as stray dogs and cats are a part of our urban ecosystem. With our continued outreach and education efforts, the public can play a more active role in creating a highly liveable environment with harmonious human-animal interactions. This is in line with the vision to transform Singapore into a City in Nature, for which community stewardship is a key thrust.

Let’s strive to live harmoniously with these strays

Though the preservation of the Tuas lamp post stickers is a move that’s rightfully praiseworthy, it also shone light on stray dogs living around the area.

Hopefully, cyclists, as well as other members of the public, would exercise greater tolerance when encountering them in the area.

After all, the streets are where these strays call home. Let’s all learn to live and let live so we can all coexist harmoniously together.