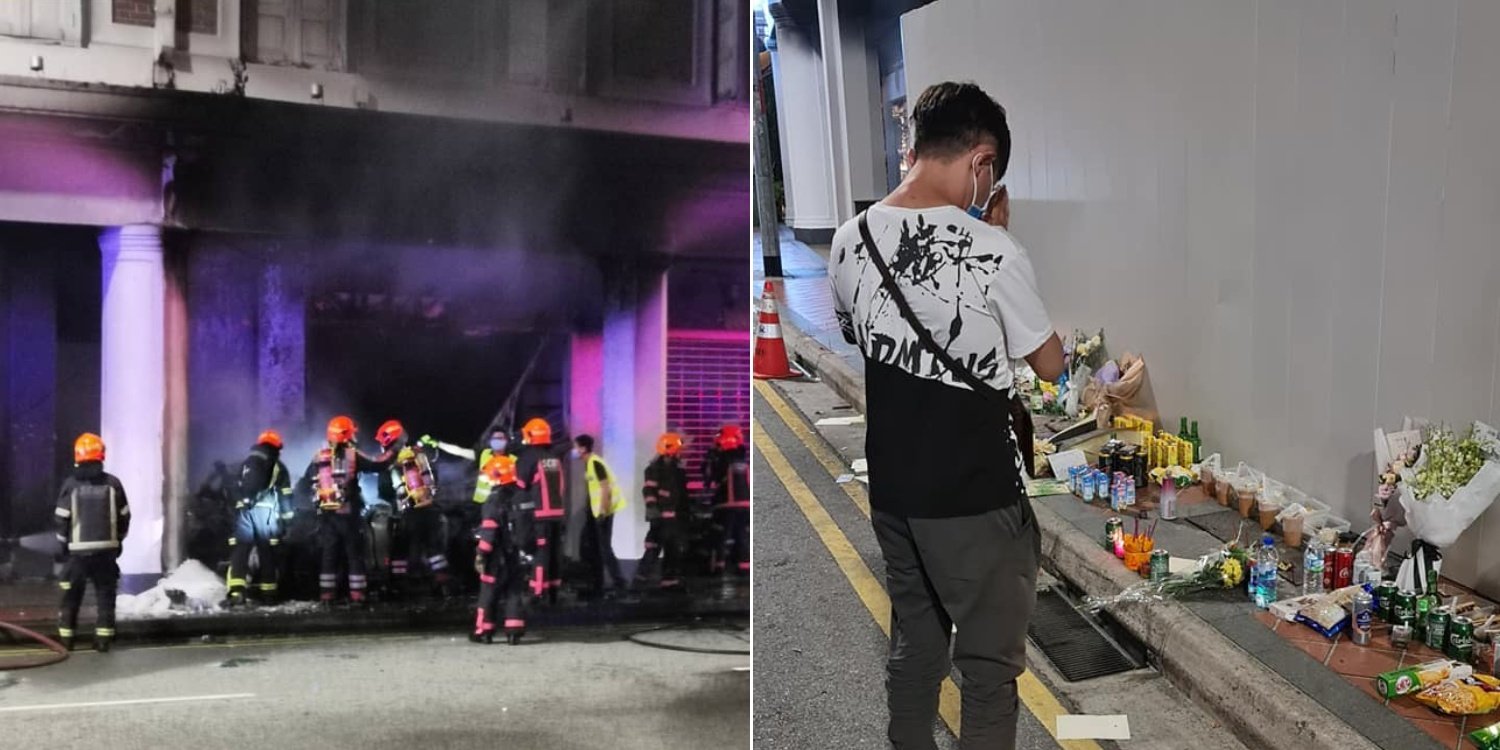 We have to be considerate of the families too.

The recent accident in Tanjong Pagar which claimed the lives of 5 people shook Singapore to the core. Social media posts have encouraged people to formulate their own opinions about what happened.

Though shock and sadness were common, some may have made remarks that left a sour taste in people’s mouths.

With the victims’ families in minds, the editorial team behind Facebook page Death Kopitiam 死亡咖啡店 has come forward in an attempt to soothe the situation.

Hoping to appeal to the public’s kindness, they’ve crafted a post reflecting on the tragedy and its aftermath.

No one deserves to die

On Sunday (14 Feb), Facebook page Death Kopitiam 死亡咖啡店 uploaded a lengthy reflection about the Tanjong Pagar accident that occurred the day before. 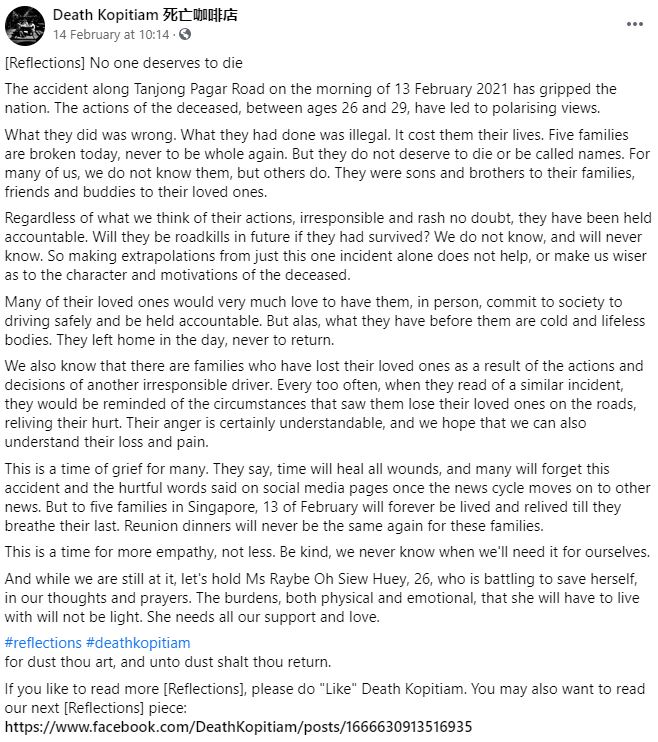 Acknowledging the sentiment that the likely speeding leading up to the accident “was wrong”, Death Kopitiam noted that the driver’s actions had already cost his and his passengers’ lives.

But in light of the tragedy, they also pointed out that the victims’ loved ones are now “broken” after losing their sons, brothers and friends.

Keeping this in mind, they asserted that,

(T)hey do not deserve to die or be called names. For many of us, we do not know them, but others do.

As police investigations are ongoing, some have taken it upon themselves to try to analyse the situation, and come up with possible deductions.

While these have led to further discussion, Death Kopitiam implies that they may not be helpful to the situation:

So making extrapolations from just this one incident alone does not help, or make us wiser as to the character and motivations of the deceased.

At the end of the day, the victims had already been held accountable for what they did, regardless of what everyone thinks.

The page also recognised that their families would have probably wanted them to make up for their actions under very different circumstances.

Now is the time for empathy & kindness

Since road accidents may involve innocent victims, Death Kopitiam also gave consideration to families “who have lost their loved ones as a result of the actions and decisions of another irresponsible driver.”

Reading about such accidents may force them to relive the pain of their loss, which justifies their anger. But the page only hopes for the rest of us to “understand their loss and pain”.

Rather than be angry, they note that this is the time for grief. Many of us may forget the comments we’ve left or read, but the victims’ families will feel the hurt for a long time after. 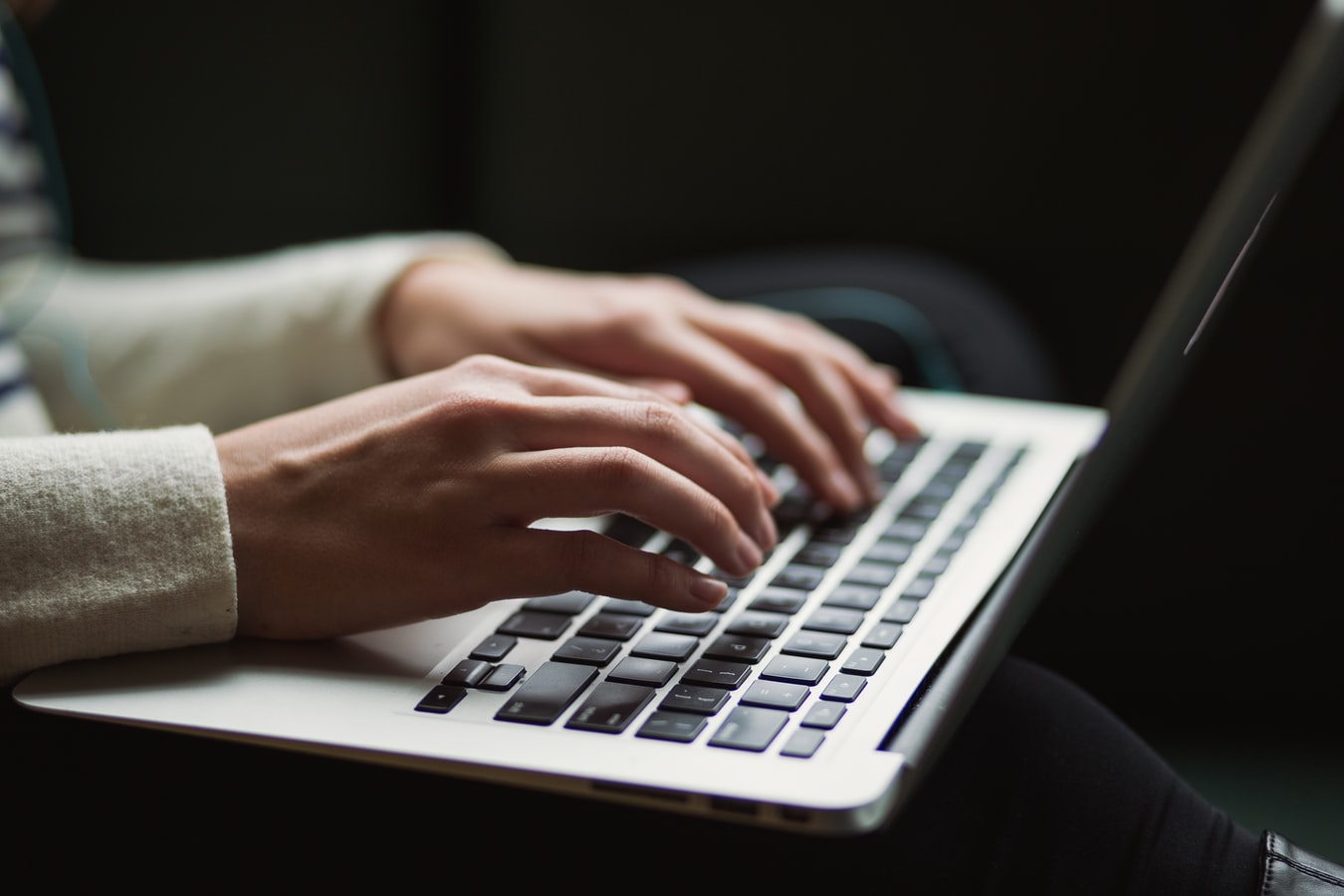 More seriously, the day they lost their loved ones will forever be etched in their minds, especially since it coincided with an important occasion. CNY reunion dinners will never be the same again, as they mourn their losses.

Have some consideration for the victims’ families

Whatever thoughts we may have about a tragedy, we must always remember that they may concern innocent individuals who’ve lost people they care about.

Therefore, we should be mindful of the comments we make and know where to draw the line.

Let’s give their families time and space to grieve, without having to deal with scathing remarks.

Fate has already been cruel by taking away their loved ones, so let’s not add to their pain.