S’porean Buys Tapioca Pearls For BBT, Must Make 20kg Of Boba ASAP Before They Expire

The product listing has since been taken down.

Singaporean Buys BBT Tapioca Pearls With 6-Month Shelf Life, Finds Out They Expire In May

Update (1 May): Acorn Singapore has provided us with an update, stating that the incident has been “resolved amicably”.

The company has also replaced products Ms Rachel bought previously with another batch with a longer expiry date.

As bubble tea establishments shut their physical stores following the tightened ‘Circuit Breaker’ measures, many Singaporeans have turned to DIY kits in a bid to brew their own ‘elixirs’.

While some found joy in recreating their favourite beverages, one Singaporean did not.

After buying nearly 20kg of raw tapioca pearl, Ms Rachel was devastated to find that they expire just 3 weeks later — a huge contrast to the 6 months allegedly stated on their website.

Yet when she approached the seller to enquire about the short period of consumption, the company allegedly refused to offer a refund.

She took to Facebook on Wednesday (29 Apr) to vent her frustrations. You can read it in full here. 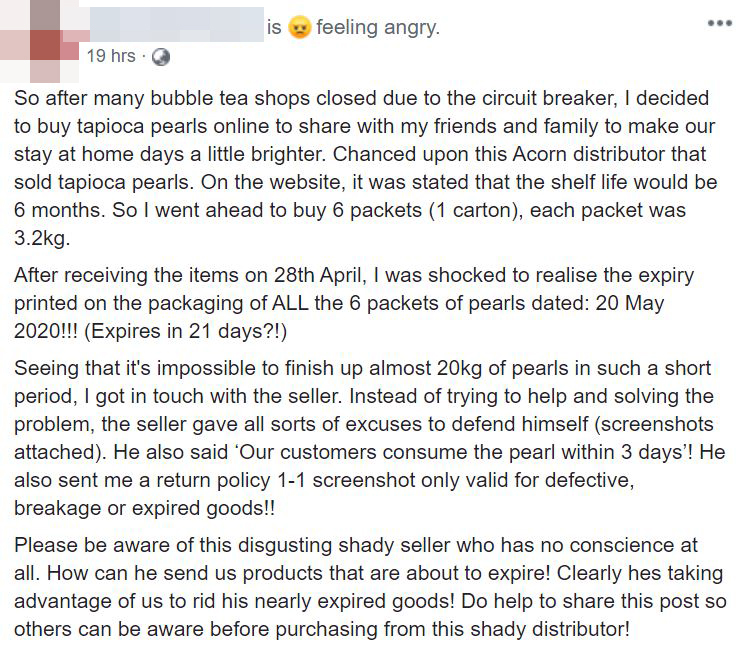 Like most of us, Ms Rachel apparently got her hands on the DIY BBT pearls in the wake of the tightened ‘Circuit Breaker’ measures to make her family and friends’ days at home “a little brighter”.

Since it was stated on Acorn’s website that the storage and shelf life is 6 months, Ms Rachel apparently purchased 19.2kg of pearls. 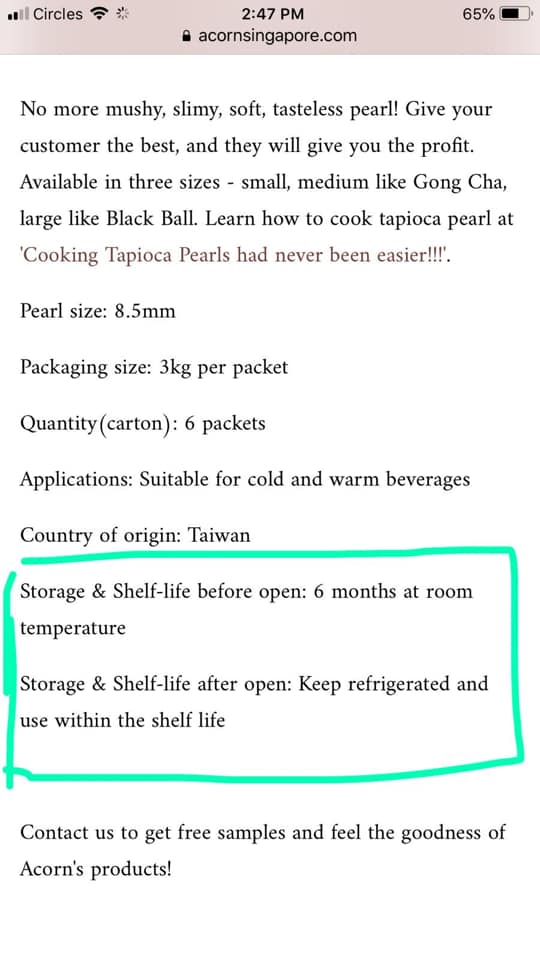 DIY pearls expire in 1 month instead of 6

However, as she received the pearls on Tuesday (28 Apr), Ms Rachel found that the expiry date for all 6 packets was 20 May — just 1 month away from the date of purchase. 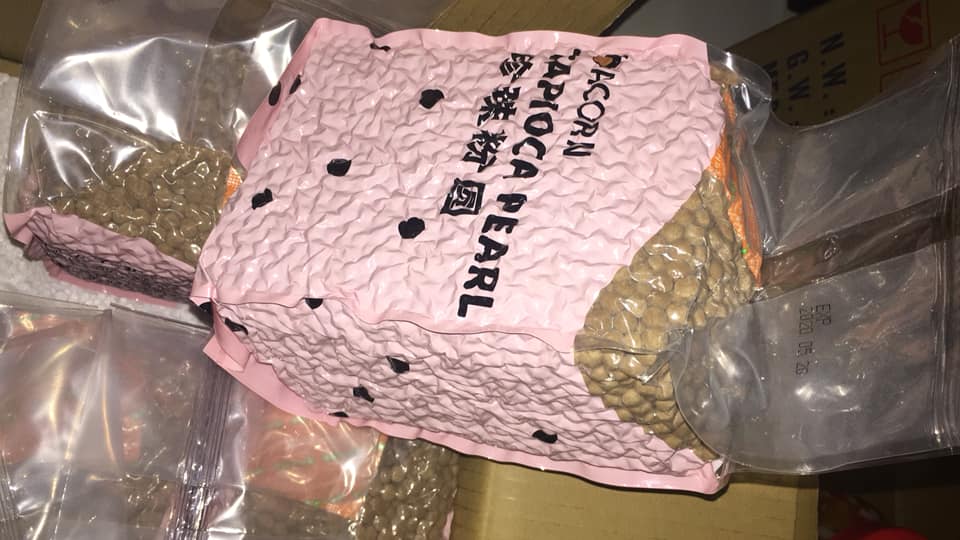 Since she found it “impossible” to finish the pearls within the period, Ms Rachel approached the seller via WhatsApp.

Throughout the conversation, the company representative maintained that they do not sell “expired or defected item”, but did not address the disparity in shelf life. 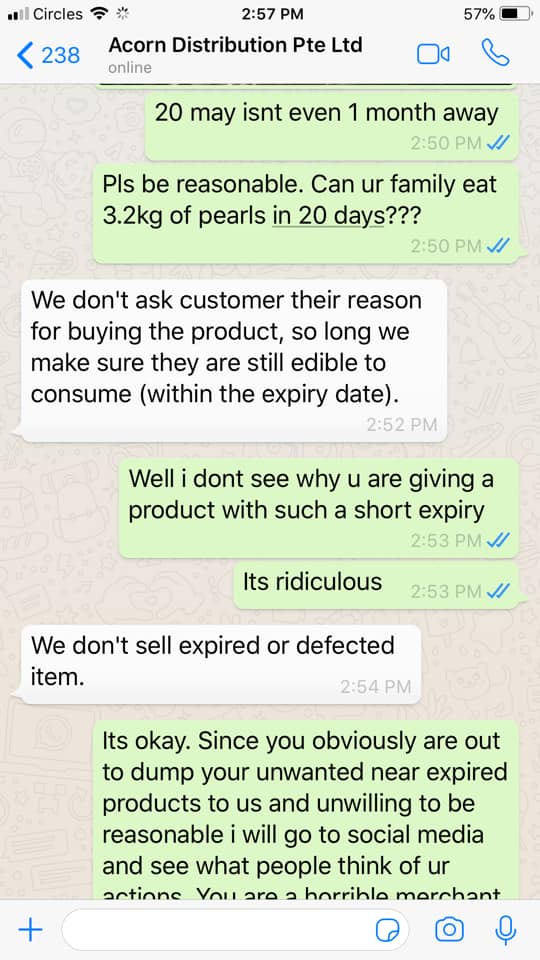 At one point, the seller even told Ms Rachel that other customers managed to finish the pearls – presumably each packet – within just 3 days. 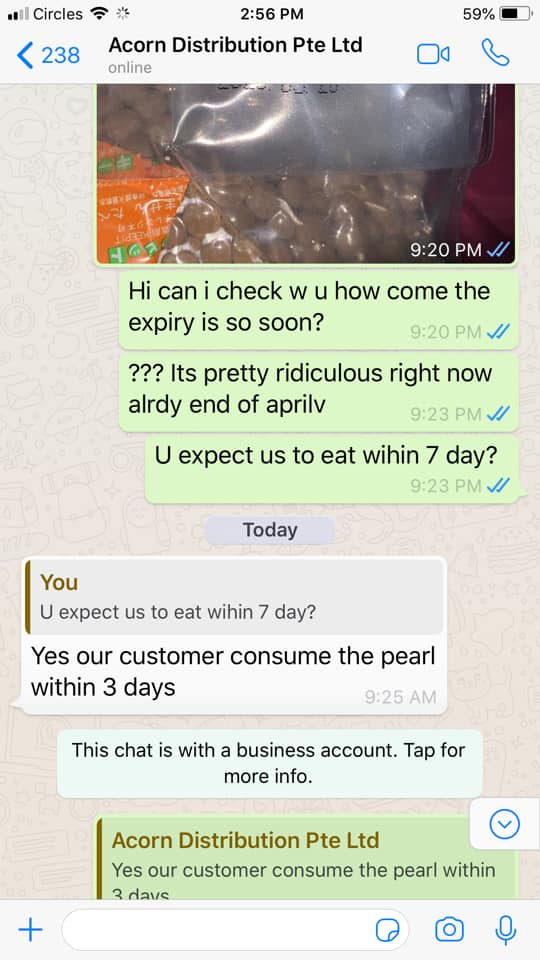 As you can probably tell, Ms Rachel did not get the refund she was looking for, as the company reportedly claimed that it’s only possible for “defective, breakage, or expired goods”.

As of the time of this article, Acorn Singapore has since removed the listing from its website.

MS News has reached out to Acorn Singapore for a statement regarding the incident.

Hope the buyer receives compensation if account is true

Despite how damning the account is, this remains a one-sided account of the story, and hence should be taken with a pinch of salt.

However, if true, we hope the company will provide Ms Rachel with the necessary compensation.

If you’re not a fan of making your own cup of bubble tea from scratch, feel free to check out this list of places you can still order from.