Yesterday, news of The Privé Group’s CEO punching a teen while intoxicated made the headlines. The CEO has since pleaded guilty to 2 charges — one for voluntarily causing hurt and another for intentionally causing alarm.

In response to TODAY‘s queries, the company had reportedly given a controversial statement, which states the CEO had the firm’s “unwavering support”.

On Friday (22 Oct), the company clarified that they do not support violence and has in fact parted ways with him.

They also apologised for the ambiguous statement and said their former CEO’s actions do not reflect the company’s core values.

In a Facebook post on Friday (22 Oct), The Privé Group declared that they have parted ways with their CEO, Jean-Luc Vu Han. 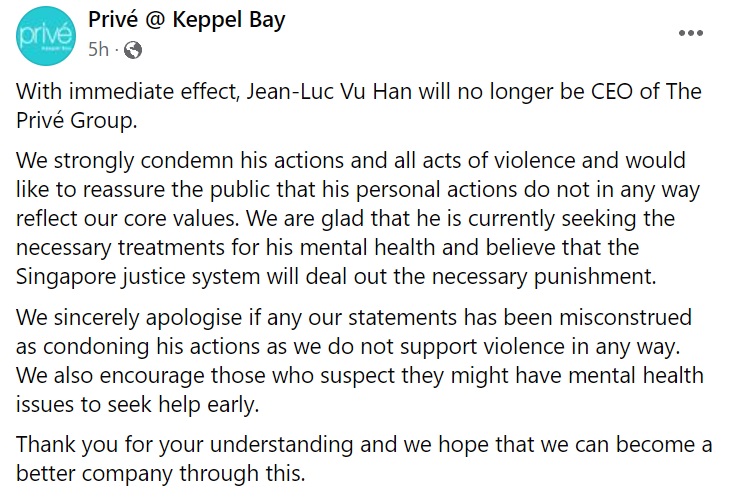 In addition to this announcement, the group also stated that they strongly condemn any form of violence and that the French national’s actions do not represent the company’s core values.

However, they are glad to know that he is now seeking help for his mental health and has placed faith in the Singapore government to levy out the appropriate punishment.

They also took to the opportunity to apologise for their comments from the previous day as they could have been misconstrued.

Here’s the statement that the company issued the day before:

Mr Vu Han Jean-Luc Kha remains a valuable member of our management team and has our full and unwavering support. The case is still ongoing and we have been advised not to comment on the case

Grateful for the clarification

We are glad that The Privé Group has clarified their earlier statement, which was certainly ambiguous, to say the least.

Senseless assault like this should never be tolerated. We hope the French national learns his lesson and will turn over a new leaf.