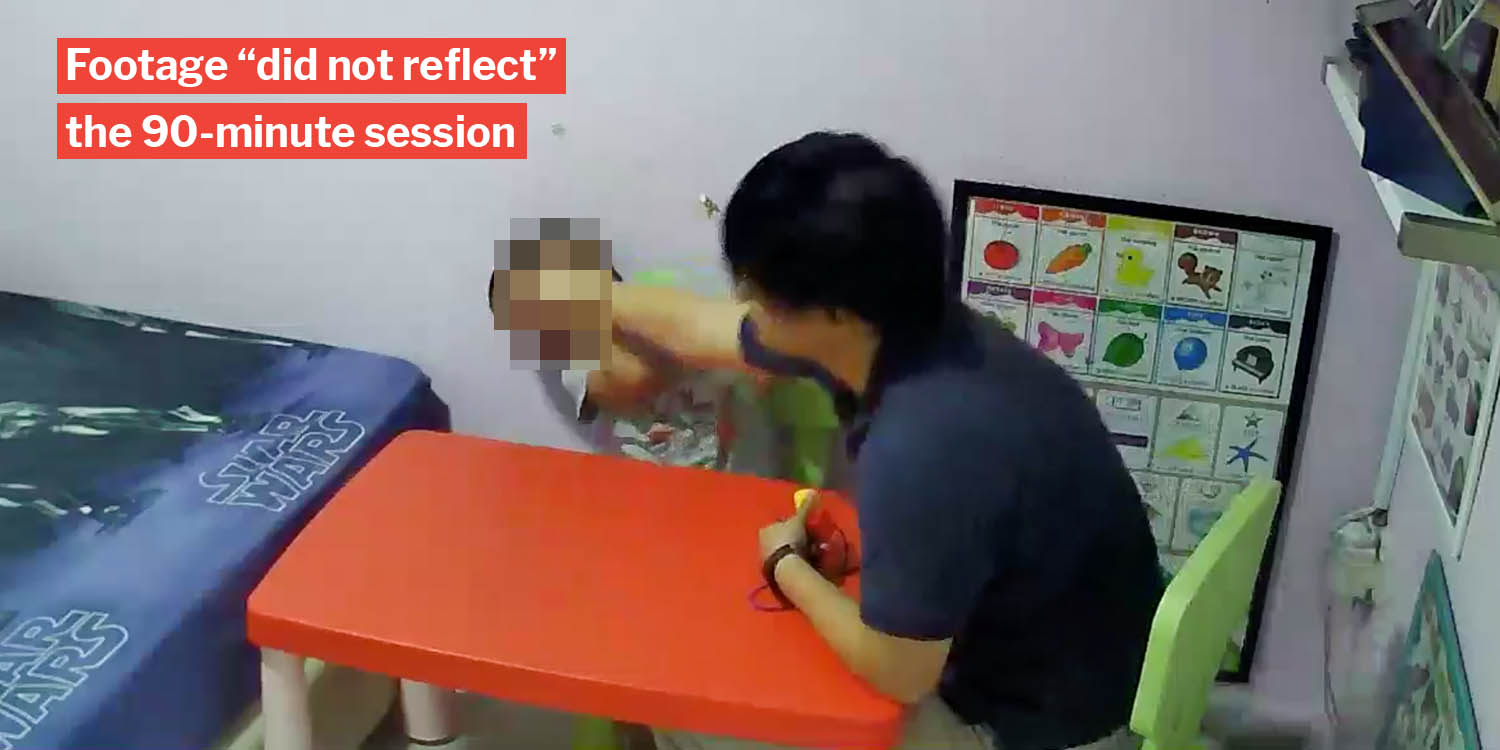 Recently, videos of a child being shoved and roughly handled by an Applied Behavioural Analysis therapist has been going viral.

They even caught the attention of multiple MPs, including Minister for Social and Family Development (MSF) Desmond Lee.

The MSF has apparently been investigating the issue, as the victim’s mother claimed that the therapist was let off with only a strict written warning.

Today (3 Jul), the Singapore Police Force (SPF) released a statement explaining why only a written warning was issued, explaining that the 9-minute video clips “did not reflect” the full situation.

According to SPF’s statement, the investigation – which was closed last year and reopened again in Jan 2020 – involved the Attorney-General’s Chambers (AGC).

After interviewing the therapist, and “other relevant persons” involved, they issued a “written advisory” to the therapist. 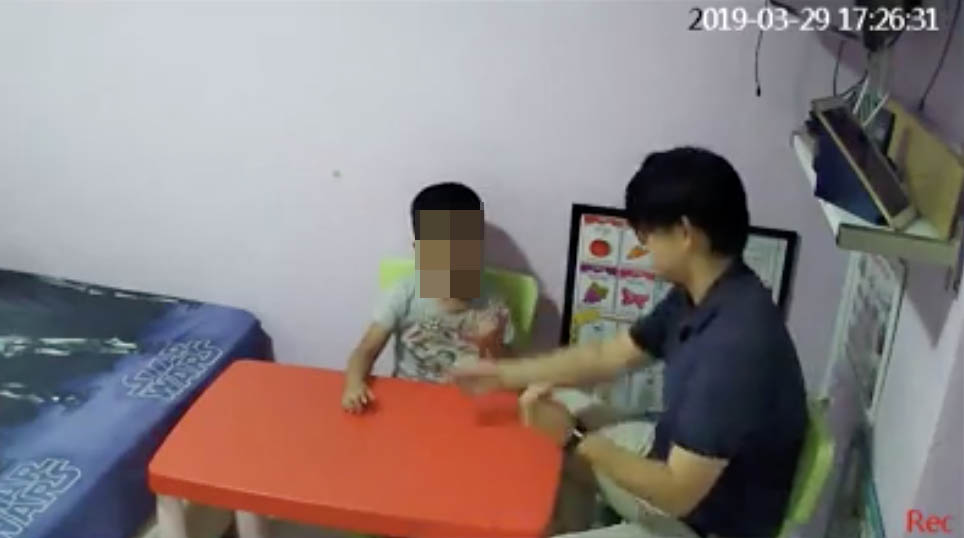 SPF wrote that the decision was made based on the therapist’s behaviour during the 90-minute-long session, and considered the “interactions and dynamics between the boy and the therapist”.

They also reasoned that the 9 minutes’ worth of video clips shared online “did not fully reflect” the situation.

SPF confirmed that the victim’s father made a police report around 11.30pm on that same night, about his 6-year-old son being physically abused by his therapist earlier that day.

The child was taken to KK Women’s and Children’s Hospital on the same day and received a medical examination, but no physical injuries were found.

The family was informed that the therapist received a “written advisory” in Aug 2019.

Investigations in progress when MSF alerted

MSF also released a statement regarding the incident today (3 Jul) on Facebook. 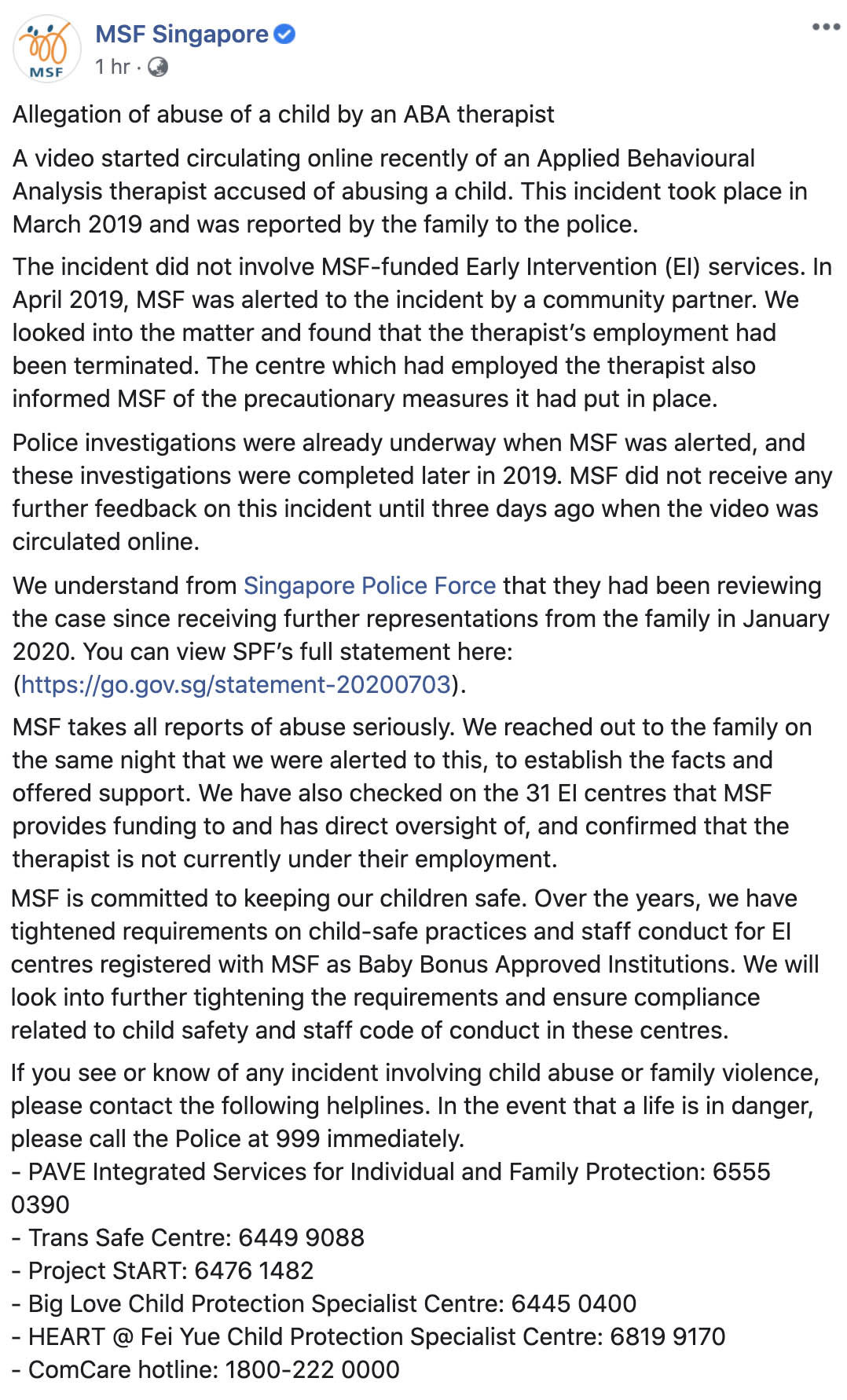 MSF only became aware of the incident in April 2019, and found that action had been taken by the therapist’s employer to ensure such incidents would not happen again. The therapist had been fired as well.

They stated that they were not updated on the case after it was closed, until it was raised again on social media a few days ago.

The family made clear in their recent Facebook post that they were unsatisfied with the outcome from SPF.

According to SPF, they sought legal advice and managed to have the case reopened in January this year, but SPF is still “in the midst of review”.

SPF added that “further guidance from AGC” was sought to conduct the investigation.

Although the video clips definitely do not reflect the entirety of the 90-minute therapy session, the parts that were shown were undoubtedly concerning.

Hopefully, the authorities are able to fairly mete out penalties where deserved, while ensuring such incidents do not reoccur.

We hope the family is able to recover from this traumatic event in due time.