Rather serious dents can be seen on his car.

Tree Branches Fall On Car After Lightning Strikes On 16 Aug

Often, hopeful punters would say that they are more likely to get first place in the lottery than they would get struck by lightning.

If that saying is remotely true, this driver must be extremely lucky to evade the latter scenario on Tuesday (16 Aug).

While driving along Upper Thomson, lightning apparently struck a nearby tree, causing branches to fall on the bonnet of his car.

The driver counted his lucky stars, saying that the branches would’ve smashed his windscreen had he passed by at any other moment.

Instead, he only has to deal with considerable dents around his vehicle. Painful nonetheless.

On Tuesday (16 Aug), TikTok user Joel posted a video of his fortuitous brush with Mother Nature along Tagore Road in Upper Thomson.

Recently made a joke about trees getting struck by lightning because they’re sway. But now is it I’m the suay one? 🤯 #fyp #sgtiktok #sg #accident

His caption to the 10-second clip read, “I recently made a joke about why trees always get struck by lightning. Because they suay. But now is it I suay?”

The clip combines images of his dented BMW, the fallen tree branches and dashcam footage.

The pictures show the BMW’s hood and doors dented from the impact of the fallen branches. 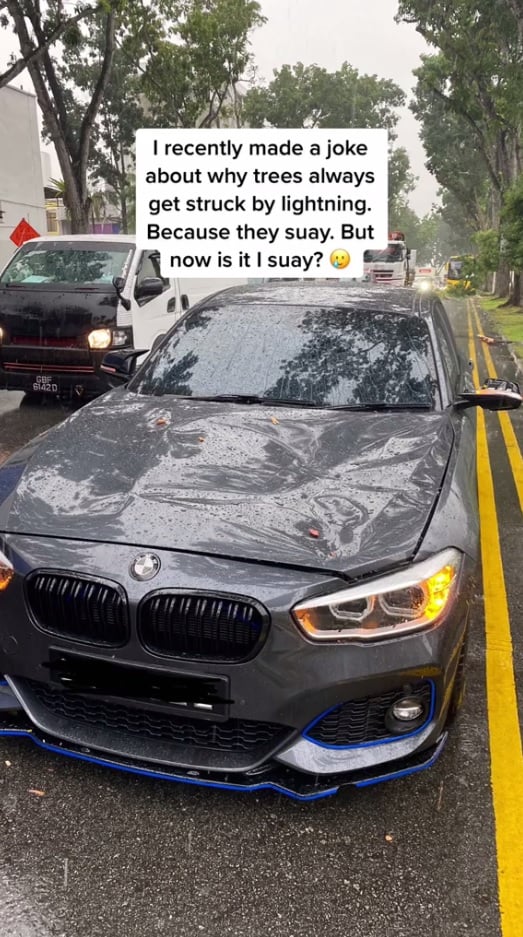 While the video showed broken tree branches hitting the BMW on the move, photos of the aftermath revealed more severe damage to the tree as a result of the lightning strike. 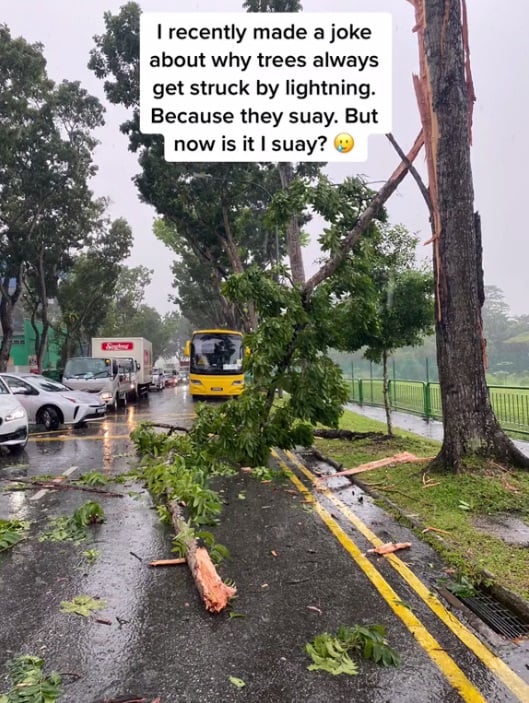 The lightning had apparently caused a significant portion of the tree to fall off, sending much larger and probably heavier branches tumbling to the ground.

Watching the dashcam footage closely, viewers could easily spot the lightning bolt striking the tree in a flash, briefly leaving a smoking trail in its wake.

A large chunk of the tree’s bark flew toward the BMW, landing on its hood.

Had the car been further ahead at that moment, Joel estimated that the debris could have impaled its windscreen.

Perhaps aware of the extremely close shave, Joel said he’d start counting his blessings after a netizen pointed out that the whole tree could’ve collapsed.

To pay for the damages, he shared that he’ll be claiming insurance under the “Own Damage (OD)” category and cover any excess himself.

But Joel predicts that his premium will likely increase thereafter.

Thankfully, Joel seemed to have walked away from the incident relatively harm-free.

Hopefully, his insurance claiming process will go smoothly and his car will be good as new after some repairs.

We also hope that Joel and all other road users out there won’t have to experience such close brushes in the future.