All everyone can talk about is the World Cup right now.

And honestly, we’re so psyched that we decided to dig a little deeper into the history of every nation’s performance since the inception of the FIFA World Cup.

Based on stats found on the official FIFA website, here’s a quick look at how each country has performed over the years, in order of their FIFA rank. 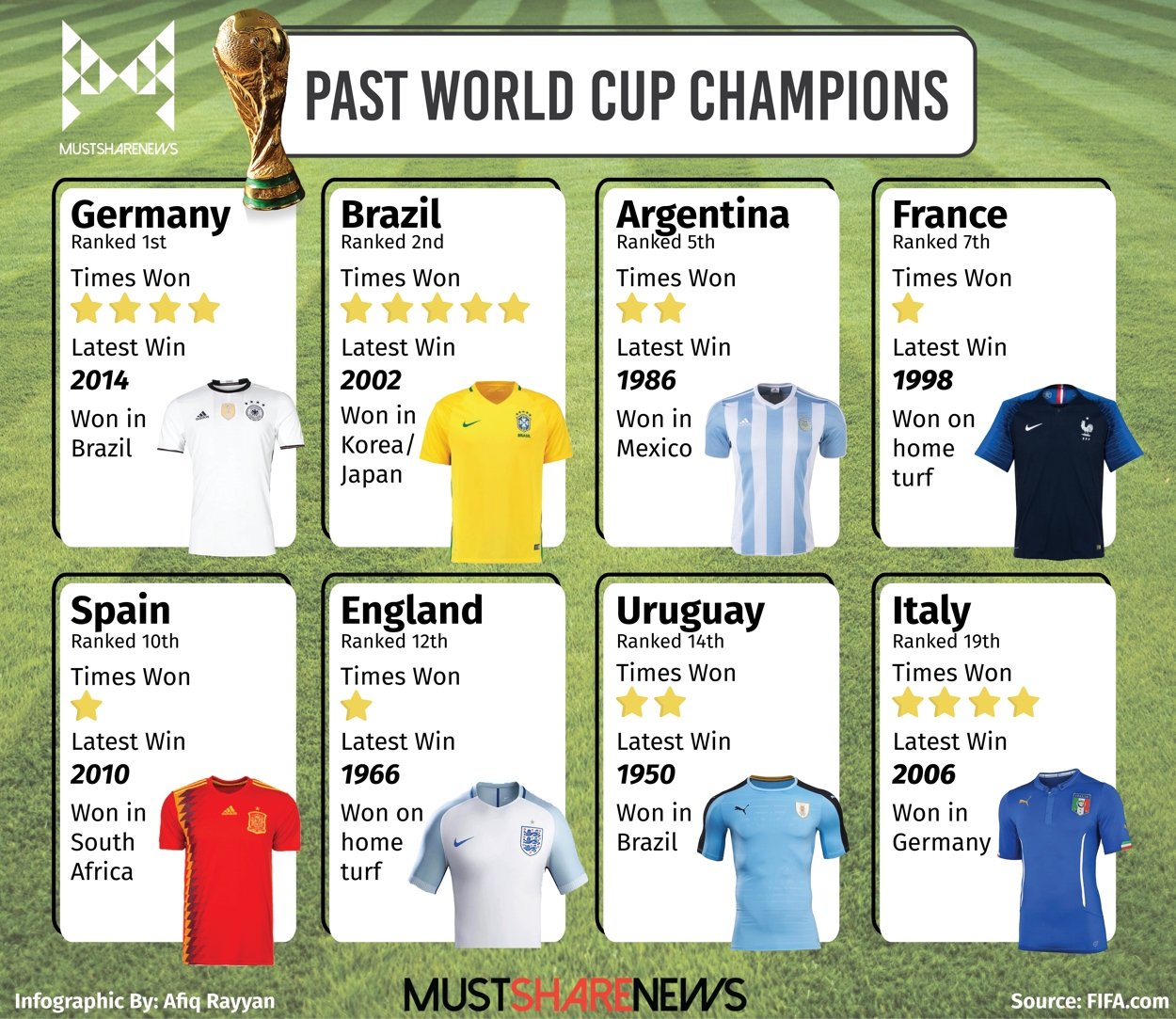 Germany’s team, known for their structured gameplay and the heartbreaking 7-1 match against Brazil, sits pretty at the top of the FIFA ranking.

With a total of 4 World Championships under their belt, they definitely deserve their placement.

Coming in at a close second is Brazil, which has consistently emerged world champions a whopping 5 times.

Touting an average ranking of 3rd, this means they haven’t really performed too shabbily years either.

They also don’t seem to need a home ground advantage, having won when Korea and Japan were hosts in 2002.

Then again, they haven’t won the previous 3 World Cups, so all eyes are on them to pull off a stunning victory this year, with star player Neymar in tow.

Argentinians seem pretty consistent with their performance, having come close to World Champions against Germany in the last World Cup.

With an overall ranking of 5th and a similar average fifth placing.

However, their latest world cup win came way back in 1986.

Despite their draw against Iceland in the Group Phase, involving a rather disappointing performance by star player Messi.

Looks like the home ground advantage really boosted their morale.

Spain slides into 10th place, with an average of 5th in terms of matches won and overall average FIFA ranking.

For a single world champion placing won in South Africa.

You know, the year with the ridiculously catchy ‘Waka Waka’ theme song by Shakira.

But they do scrape a 12th overall placing, and 10th on average, with a total of 1 World Cup win.

This was back in the good ‘ole 60s, on their home turf in England, at Wembley Stadium.

You may be wondering why Uruguay made the list. Ardent fans will tell you it’s because they’ve actually won 2 World Cup championships before.

Italy rounds out our list at a 19th FIFA overall ranking, and average rank of 8th in the world.

Their latest World Cup win was in 2006, hosted by Germany.

A hefty 4 championship titles are also on their resume, so things look quite good for the crowd favourites in this year’s World Cup.

Win or lose, we’re not denying that this may be the year of the underdogs.

With team Iceland pulling off a major upset with their opening 1-1 draw against World No. 2 Argentina, ex-champs Germany losing to Mexico and Brazil tying with Switzerland.

But in case you were wondering how many years it took for these countries to get to where they were, here you go.

All the best to all the nations who qualified, you’re all still champions in our eyes.