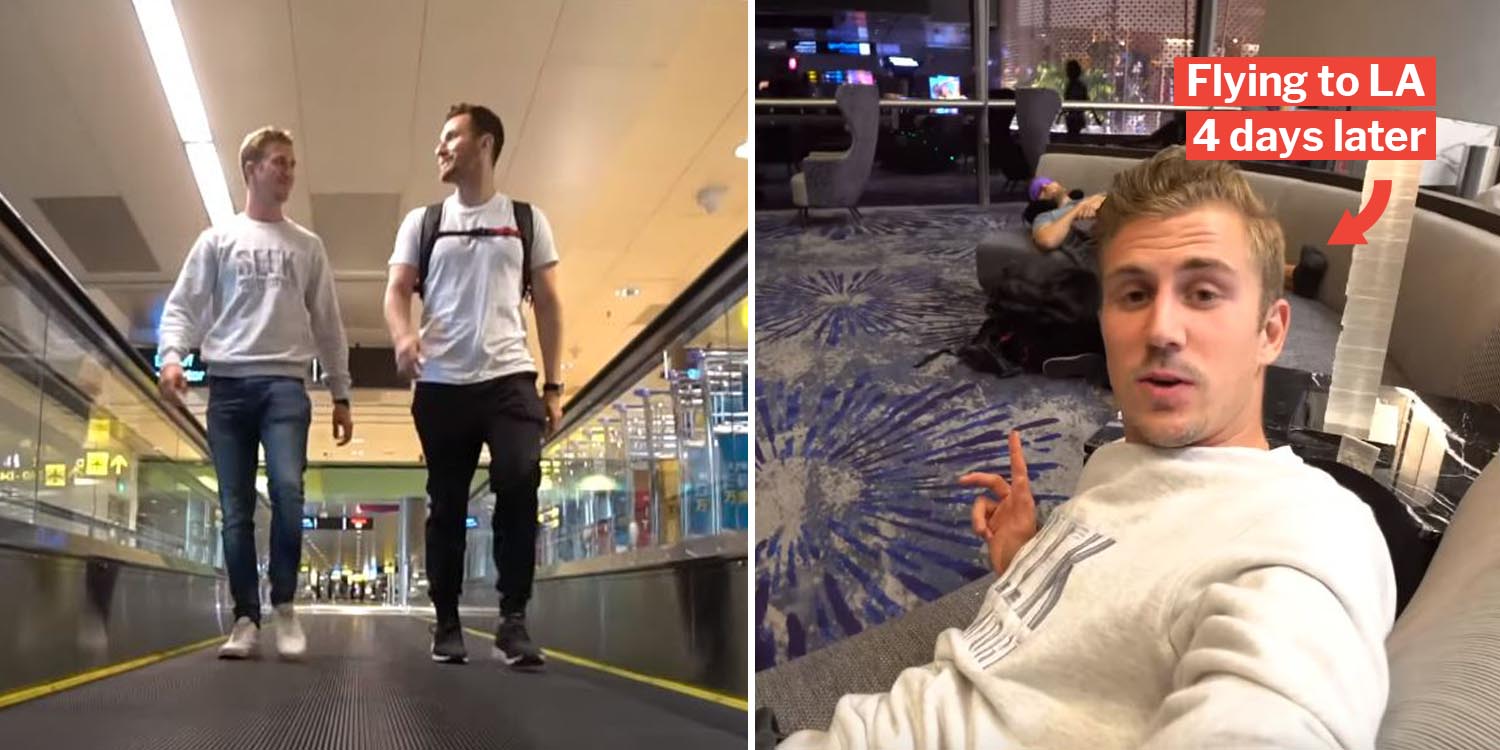 News flash: It’s illegal to misuse your boarding pass to enter Changi Airport’s transit area. Especially if you have no intention to catch a flight.

But, two guys from online travel community Yes Theory seemed to have found a loophole. They bought air tickets to enter the transit area without intending to board their 1st flight.

And then, they bought tickets to fly to Los Angeles 4 days after their 1st flight.

Their daring “experiment” to see if anyone would notice was fully recorded and uploaded to their YouTube channel on 1 Jul. It has since garnered over 4 million views. Their exploit as featured on LADbible
Source

At the beginning of the clip, the two guys wondered aloud if people would notice anyone staying in airports if flights were cancelled.

They were also motivated to test their theory after watching a 2004 movie The Terminal – a story partially inspired by a man who lived in Paris Airport for 18 years.

One of them said,

It truly left us wondering, are the rules still the same. And what would happen if we tried?

Thus, began their story of being “human guinea pigs” – as they put it – in this so-called experiment.

Flew in from Australia en route to LA

Of course, they picked Changi Airport, the number 1 airport in the world.

Their goal, according to the video, was to spend 72 hours in the airport to see if anyone would notice.

On a Tuesday at around 1.20pm, they checked in using the boarding passes for their faux flight. At 2pm, they said they officially missed their flight, and that “now is when the action begins.” 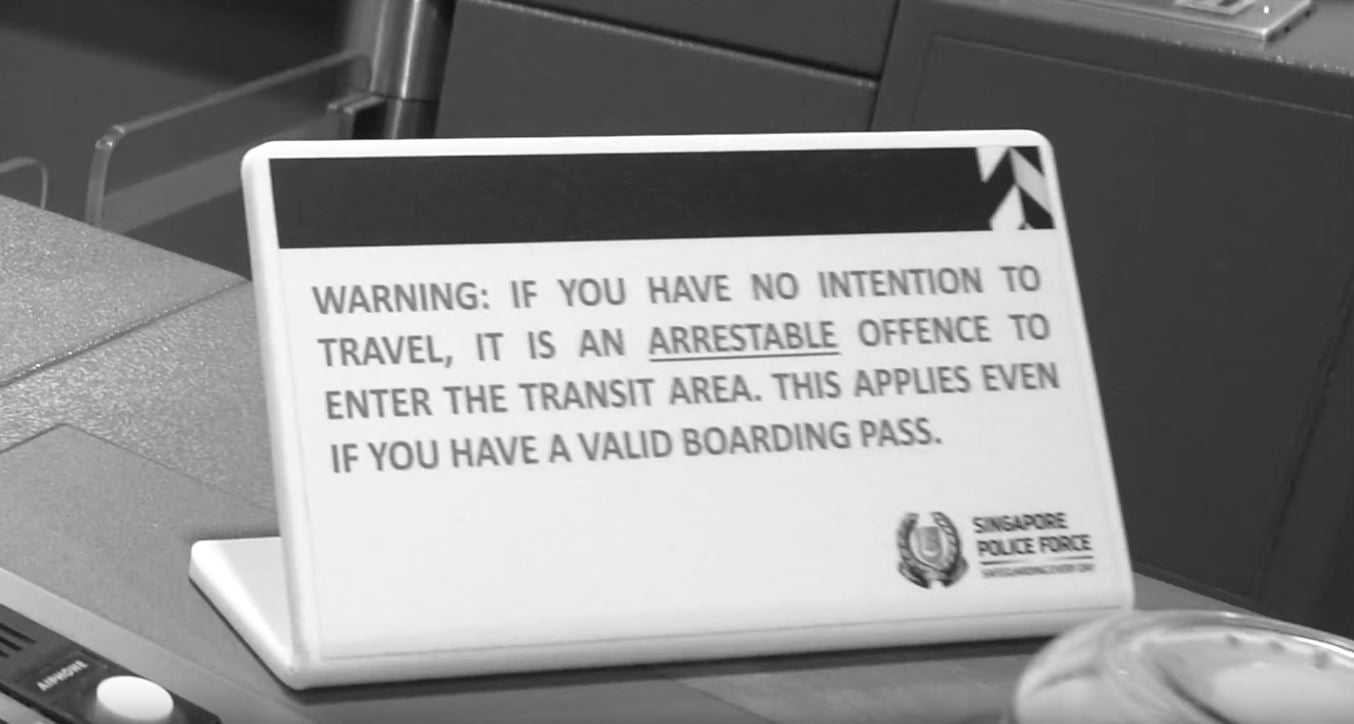 Before noticing this sign, the duo wasn’t 100% sure if what they were doing would be illegal.
Source

Cue a sense of impending doom.

The two guys seemed to get over this sense of doom rather quickly when they realised the variety of food options available.

During their 3-night stay, they took advantage of Changi Airport’s full array of amenities that are reminiscent of a comfy hotel. 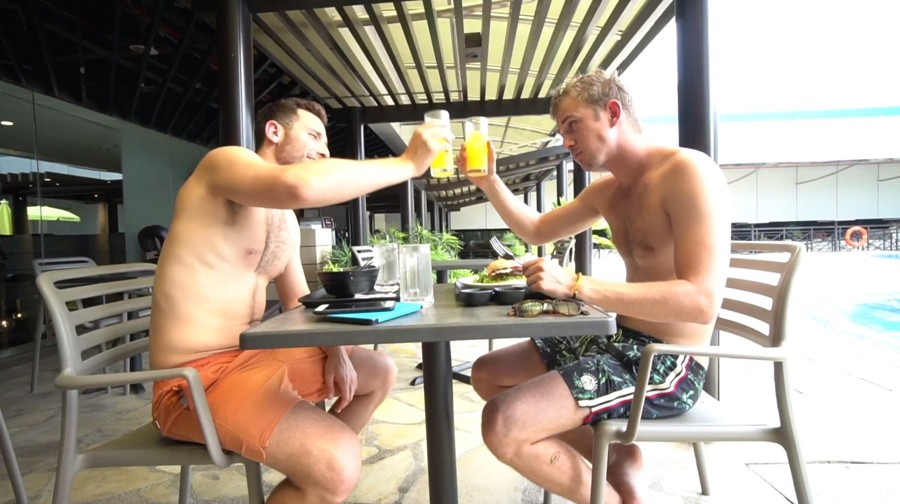 Burger and fries by the pool
Source

We don’t blame them. After all, there are entertainment decks with 24-hour movie screenings, a swimming pool, a gym, and a massage parlour, among others. 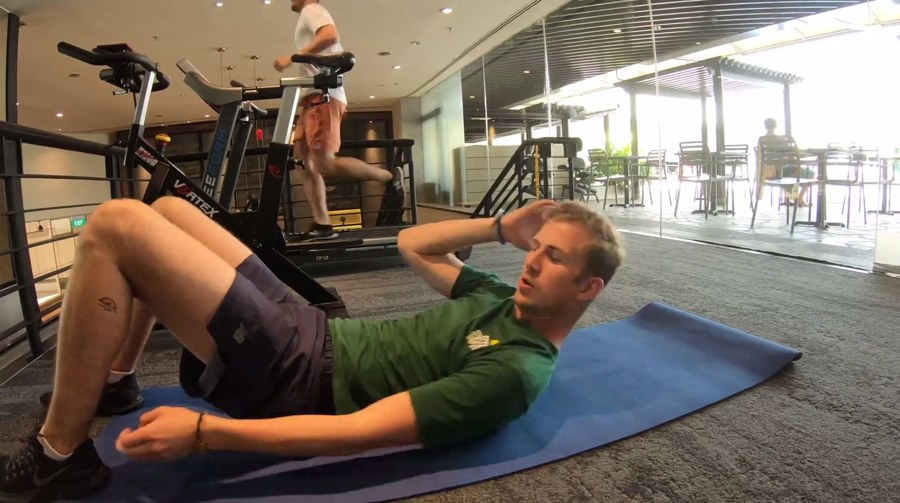 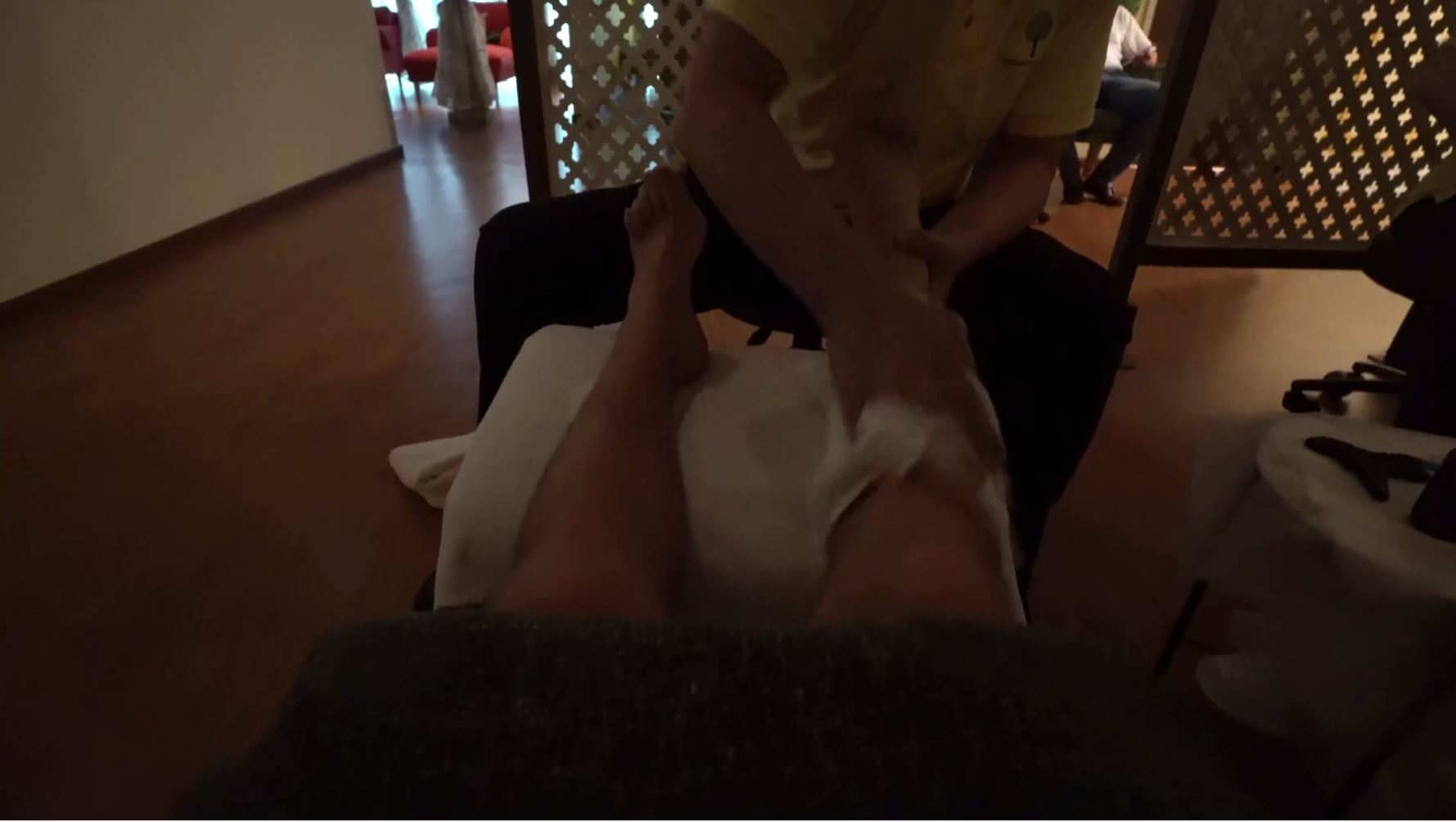 They didn’t forget that these were all risky luxuries though, when one of them shared,

I think this whole experience would not be so bad if there wasn’t a baseline layer of fear. Because I don’t know if this is allowed or not.

On their 1st night, one of them said he had a fear of being woken up by security personnel demanding to see his ticket.

While his friend dismissed it as a “weirdly specific fear”, we can’t say it wasn’t warranted.

During their 2nd night in T3, their fear came true. At 3.30am, they were woken up by police personnel conducting a security check. 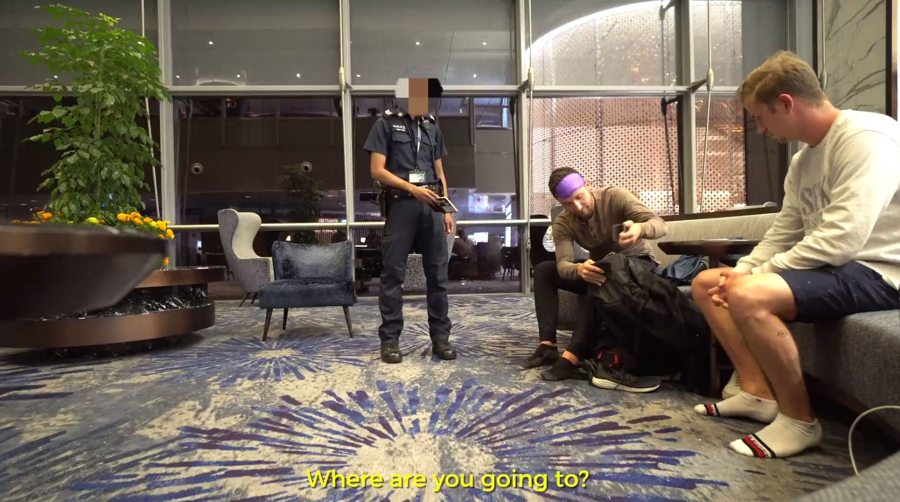 The officer asked to see their boarding pass and passport, to which the two guys said they missed their flight.

“Did you rebook your flight?” the officer questioned, requesting to see their ticket.

Thankfully, they had their LA flight tickets to show. The officer left after checking a document on their phone.

Checked into a hotel in the end

At this point, the two guys knew that their last night at the airport would look suspicious. They relented and checked into a hotel, where they could get uninterrupted sleep from 11pm to 7am. 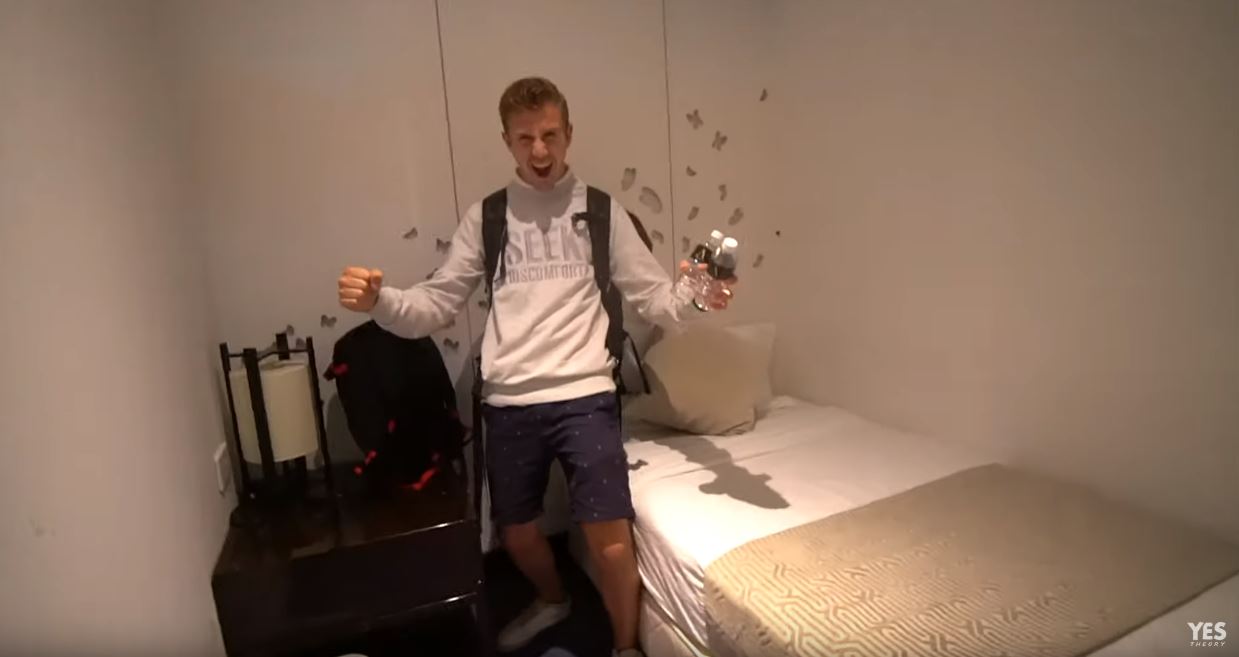 The next day, they shared that they “couldn’t be more relieved” to go home after spending 4 days at Changi Airport.

As startling as it was to be woken up by security, they related that they felt a greater sense of safety knowing that airport security does, in fact, double-check on travellers.

But, the million dollar question remained,

Did anybody ever realise what we were doing, or did we just live inside this airport for 4 days without anybody noticing?

Consequences of getting caught

Entering the transit area with no intention of boarding a flight is no joke. People have been arrested for it — even if it was only to see your friend off, or meet your K-Pop idol.

According to The Straits Times, transit areas of Changi Airport are gazetted as protected places. Police said those who misuse their boarding pass to enter transit areas, with no intention of proceeding to their next destination, can be prosecuted in court.

In the case of the Yes Theory guys, what they did falls under a grey area. They had their return ticket, after all. It’s best not to replicate this experiment though.

We have reached out to Changi Airport for their comments. Meanwhile, what do you think of Yes Theory’s experiment? Let us know in the comments below.