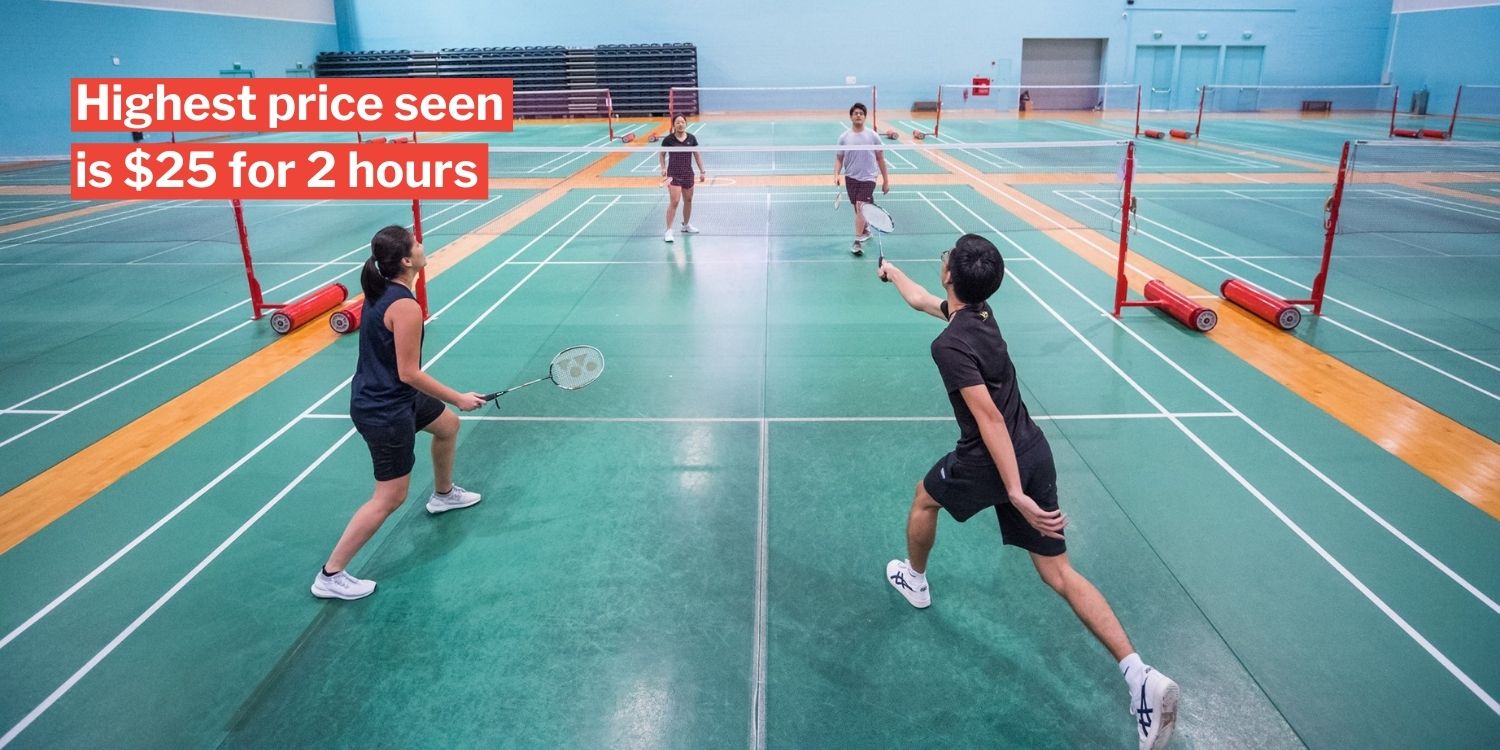 The situation has become worse due to Covid-19.

Given our crowded island and the limited number of sports facilities available, booking courts for popular sports like badminton has always been difficult.

Now with safe distancing measures due to the Covid-19 pandemic, players have said it’s become almost impossible to find a court via official means. 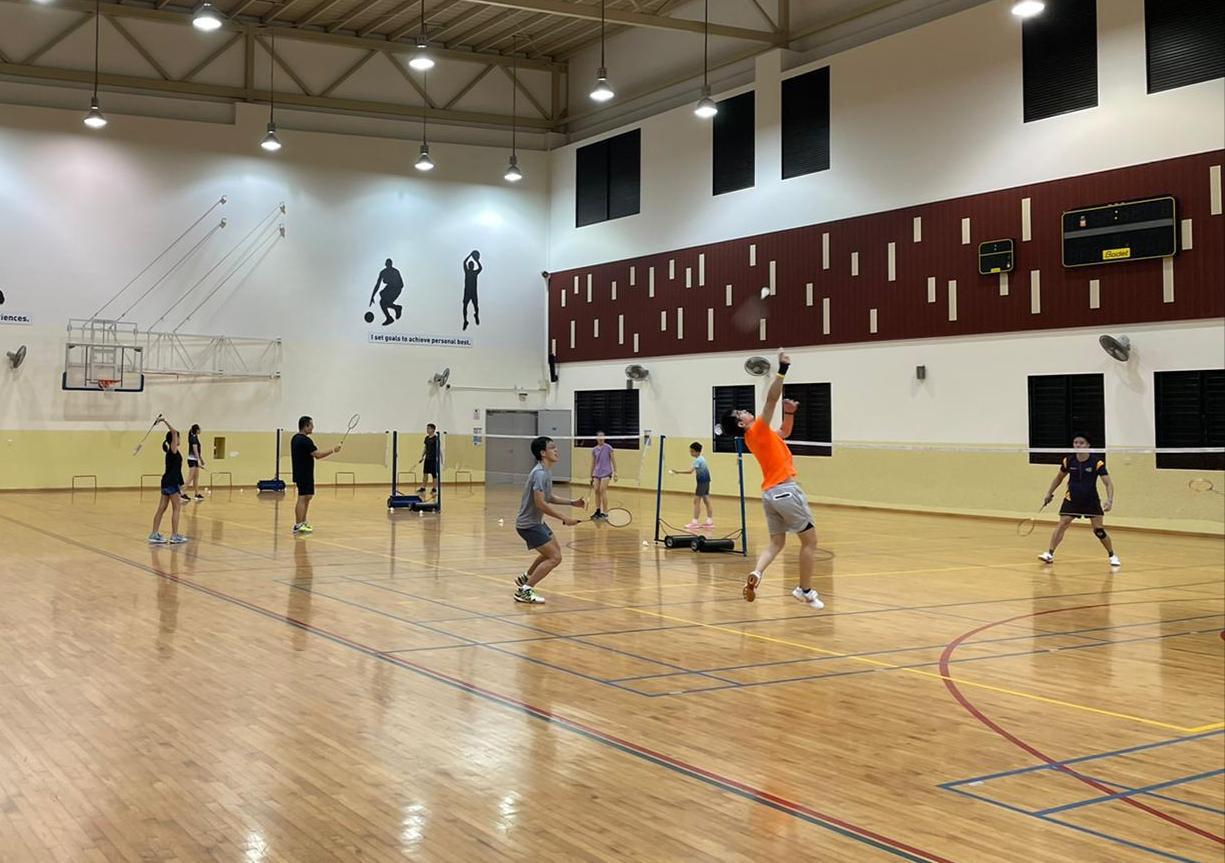 With official means exhausted, online sellers have predictably sprung up, selling bookings to those who’re desperate to play.

However, if they’re so difficult to book, how do these sellers manage to get them?

According to badminton enthusiasts, they need to stay up till midnight and book a slot the moment it becomes available.

IT consultant Josh, 35, used to play badminton with his friends every Saturday and Sunday, usually at ActiveSG sports halls and the OCBC Arena.

But since Covid-19, he told MS News that they rarely get a chance to play and have since stopped – because it’s “very competitive to book courts”.

For example, on Monday (25 Jan), bookings for courts at school sports halls are open till 8 Feb via the ActiveSG app.

But when Josh tried, all he gets is the same message: No available slots found. 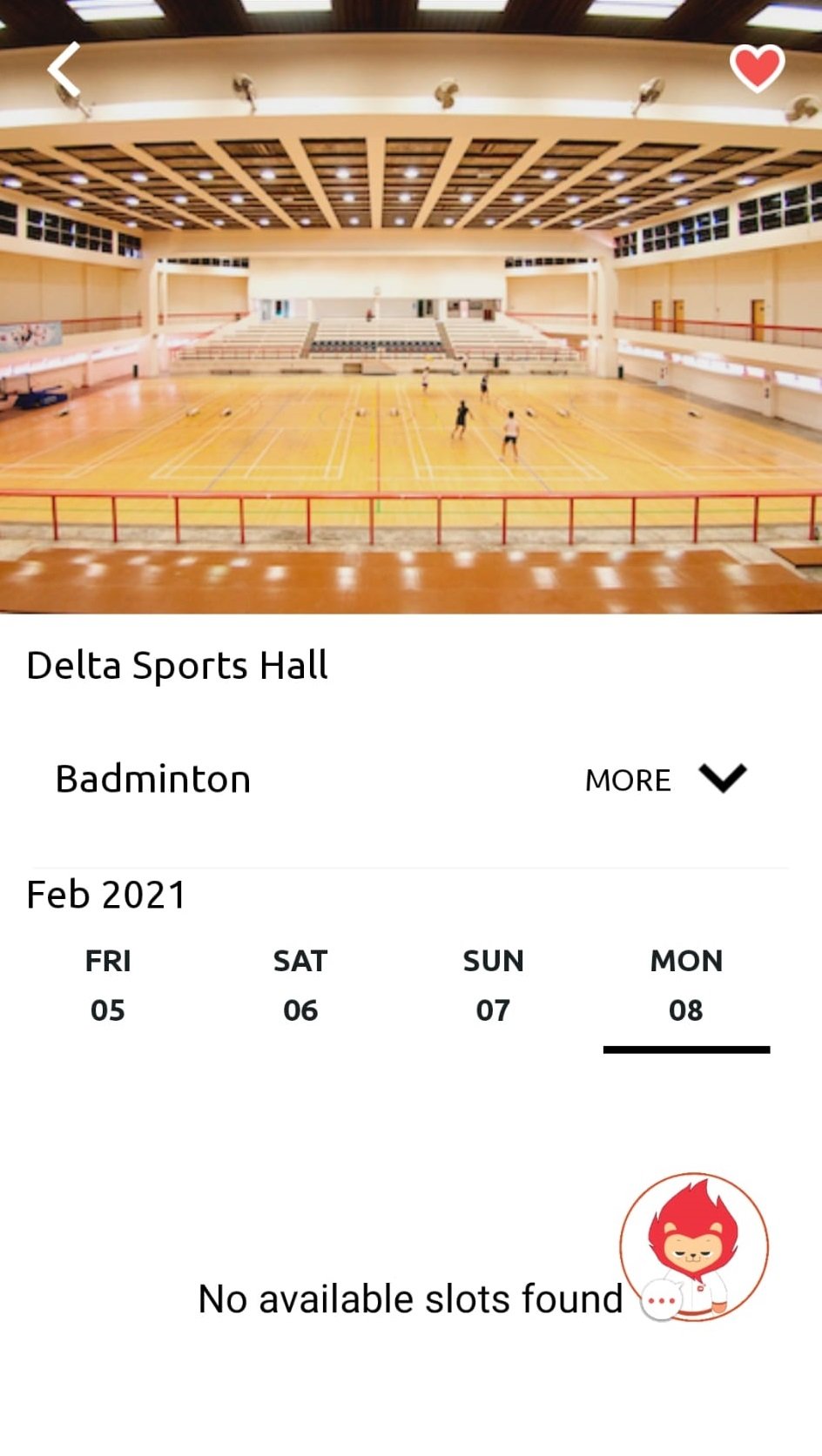 Over at the OCBC Arena, it’s the same story.

Checks by MS News on the Sports Hub website showed no slots available for badminton at the OCBC Arena from till the latest booking date, which is 1 Feb. 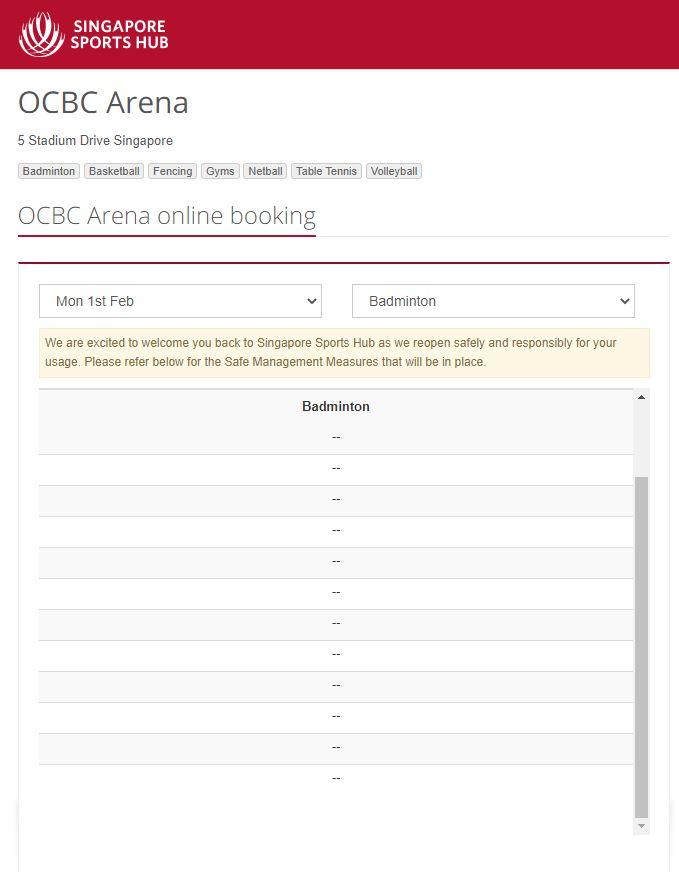 What does one have to do to play a game of badminton in Singapore?

A variety of slots available online

Look to the Internet, it seems. In contrast to the dead ends found via official booking channels, many slots are available online.

On Carousell, bookings can be found at a variety of courts around the island, for slots on weekdays and weekends. 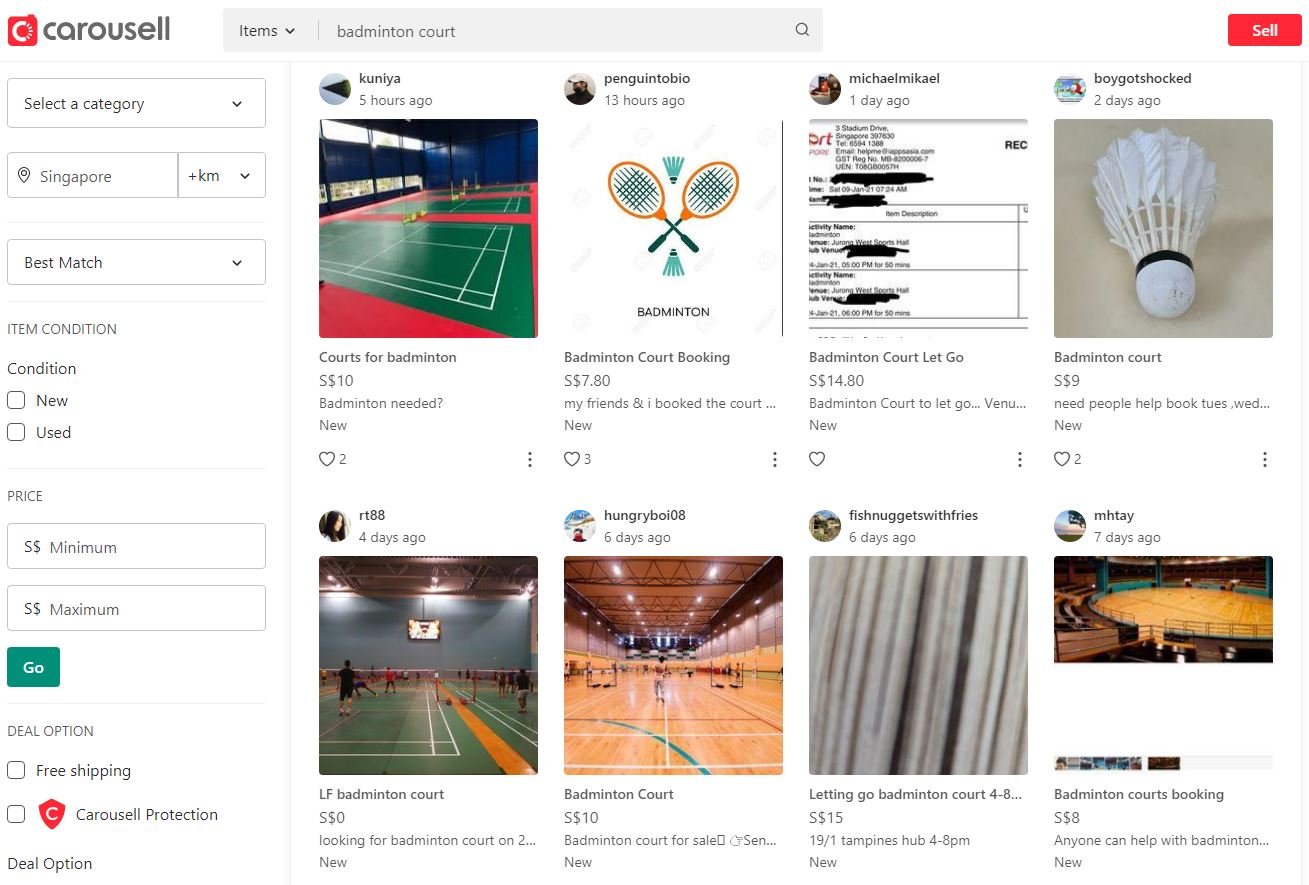 The prices seen by MS News ranged from $7.80 to $15, though the duration of the bookings ranged from 1-4 hours. Most were for peak periods in the evening or weekends.

If they’re booked via the ActiveSG app, the booking fees are usually $3.50 an hour for morning non-peak period, but about $7 an hour in the evening peak period.

Badminton meetups for a price

Over at Meetup, organisers were holding badminton sessions at popular timings on evenings and weekends – but at a price. 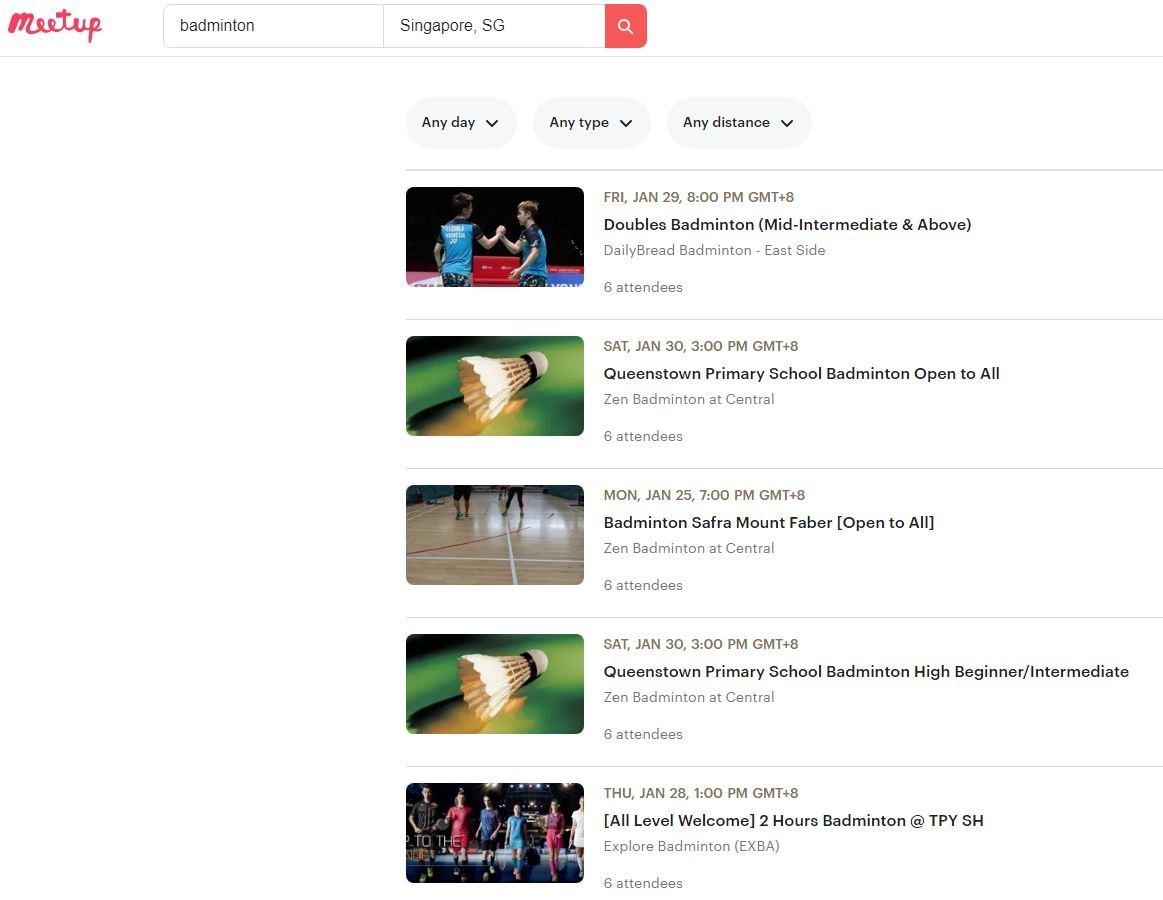 For example, “FM Badminton Club” organises 2-hour sessions at Toa Payoh and Bishan sports halls for a maximum of 5 players, at $10 per person.

That’s $50 for 5 people, for a court that should cost $7 to book via ActiveSG. But those are at awkward timings for working adults – weekday mornings and afternoons.

Those who want to play at popular times can sign up for games with “NorthEast Badminton Club”, which organises sessions at the OCBC Arena on weekday nights. 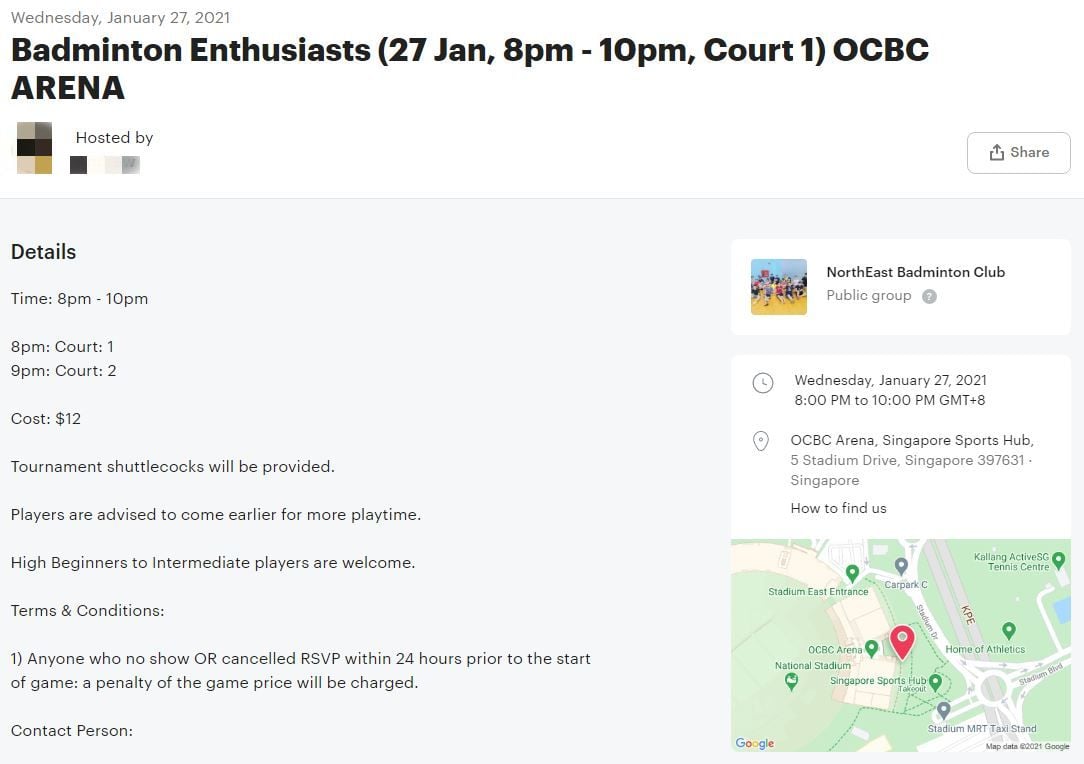 On Facebook, one just has to head to groups like Singapore Facebook Badminton Group and Badminton Singapore to find people offering a badminton for competitive fees. 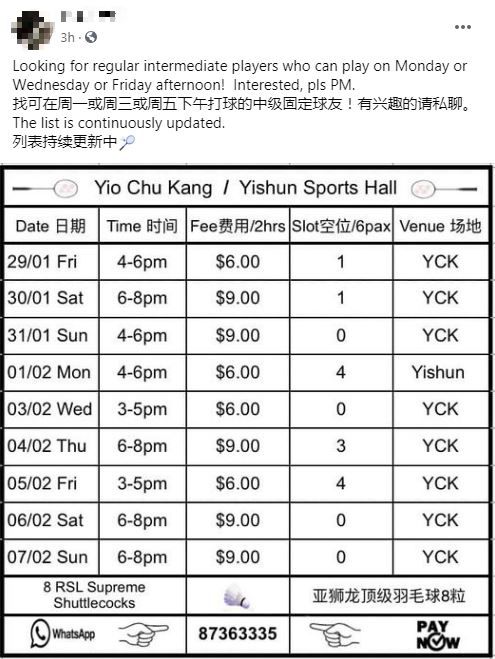 If you’re not fussy about who you’re playing with, there’s a wide range of venues, time slots, durations and price available to suit almost anybody. 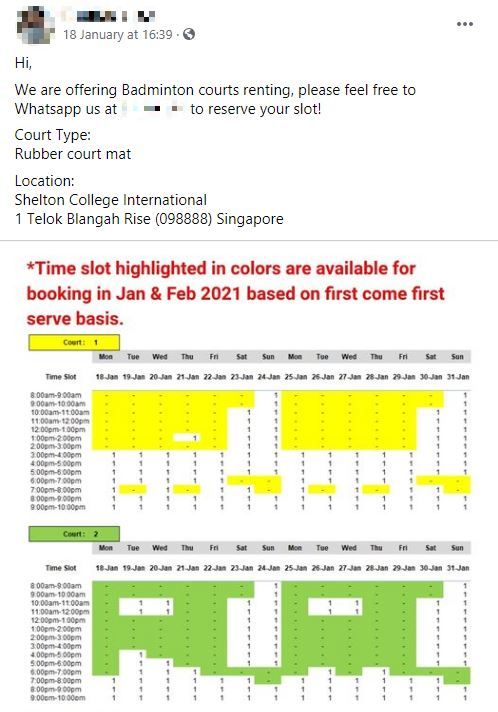 Model Lucy, 28, told MS News that she doesn’t book courts for herself, so she relies on friends to book courts.

Failing which, she joins the Meetup groups, as they’re “more convenient”.

In her group, she had to pay about $8 for 2 hours, and she not only avoids the hassle of booking a court, but everything is provided for, even shuttlecocks. 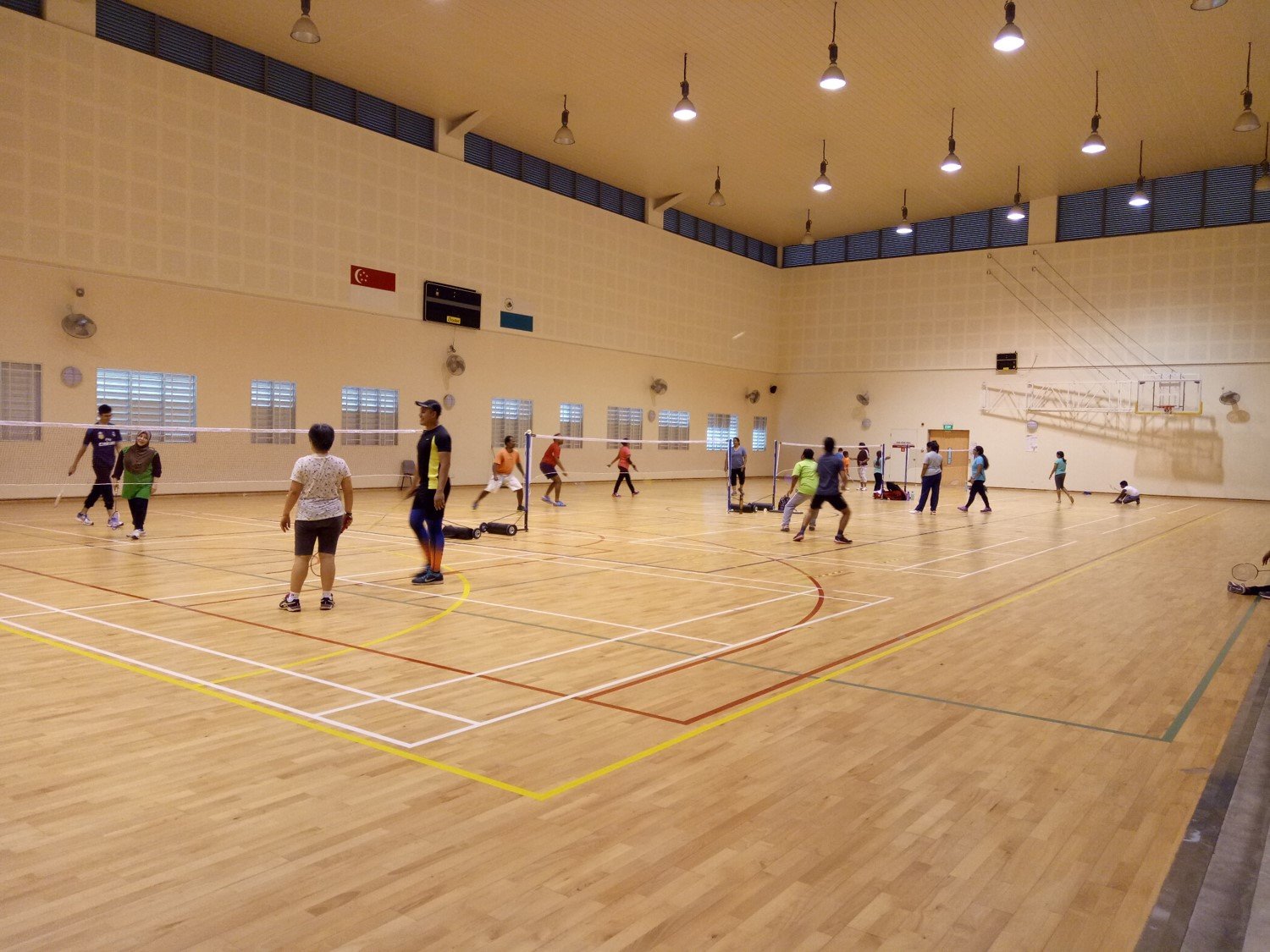 If she books a court herself, she’ll have to pay $3.50 per hour, and stay up late just to grab a court.

However, with the current capacity restrictions, each court can only have 4 or 5 players, down from 8 previously. Hence, the prices have also increased.

Those who get courts stay up till midnight

If the courts are so difficult to get, how do these meetup organisers and resellers manage to get them?

Josh said they have to stand by the app and book quickly when the system opens up new slots at midnight.

If they’re even 5 minutes late, he said, there won’t be any slots left.

Even for the OCBC Arena, he managed to get a slot there for 9-10pm on Sunday (24 Jan) only after 3 or 4 tries. He also booked 1 week in advance and stayed up till midnight. 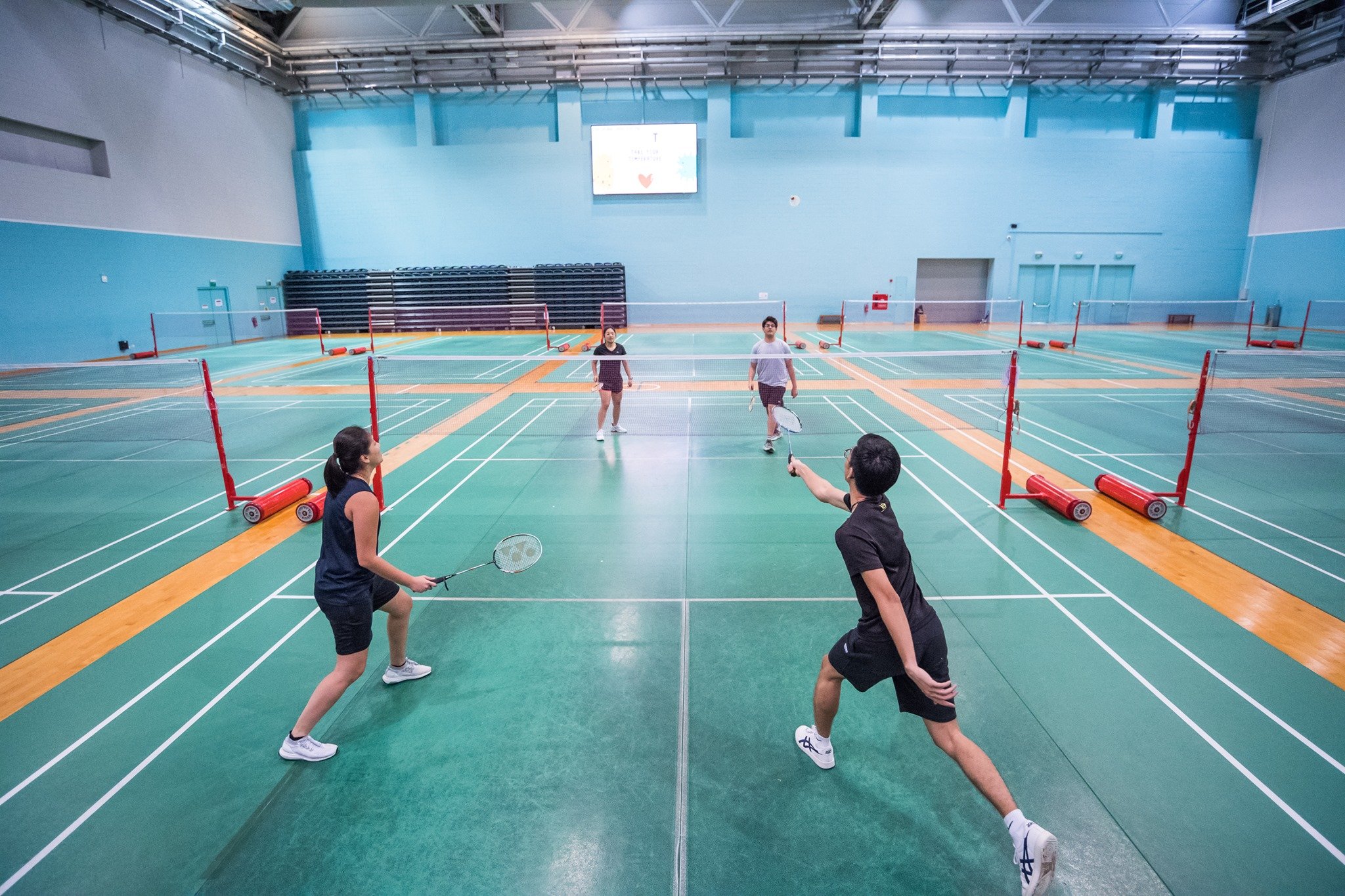 For the OCBC Arena, only a maximum of 4 persons are allowed per court, and players need to clear out 10 minutes before the booking ends to prevent intermingling with other users.

Paying extra for the convenience

In Lucy’s opinion, the reason why resellers profit is because they manage to get as many courts as possible using multiple systems in the wee hours.

Thus, people who get courts from them are paying an extra fee for the convenience of not having to spend that amount of time and energy.

However, she does concede that others will complain because they’re being deprived of being able to book peak-hour slots that are already quite limited.

Is reselling court bookings a problem?

Regular badminton player Edward Loh, 28, who’s an accountant, doesn’t think that the reselling of courts is a problem.

After all, it’s a reflection of supply and demand, he told MS News.

He added that Singapore has limited courts, and unless players are willing to make the effort to stay up till midnight, it’s always going to be tough for them to get a booking. 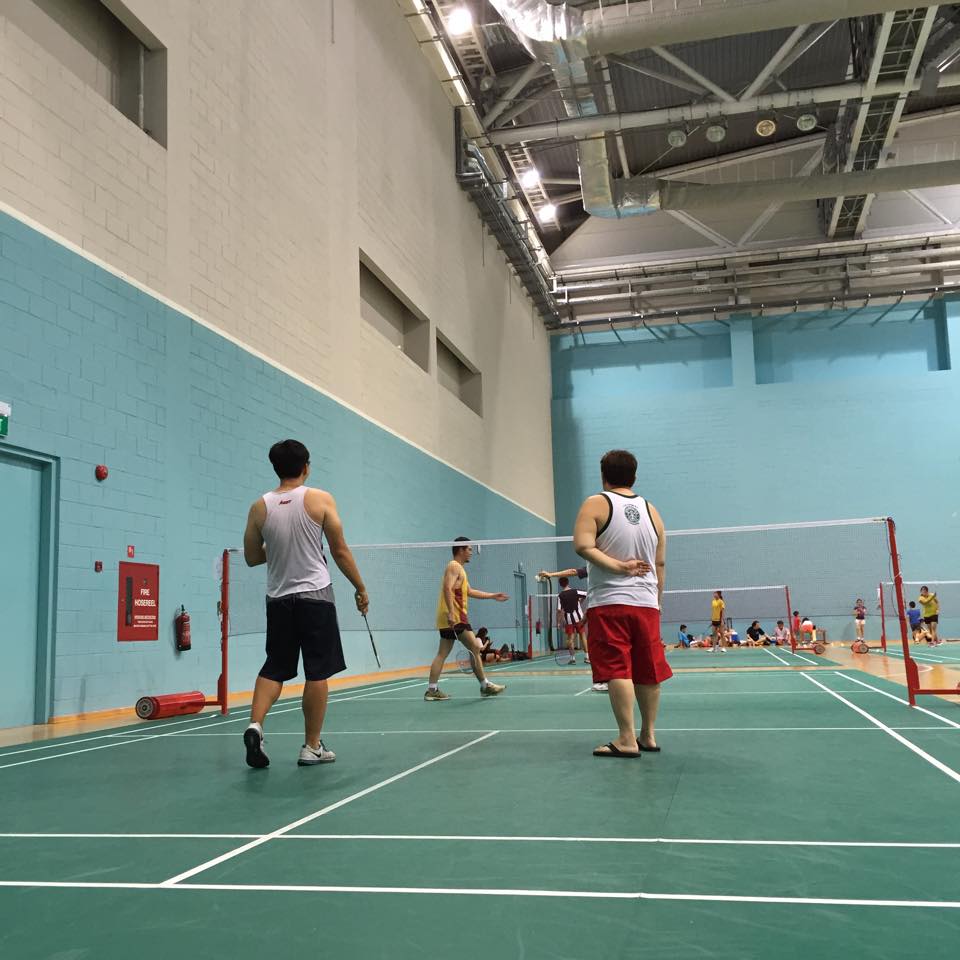 This is especially more so now, with the Covid-19 situation.

He feels that resellers do make the effort to stay up late and chope courts fast, so why should those who’re not willing to do so begrudge them a bit of profit?

He does think, though, that ActiveSG should do a better job banning bots so that people have a fairer chance of snagging bookings.

The market will balance itself out

To Edward, it’s reasonable to pay $10 per hour to play between 6-10pm at a Community Centre court, as such bookings are hard to get.

However, he says nobody is going to pay that price to play during unpopular weekday mornings, when it’s usually $3.50 hour.

Thus, he’s of the opinion that the market will balance itself out, saying,

The prices will reach equilibrium eventually, there will eventually be some that are reasonable.

The highest price he’s seen online was $25 for 2 hours – for a Saturday evening booking at a school court. Though that works out to $12.50 an hour, do note that it’s probably the most sought-after time slot you can get.

For some, the only option is to wait

For Josh, however, this is cold comfort.

Before Covid-19, he was part of a community of badminton players who played a lot.

Now, he said they can’t indulge in this hobby as much any more, as they’re struggling to find a slot. Even if he’s willing to fork out a higher price book from resellers, he may not get to play with those in his community due to the scarcity of slots.

Thus, the only thing they can do is be patient and wait, he said.

It seems that a thriving online market has emerged as the number of badminton players exceeds the courts available.

While it shouldn’t be so difficult for people to engage in a healthy activity in Singapore, that’s the reality of living in a crowded country with limited spaces.

Hopefully Covid-19 will subside soon, and the possible relaxation of capacity limits can alleviate the crunch somewhat.