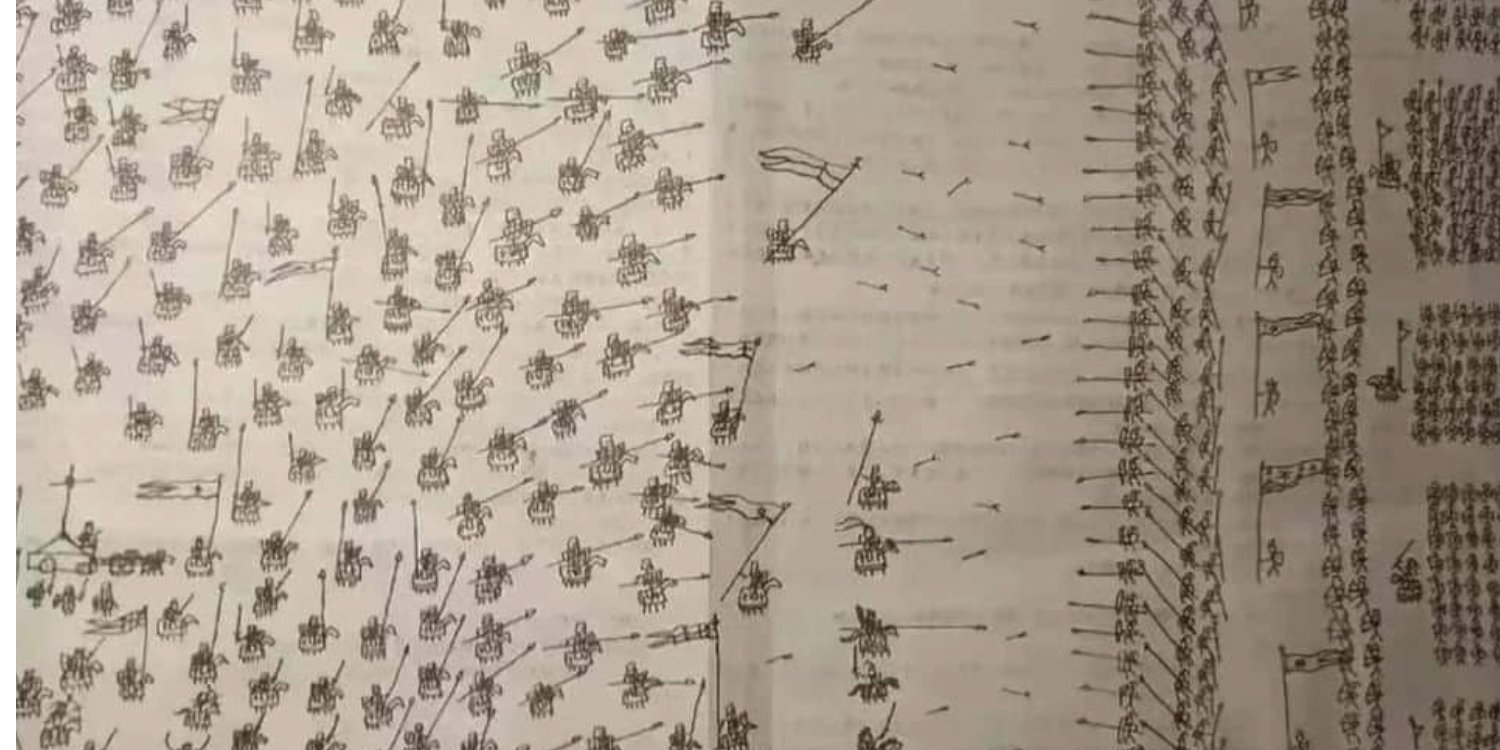 Kids are known for having vivid imaginations. Their natural curiosity towards all things inspires them to think and create something out of the box.

Given the right nurturing, that imagination can be sharpened into a great artistic talent or an innovative mind.

One mother may have found such a talent in her son, as she came across a highly detailed drawing of an army battlefield by the boy. 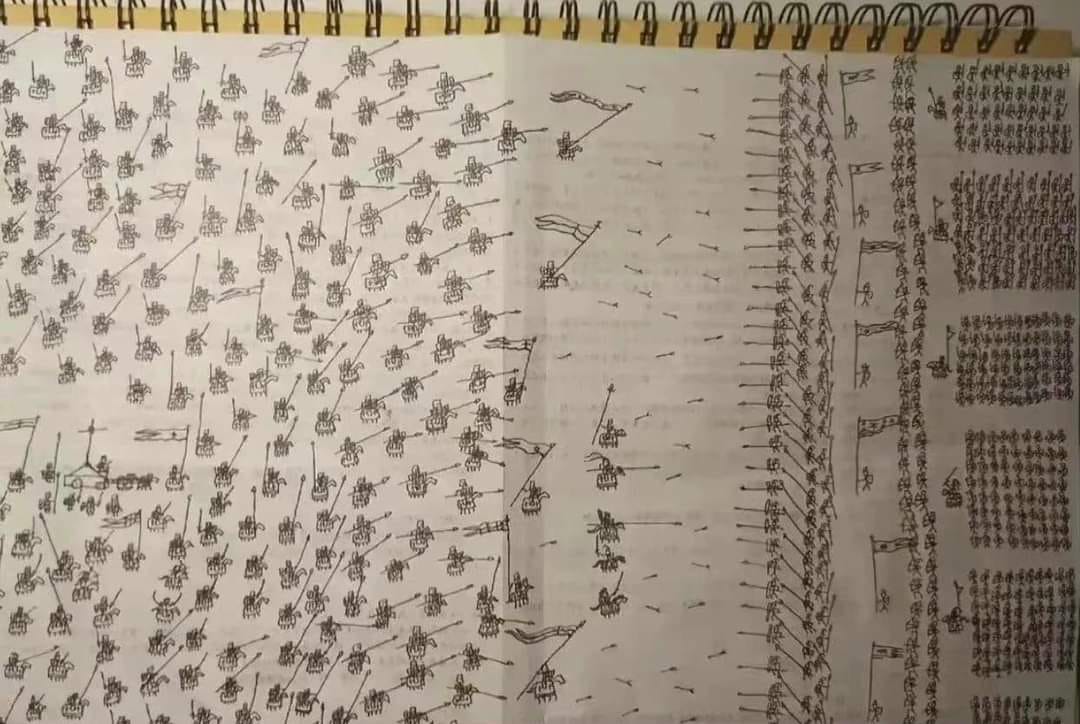 She stumbled upon the sketch in his schoolbag while rifling through it to figure out why he had been getting bad grades at school.

The supposed father of the boy posted the army battlefield drawing to a Facebook group last Friday (24 Jun).

The drawing shows numerous soldiers from two opposing sides facing off against one another, with soldiers from the left shooting arrows at their rivals.

The army on the left is equipped with what appear to be long spears and flags, and the men are all shown on horseback. 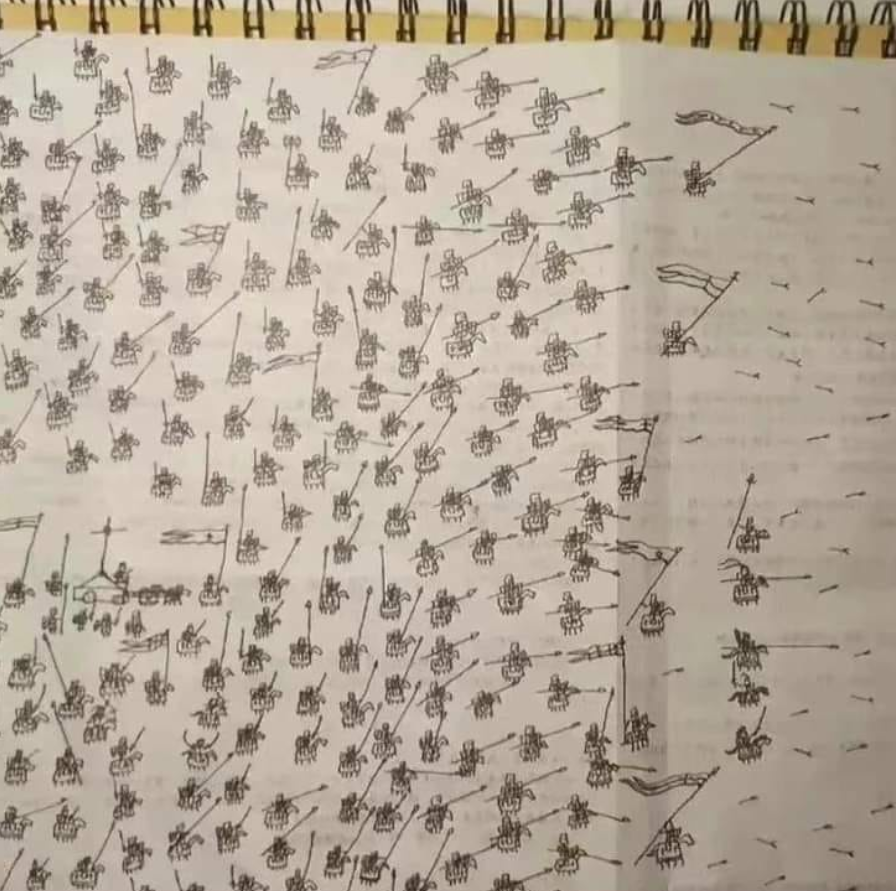 On the right, the army has a tighter, possibly defensive formation. Most of the soldiers here are on foot.

They seem to be standing their ground, with only the soldiers at the frontline holding out spears to protect their army from certain doom.

The massive scale of the battlefield brings to mind the Chinese idiom 千军万马 (qian jun wan ma), which means a thousand soldiers and ten thousand horses.

Netizens ask parents not to suppress talent of the boy

The Mandarin caption accompanying the post reads, “My child’s exam results have been poor lately. His mother looked through his bag, and found this drawing in it.”

Many netizens asked the parents to properly foster the child’s creativity rather than forcing expectations of academic excellence on him.

One person said the boy had the potential for great things and asked the parents not to let his exams deter him from ruling the world.

Another urged his parents not to let him study anymore, as they might accidentally get in the way of him living a full life.

One commenter called the boy a genius and advised his parents to find another way to cultivate his talent as he is a special child.

The attention to detail and well-thought-out military strategy shown in the drawing led some netizens to compare the boy to a young Zhuge Liang.

One comment deduced that the boy must be a fan of the classic Chinese novel Romance of the Three Kingdoms (ROTK) and that one of its central characters, Zhuge Liang is his idol.

Another said the boy must be a military advisor and a reincarnation of Zhuge Liang.

For context, Zhuge Liang was a Chinese statesman and military strategist who lived during the Three Kingdoms period of China.

Hope the boy’s creativity can continue to flourish

While most kids doodle, you don’t see such remarkable artwork in a boy of schooling age every day.

Hopefully, the drawing and the public’s reaction will encourage his parents to nurture his creativity and let it bloom.

After all, who knows what greatness awaits in the child’s future if their talent is honed early on?