The café said that they plan to retire their older dogs soon.

Those who frequent pet cafés would be familiar with We are the Furballs (WTF), an establishment nestled on the seventh floor of Bugis+ for close to 10 years.

Unfortunately, their reputation recently took a hit when a TikTok user shared about “an upsetting experience” at the dog café.

She apparently noticed that the animals at café were not being taken care of properly, with some walking about with a limp and others with fur that was “falling out”.

WTF subsequently issued a lengthy statement clarifying that they never neglected their dogs — they attributed the observations to the animals’ old age and various medical conditions.

In her TikTok post, @jezzlez AKA Jessie, shared that dogs at WTF were allegedly in poor condition when she visited the café on 20 May.

One photo shows a dog with untrimmed nails. 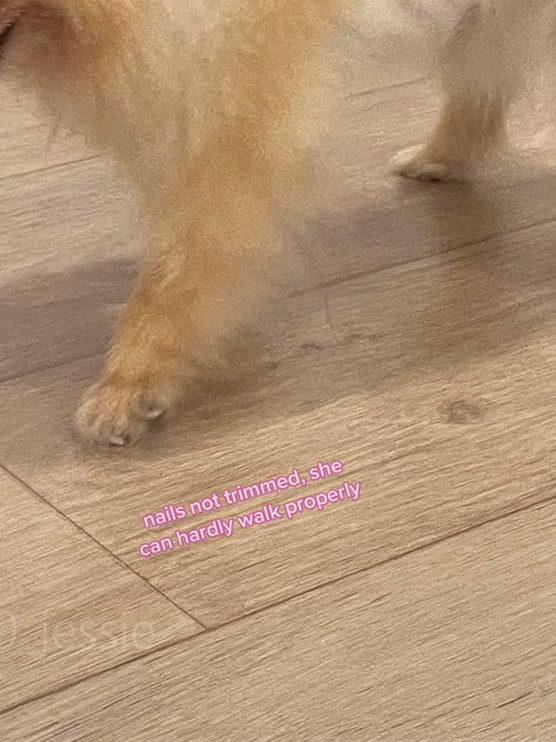 Jessie observed that this apparently made it difficult for the dog to walk.

Another dog at the café appeared to be walking around with great discomfort as well.

At the end of the clip, Jessie advised followers not to “waste [their] your time” visiting the café. 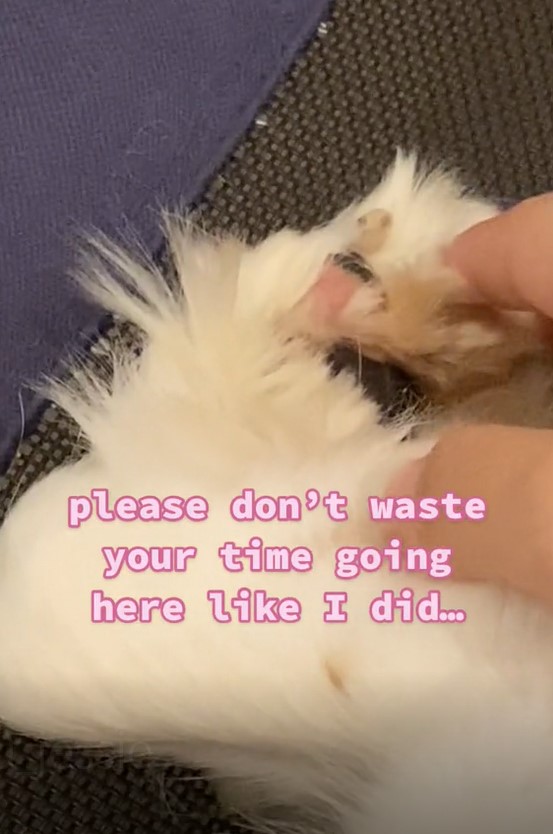 She later added more details in the comments section, saying that the dogs “have to share their bowls”.

She also claimed that they were just laying around without interacting much like what a “normal healthy dog” would do. 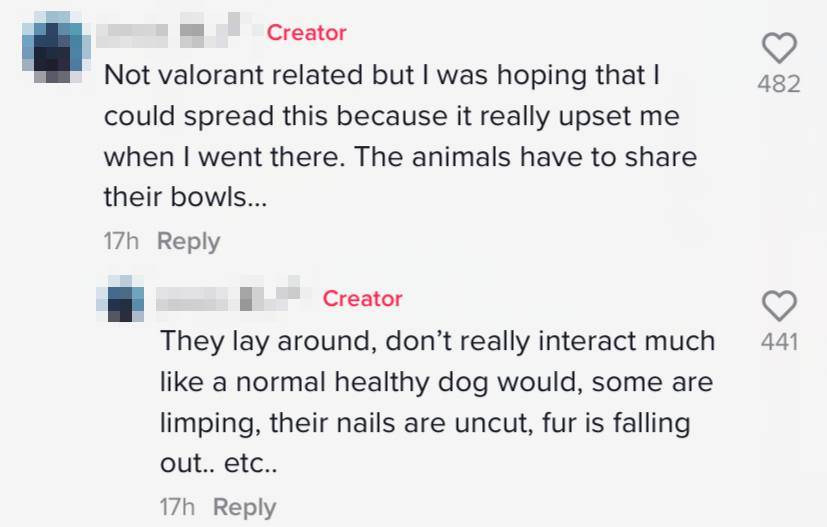 The video soon went viral with many concerned netizens chiming in on the situation.

Some pointed out that there’s no use speaking to the staff as they apparently “never do anything”. Jessie, in response, agreed and said “they don’t seem to care” about the state of their dogs. 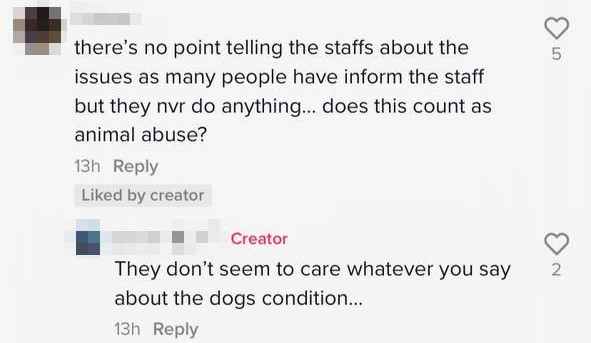 Others urged the TikTok user to lodge a complaint to SPCA.

This clip presumably led some users to leave negative feedback on WTF’s Google Maps page, even if they’ve not been to the café themselves.

One user chided WTF for “using animals for profit” without tending to “their basic needs and welfare”.

Another said their experience at the café was “not so enjoyable” after watching the dogs being “neglected”.

However, it’s unclear if the users have actually been to WTF or if they were simply referring to what they saw in Jessie’s video.

It didn’t take long for the business to catch wind of the accusations circulating online.

On Friday (27 May), WTF shared a detailed statement addressing the allegations. 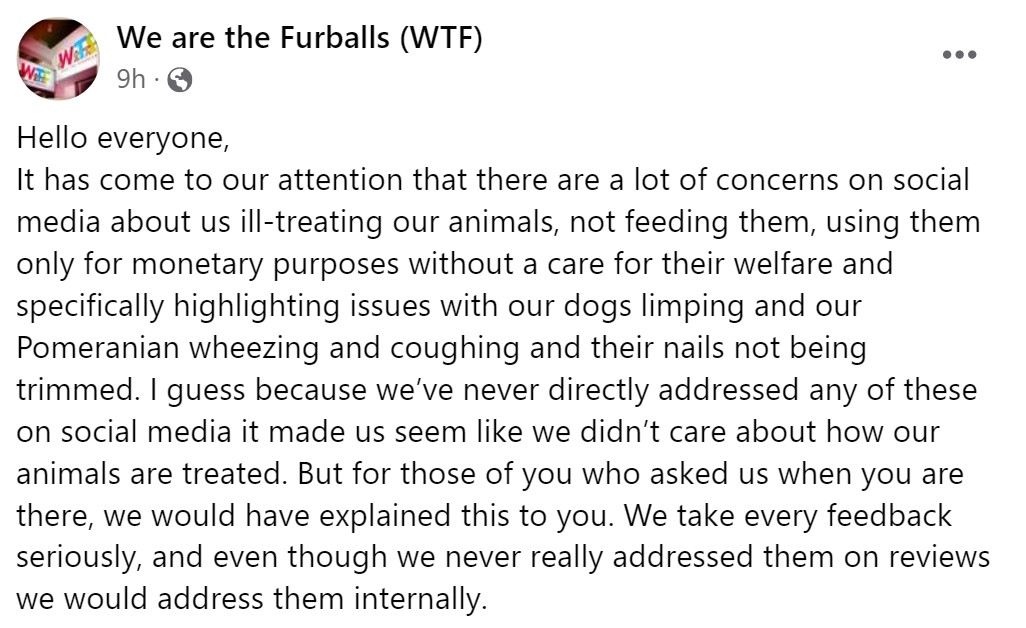 Firstly, they highlighted that three of their dogs, Bui Bui, Yuki, and Lulu are 11 years old and are suffering from several medical conditions.

WTF emphasised that they have never ignored any of the animals’ medical conditions and would always do what they can to manage their health based on their vet’s advice.

Bui Bui the French Bulldog, who was seen limping in the video, apparently has muscular atrophy due to old age. Staff at the café have been giving her supplements and will be sending her for acupuncture to improve her condition. 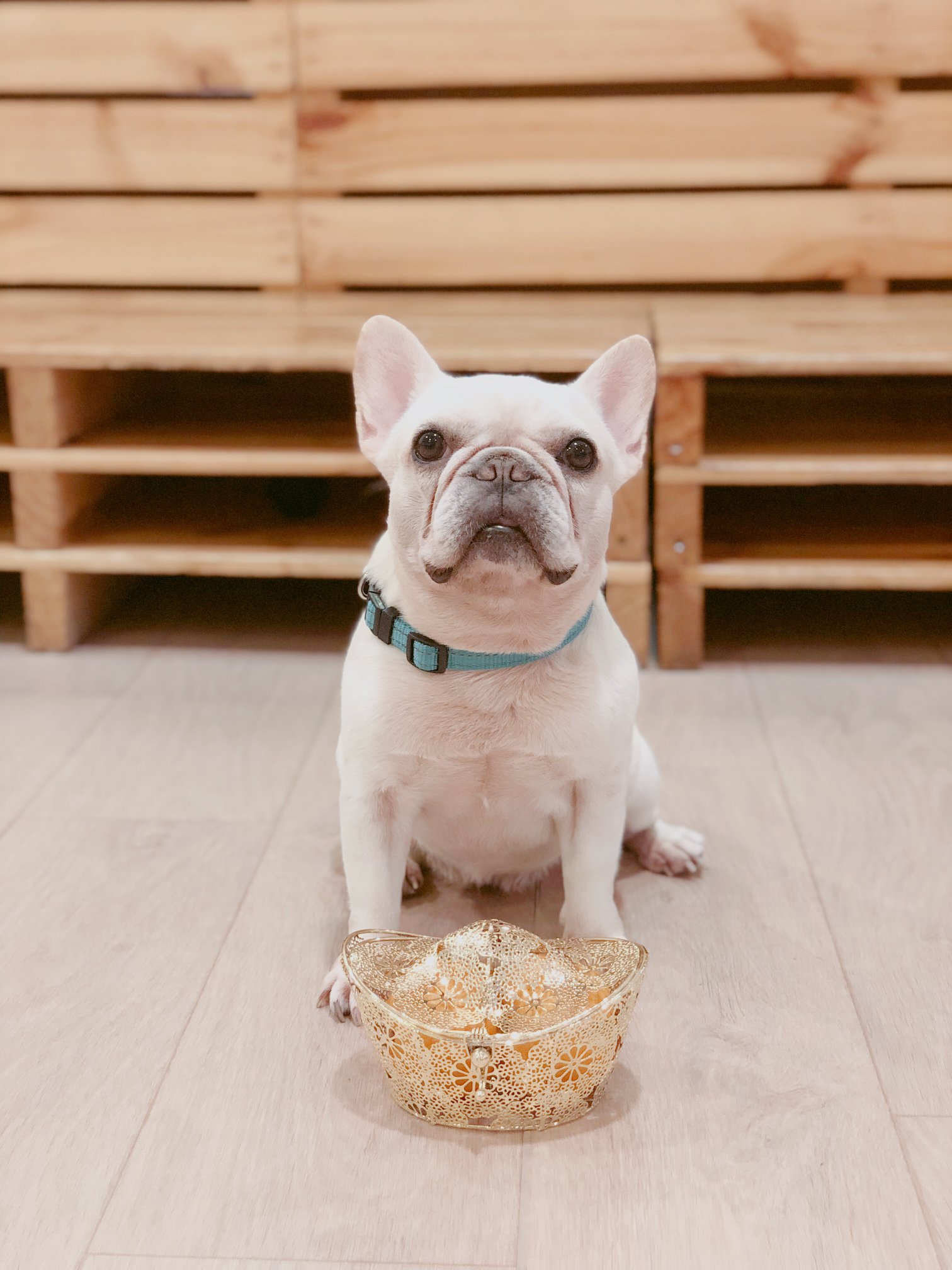 Yuki the Pomeranian, who was seen having untrimmed nails, reportedly suffers from mild heart murmur. WTF said that she despises getting her nails clipped and gets “very agitated” when they try to do so. 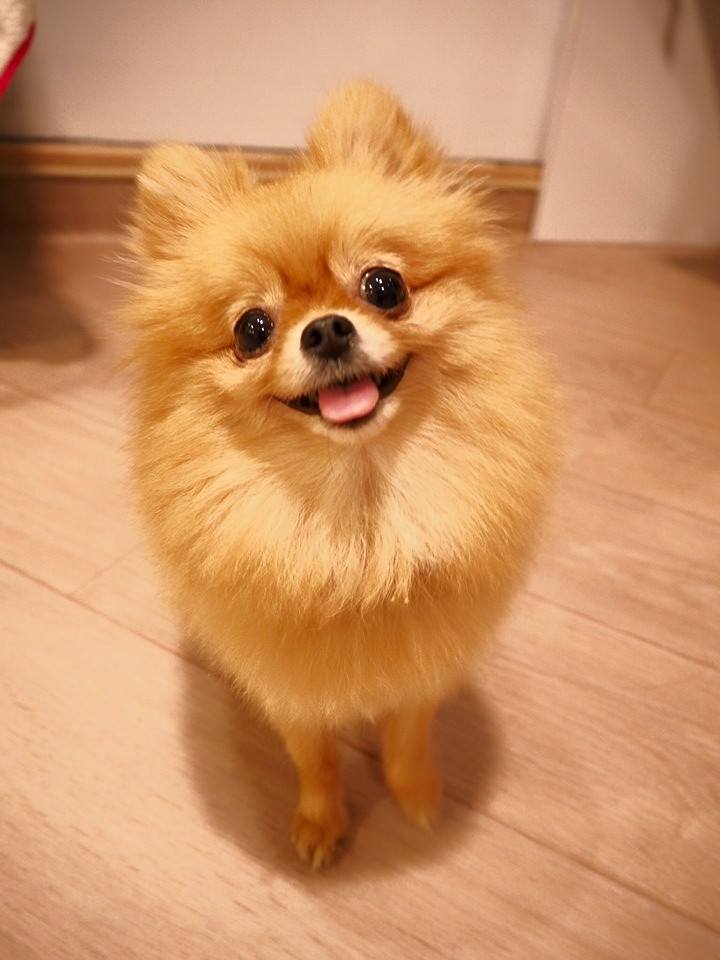 She also has a loose kneecap which vets have advised against operating on as the procedure could “end up doing more damage than good” due to her “tiny” bones. This apparently explains why she can’t “walk properly”.

Another dog, Lulu the Toy Poodle, has a very sensitive stomach and suffers from allergies. She is currently under medication too. 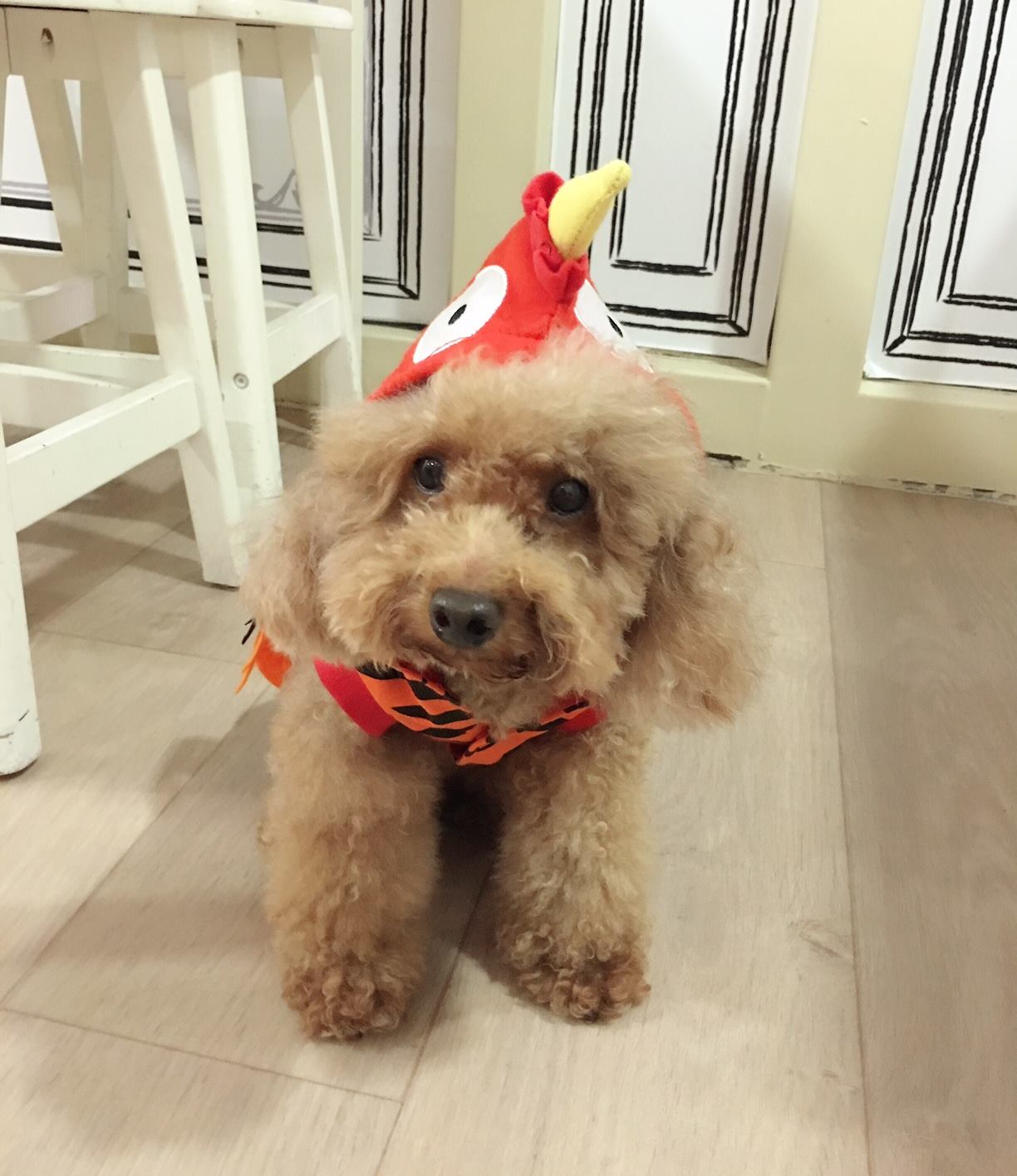 WTF also revealed that, since the start of this year, they have been making plans to retire Bui Bui, Lulu, and Yuki due to their fluctuating health conditions.

It’s unfortunate that we have to announce their retirement in such a way now.

They will start by limiting the pooches’ interaction hours with guests and, depending on their health, see if they can retire them by the end of the year.

The café then addressed the allegations about them not feeding the dogs and only providing three water bowls.

They stressed that they have “done a lot of research” and “put in a lot of effort and thought” into preparing the dogs’ daily meals, which consist of veggies, meat, fruits, and supplements.

As for the limited water bowls, WTF assured everyone that they are refilled throughout the day and washed thoroughly. They also said that it’s very unlikely that all the canines would get thirsty at the same time resulting in them fighting for the bowls.

Do not jump to conclusions

It is understandable for animal lovers to feel distressed after seeing the dogs in supposedly poor health conditions.

However, this incident serves as a reminder for everyone not to jump to conclusions without hearing from all parties involved.

We’re glad that the pet café clarified matters and hope the doggos will fur-ever be in good hands, even after their retirement.

Featured image adapted from @jezzlez on TikTok and Mitsueki Ademaro on Facebook.