One of them was seen wiping blood off his head.

UPDATE (30 Jun, 9.20am): A 50-year-old man has been arrested for voluntarily causing hurt during the incident.

The other man, a 75-year-old was conveyed to a hospital after the fight and required stitches.

There has been an unnerving spate of fights between the elderly in recent times and passers-by have not failed to capture them for posterity.

Although these fights usually stop after a few swings, a brawl involving some elderly uncles near the market at Block 112 Bukit Merah seemed to last quite a while and even turned bloody.

After one of the uncles started bleeding, a passer-by jumped on his attacker and pinned him down.

Police later arrived at the scene, equipped in riot gear, to arrest the attacker.

On Wednesday (29 Jun), footage of the brawl at Block 112 Bukit Merah went viral on Facebook, garnering over 1,000 shares within hours of posting.

One of the videos starts with a man dressed in black charging toward another man in white with what appeared to be an object in his hand.

Defending himself from the incoming blow, the man in white held a plastic chair up, supposedly to shield his face from a potential attack.

However, the man in black was determined to land a blow on the man, reaching around the chair to take a swing.

Although it may be hard to see, their confrontation seemed to have resulted in one of them toppling to the ground.

Passers-by then started to gather around the fallen pair, watching the scene with interest.

As the seconds ticked by, a few helpful onlookers ushered the man in white away from the scene and sat him on a chair nearby.

Though the victim looked relatively okay, blood was seen on his hands as he wiped the back of his head.

While this was happening, a group of uncles created a barricade made of chairs around the attacker.

Among the eight uncles, a few of them even pressed the man down with their feet.

In the same post, another video shows police arriving at the scene.

Replacing the uncles in the huddle, the police equipped in riot gear slowly got into position to arrest the attacker.

Meanwhile, the uncles helped clear the immediate area of the chairs.

The clip ends with the police ordering onlookers to move aside. 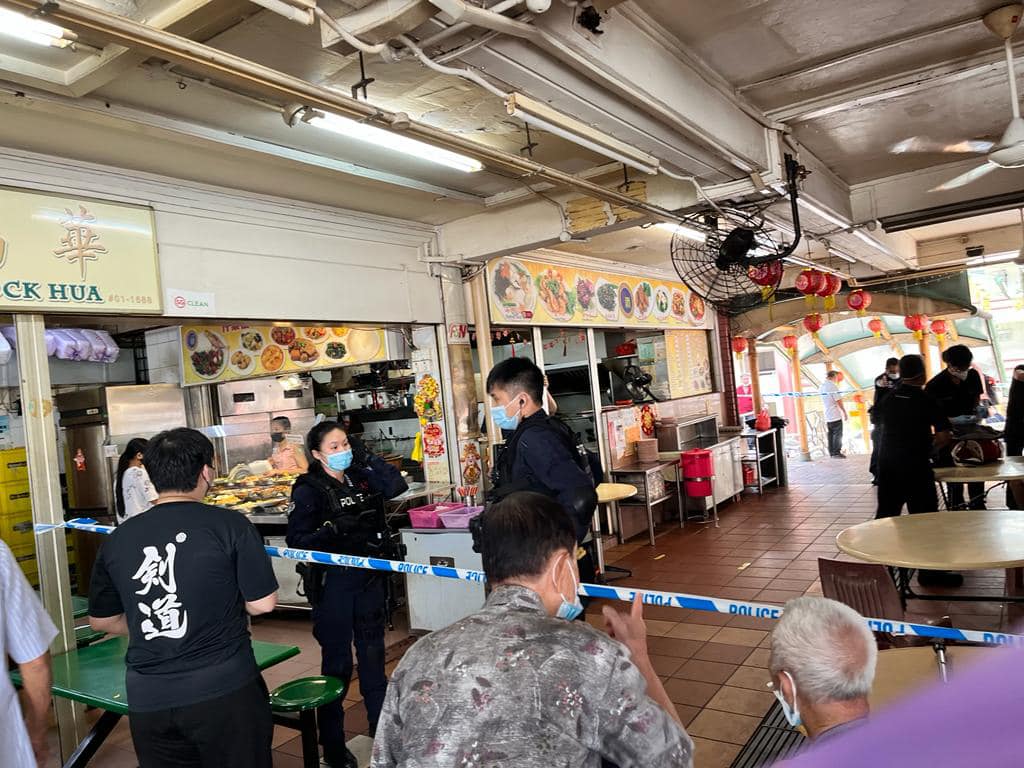 MS News has reached out to the Singapore Police Force for comments.

Kopitiams are places for meals, not fights

Coffee shops are places where people gather to have a meal. So we can only imagine the patrons’ horror when violence erupted.

Thankfully, the officers in blue arrived in the nick of time to stop the chaos, otherwise things could’ve turned out a lot worse.

Hopefully, more information regarding this incident will come to light as police investigations continue.