S’pore Café Allegedly Turned Family Away Without Asking To Wait, Apologises For Misunderstanding Cafe said table was offered to them before other customers.

As Singapore is a multiracial country, we have learnt to live harmoniously with one another and respect different races and cultures.

Therefore when an incident which allegedly involves discrimination happens, it is a call for concern.

A man took to Facebook to share how he felt ‘discriminated’ against when he visited a café at Serangoon Road. 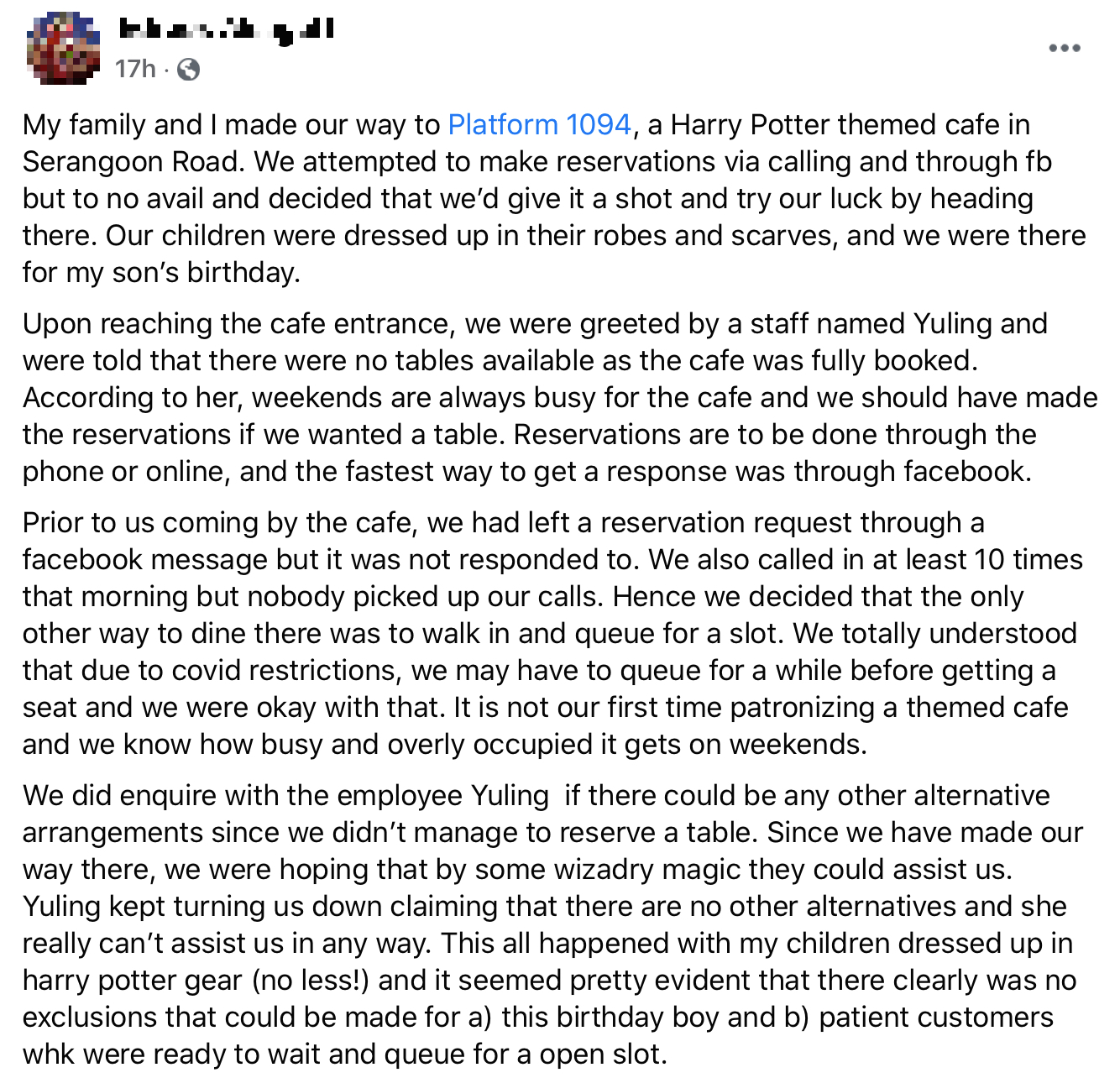 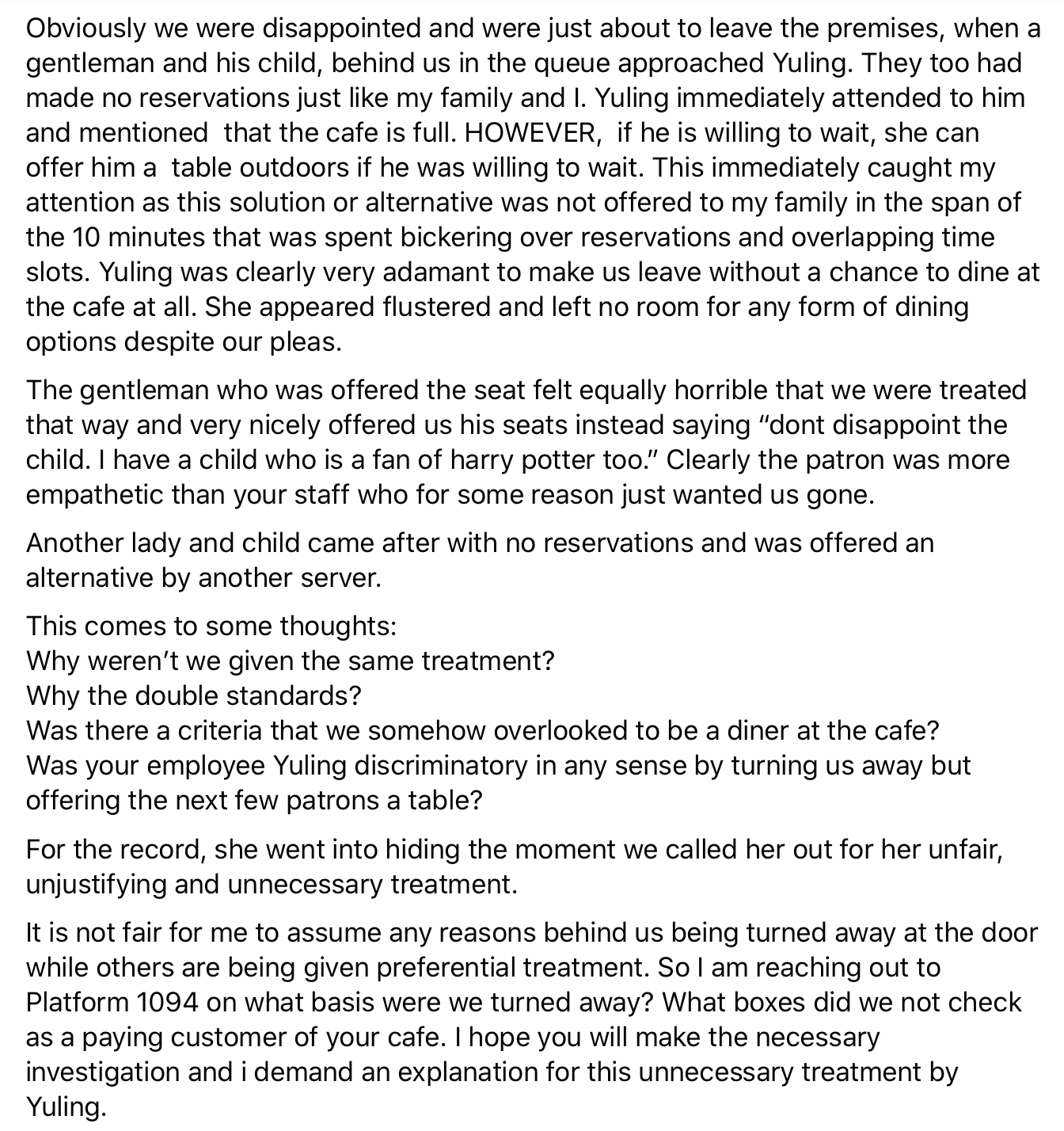 He alleged that he was turned away when all tables were occupied. However, he purported that when 2 customers behind him were offered a table if they were willing to wait.

This prompted the man to question whether the staff’s customer service was motivated by discrimination. The café has since apologised for the incident.

Café staff allegedly turned family away as place was full

In a Facebook post on Sun (1 Nov), a man shared that he brought his family down to the café Platform 1094 on Serangoon Road to celebrate his son’s birthday. According to him, he tried to make a reservation about 10 times through the phone but to no avail. He then left a booking request on their Facebook page but did not receive a response.

Eventually, he and his family decided to go down and queue up for a table instead.

When he arrived, a staff told them at the door that the café was fully booked for the day and if they did not make a reservation, they would not be able to get a table.

The man replied that they were okay with waiting if an alternative seating – like an outdoor table – became available. But he alleged that Yuling insisted that they will not be able to dine there as the whole day was booked.

Customers behind allegedly given tables if they waited

After attending to the man and his family, the staff served the customer behind and asked if he had made a reservation.

When he said that he didn’t as well, she allegedly told that customer that if he waited for a table to free up, he could dine there.

The man then claimed that when another lady without a reservation came forward, she was given a table as one just happened to be available at that time.

Unsure about what just transpired, the man asked to speak to a manager. That’s when another server quickly offered him the option of a table too if one freed up.

Man asked if it was discrimination

In response to this incident, the man plainly asks if what he and his family experienced was a case of discrimination.

This was because he couldn’t figure out any other reason why the staff was allegedly so insistent that they leave, while other customers who did not make reservations were told to wait.

Speaking to MS News on Mon (2 Nov), Platform 1094 said it takes all racial discrimination seriously as they are a multiracial company.

Below is their statement published in full.

The company takes all racial discrimination seriously as we are a multi-racial company. We have since conducted our internal investigation. The facts are as follows:

[The customer] and family came by Platform 1094 on 1 Nov, requesting for a table without
reservation. All tables were either taken up or reserved and there was no seats available.

The family continued to insist to have a table. At this juncture, the customers queueing
behind asked if they can queue for an outdoor table. No table was offered to the customers
behind the family but was placed in queue. However, the family mistaken that a table was
given to them at this point and got very angry.

A table was subsequently available and was offered to [the customer] and family by both our staff and the customer behind them. Note that the customers behind were Chinese and not white as mention by some media. They rejected the table and threatened to bring this online.

It was an unfortunate event where communication error between our staff and the customer turned into a situation of racism in the eye of the customer. We would like to apologize on this end and will continuously train to ensure better communication by our staff in future.

We would also like to highlight that the company has been receiving hate speech and vulgarity towards our staff. We will not tolerate any abuse and will be making a police report if the situation gets worse.

Simple miscommunication can lead to a misunderstanding

The frustration that the man must have felt when they were turned away may have dampened the mood of his son’s birthday.

However, we are glad that the café has taken responsibility for this incident and assured they will work on communication between staff and customers.

We hope the café and customer could eventually settle the misunderstanding on amicable terms.