We hope she receives the treatment she needs.

A parent’s love knows no bounds. Most parents would do anything for their child, especially when it comes to their health.

On Saturday (1 Feb), a Chinese mother literally spent hours begging the police to help save her daughter’s life.

Lu Yuejin, 50, negotiated with the police at a Hubei checkpoint for hours to let her daughter pass so she could get treatment for her leukaemia.

Unable to receive treatment at the crowded hospitals in Wuhan, her desperate pleas were truly heartbreaking.

Not allowed to pass checkpoint due to lockdown

Picture a long and empty road in a city where many have been forced to stay indoors due to a viral outbreak.

Nobody drives in or out, save for a few who attempt to cross the border for various reasons. This was the scene at the checkpoint on the bridge crossing the Yangtze river.

Ms Lu, a farmer from Hubei, brought her daughter, Hu Ping, 26, to cross the checkpoint as they needed to go to Jiujiang, reports Channel NewsAsia (CNA). 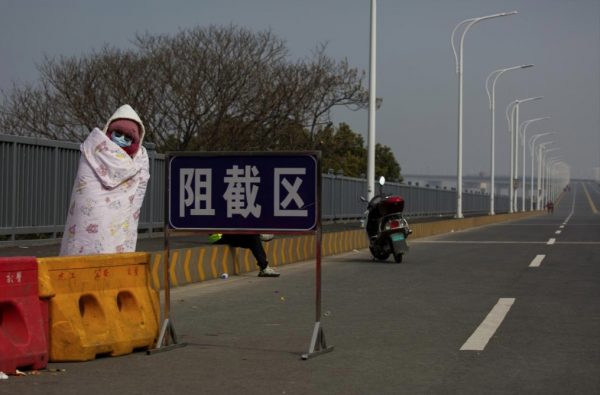 Hubei, the province with the highest concentration of deaths and confirmed cases, is basically on lockdown.

Police initially turned the pair away, but Ms Lu remained firm, pleading for hours for them to get out of the province.

Daughter unable to get cancer treatment at Wuhan hospitals

Ms Hu Ping, who was due for her second round of chemotherapy, had to find another hospital as the ones in Wuhan were busy treating coronavirus patients.

The next available hospital was in Jiujiang, outside the Hubei province.

CNA reported that Ms Hu sat on the ground with a blanket wrapped tightly around her as her mother pleaded to the police just a few meters away.

Mother just wanted for daughter to pass through

Ms Hu Ping’s mother begged the police to let her pass for hours, shedding tears as she implored.

She told the police,

Please, take my daughter. I don’t need to go past… please, just let my daughter go past.

Reuters spoke to her, inquiring about her predicament. She said,

All I want to do is save her life.

A loudspeaker playing a message informing residents that they couldn’t enter Jiujiang almost drowned out her voice.

Police eventually let them through

It seemed like all hope was lost until about an hour later.

The police eventually made some calls and arranged for an ambulance to pick both mother and daughter up and transport them across the checkpoint.

Whether Ms Hu Ping successfully received treatment in Jiujiang is unclear, but at least she managed to get there.

With many hospitals having to prioritise Wuhan virus patients, the lack of attention for other patients becomes an inevitable consequence.

Our hearts go out to all the Chinese medical professionals and civil servants working hard to keep their cities and country safe.

We hope the situation gets under control soon, so people like Ms Hu won’t be deprived of their healthcare needs.