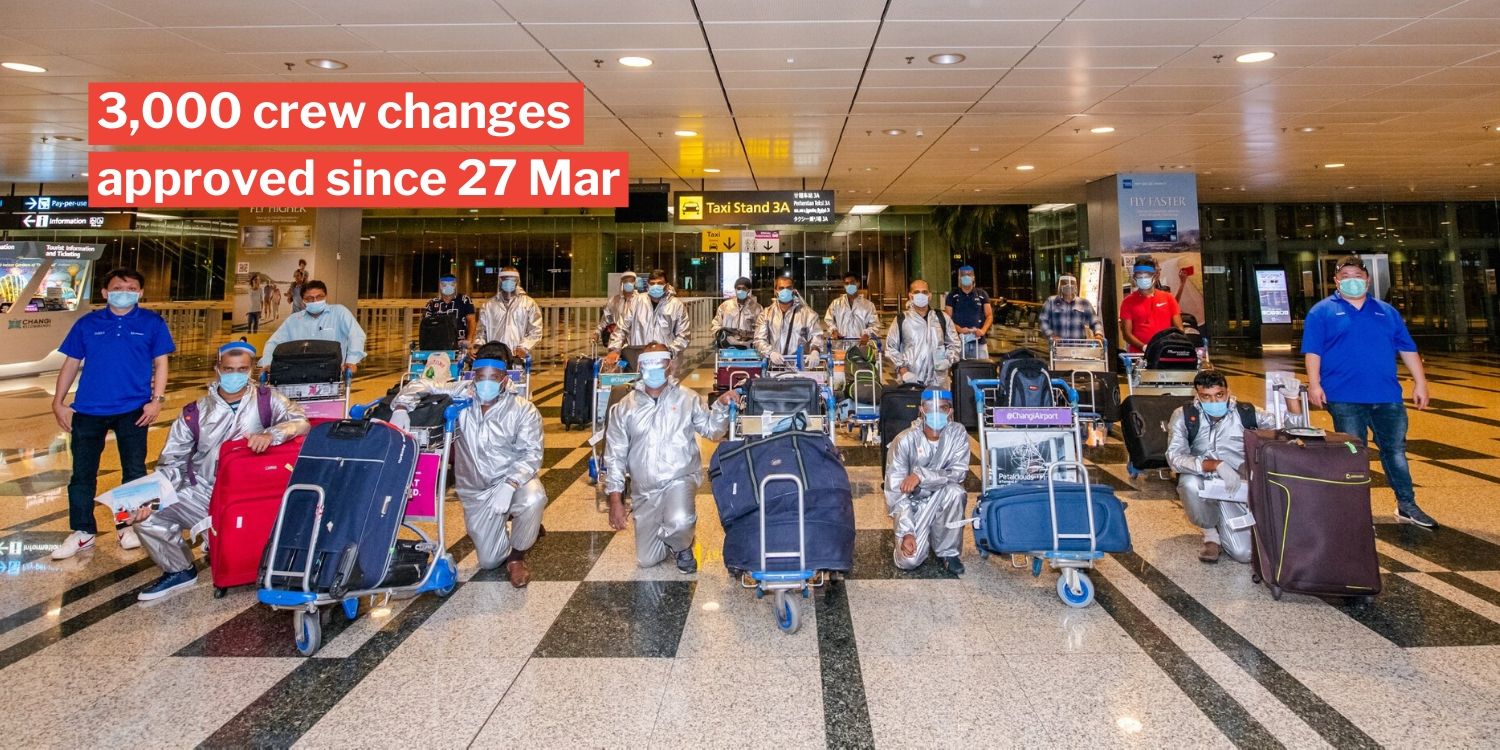 Some may be fretting that their overseas holiday plans have been scuttled due to the Covid-19 pandemic that has prompted countries to ban arrivals and airlines to cancel flights.

But let’s not forget that travel restrictions are taking an even tougher toll on some people. Those who work on ships are one such group that’s affected.

Stuck at sea when the pandemic erupted, many were unable to disembark to go home to see their loved ones due to travel restrictions. Thus, many of them have exceeded the time that they are supposed to be at sea, as stipulated by their contracts. 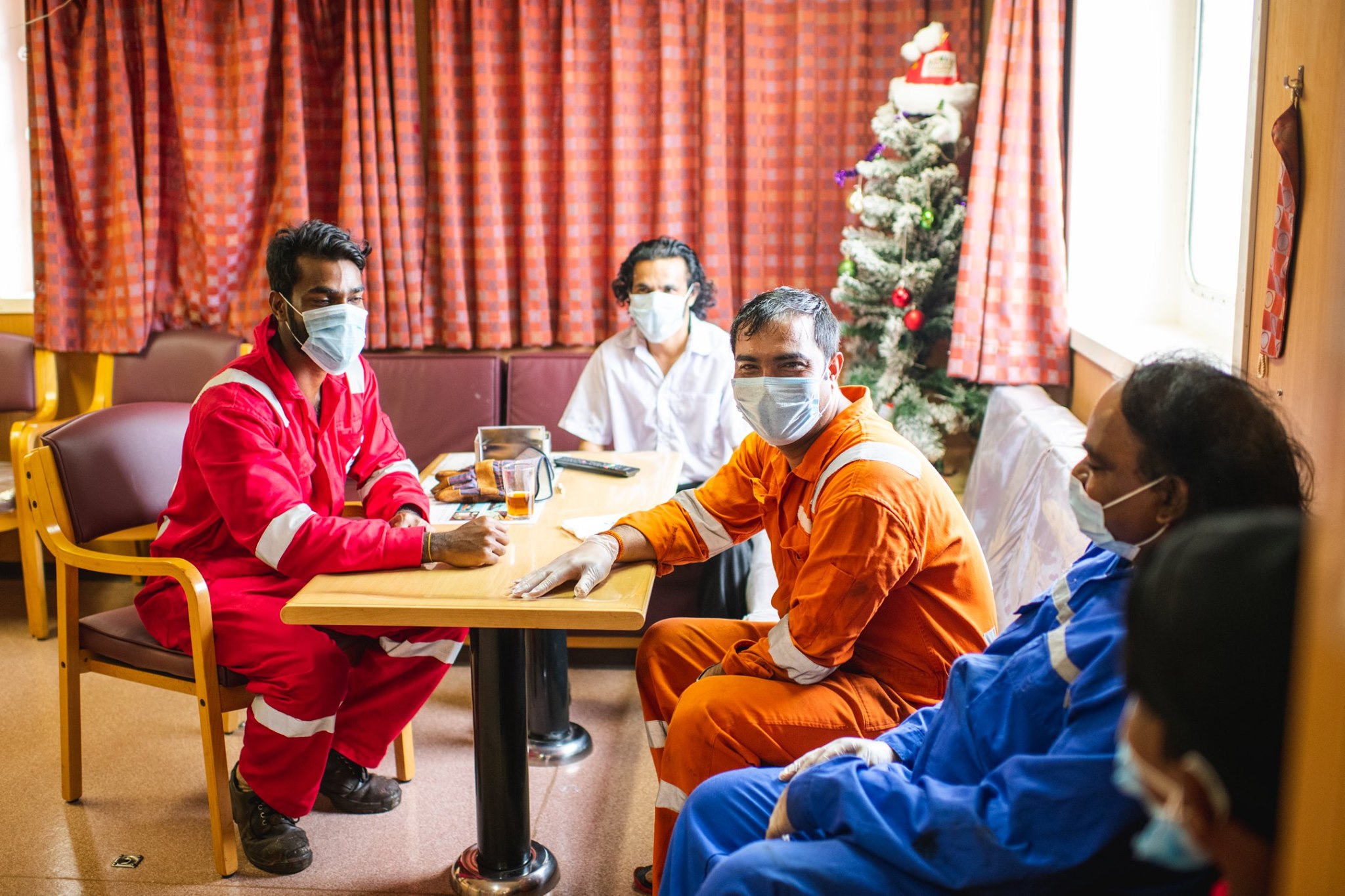 Recognising the importance of maritime transport, Singapore is working tirelessly to help commercial vessels change their crew, thereby bringing in fresh crew members and allowing crew members who have been stuck on their ships for a long time to return home to their loved ones.

Transport Minister Khaw Boon Wan highlighted the plight of these seafarers in a Facebook post on Tuesday (9 Jun), saying Singapore is cognizant of the issue. 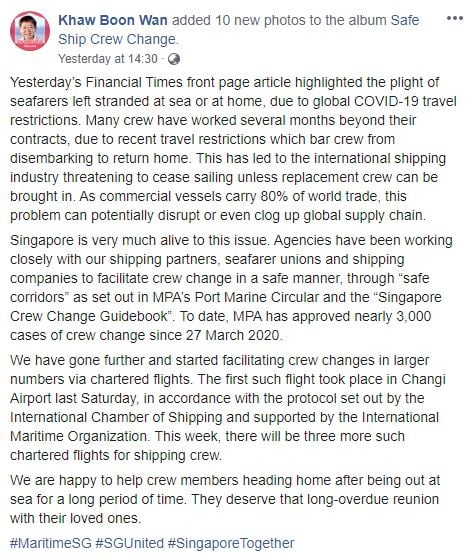 He cited a recent article by the Financial Times, which said that commercial vessels – like container ships, fuel tankers and dry bulk carriers – carry 80% of world trade by volume.

Thus the potential halting of the international shipping industry, due to crew who have overshot their contracted hours, will threaten the global supply chain. 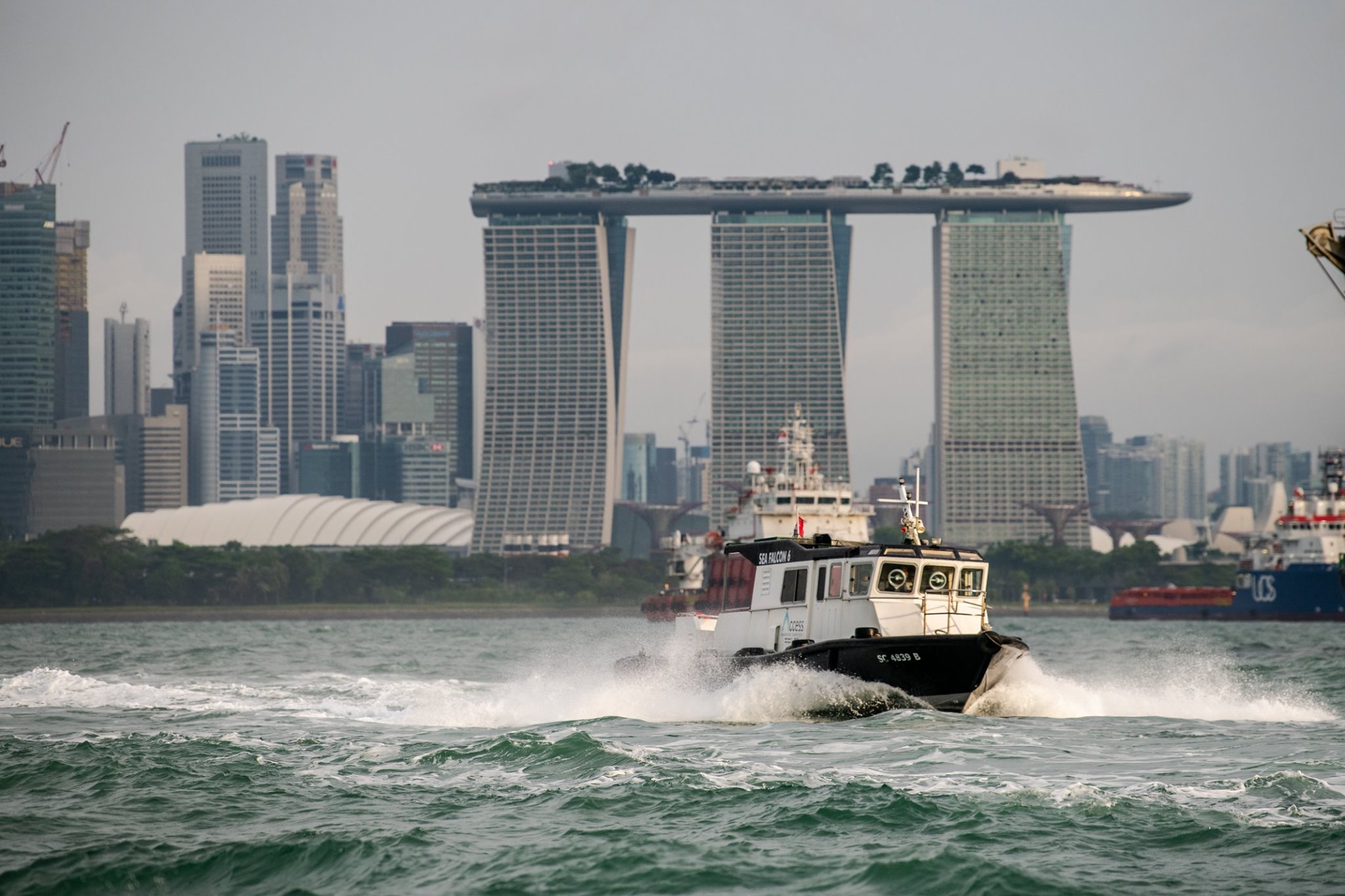 Singapore has put much effort into keeping international shipping going.

As in an indication of that, the Maritime and Port Authority of Singapore has approved nearly 3,000 crew changes since 27 Mar.

These crew changes were performed in a safe manner in collaboration with shipping partners, seafarer unions and shipping companies.

A group of 11 men, who arrived on a commercial flight from Amsterdam and were transferred to three different vessels, are just some of the crew members involved so far.

According to Mr Khaw, arriving crew members are quarantined at home for 14 days and then tested for Covid-19 in their home countries before flying to Singapore.

Upon arrival at Changi Airport, their temperatures are taken. 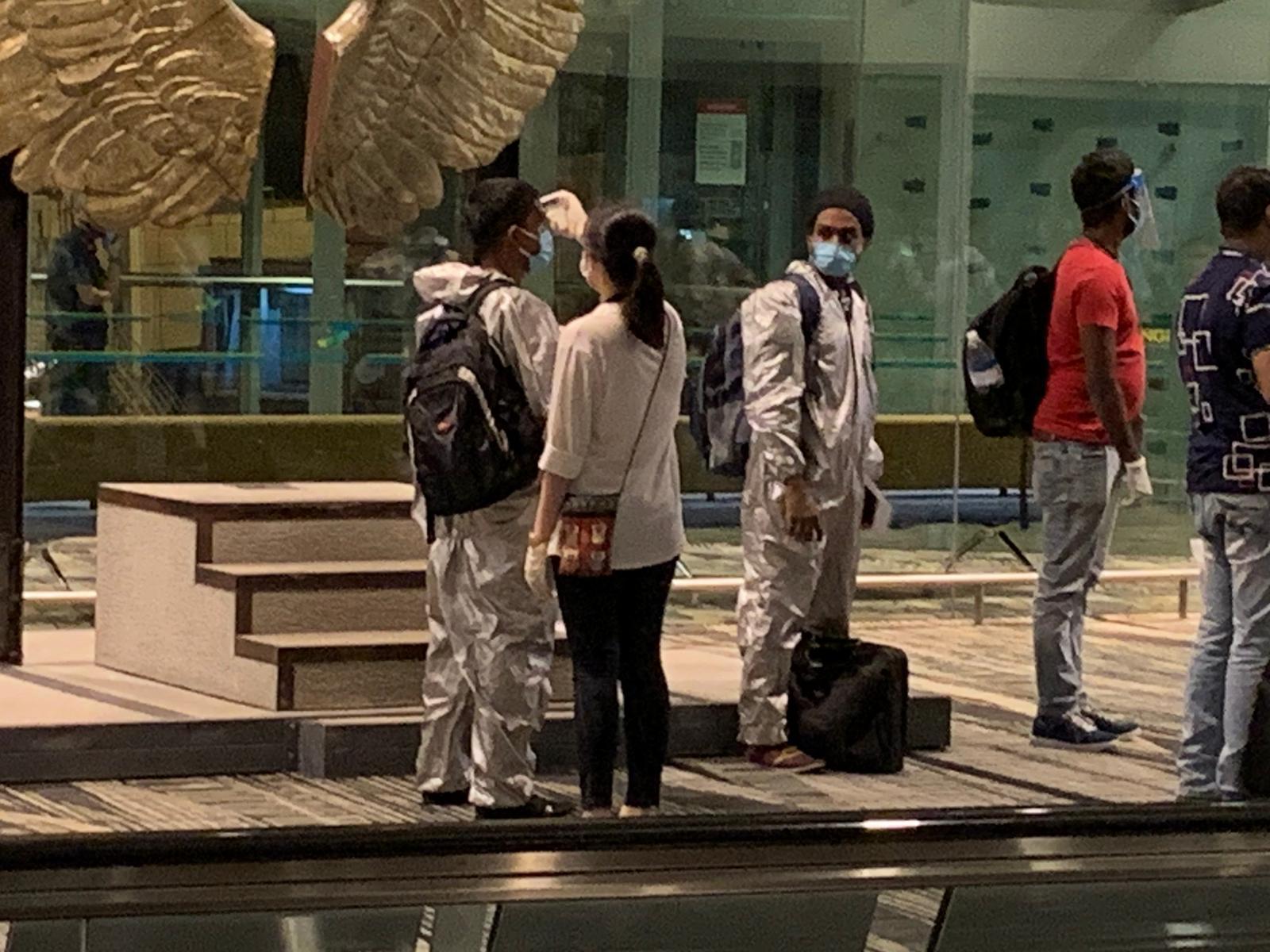 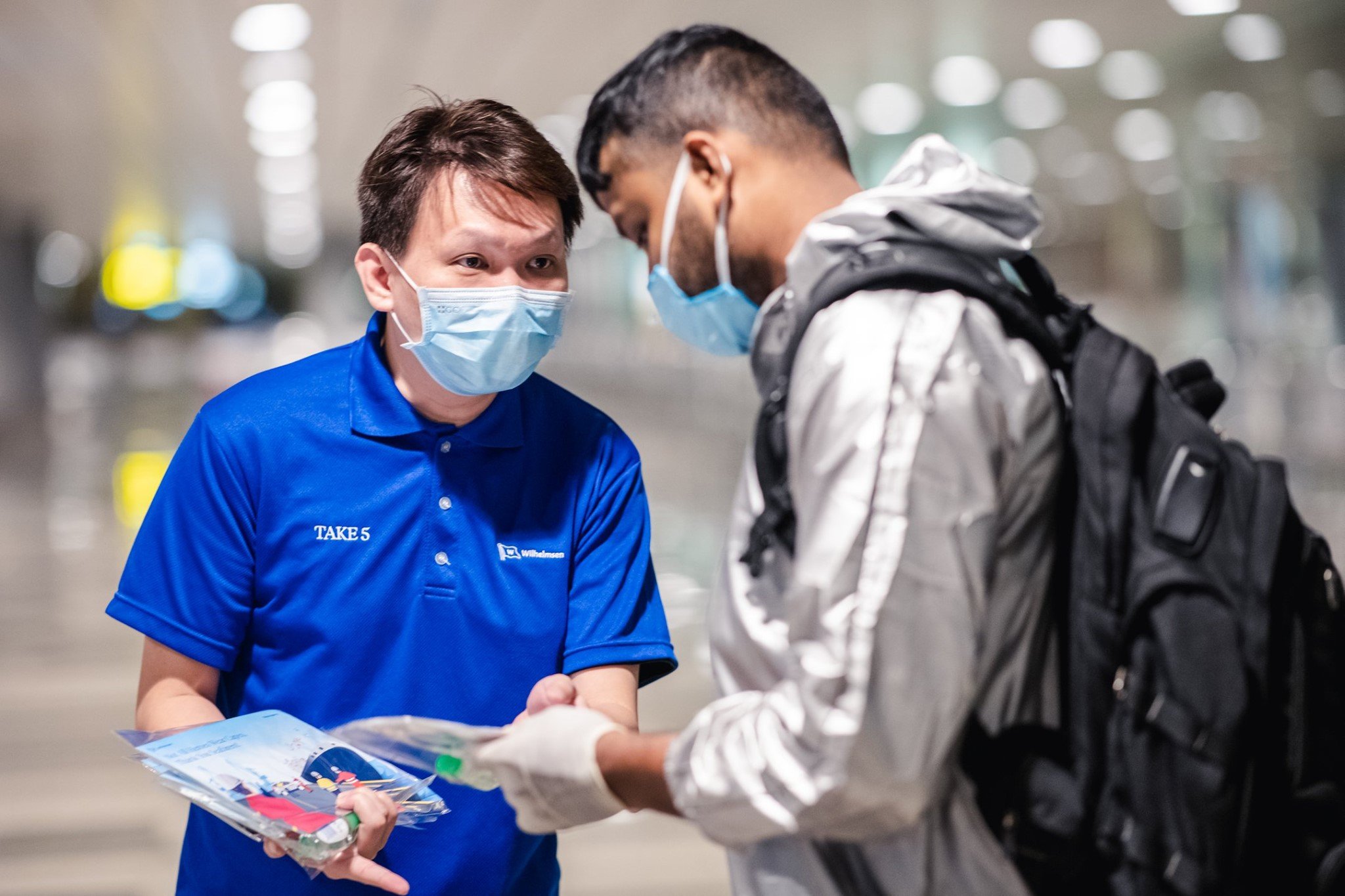 Check out the welcoming words for the seafaring heroes, who endanger their lives and are separated from their families in order to do the essential work of keeping ports open and cargoes going. 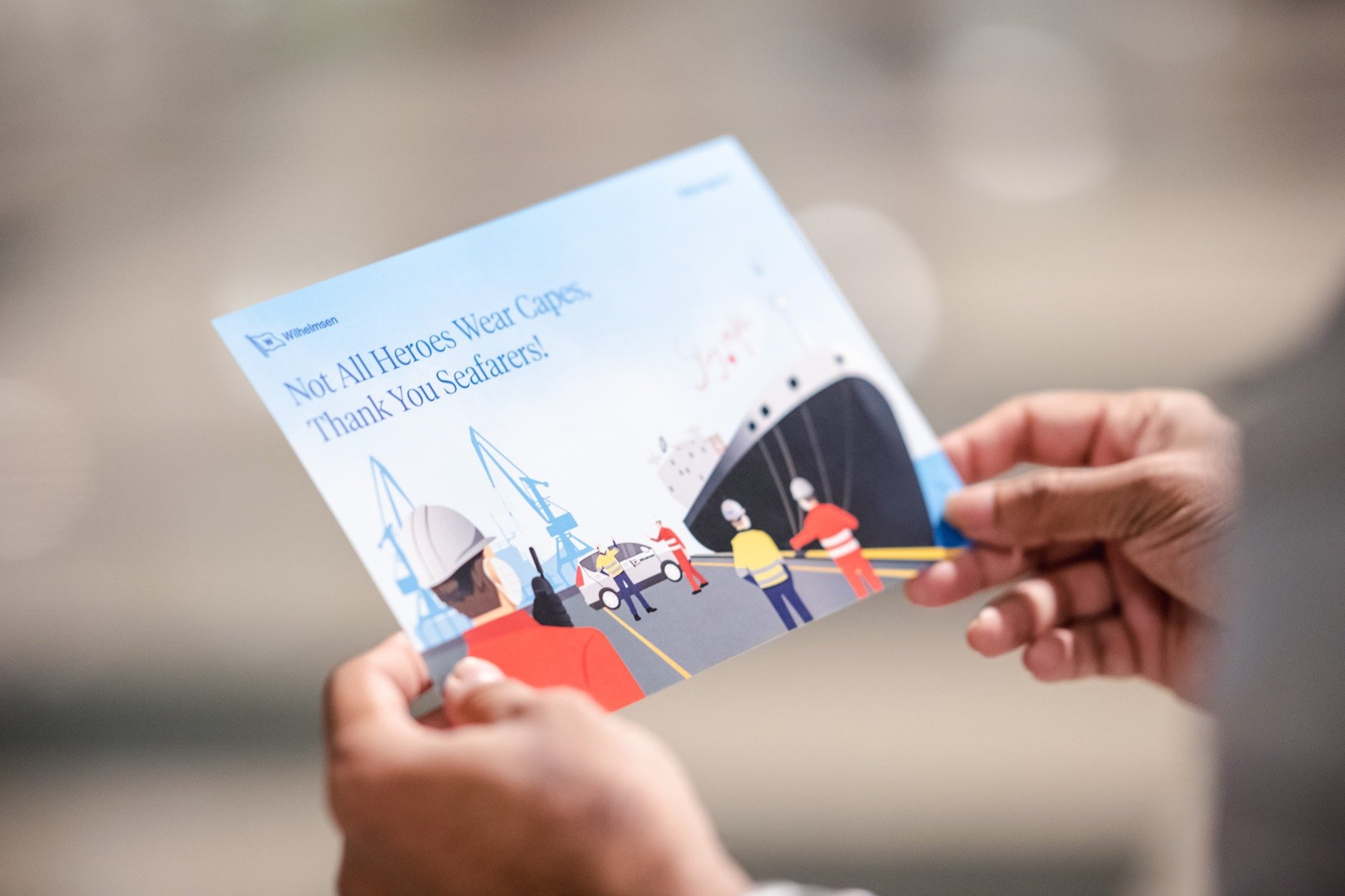 Wearing personal protective gear, the crew members are then transported to their vessels via private transport to relieve the existing crew. To increase the number of crew members that can be changed, Singapore has recently gone a step further, by chartering flights.

These seafarers, for example, arrived in Changi Airport on 6 Jun by a chartered flight, which allowed them to relieve the crew on the bulk carrier Genco Liberty.

Helping seafarers return home to their loved ones

By helping to facilitate the safe transfer of crew members to ships, Singapore isn’t just freeing up global supply chains.

It’s also helping crew members who have been out at sea, for longer than they had expected to be, return home to reunite with their loved ones, a task that Mr Khaw said Singapore is happy to perform.

We wish all seafarers a safe journey, whether they’re heading to sea or home at last. You guys are the heroes that help keep the world going in difficult times.