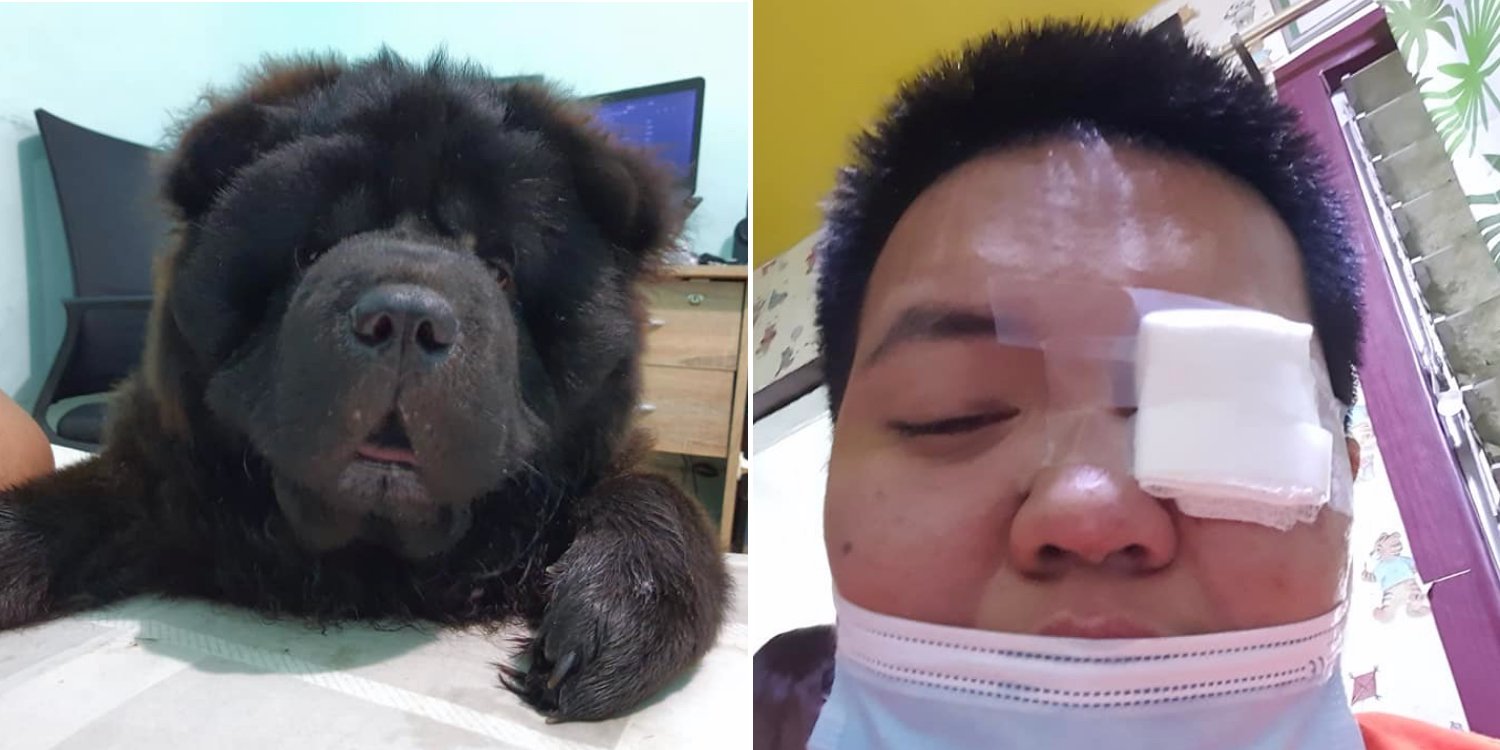 They say dogs are man’s best friend, and not for no reason — they loyally stick by their owner and are with them through their best and worst moments.

Animals have emotions just like us and pet owners may be able to testify to that.

A dog accidentally scratched his owner’s cornea while asking for some attention. Later, he was afraid to show himself as he felt guilty.

However, the owner forgave him as he knew the incident was an accident. 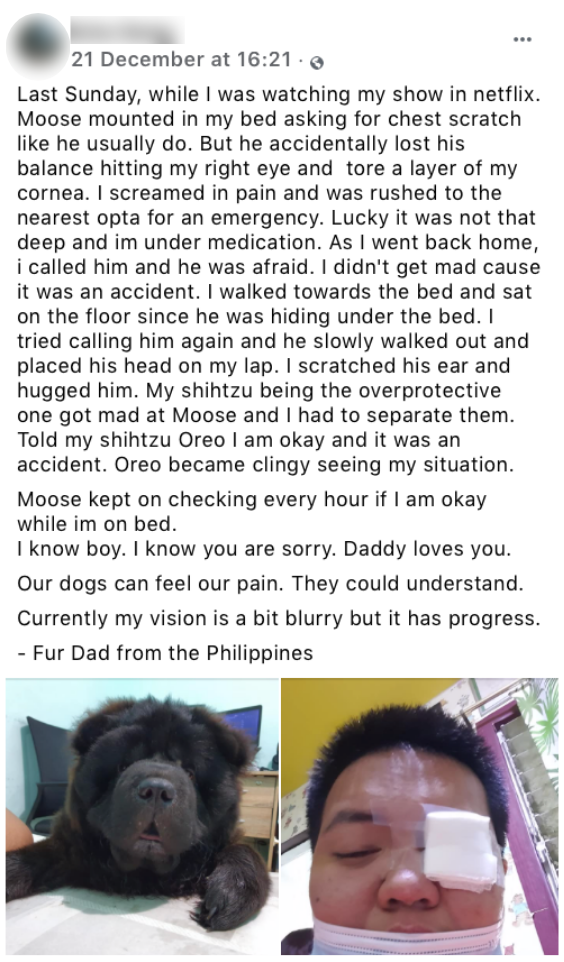 The dog was so concerned for his owner and sorry for what he’d done that he kept checking on his owner every hour.

In a post on doggo-sharing Facebook group Woofing, a man from the Philippines said he was in bed watching Netflix when his chow chow, Moose, jumped on up to ask for some attention — a chest scratch.

Unfortunately, the dog lost his balance and scratched his owner’s right eye. This tore a layer of his cornea, the man said.

The man screamed in pain and was sent to get his eye checked. 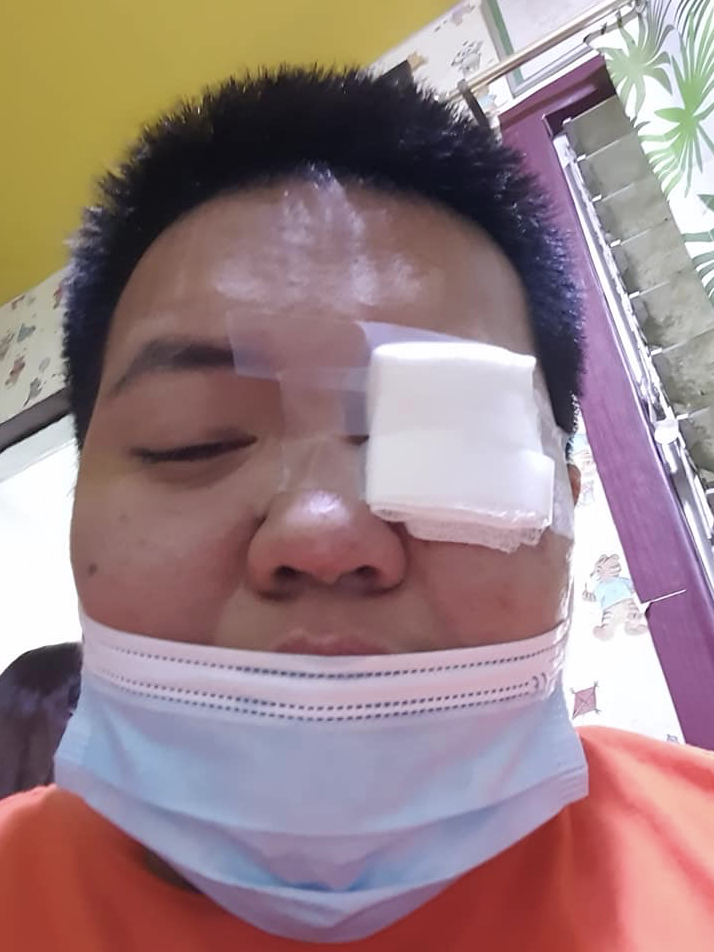 Thankfully, the cut wasn’t deep and he could go home, albeit with a bandage over his eye and medication.

Upon reaching home, the man called for Moose, who was afraid and was hiding under the bed.

However, the owner wasn’t angry at the dog as he knew the scratch was an accident. Instead, the man sat on the floor and called the dog again.

This time, Moose came out apprehensively and placed his head on the man’s lap.

To reassure Moose that he was forgiven, the owner scratched him and gave him a hug.

Checked on owner every hour

The man’s other dog, a shihtzu, is typically overprotective and got mad at Moose for what he did — both dogs ending up fighting as a result. The owner had to separate both dogs.

He also had to reassure Oreo, the shihtzu, that he was okay. Oreo ended up becoming clingy upon seeing his hooman’s situation.

Still, Moose made the effort to check on his owner every hour to make sure he’s okay. 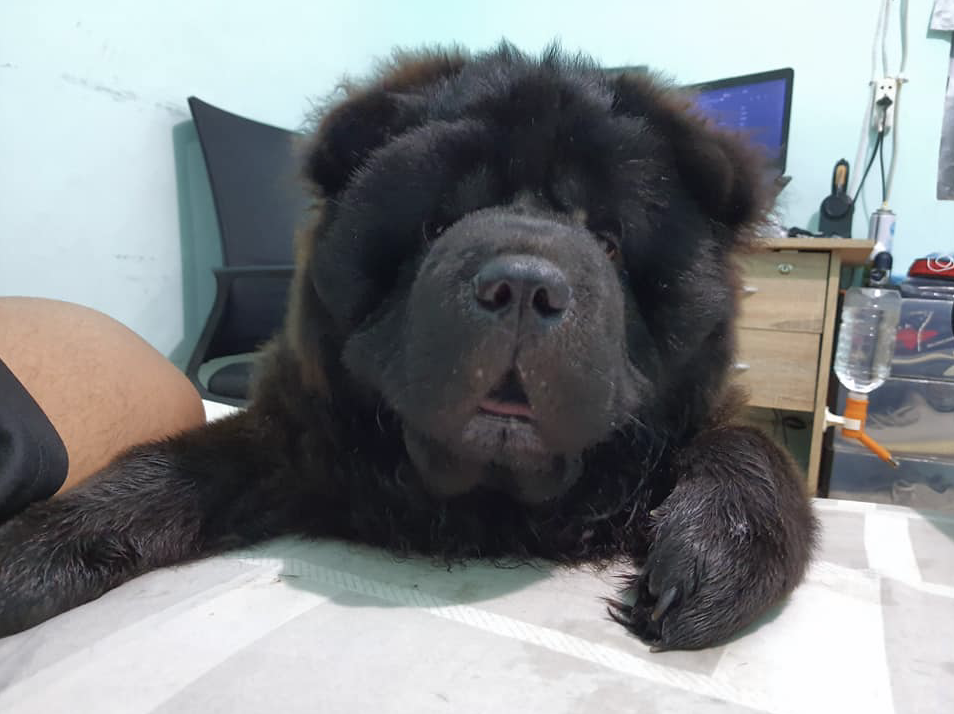 The man ended his story with the conclusion that dogs can feel their owner’s pain and understand emotions.

Dogs have feelings too

Perhaps this shows us that pets can care for their owners deeply and don’t really mean any harm for those they care about.

They’re not man’s best friend for no reason, and can feel pain, hurt, and remorse.

So next time if your dog or cat knocks over a vase or leaves a scratch for wanting to play, you may also want to be quick to forgive.