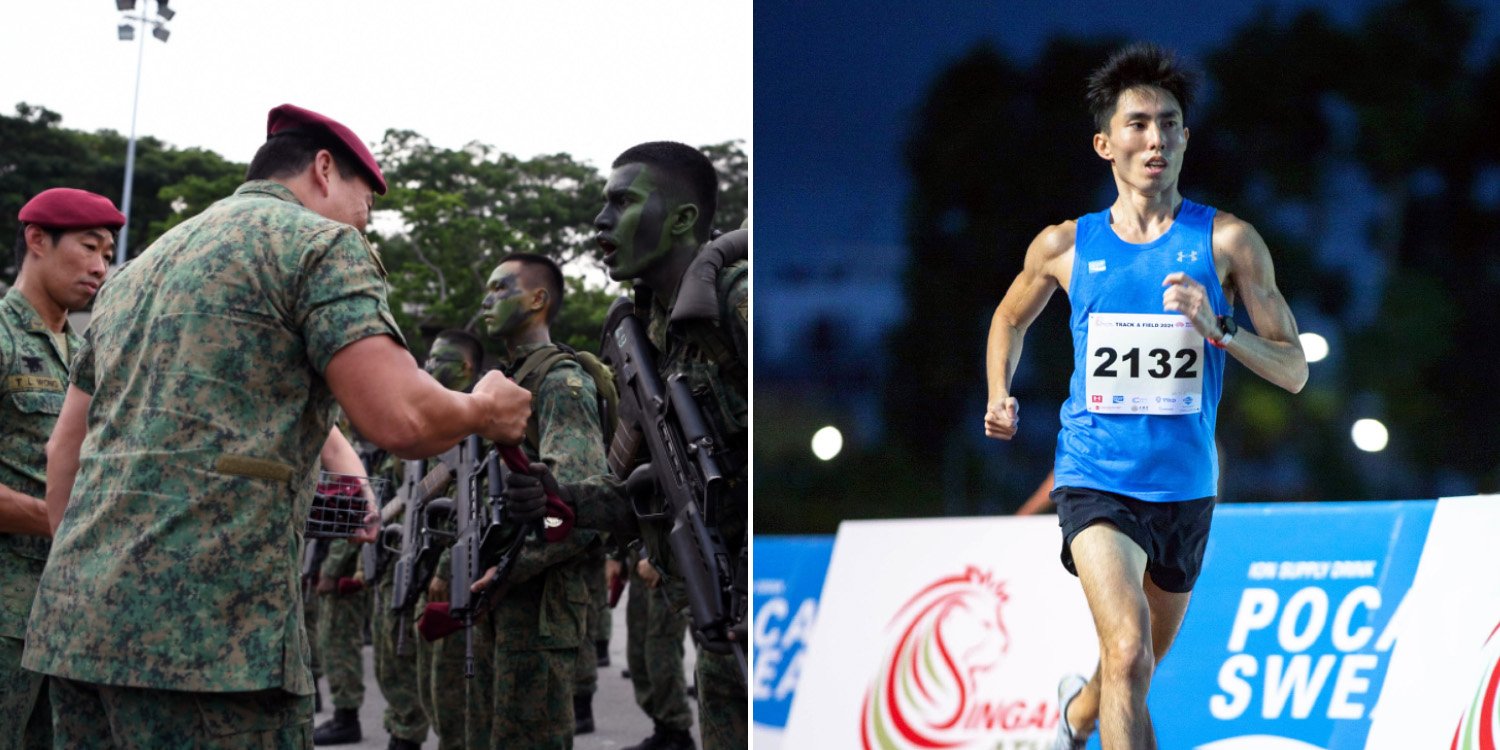 He urged other commandos to keep their cool.

The challenge was sparked when some commenters talked about commandos friends who were able to hit that timing.

As such, Soh decided to issue the challenge while at the same time noting that he respects what commandos do.

A commando and competitive runner has given his thoughts about the challenge, speaking from the perspective of a commando. 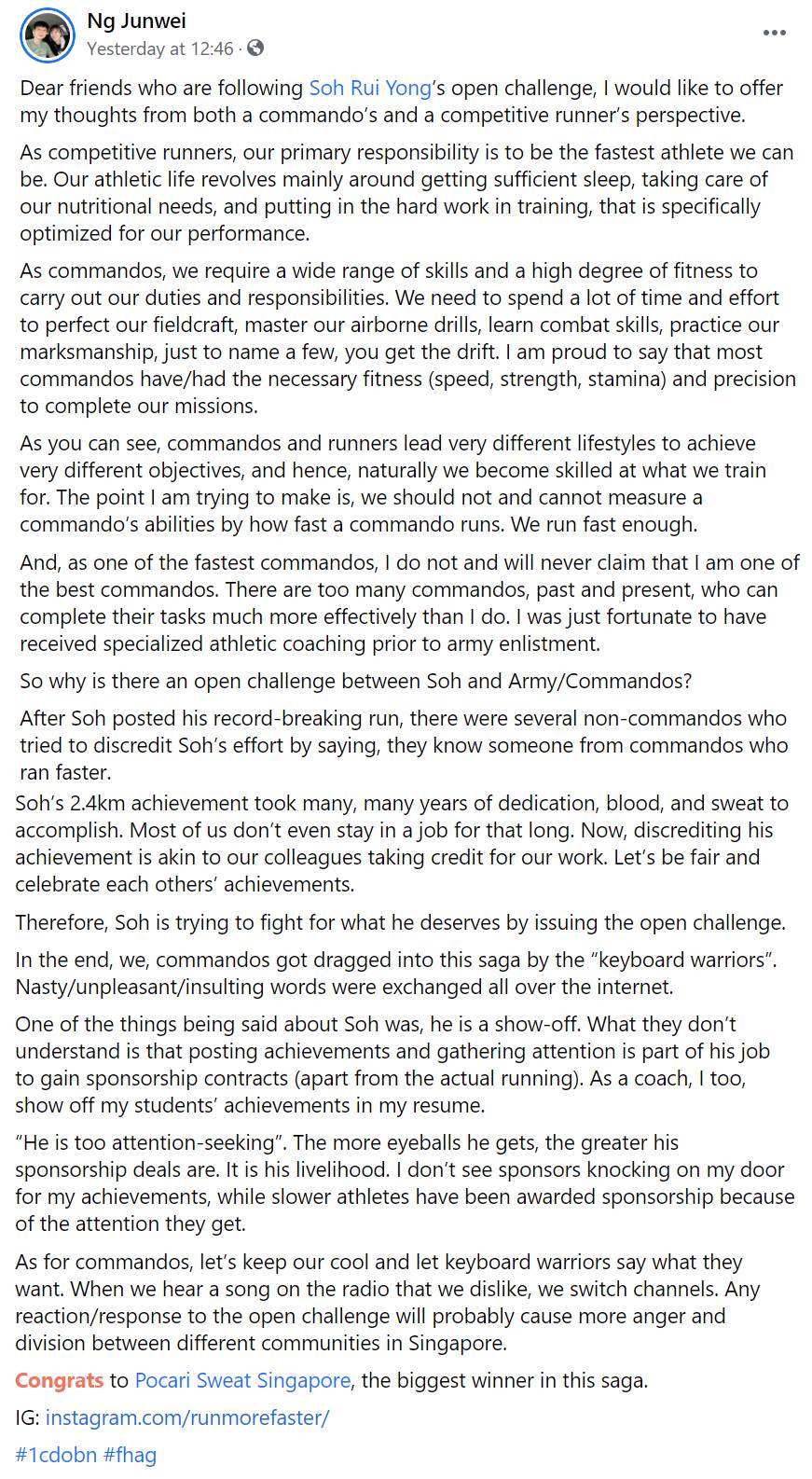 Even though he is a fast commando, he notes that they do more than just run and must keep up a high level of fitness to do what they do.

Mr Ng also defended Soh’s actions against some who’ve criticised him, saying that he is garnering attention for his sponsors.

Mr Ng Junwei is a commando and competitive runner.

He noted the differences between what a commando does and what a competitive runner does.

One aims to be the fastest they can be, while the other trains in a wide range of skills and need to be highly fit to perform their duties.

This leads to commandos and athletes leading very different lives and training for different skillsets.

A commando should not be judged by how fast he runs, Mr Ng stressed.

He also noted that even though he is one of the fastest commandos, he doesn’t dare to call himself one of the best, as there are others he considers more effective.

He said he is simply lucky to have received specialised athletic coaching before enlisting in the army.

Challenge came about because of keyboard warriors

As for why the challenge has come about, Mr Ng noted that several non-commandos tried to discredit Soh’s effort by saying they knew commandos who could run faster.

Mr Ng said that Soh has worked for years to achieve what he has.

Now, discrediting his achievement is akin to our colleagues taking credit for our work. Let’s be fair and celebrate each others’ achievements.

Therefore, Soh is issuing the challenge.

Commandos were inadvertently dragged into the conversation by others, which he described as keyboard warriors.

As a result, stuff has gotten nasty, with both sides firing salvos.

One of the accusations levied at Soh is that he’s a show-off.

Mr Ng defended him, saying that his garnering attention is part of his job.

He understands this as he’s a running coach himself.

Getting eyeballs, which Soh has done, is valuable to sponsors.

Meanwhile, Mr Ng has asked commandos to keep their cool and let the keyboard warriors say whatever they want.

He noted wryly that Pocari Sweat is probably the biggest winner in the saga.

In the latest post on the saga, Soh commented on some things he’s seen online and from leaked group chats of commandos. Apparently, there’s been strategising on how to get back at him for his statements previously.

Soh said there’s nothing honourable or glamourous about sabotage schemes while citing the commandos’ motto “For Honour And Glory”.

He was at pains to reiterate that he respects what commandos do and that there’s more to them than being fast.

So it was never about him versus them in the first place.

Something that’s been lacking about the saga is measured conversation.

The initial challenge wasn’t meant to discredit commandos, and the wording was quite specific in that regard.

However, it’s been twisted into this challenge against all commandos.

Props to Mr Ng for stepping in to emphasise that this isn’t the case, from his own perspectives as a commando and runner.

Any disagreements should be settled on the running track, lest we get into an uglier keyboard war.