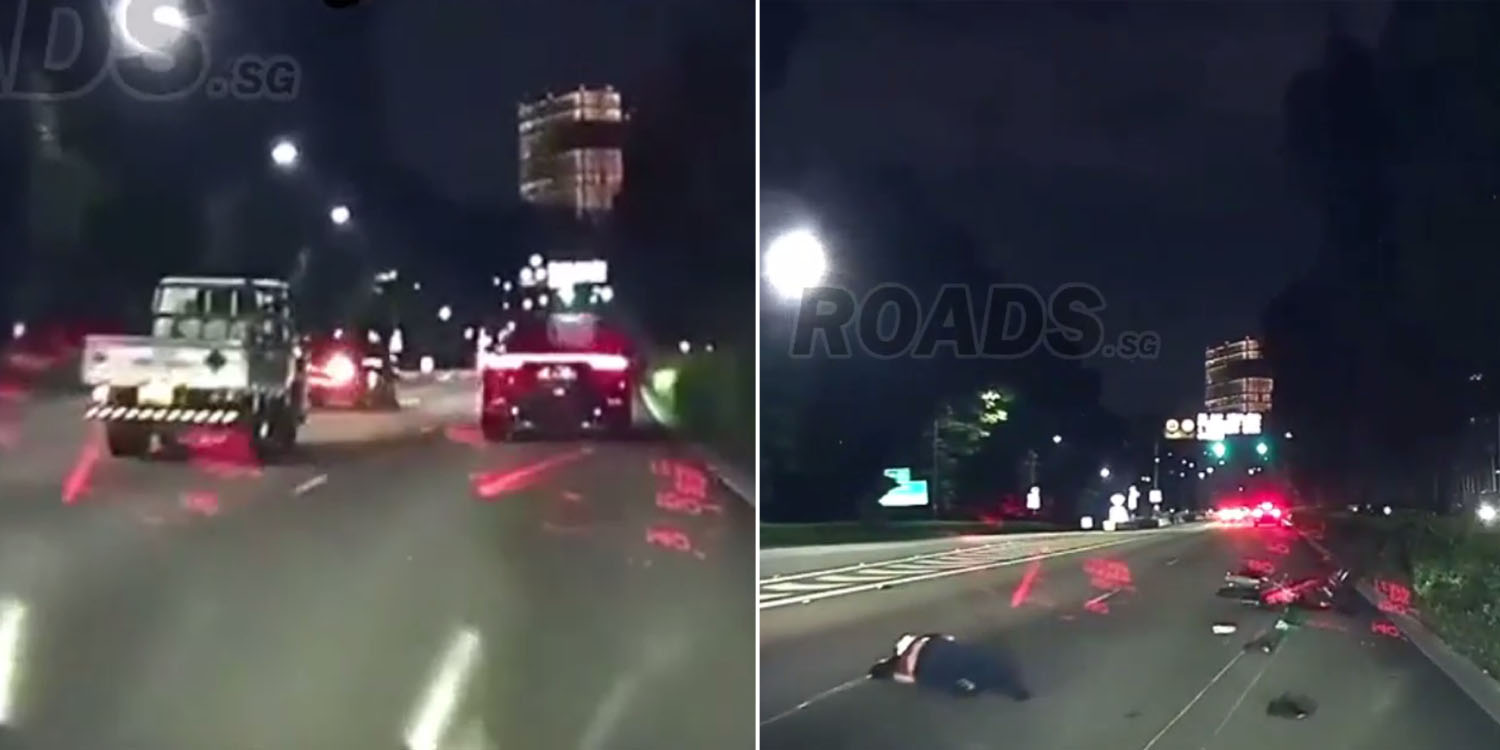 The Bentley stopped a distance away after the accident.

Bentley Rams Into Motorcyclist On The CTE On 18 Apr

Overtaking and changing lanes might seem like everyday actions for veteran drivers. Even so, doing that on a busy expressway still carries some risks.

On Sunday (18 Apr) night, a Bentley traveling on the Central Expressway (CTE) was caught overtaking multiple vehicles at high speed before ramming into a motorcycle, leaving the rider sprawled on the ground.

SCDF confirmed that one person was conveyed to the hospital following the incident.

The accident allegedly happened near Exit 1B along the CTE, which leads to Outram and Tiong Bahru Road.

In a dashcam footage on the ROADS.sg Facebook page, a black Bentley can be seen travelling in the first lane behind another vehicle. At the 8-second mark, the vehicle starts filtering into the adjacent lane to its left before filtering once again into the left-most lane. 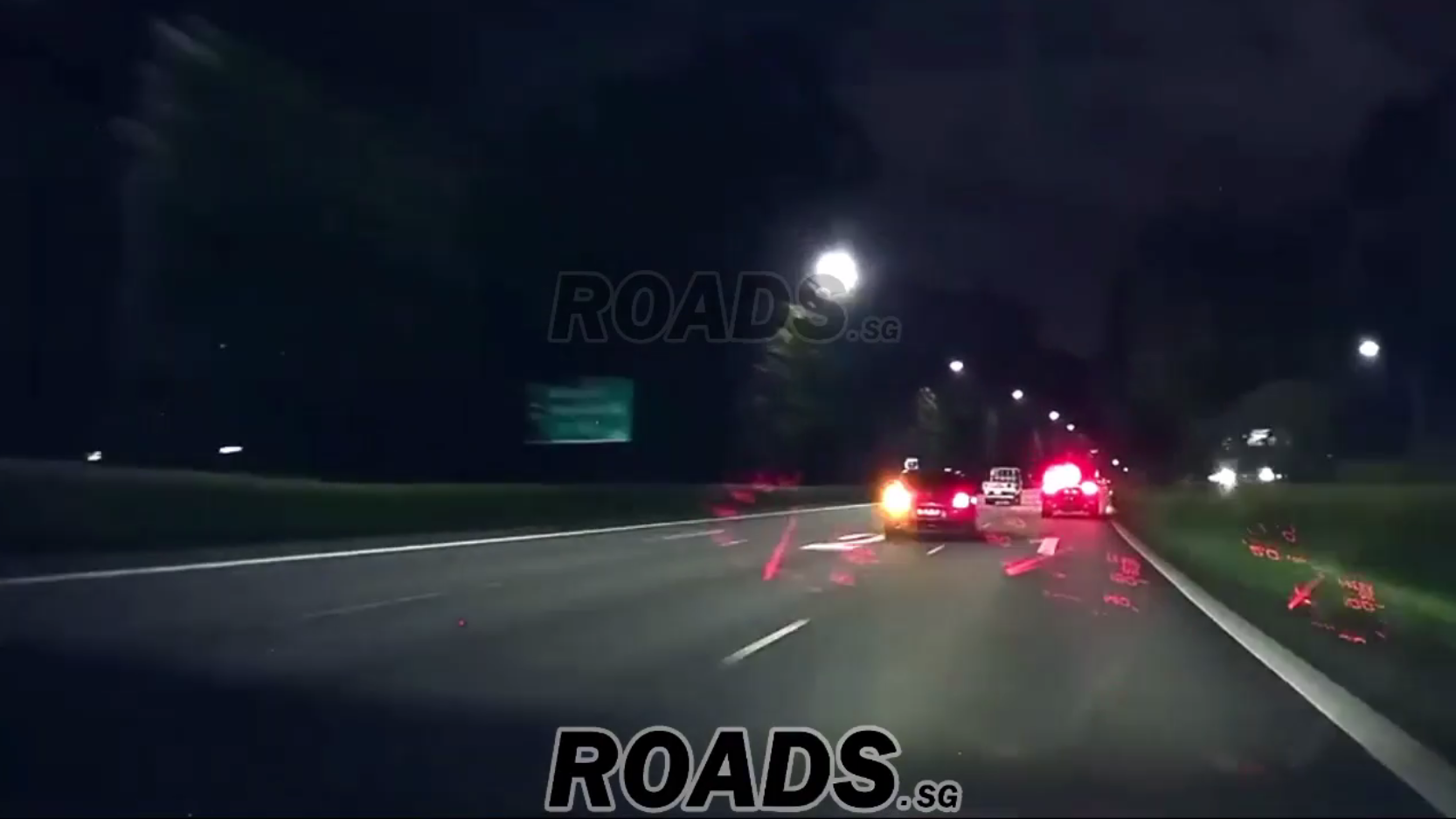 It took the driver just 4 seconds to filter between the 2 lanes.

Bentley rams into motorcycle along the CTE

Just seconds later, the car veers to the right instead, overtaking a white lorry in the second lane. 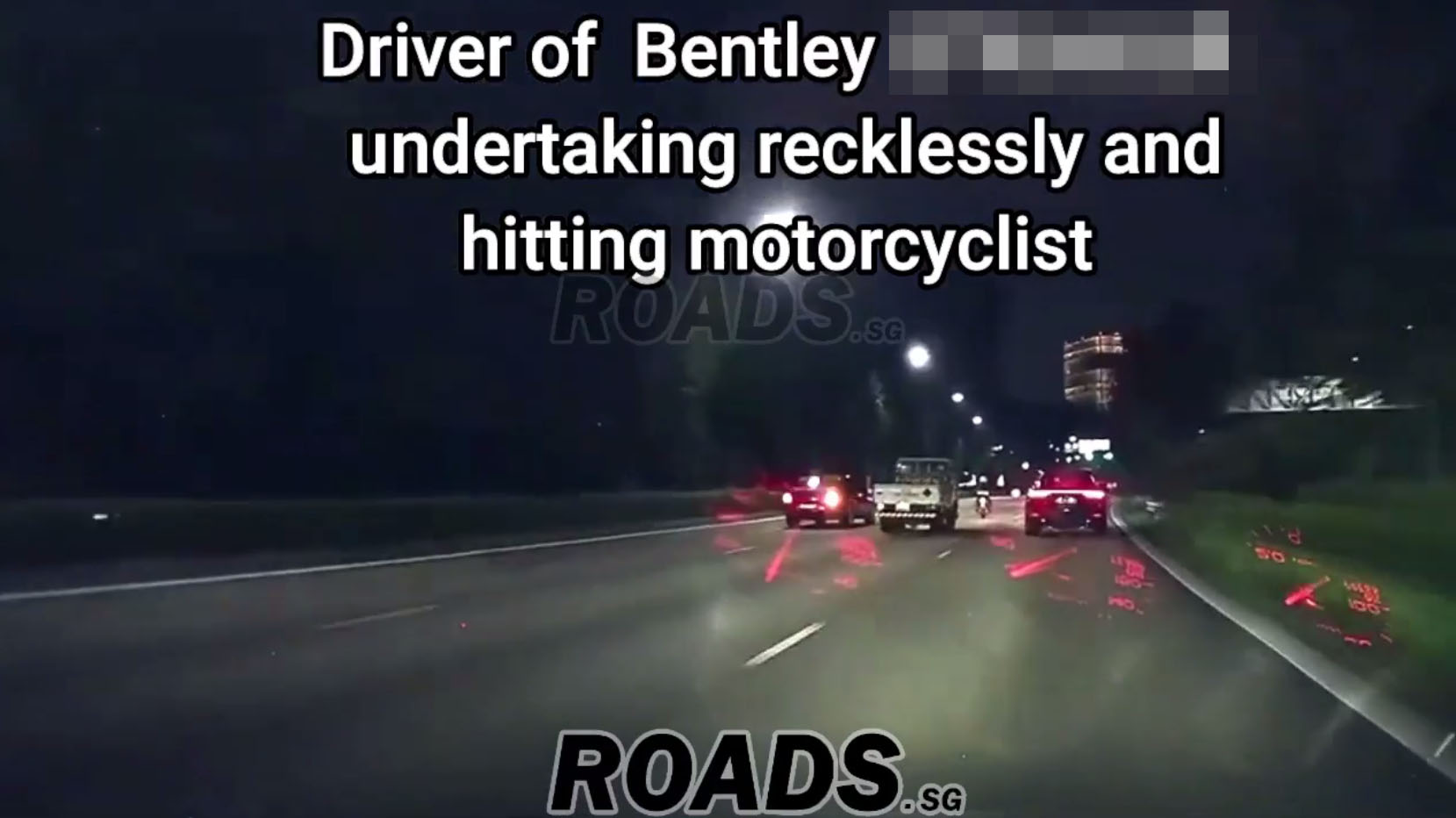 Perhaps oblivious to the motorcycle travelling slightly ahead of the lorry, the driver of the Bentley ends up ramming into it. The impact throws the rider off his motorcycle, and he tumbles several times on the road. 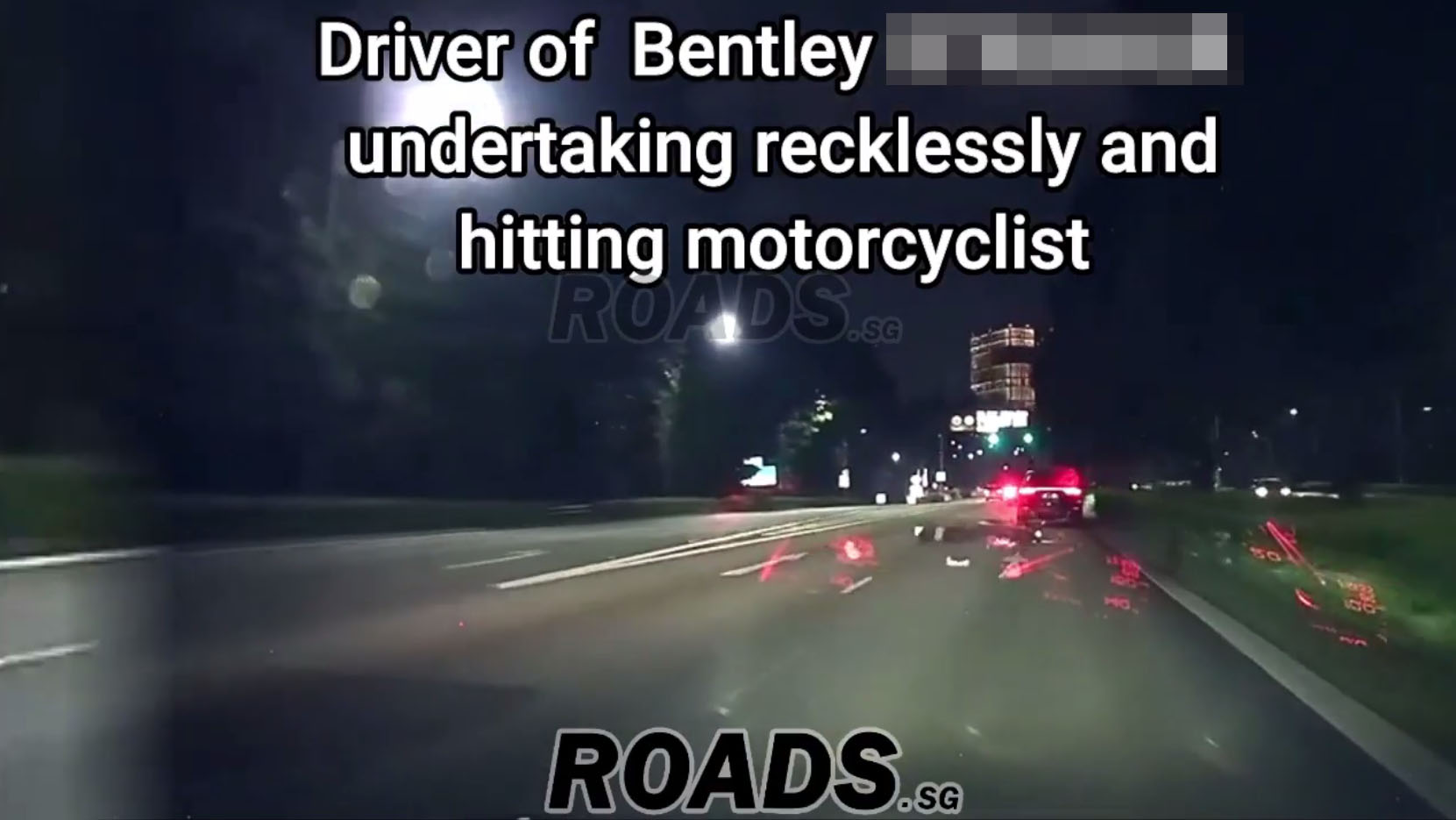 A quick look at this section of the road reveals that the third lane is a left-turn lane that leads to Outram and Tiong Bahru. There is thus a likelihood that the Bentley driver had intended to travel straight, but only noticed the left-turn markings at the last minute. 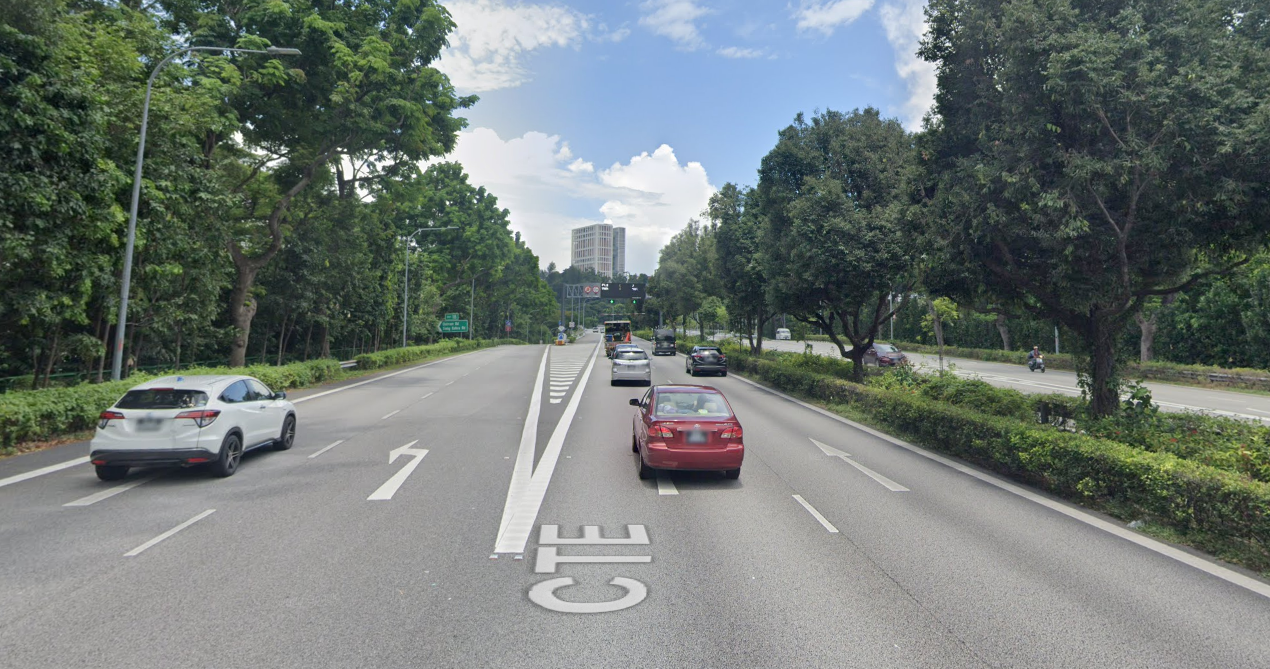 A few drivers travelling nearby stopped their vehicles to render help and redirect traffic. 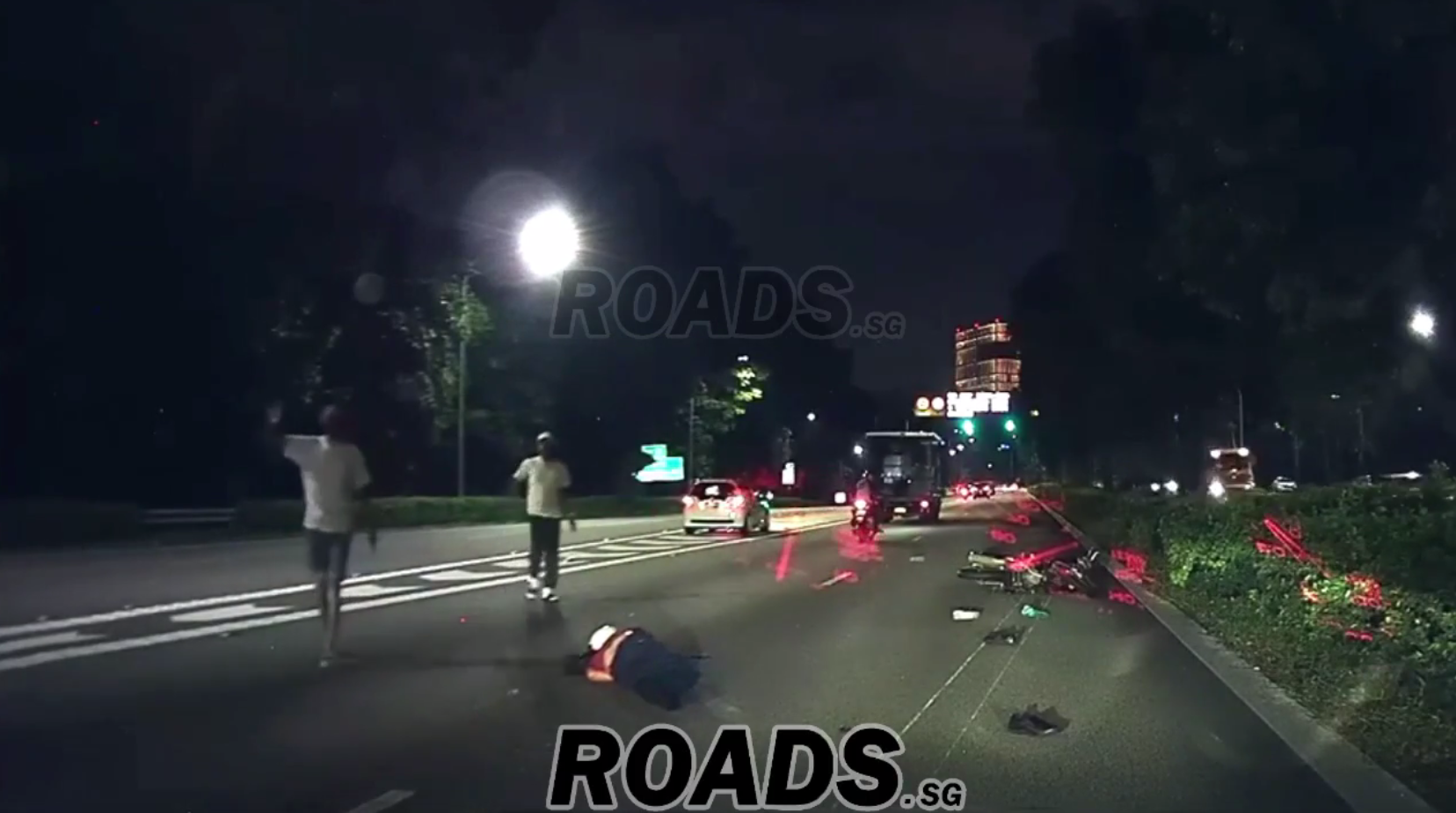 The Bentley apparently came to a stop following the accident, albeit further down the road. SCDF conveys one person to SGH

In response to MS News queries, the SCDF said they were alerted to the accident at around 8.55pm on Sunday (18 Apr).

The rider was conveyed to the nearby SGH following the accident.

Wishing the rider a smooth recovery

Watching the accident unfold is difficult, as it highlights the dangers of overtaking vehicles and changing lanes at high speed.

Road safety aside, kudos go to the motorists who stopped to help without hesitation.

We wish the rider a smooth recovery, and hope he’ll be alright.