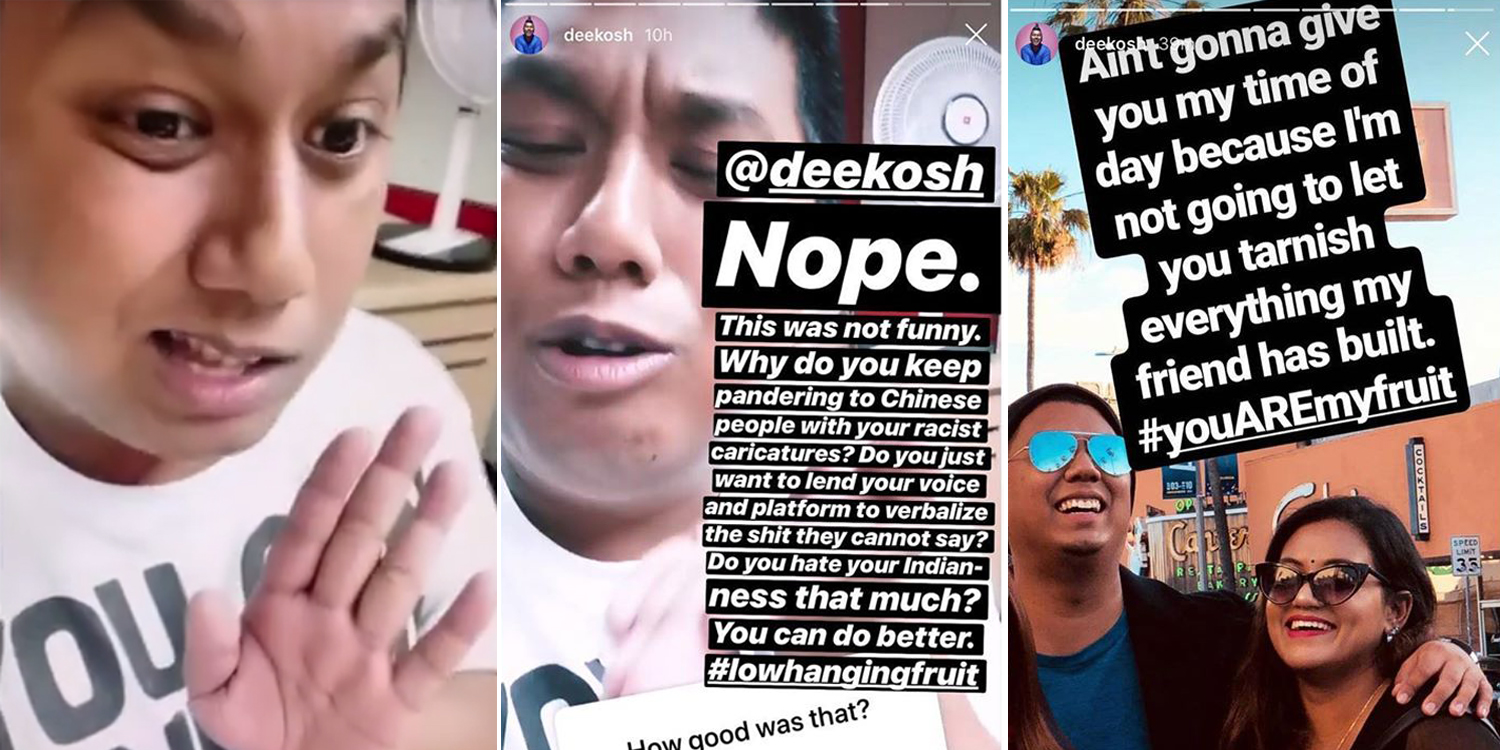 Anyone who spent extended periods of time on social media over the week would know that the spotlight is firmly on radio DJ and YouTuber Dee Kosh and the sexual harassment allegations made against him. 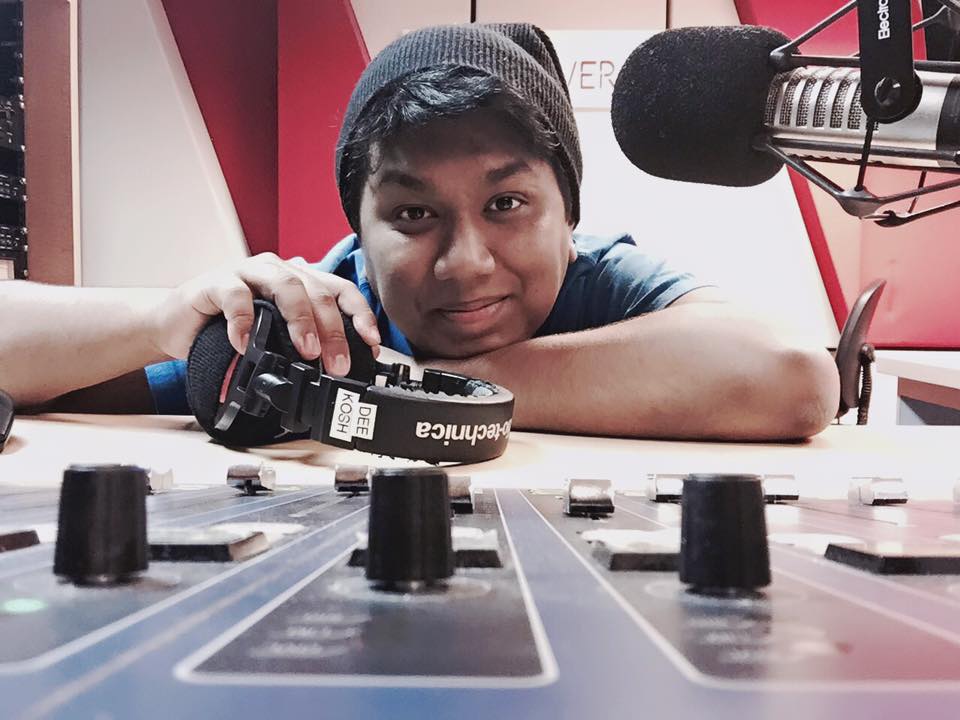 The incident seems to have opened a can of worms, as YouTuber Preetipls has another axe to grind with the DJ over another issue.

On Wednesday (19 Aug), she posted a series of snapshots and clips accusing Dee Kosh of power abuse over a parody in Dec 2018. 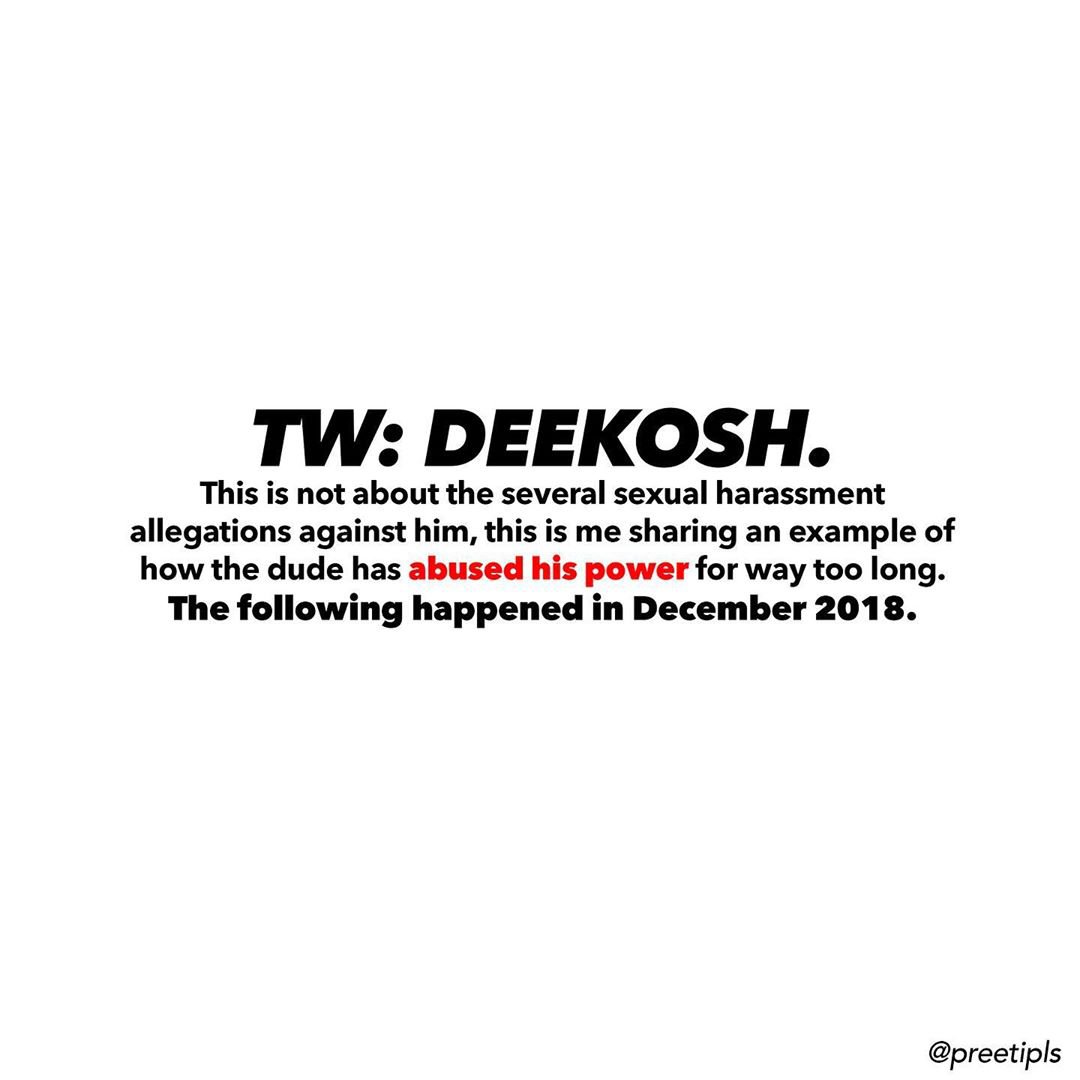 According to Preetipls, Dee Kosh posted a clip of himself singing Beautiful by Bazzi in an Indian accent nearly 2 years ago. 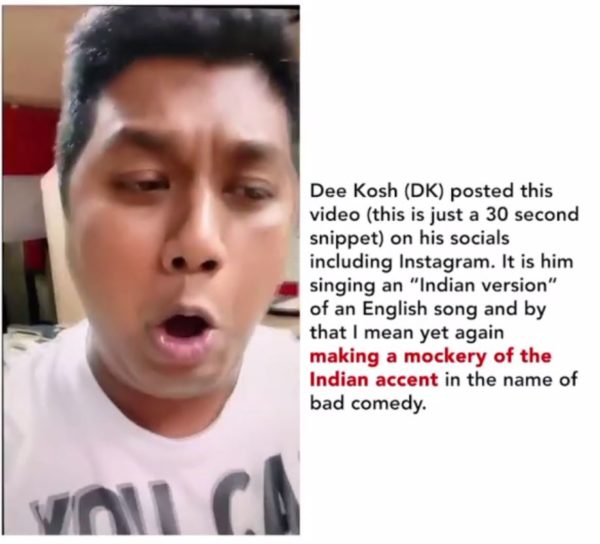 Preetipls’ brother Subhas Nair questioned Dee Kosh’s intentions for the video and apparently called him out on his own Instagram story. 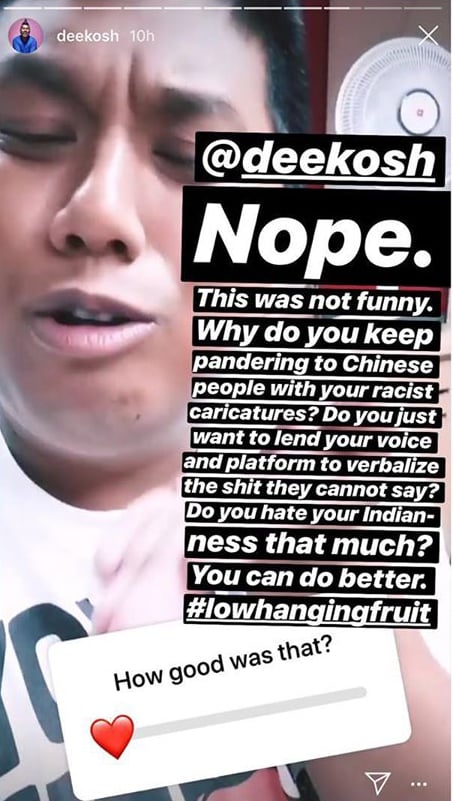 Dee Kosh later posted a picture of herself and Preetipls, with a caption stating that he will not be responding to Subhas’ claims so as not to “tarnish everything my friend has built”. 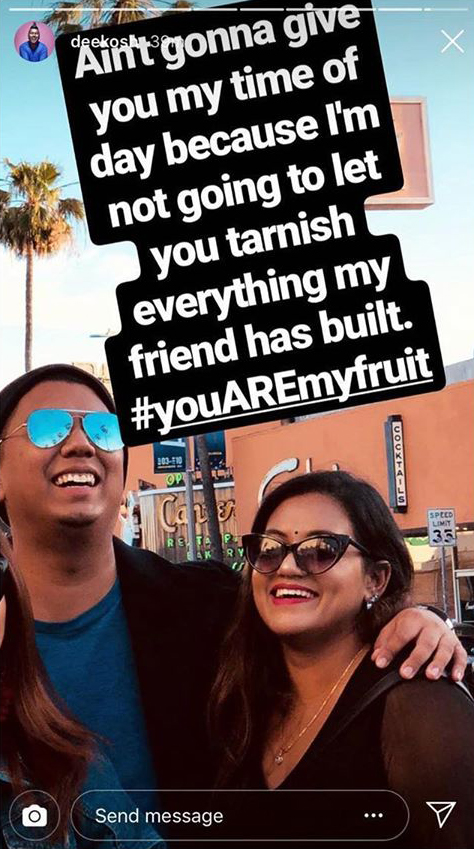 Dee Kosh was likely referring to Preetipls when he mentioned his “friend”.

Preetipls later texted Dee Kosh on WhatsApp, requesting for him to not drag her into the picture and to take down the InstaStory.

Dee Kosh acceded to the request but apparently told Preetipls that her brother would have been ‘destroyed’ if he had chosen to pursue the matter.

He also said that she, in turn, would be “collateral damage” if that happened. 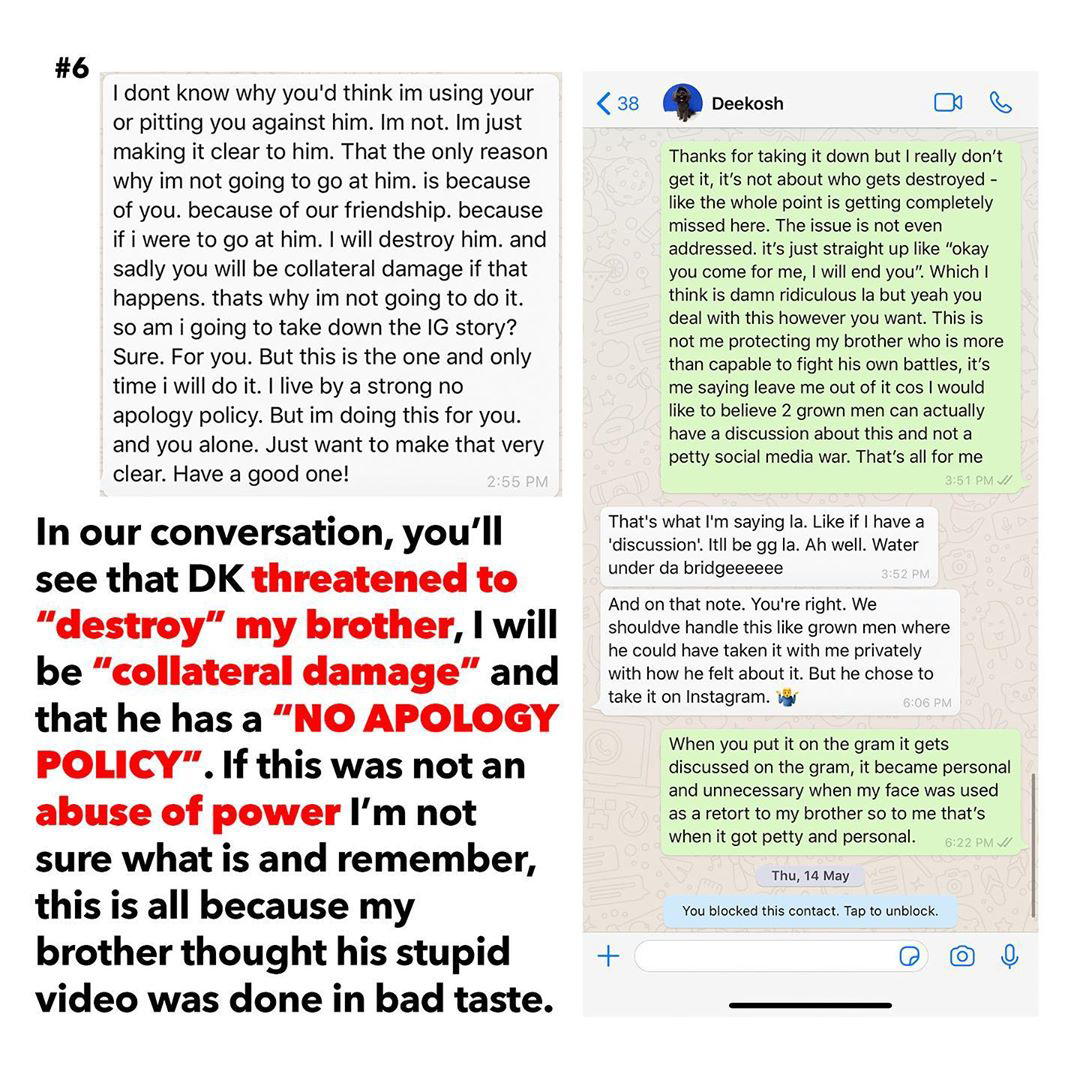 The implied threat to ‘destroy’ them, she said, amounted to power abuse as he wields influence on social media.

In the YouTube video, the pair was seen crossdressed as females while they read excerpts from Ms Choo’s poetry collection. The videos have apparently been taken down on YouTube. 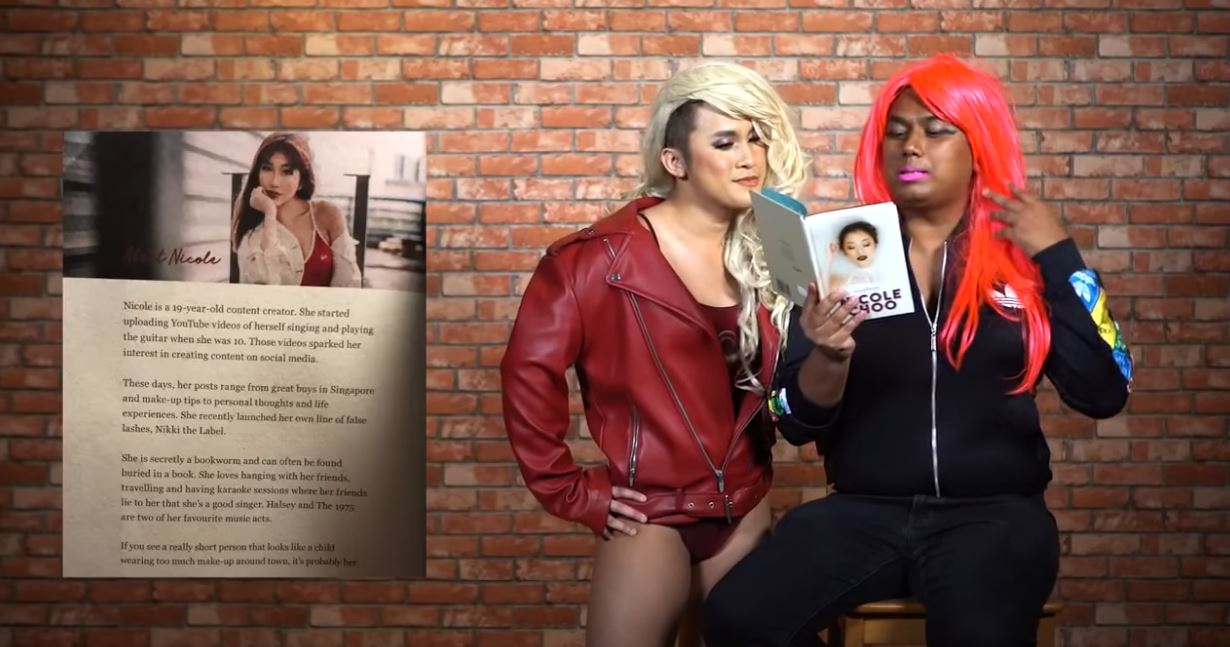 Ms Choo’s book publisher, who also happens to be one of her classmates’ mother, took to Facebook to highlight the effects of their actions.

She said that the attacks on Ms Choo as a result of their videos and posts eventually caused her to move overseas for a few months to stay with a friend. 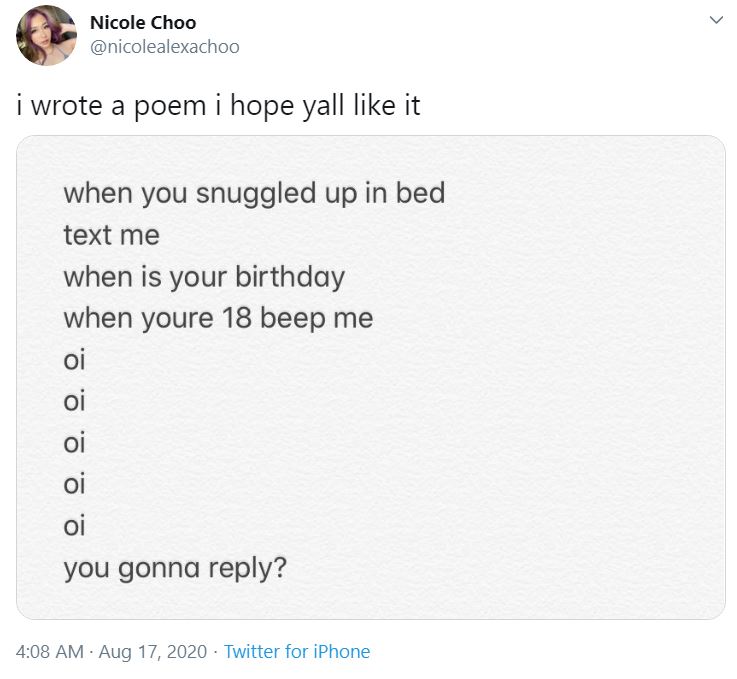 On Wednesday (19 Aug), Hirzi posted an apology on his Facebook page, calling their videos “tasteless” and conceded that it amounted to cyberbullying.

Preetipls isn’t the only personality to have spoken out on the incident.

Jade Rasif, a well-known nightclub DJ in Singapore, had also shared numerous posts on her Instagram account, seeking clarifications on the statement Dee Kosh had put out. 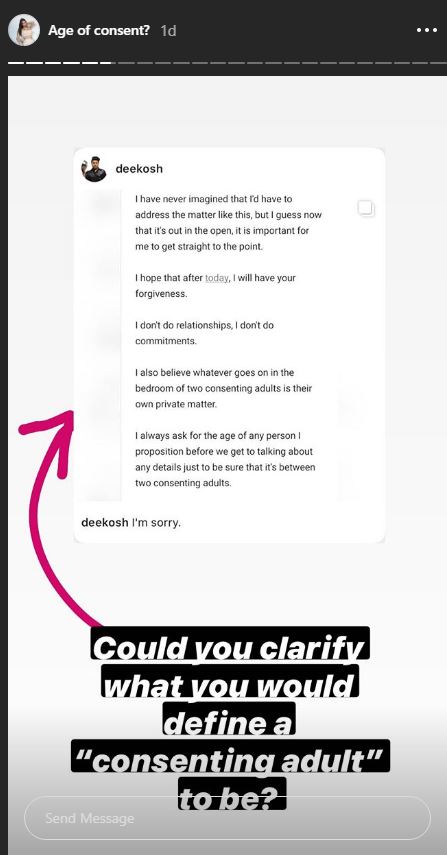 Other artists like Nathan Hartono, Benjamin and Narelle Kheng have also shared posts relating to the saga, reports The Straits Times (ST).

A saga of epic proportions

While the allegations against Dee Kosh are no doubt troubling, there are now also other accounts calling him out for his behaviour on social media.

There isn’t necessarily a co-relation with those allegations. However, celebrities using social media to mock and humiliate others is perhaps something that they should be held to account for.

As they say, with great power comes great responsibility.