Animal lovers want their pets to stay happy and healthy, but what if they get sick?

On Wednesday (26 June), a netizen warned her network against a scammer named Colin Ho. Colin allegedly asked for donations for his Bichnon Frise dog – named Fluffy – through an Instagram account (@save_fluffy).

Fluffy is, according to the page, diagnosed with skin cancer. 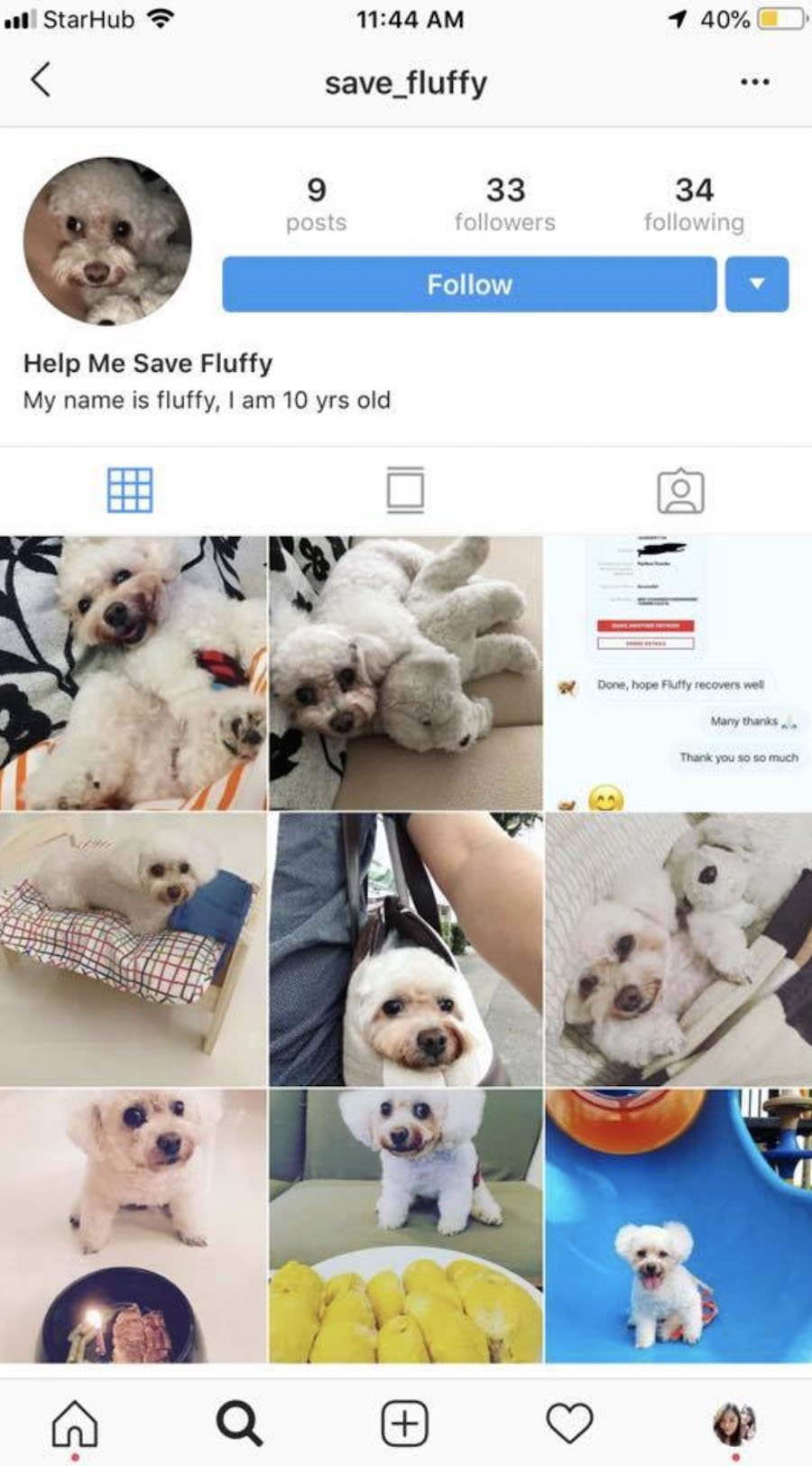 The netizen donated to Fluffy’s surgery at the West Coast Vetcare. She later asked for a past bill with the veterinary, but was blocked by Colin.

Upon contacting the animal hospital, she discovered that there was no dog named Fluffy registered in their system. 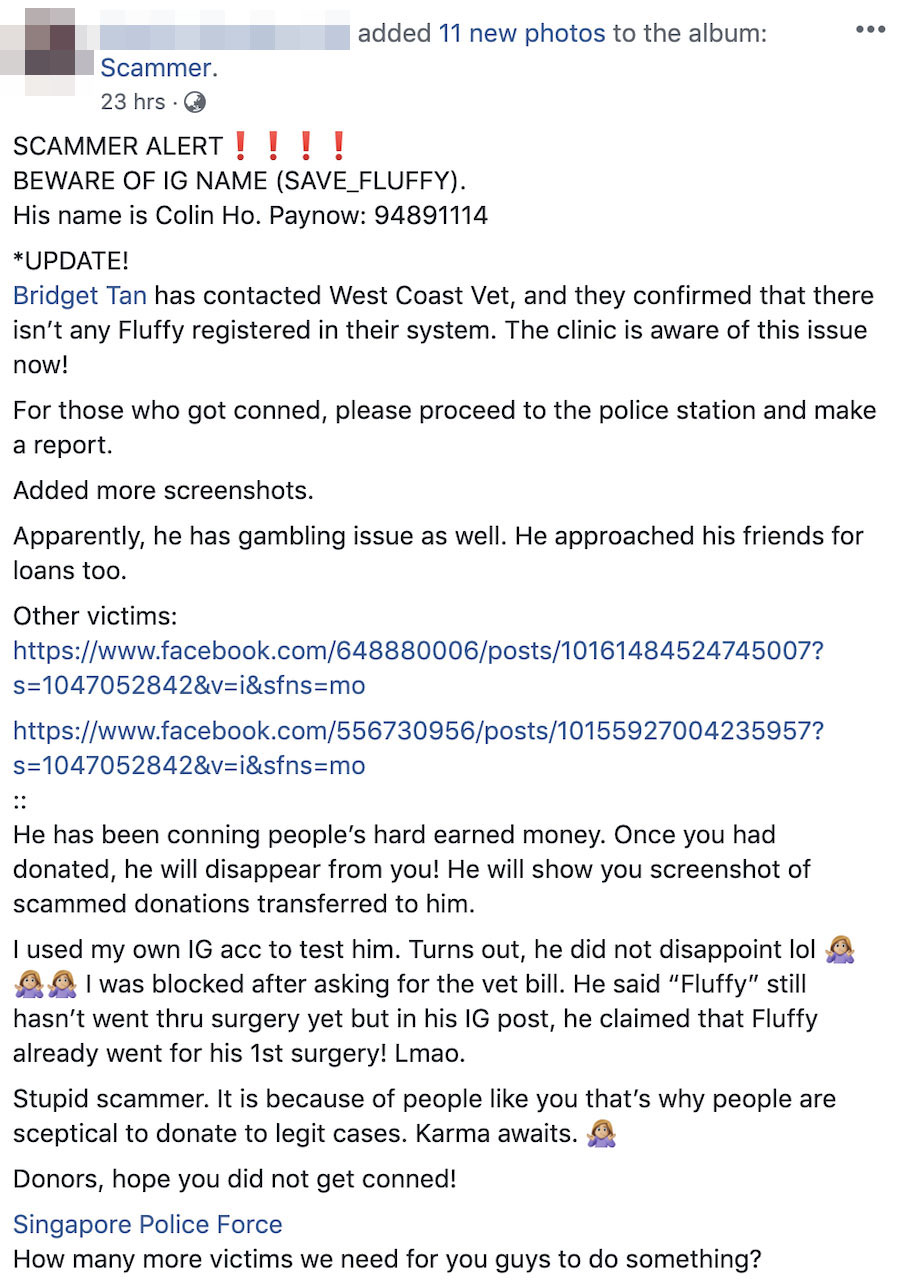 The netizen claims that Colin got in touch with netizens through Instagram DMs.

According to the message, Fluffy was diagnosed with Mast Cell Tumors Cancer — skin cancer for dogs. 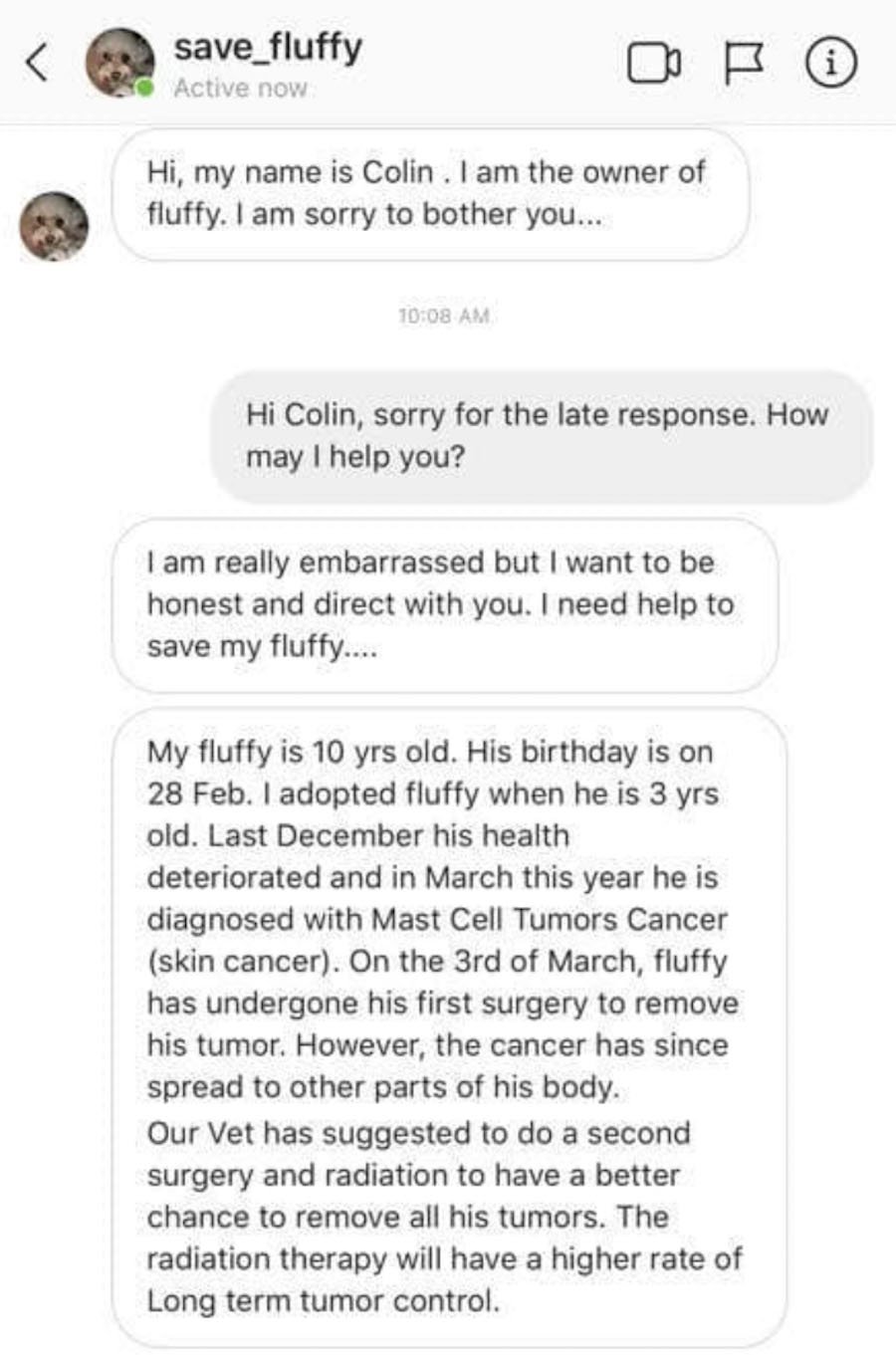 In March, he had undergone surgery to remove his tumor but the cancer spread to other parts of his body. The vet recommended a second surgery and chemo treatment which would cost around $10,000. 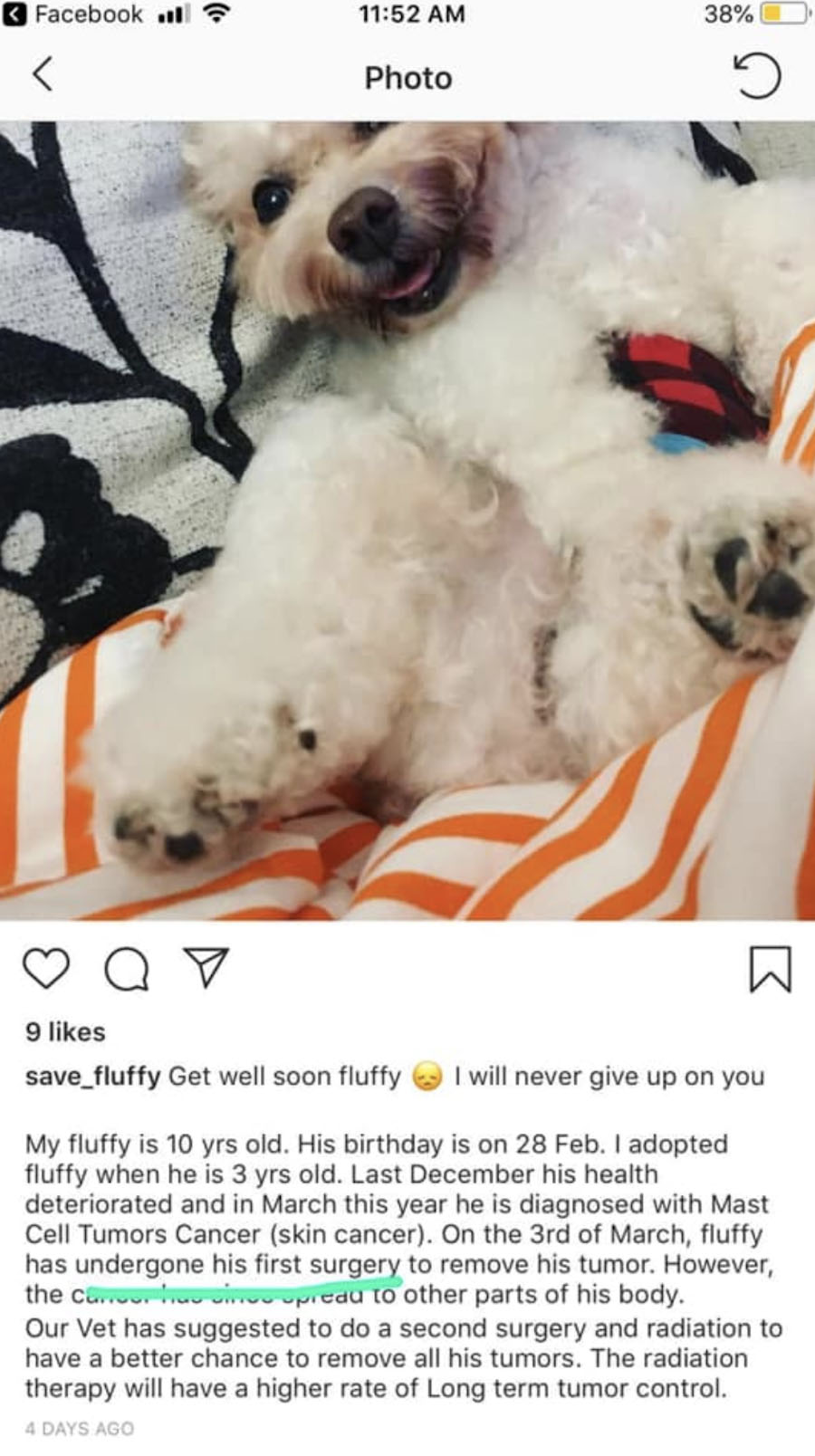 Unfortunately, Colin had exhausted all his savings for his mom’s treatment for cervical cancer. He is also currently paying off loans to banks and close friends.

Since he had no money for the treatment, he asked netizens to donate $20 to $50. 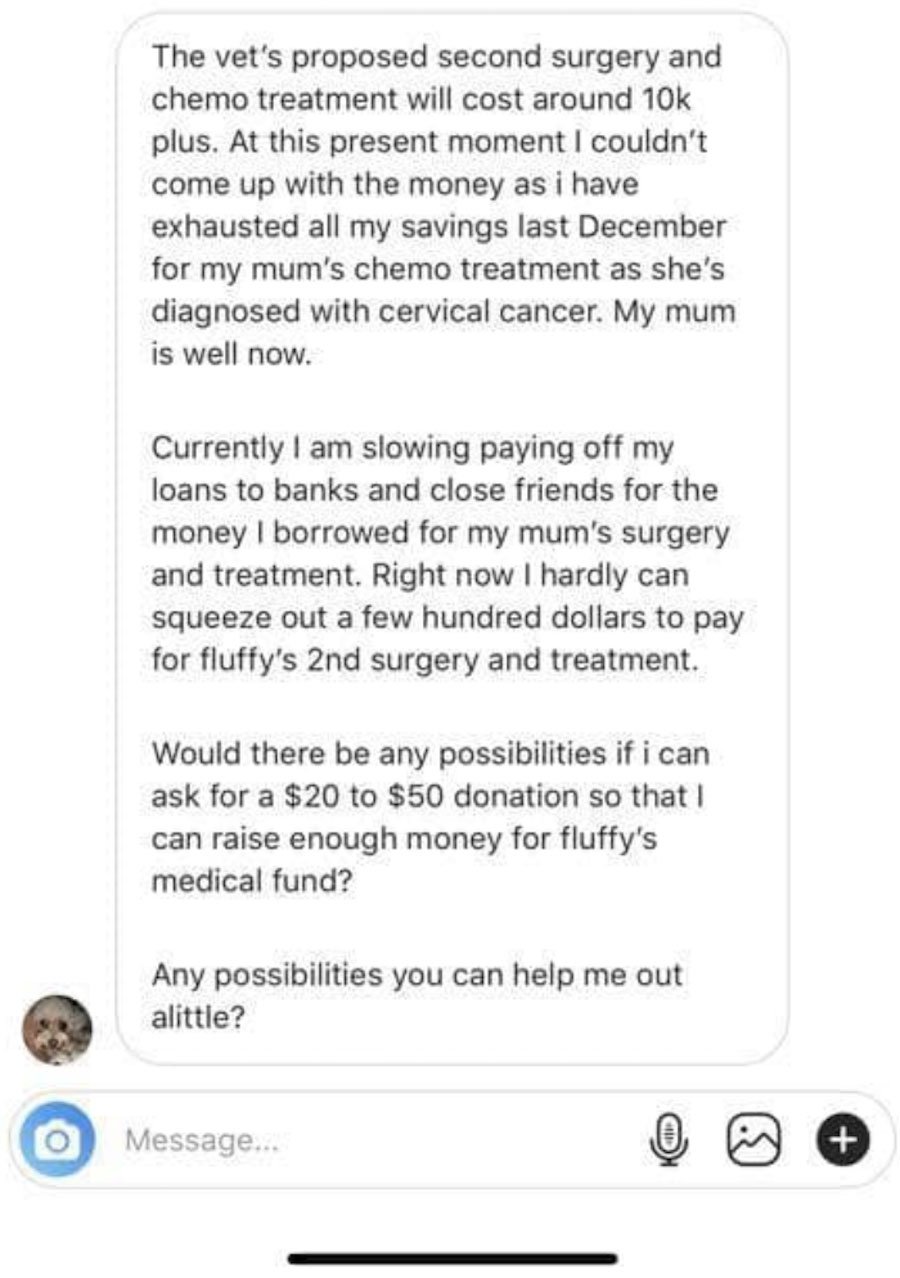 The netizen was touched with Colin’s story and voluntarily donated for Fluffy’s treatment.

Fluffy allegedly goes to the West Coast VetCare animal clinic under the care of Dr Liang. 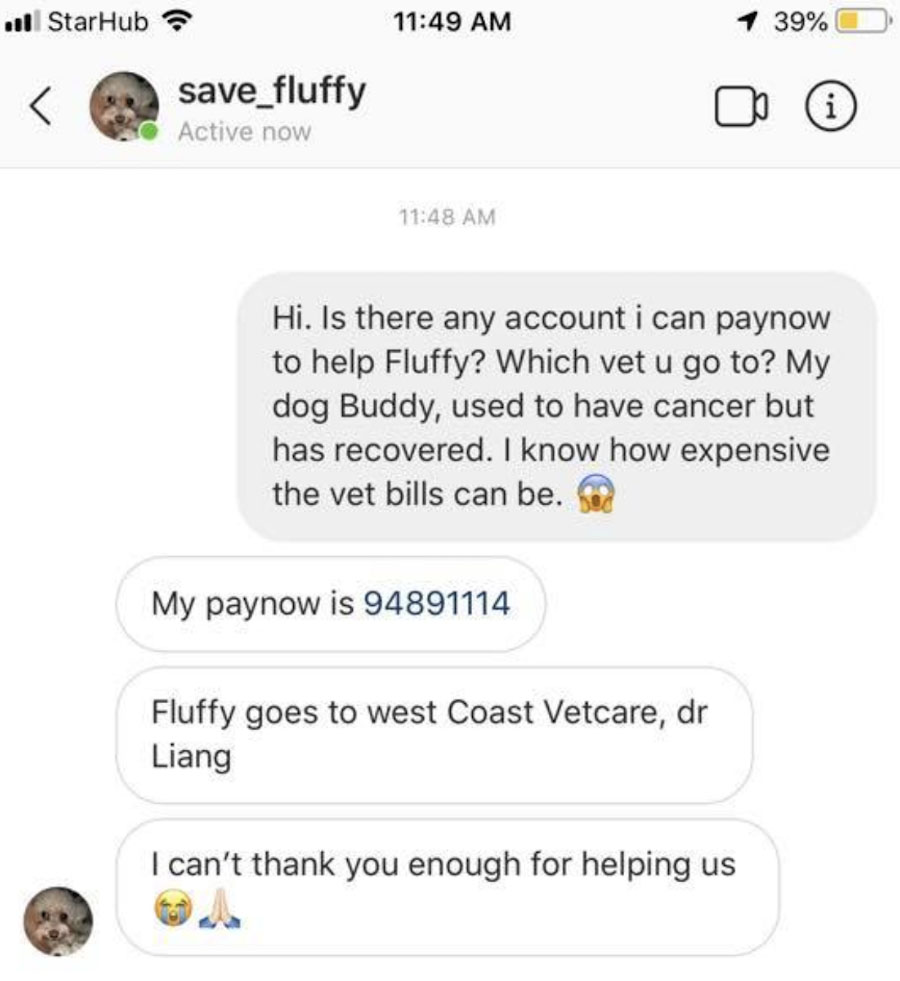 While the netizen asked for a photo of the hospital bill and account, Colin insisted on consolidating the donations through his PayNow account. When pressed for the bill repeatedly, Colin said that Fluffy had not undergone surgery  so he had no medical receipt. 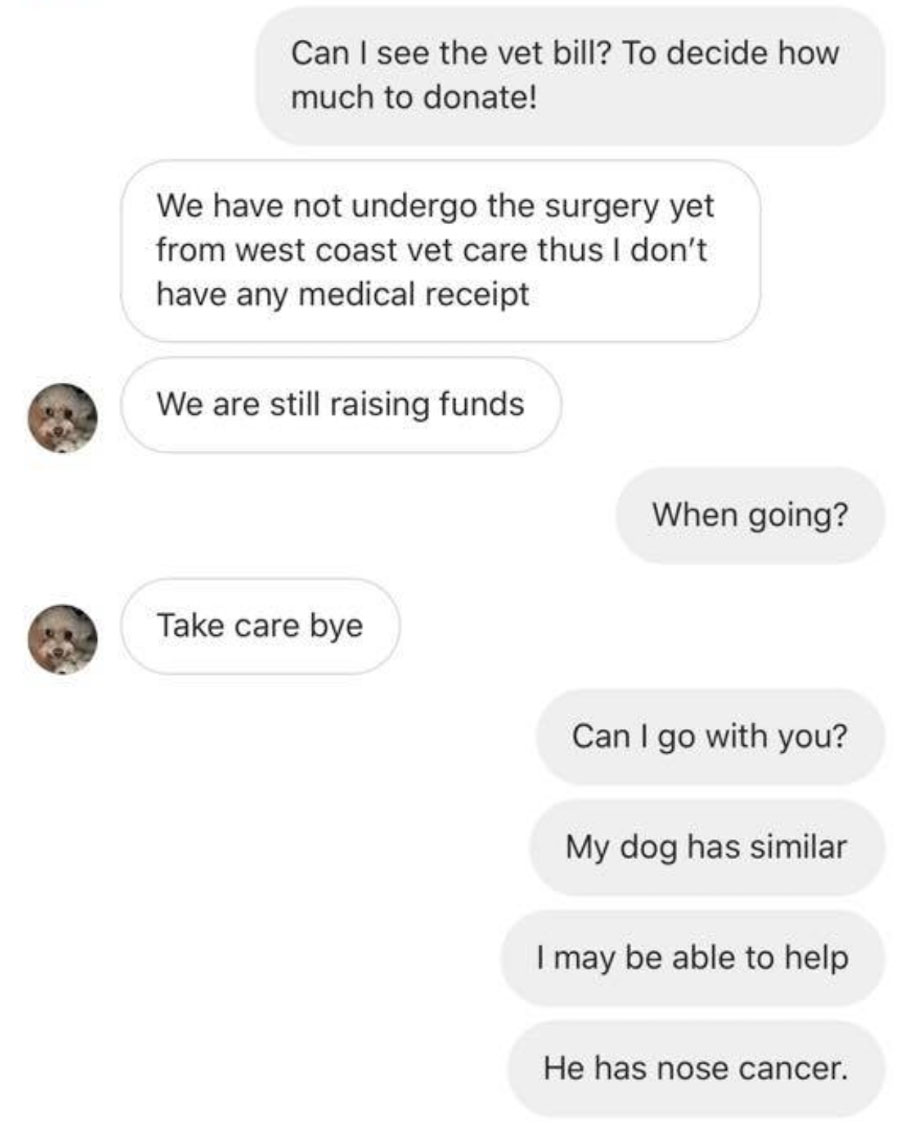 Locals in the marriage industry aren’t a stranger to Colin’s calls for donation.

In March, a netizen claimed that Colin Ho from Timeless Romance Photography asked netizens to loan him $200 to fund his father’s medical treatment in Jakarta. Repayment would be possible on 30 March. 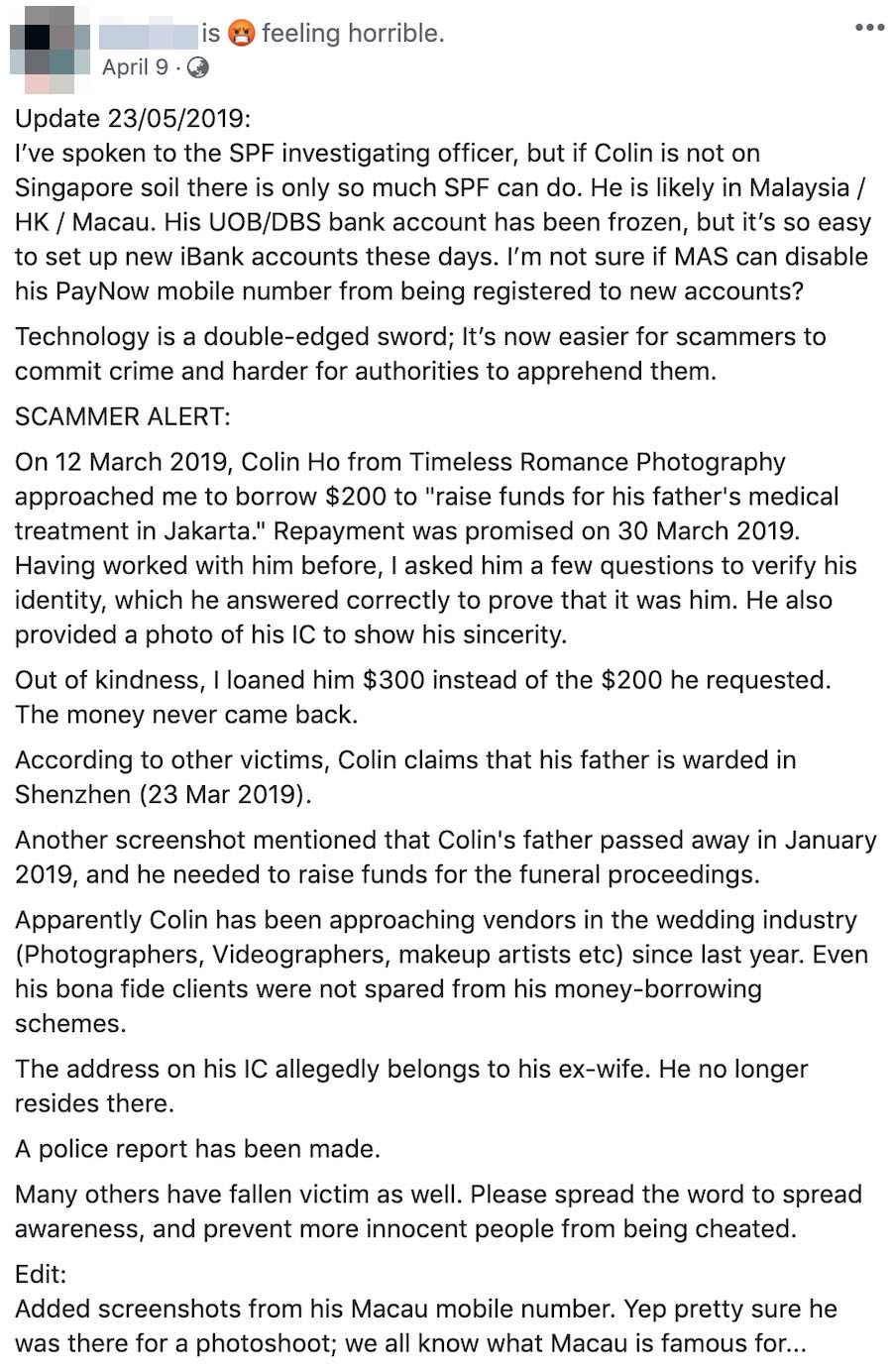 The netizen had worked with him personally. He loaned him $300 once he verified his identity and showed his identification card. Colin also got in touch with vendors in the wedding industry such as videographers, photographers and makeup artists. Some netizens were told Colin’s father was allegedly warded in Shenzen, while others thought that he passed away and needed money for the funeral.

The case has reached the Singapore Police Force. Unfortunately, Colin is not currently based in Singapore. His UOB and DBS bank accounts were frozen but his PayNow mobile number could still be active.

Scammer on the loose

The netizens involved have gotten in touch with the Singapore Police Force, but Colin is still on the loose.

If you were a past donor, please proceed to the police station and make a report.

Many of us donate to victims of unfortunate circumstances — but it’s always best to verify the person’s identity or the legitimacy of his claims.

Most importantly, we hope that no local would fall for his scams in the future.

If you have any information about these incidents, do feel free to contact us at [email protected]