At his last event for the day, a Chap Goh Mei – Hokkien for 15th night of Chinese New Year – dinner hosted by PM Lee, he ran into old colleague and former MP George Yeo.

ESM Goh posted a picture of them together on his Facebook page along with the caption,

George Yeo is back with the Aljunied team! 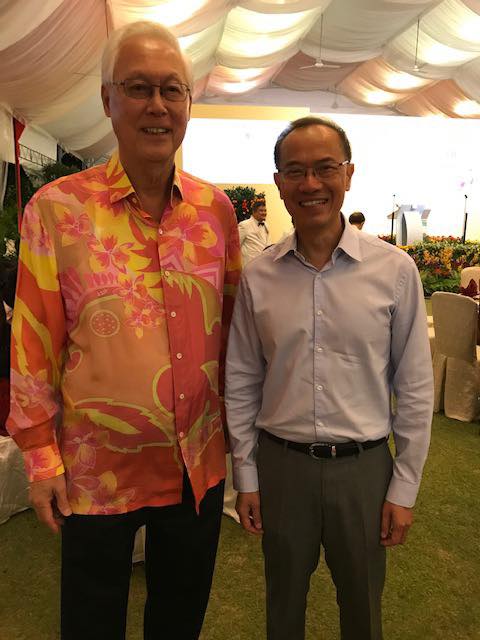 “Back with the Aljunied team”

Is ESM Goh saying that Mr Yeo is back serving the Aljunied team or that he was just there visiting? This is as one comment pointed out.

Unfortunately, ESM Goh never clarified the matter. Mr Yeo has also said nothing on his Facebook page or any social media platform.

So in the meantime, we should probably take it that ESM Goh meant the latter —  Mr Yeo was only back to visit the Aljunied team.

Most comments were in praise of Mr Yeo.

One user suggested that Mr Yeo, rather than re-entering the fray, should stand along the railings as an adviser.

There were also simple, heartfelt expressions of hope like this one.

Who is George Yeo?

In case you’re still wondering who George Yeo is, here’s a rundown of his achievements and what he’s done for Singapore in the past.

Since his entrance into parliament in 1988, Mr Yeo has served as:

As Minister for Trade and Industry, Mr Yeo proposed and fought tirelessly for the construction of the 2 Integrated Resorts – Resorts World Sentosa and Marina Bay Sands – which have become hallmarks of our country. What would Singapore look like without these?
Source, Source

After his retirement in 2011, Mr Yeo moved into the private sector and joined Kerry Logistics Network as a chairman and executive director where he continues to work today.

Given the wide range of positions he served and his experience in both the public and private sectors, Mr Yeo certainly sounds like an advantageous addition to our country’s leadership.