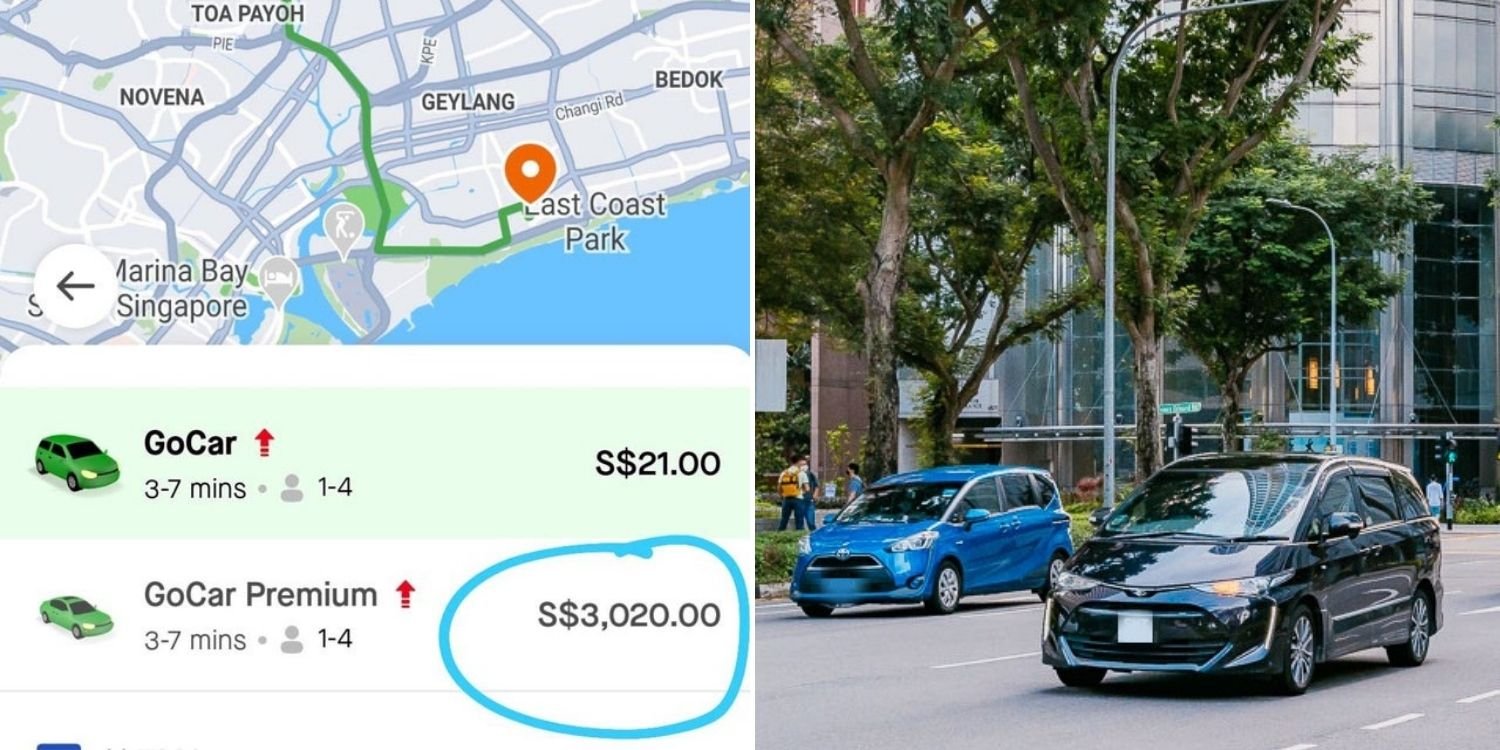 A netizen pointed out, though, that GoCar Premium isn't available in Singapore.

Private-hire car transport has become firmly established as a way of life in Singapore.

Many commuters prefer it for the ease of app-based booking and payment, as well as competitive prices.

Private-hire transport is also notable for implementing surge pricing, which means the trip can become a little expensive.

However, one netizen’s claim takes the cake. He was allegedly quoted more than $3,000 for a trip on GoCar Premium under the Gojek app. 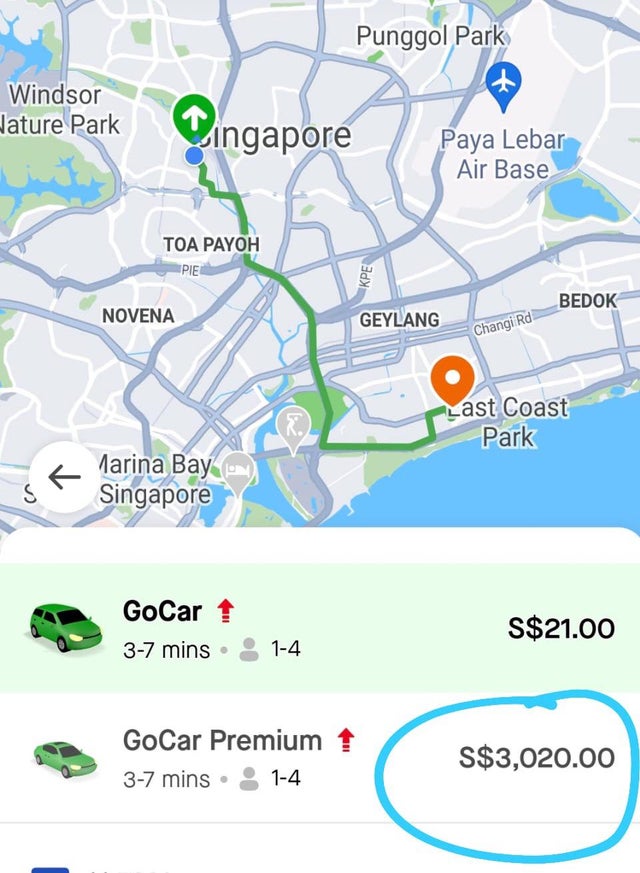 This led Redditors to joke that it should be called “GoBankrupt” instead.

On Saturday (15 Jan), Redditor u/mcclanedutch shared a screenshot, saying the “Gojek Premium tier” was “living up to its name”.

It appeared to be of the familiar Gojek booking screen, where a trip from around Bishan to East Coast was being searched—a distance of about 11km, according to Google Maps. 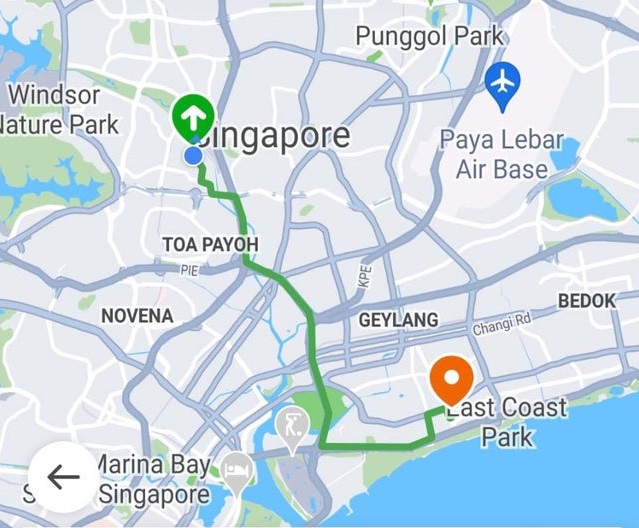 While $21 was quoted for a trip on the normal GoCar, the price for the same journey on GoCar Premium was a whopping $3,020. 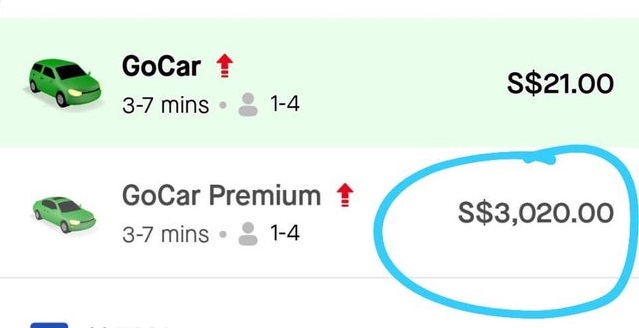 If the screenshot is to be believed, netizens were unsurprisingly shocked.

Of course, they didn’t miss the chance to joke about it, with one playing on the app’s name to call it “GoBankrupt”.

Another gave a much, much cheaper option—take a bus instead.

One commenter pointed out that there’s no point paying that amount for a car ride when you could fly to Dubai with that cash.

However, one netizen cast doubt on the screenshot – he pointed out that GoCar Premium is unavailable in Singapore. A check by MS News on the Gojek app also shows no option for GoCar Premium.

Thus, he surmised that either the screenshot was fake, or “something funny” was going on.

Steep prices for private-hire car rides aren’t unheard of in Singapore, though.

On 19 Dec, Beh Chia Lor posted a screenshot of another Gojek booking.

While the GoCar price quoted was a reasonable $18.20, the same trip was apparently $2,860 if it took place in a large GoCar. 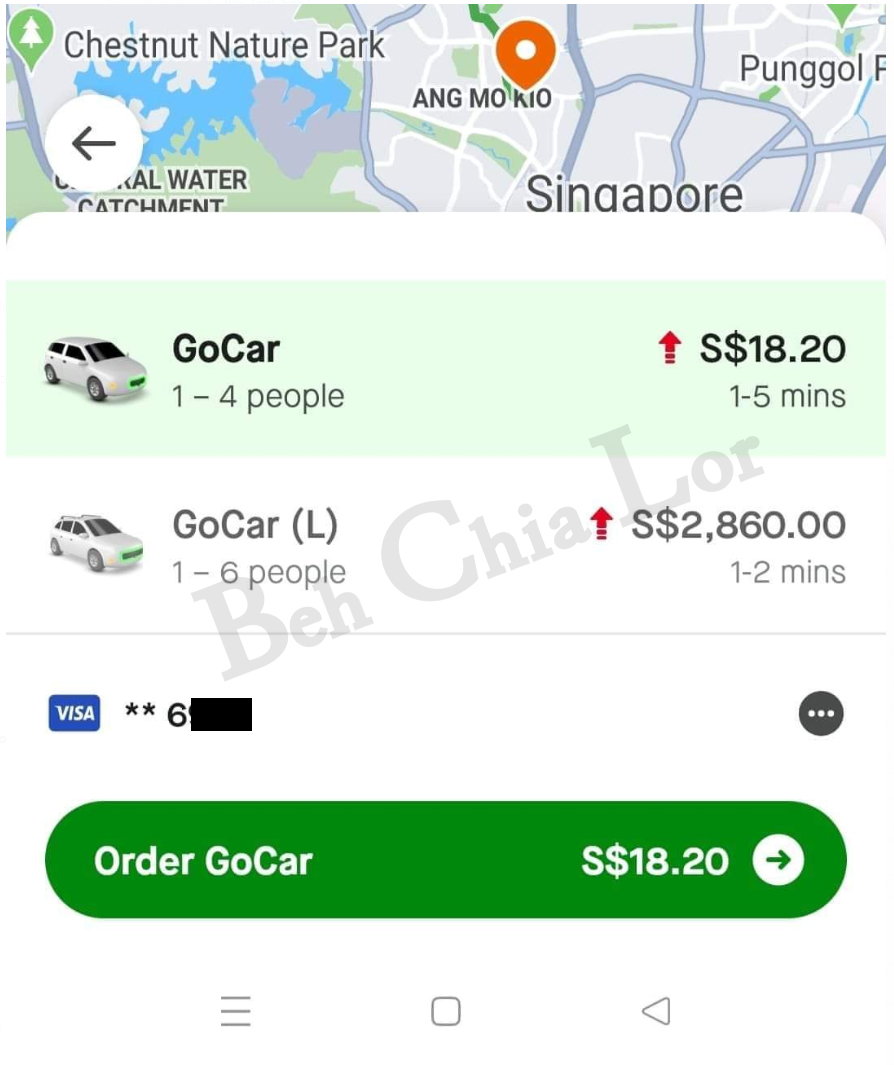 Basically, being able to accommodate 2 more people and cut the time by 3 minutes was worth an extra $2,841.80, or so it seems.

Be careful where you tap

Whether the $3,000 quoted was a glitch or something else, perhaps the OP was trying to make a point about the dangers of surge pricing in private-hire car rides.

After all, though Gojek implemented a platform fee in 2020, we’ve never encountered their prices going up that high.

Just remind yourself to be careful where you tap on the app if you don’t want to accidentally incur surged prices.

Featured images adapted from u/mcclanedutch on Reddit and MS News.