Woman Gives Birth On Board A GrabCar, Gets $8,000 GrabCar Voucher

On 7 July, Mr Shawn Yeo booked a Grab to Gleneagles Hospital. But he wasn’t heading there for an ordinary check-up or appointment.

His heavily pregnant wife, Ida had started experiencing contractions that morning and needed to get to the hospital ASAP.

Minutes into the journey, Ida’s water broke. Being uber prepared, Shawn grabbed a towel and was able to deliver the baby within the 20 minute ryde.

Ida experienced contractions at around 9.30am, and since our first baby’s labour process took almost 4 hours, we thought we had some time to head to the hospital.

We even wanted to wait for my father-in-law to come home so that he could take us to the hospital. However, Ida’s contractions intensified and we knew we had to go to the hospital as soon as possible.

Barely a few minutes within the car ride, her water bag broke. Armed with just a towel, we had to make do with whatever we had but thankfully, we were able to deliver the baby within the 20 minutes journey

The driver, Mr Yeong, turned into a midwife and provided valuable advice for the couple.

I was definitely nervous when I noticed that Mdm Nee was in labour, but there was no way I could turn them down when I knew that they had to be in the hospital immediately.

Mdm Nee was screaming throughout the entire journey but I did my best to stay calm.

Thankfully, both the mother and baby are safe. It’s not every day that you can say you helped deliver a baby — this is a ride that I will never forget

Quite an impressive feat, if you ask us.

When they arrived at the hospital, a team of 10 came out to assist with Ida and the newborn boy. His parents duly named him Isaiah.

According to Grab, Isaiah is the third ‘GrabBaby’ born in Singapore. The first one was born on 12 August 2017 and the second on 21 November 2017.

Sadly though, none of the babies have been named Grab yet. Maybe that’s a good thing – imagine the years of bullying that the poor kid would have to endure. 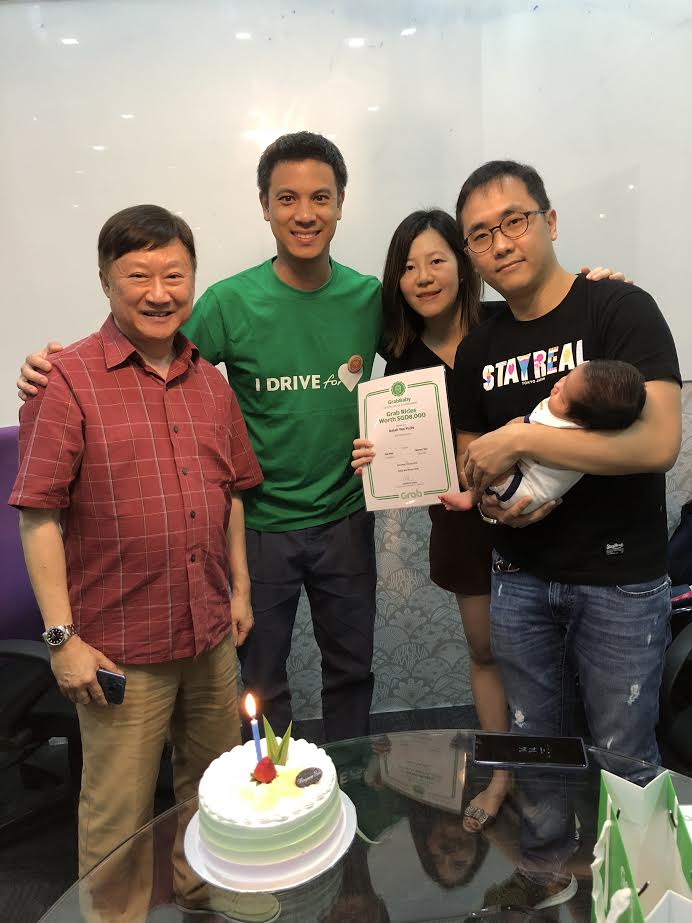 On Tuesday (7 Aug), the Grab team organised a reunion with the passengers and driver to celebrate lil’ Isaiah’s 1 month birthday. His parents were awarded with a Grab voucher worth $8,000. Grab also gave Isaiah a special onesie, and Mr Yeong, the driver, was given fuel vouchers worth $800.

It’s a happy ending for everyone involved. And yes, in case you were wondering,  Mr Yeong was given five stars and compensation for the mess made in his backseat.