Man Gripes About Quality Of Grab’s Service, Wishes Uber Would Come Back

There’s Only Grab Now That Uber’s Gone, And This Man’s Sad

Yet another guy shares his story about a Grab experience gone horribly wrong, while wishing for the impossible.

As in, for Uber to return to Singapore.

This time, however, he specifically calls out Grab’s customer service standards in an impassioned Reddit post on Monday (18 Jun).

Horrendous experience with Grab + how useless is their customer service? from singapore

At around 1am in the morning, a netizen at Sembawang Water Venture books a Grab ride out.

The driver apparently accepted within 5 min, while he was 3km away.

However, u/Beowulffff claims the driver doesn’t move for the next 5+ minutes. 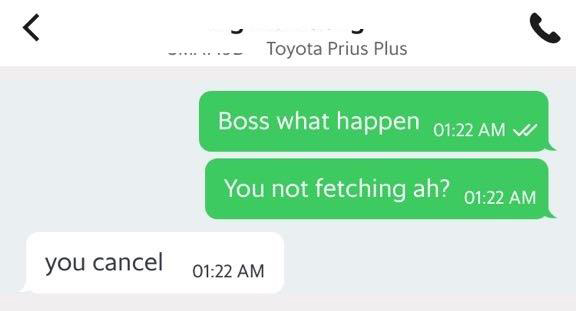 The driver cites a “Barrier problem” over the call, but promises to pick up the customer.

20 minutes later, the driver approaches the pick up point.

1m away from pick up

For some reason, the driver decides to stop just one metre away from where u/Beowulffff is standing.

The Reddit user then witnesses the driver “motion for us to wait”, while he reverses the car.

They watch in sheer horror as the driver backs up and drives away.

Subsequent calls to the driver were ignored and after he messaged driver “what happened?”, he replied “you cancel”.

Puzzled, the writer of the post refuses to cancel his ride, asking his friend to book another ride with Grab.

They are on the way home when he receives a call from the Grab Centre at 1.47am.

Now, the first Grab driver claims it was “inconvenient” to pick them up and requests for the Grab Centre to cancel the booking so he can continue working.

A race against time

Grab tells the Redditor they would waive the cancellation, but u/Beowulffff would need to book a new ride.

Making his suspicions known to the Grab staff that this was a “case of racism”. He pointed out that perhaps the driver did not want to fetch them as the commuters were Indian, while the driver was a Chinese. Additionally, he expressed unhappiness at being made to wait for half an hour.

The next response from Grab is even more bizarre.

He receives an email from Grab that begins with “Thank you for your email” the next morning.

When he hasn’t actually sent them an email at all.

The email, according to him, also resembles a “copy and paste” template job.

He ends his post by questioning if Grab’s service team is so efficient that they can “preemptively send out emails”.

And makes a final statement that resounds with everyone faced with similar experiences,

All in all, I miss Uber.

While we mourn the death of Uber in Singapore, our reliance on Grab will have to continue, till newcomers fully enter the market.

As these apps race to capture Singaporeans’ rides and hearts, the arduous wait for a strong contender to Grab continues.

Do you miss Uber or are you satisfied with Grab’s service? Let us know of your experiences in the comments below.