Expecting his first trip to go  offwithout a hitch, Ngee Ann Polytechnic student Joel Soon grabbed his phone and signed up as a GrabHitch driver.

Sadly though, things didn’t go too well for Joel.

On a Facebook group named “Signapore GrabHitch Zone”, he shared his horrible first experience with GrabHitch.

It all started when Joel decided to give GrabHitch a try on his way home from school.

He got a request from a lady who wanted to go from University Hall in NUS to Nanyang Auditorium in NTU. 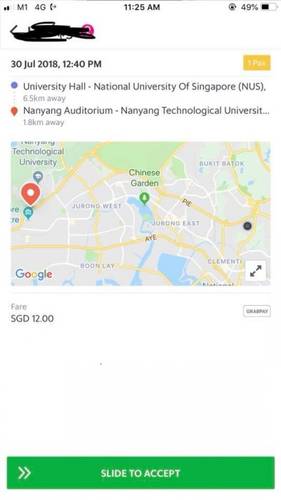 Things went awry when the passenger cancelled on him – but only after blasting Joel and his car.

The hitcher, who was attending her cousin’s convocation at NTU, first stated that she was going to cancel because she could’n’t ‘afford to attend a convocation’ in such a small car.

She then appeared to criticise  Joel for being a student, saying his alleged lack of experience posed a risk to her safety. 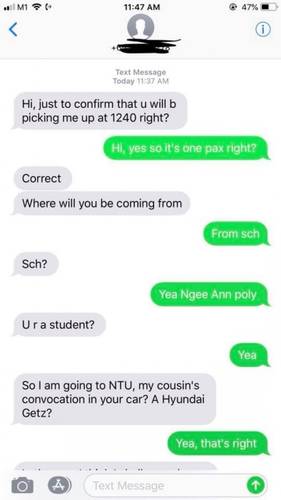 Joel’s ride, a Hyundai Getz 1.1L, was the target of much salt too.

First, she said that the car doesn’t have airbags (which isn’t true).

The roast of the poor Hyundai Getz didn’t stop there. The fuming hitcher went on to talk about how “small, cramped and uncomfortable” the car is, and remarked that people would “look cheap” travelling in that car. 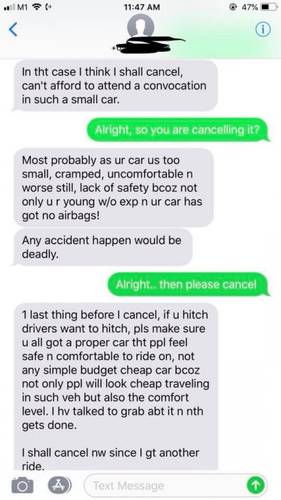 Before canceling her ride, the passenger had a PSA for all GrabHitch drivers: Those who want to hitch should get a “proper” car that makes people feel “comfortable” and “safe”.

And it’s something she’s shared with Grab as well – but they appear to be ignoring her (can you blame them)?

Let’s hope that Joel’s next ride goes better. Don’t give up on GrabHitch just yet – with COE prices creeping up again, you’re definitely going to be in hot demand. You also seem to be a better Grab driver than this dude, or even this one.