A Malaysian kampung boy proved that dreams can come true if you work hard enough.

Mohammad Afiq Ismail – a top graduate at the University of Essex – shared his success story with the Humans of Kuala Lumpur. After he got a scholarship to study in the UK, he took a part-time cleaning job and used his earnings to pay for his parents’ first flight abroad. Like any success story, Afiq experienced hardships and setbacks. He previously had low grades in his PMR (Penilaian Menengah Rendah) – a public examination for students in Malaysia – but here’s the incredible story of how he turned his life around.

Kicked out of school

Humans of Kuala Lumpur writes that Afiq was kicked out of school as a child.

He received 4As in his PMR – a public examination in Malaysia – which was short of the school’s 6As requirements. Out of 200 students, he was one of the six students who were asked to leave for receiving the lowest scores. 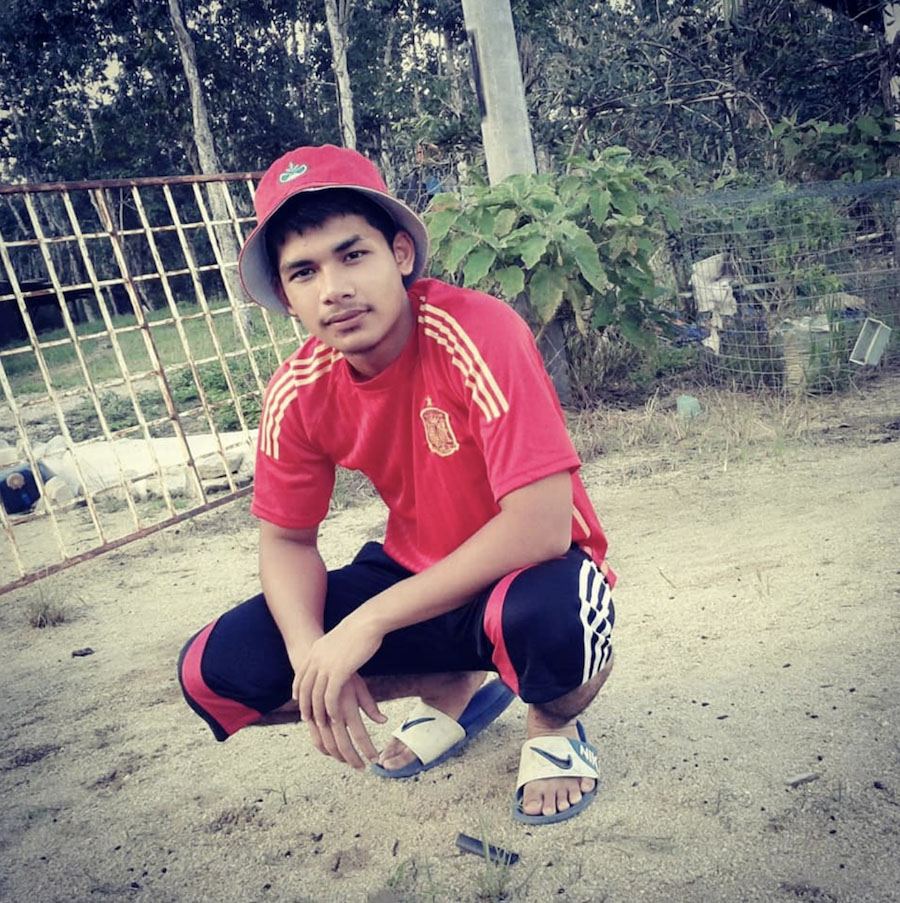 While he didn’t give up on acquiring an education, none of the schools near his area wanted to receive his application. So, he missed school for about a month.

Like any concerned Asian parent, his mom was very disappointed with his test results. She visited the Jabatan Pendidikan Negeri – the state education department – and pleaded the director to send him to a good high school.

It seems that Afiq’s bad grades were well-known by his schoolmates.

Afiq eventually ended up in the accounts stream but he felt looked down on by his previous schoolmates. He remained undeterred and worked hard at his chosen path.

I eventually fell in love with Accounting and worked hard to prove them wrong.

He became so dedicated to his studies that he received 10As and 1B at the Sijil Pelajaran Malaysia (SPM) — a national exam taken by secondary students. 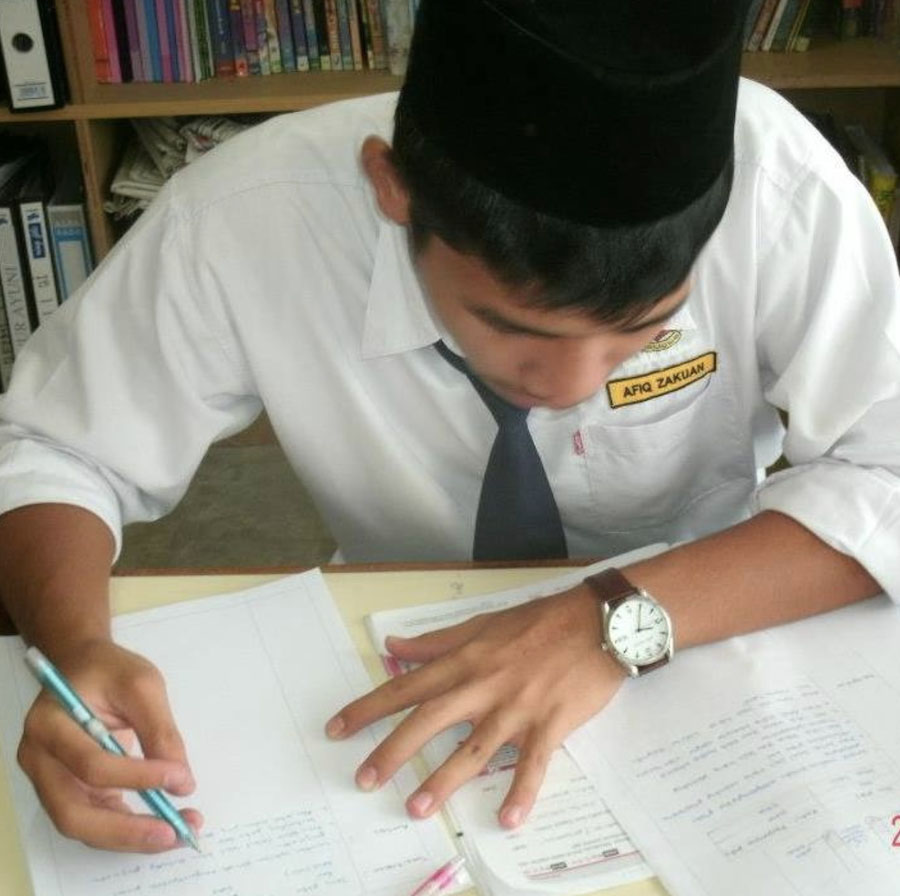 Thanks to his successful test results, he received a JPA scholarship to study at the University of Essex in the UK. The scholarship is awarded to the most deserving students in Malaysia.

Made ends meet in UK as a cleaner

Living in the UK does comes with a hefty price, he shared. To make ends meet, Afiq worked as a cleaner under a Student Union.

He woke up at 4am and started his work at 5am. His duty was to scrub floors, rearrange chairs and clean tables or toilets.

He told Humans of Kuala Lumpur,

It’s not much, but I felt happy when I knew that I helped others by making the university clean.

His work ethic can be attributed to the hard labor that he experienced at the kampung. During school holidays, he would help his father cut grass, mend fences and take care of the goats. 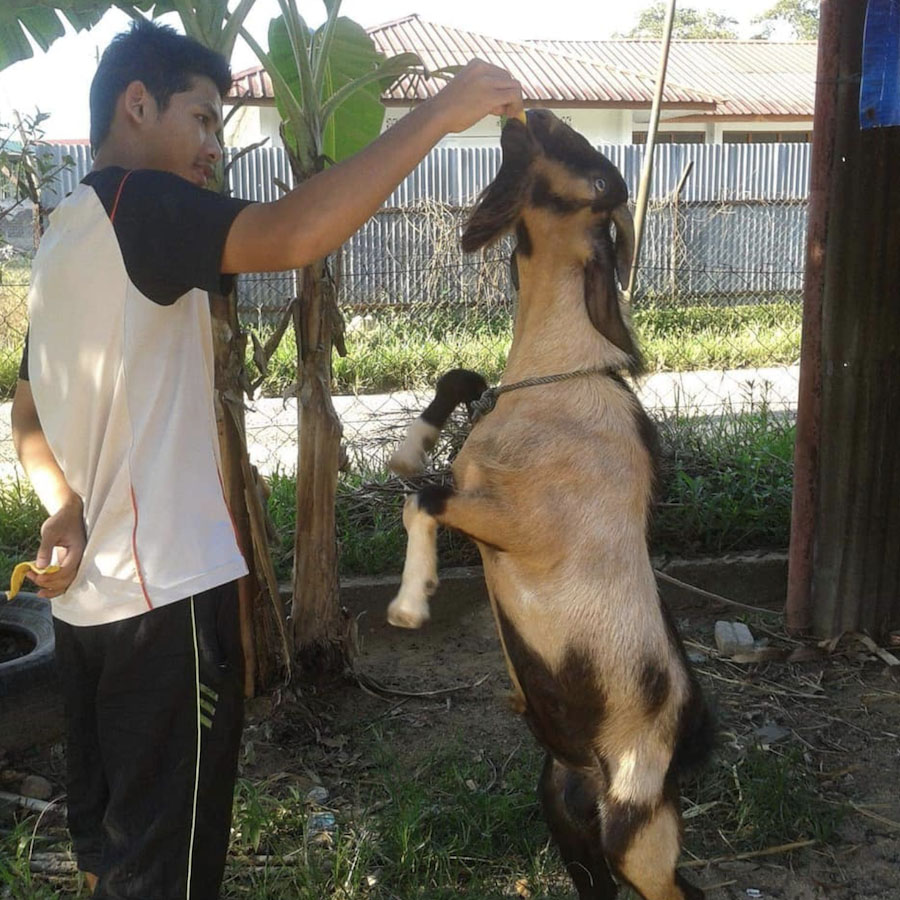 Afiq had to wake up at the crack of dawn, even during weekends. Fortunately, his supervisor noticed his work ethic and gave him more flexible working days.

Having fun on the job

Despite the early morning schedule, Afiq eventually learned to love his job.

Since he worked while no one was around, he was able to listen to Spotify songs. Sometimes he felt the music so strongly that he used the mop as a microphone while singing to Awie’s Tragedi Oktober.

In the UK, Afiq also observed that there wasn’t much of a stigma for those working in the cleaning profession.

Passerbys were considerate and apologised when they accidentally stepped on a spot that he was cleaning. He was also greeted “Good Morning” and frequently asked how he was doing.

Kampung boy gives back to his parents

Thanks to his cleaning job, he was able to afford a few luxuries for him and his parents.

I managed to raise enough money, which was about £2000 to buy flight tickets for my parents to come to the UK.

The trip was the first time that his parents were able to travel outside of Malaysia.

His parents were also able to witness him graduate with First Class Honours at the University of Essex. 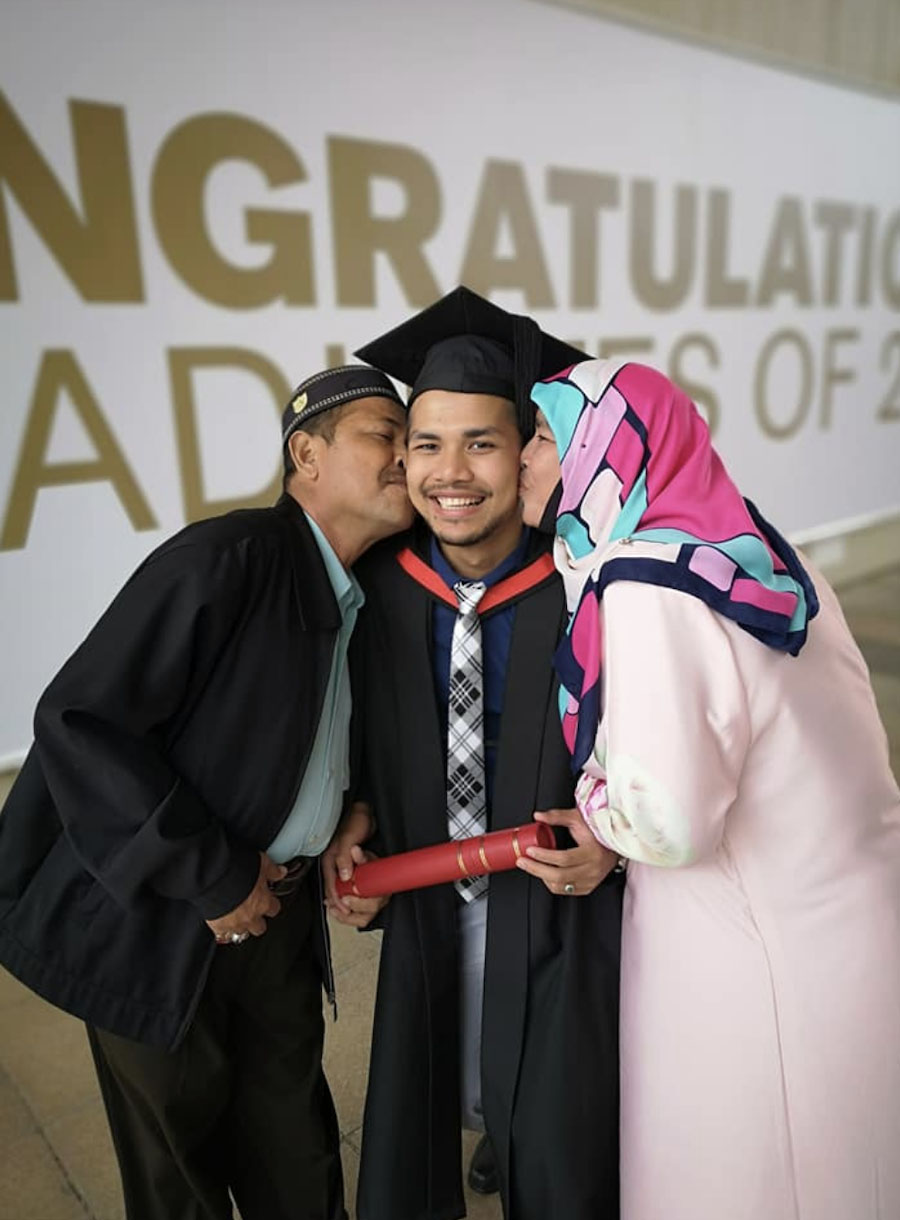 Afiq was inspired to succeed after watching his father work hard as a village laborer.

His father herded cows and goats on their small farm. To make more money, he sold fish, operated a grocery store, acted as a middleman and sold produce to factories. He earned RM 1,500 (S$496) per month. 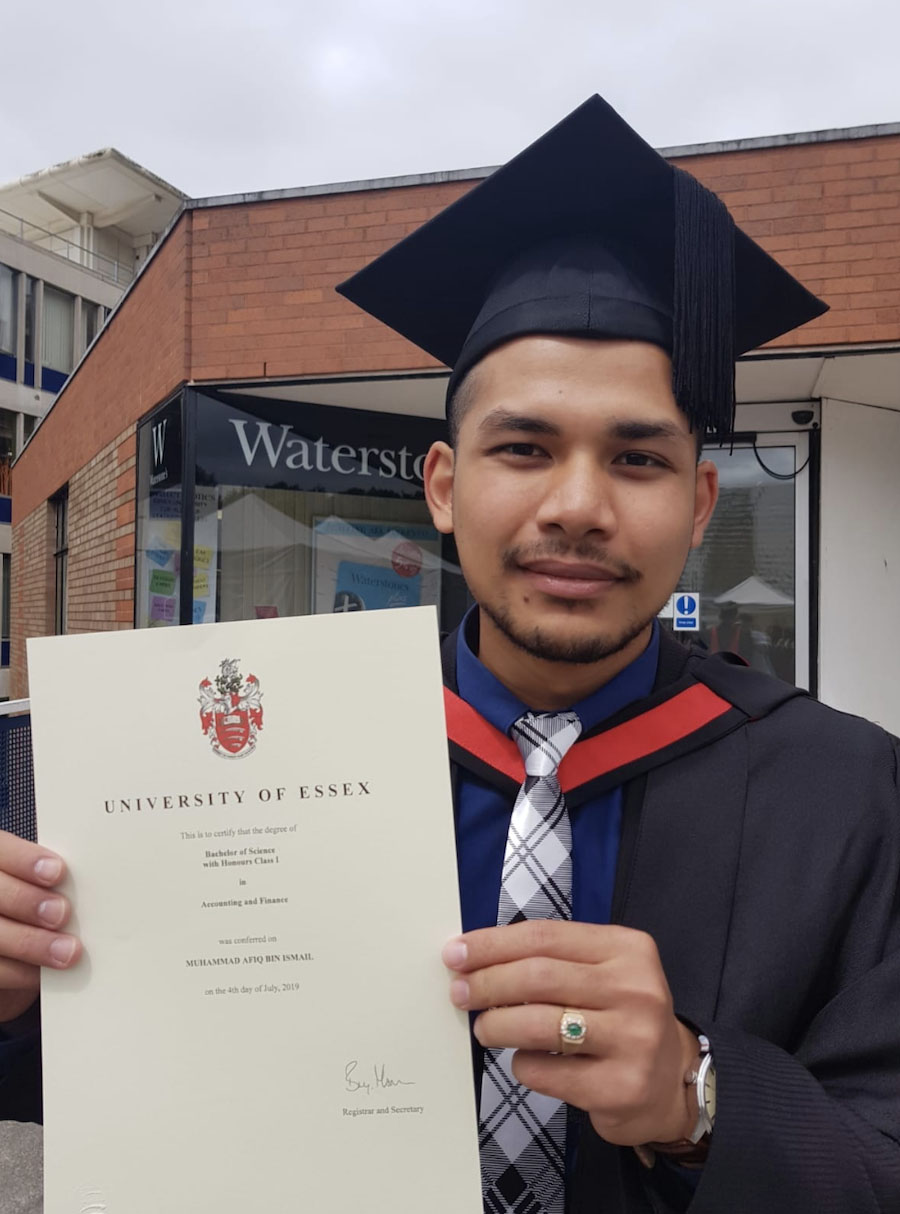 Afiq believes that his success wouldn’t be possible without his parents.

The filial son wishes that he can provide them with more in the future,

I hope one day I can afford to pay for their Hajj trip to Mecca.

Grades don’t have to define your future

It’s hard to get straight A’s from primary school to university but Afiq’s tale proves that grades don’t define our future. While a lot of people believed he would fail, Afiq worked hard and managed to turn his life around.

What’s also touching about his tale is that he never forgot his parents. He remembered how hard they worked to raise him and he used it as inspiration to forge his own path to success.