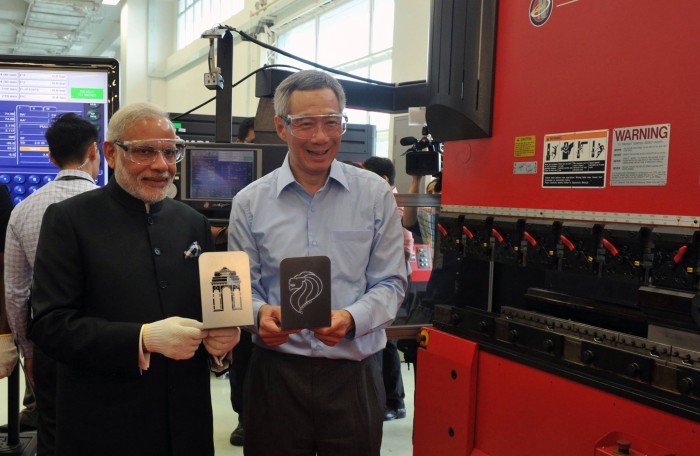 Indian Prime Minister Narendra Modi recently spent a couple of days on our sunny island on an official visit. Of course, Prime Minister Lee Hsien Loong was around to show the VVIP around Singapore.

According to the press release by the Ministry of Foreign Affairs, PM Modi’s schedule was immensely packed — he unveiled a commemorative stamp, delivered a lecture, and even visited ITE College Central.

And PM Lee was with him all the way.

Which made us think: could this be the beginning of a beautiful bromance?

So we looked a little deeper into their interactions, and discovered just how deep this bromance goes

1. When they bro-ed out over supper at Little India

Many Singaporeans head to Little India when feeling peckish for a bite late at night, and PMs Lee and Modi are no different.

Acting Minister for Education (Higher Education and Skills) Ong Ye Kung, was also at the scene, and he provided an absolute behind-the-scenes gem. You’ll see what we mean later.

2. When they both took selfies of their night out and posted on their respective Facebook pages

Of course, they had to take selfies to mark the occasion.

Acting Minister Ong managed to snap this little tidbit of PM Modi figuring out how to take a picture.

But why bring PM Modi out for Indian food though? No disrespect to the good people at Komala Vilas, but we’re pretty sure the Indian food back home is much better. 3. When they tweeted each other like normal human beings

After that little Little India escapade, PM Modi tweeted about his experience and thanked PM Lee for his hospitality.

Of course, PM Lee absolutely had to reply.

.@narendramodi It was a pleasure. – LHL

4. When they were super proud of what they made at ITE College Central

Just look at how these leaders of countries beaming. We’re not entirely sure what those things are, but they look excellent.

After both Prime Ministers signed a strategic partnership, PM Lee presented PM Modi with a copy of the front page of Tamil Murasu on 11 August 1965. That front page is particularly significant, as it announced India’s recognition of Singapore as an independent country, and serves as a symbol of strong Singapore-India relations. 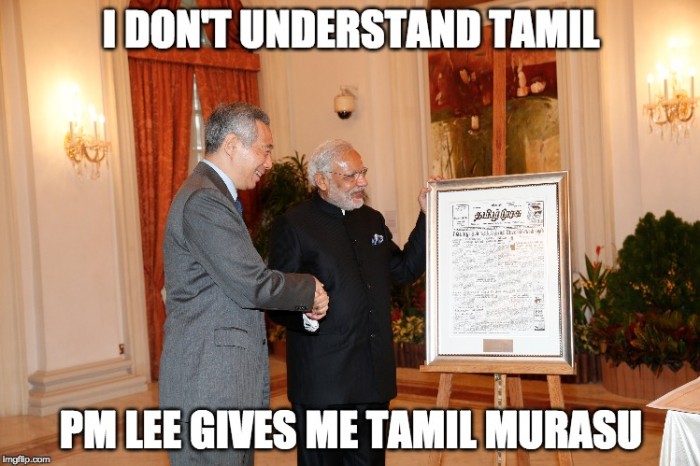 6. When PM Modi returned the gesture by gifting PM Lee with an old map

In return for that old newspaper, PM Modi presented a map of Singapore off the National Archives of India dated 1849.

We can only assume PM Lee frowned at the conspicuous absence of Pasir Ris on the map.

Here’s a closer look at the map:

7. When they both signed a bunch of stuff

Both Prime Ministers signed a grand total of 10 Memorandums of Understanding, which probably means they had to switch pens halfway.

The memorandums covered a variety of topics, ranging from the loan of artifacts, to defence cooperation, and combating drug trafficking.

8. When they unintentionally clasped their hands at the same time

After signing 10 Memorandums of Understanding, both Prime Ministers were understandably pleased with themselves and stood by to look at their handiwork as cameras clicked away.

This pair are such bros they even clasp hands in sync.

9. When PM Lee was super happy for his friend

When PM Modi took office in 2014, PM Lee took to Facebook to congratulate a successful campaign.

The epitome of bromance

These two leaders are so tight, we wouldn’t be surprised if they had their own secret handshake. 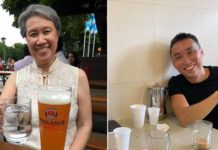 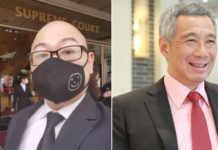